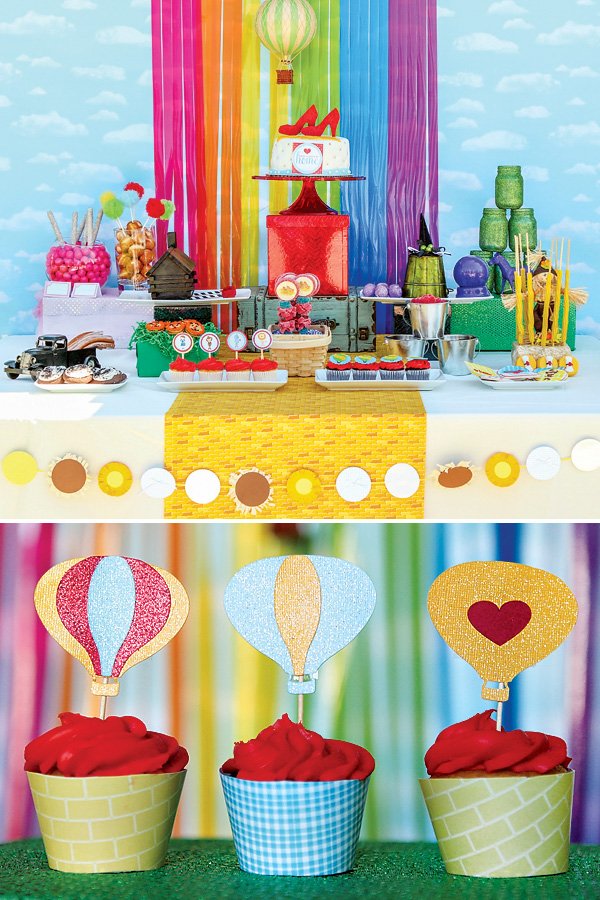 When her sister was coming home from a long trip away, Britni Vigil of Play. Party. Pin. wanted to welcome her back in true Kansas-style with this “There’s No Place Like Home” Wizard of Oz Welcome Home Party! To get everything just right, Britni did some serious recon on the classic film, watching it numerous times so as not to leave out any of the details. The dessert table was cleverly set up in order of the story’s events, so guests could follow along the Yellow Brick Road with Dorothy on her way through Munchkin Land, the poppy fields & Emerald City. With family as thoughtful as this, there really is no place like home! 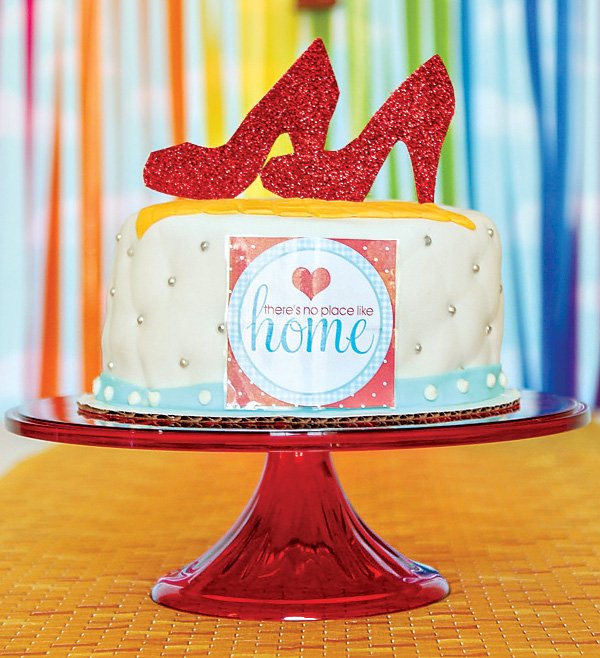 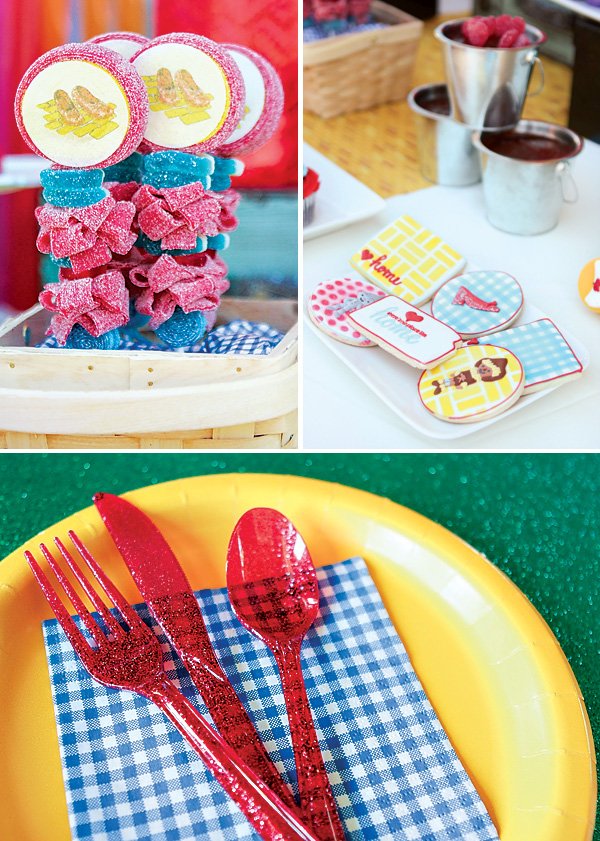 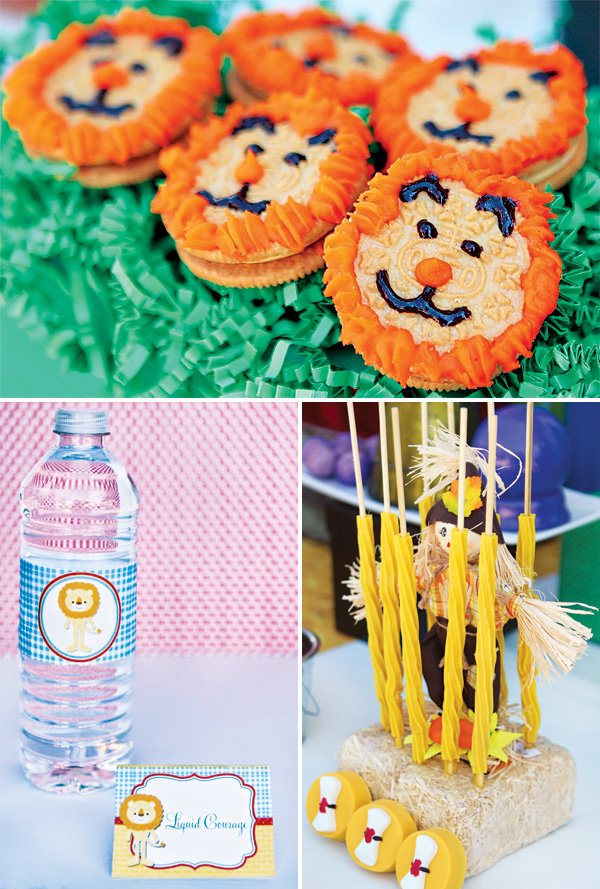 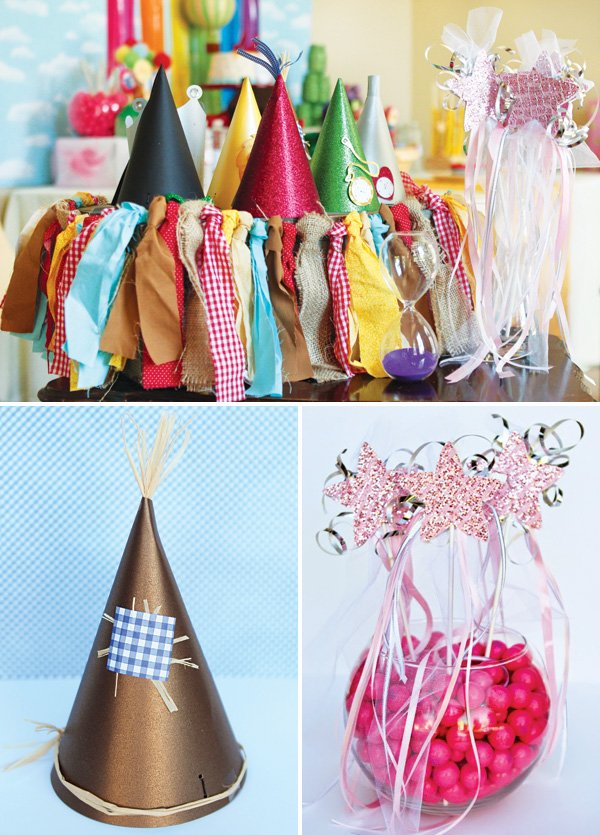 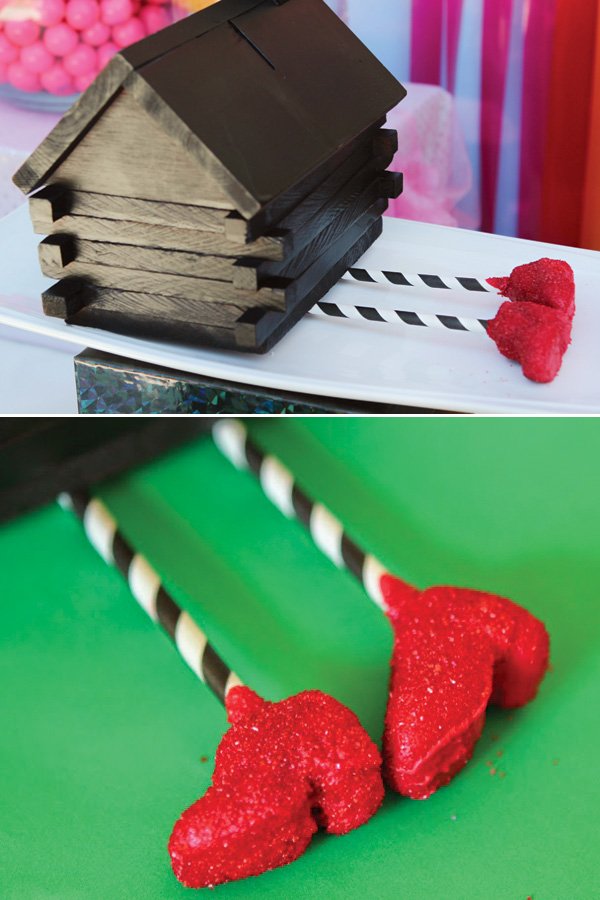 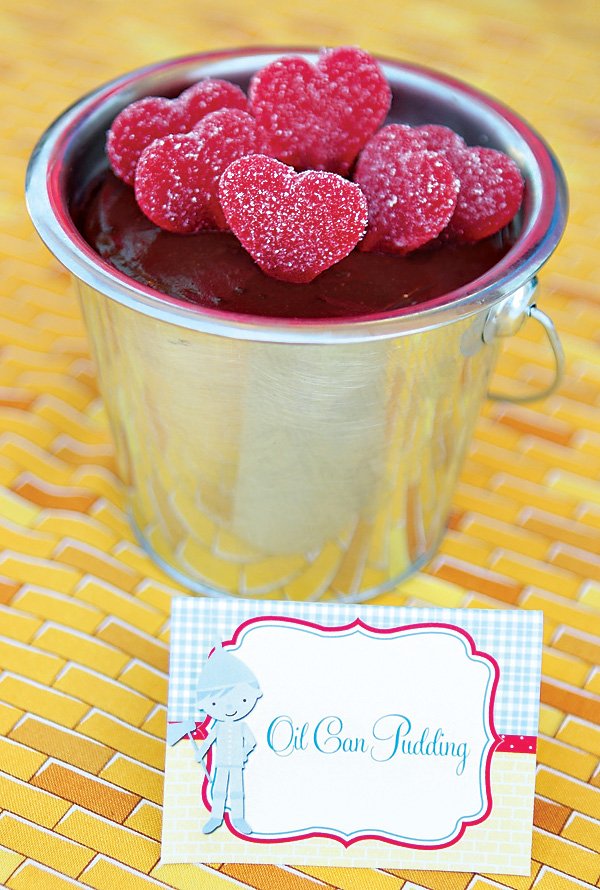 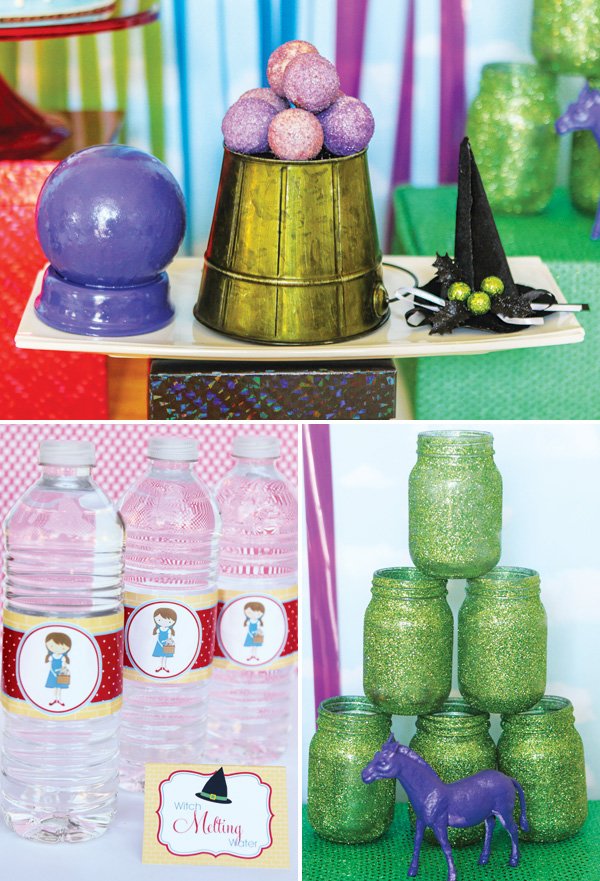 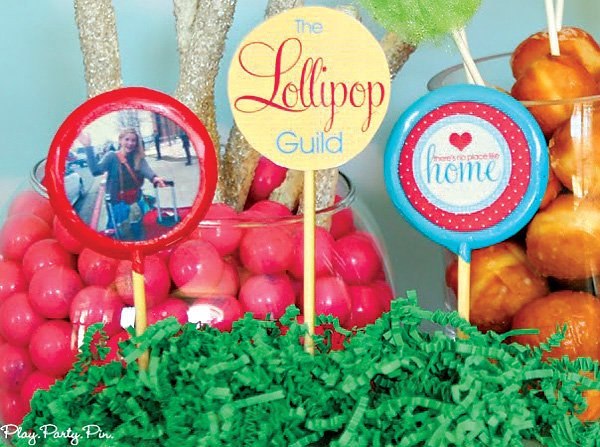 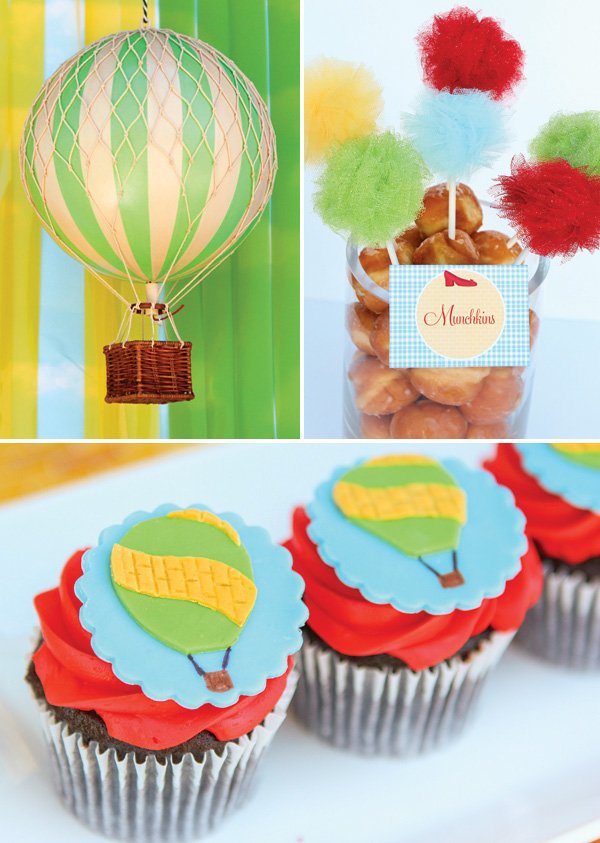 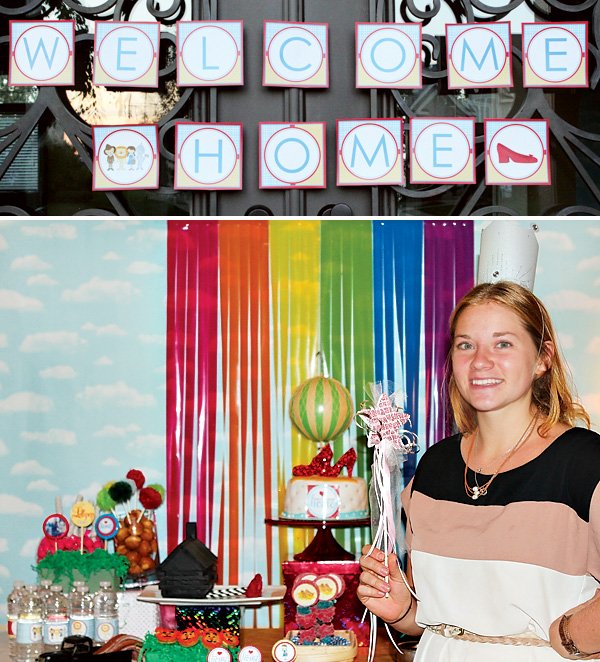 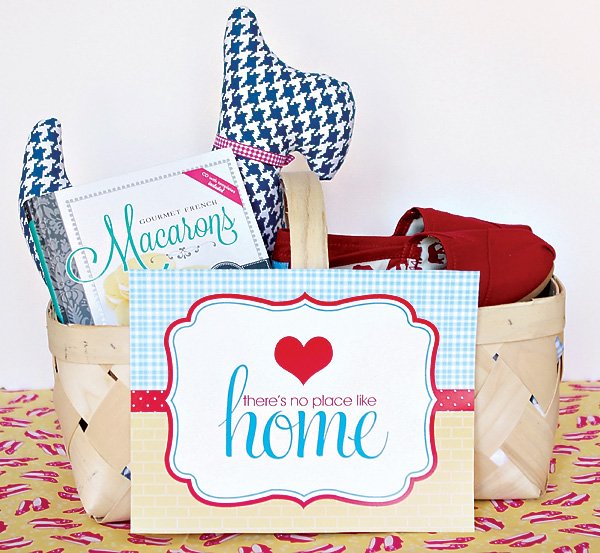 PARTY DETAILS as told by Britni…
:

My sister recently came home from her mission, so I put together a full-scale Wizard of Oz “there’s no place like home” themed party for her. And the best part? She came home to Kansas, so the theme fit perfectly!

As soon as my sister walked in the door, she was greeted with a Dorothy style basket filled with Gourmet Macarons by Mindy Boyce Cone, Toto, and a pair of red Toms, her version of ruby red slippers. Next up, she had to pick out her costume for the evening at the costume table. I decorated a vintage suitcase using an awesome ribbon garland that Tutus and Bowties created for the party. HensonCreations made me an entire set of awesome Wizard of Oz party hats for the party. My sister wisely chose to be the good witch using one of the cute wands from Fancy and Fold.

Since this was a welcome home party, I wanted to put the emphasis on the “There’s no place like home,” so I added a lot of red ruby slippers, hot air balloons, and yellow brick roads — all of the things that were supposed to lead Dorothy home in the movie. All of the designs were done by the incredibly talented Donna from Swish Printables. She has an awesome set of Wizard of Oz printables and made some custom items to go along with my crazy “follow the movie scenes” party plan.

While I was planning out what I wanted on my party table, I watched the movie multiple times and wrote down about a million things that I wanted to include. I couldn’t narrow it down so rather than try, I decided to do a table with sections that represented each element in the Wizard of Oz movie starting in the front with the “black and white” part of the movie. I found the perfect antique pickup truck at a craft store and filled it with Cow Tales. In front of the truck, I put Oreos next to the cutest tornado and storm cloud die cuts from Tutus and Bowties Events.

After the tornado, Dorothy lands in munchkin land and is greeted by the good witch and the munchkins. Sweet U Off Your Feet made sparkly chocolate covered pretzel rods for good witch wands, and I put them in pink bubble (get it, bubble like the good witch’s bubble) gum. Next to the pretzel wands, I put a jar full of munchkin donuts from Dunkin’ Donuts and topped them with fun poms from Fizzy Party in various colors to look like the munchkin hats. I also created a lollipop guild using Lollipics with the “There’s no place like home” design and a photo of my sister saying goodbye when she left on it.

During Dorothy’s time in munchkin land, she finds out that her house killed the Wicked Witch of the East, so we had slippers in the form of delicious cake pops from Pop Culture Cake Pops. I also bought some ding dongs (ding dong the witch is dead!) to go along with the cake pops (they were eaten before the table was ever set up). Sweets Indeed made some fantastic candy kabobs with an edible design of Dorothy’s ruby red slippers and the yellow brick road on them.

Next up in Dorothy’s journey, she meets the brainless scarecrow. I bought a cheap scarecrow at a craft store (hooray for fall clearance!) and fashioned my own little corn field by skewering yellow licorice and sticking the skewered licorice into the hay bale. And in front of the scarecrow, yellow chocolate covered Oreos with chocolate diplomas from CandKSweetShoppe like the one the scarecrow received from Oz for his “brain.”

Next, they meet the Tin Man. I knew I wanted to do something with an oil can and something with a heart. My husband came up with the brilliant idea to serve chocolate pudding in tin cans, and I added little gummy hearts on top. Last but not least, Dorothy meets up with her good friend the Cowardly Lion. My sweet husband drew lion faces out of chocolate onto vanilla cookies, and I just set them on top of some green grass to represent the lion. And next to the lion, his “liquid courage.”

One of the most iconic pictures and scenes from the movie is when the four friends are skipping down the yellow brick road together. I knew I wanted to incorporate that somehow and fortunately, Stacie from Fancy & Fold read my mind and came up with the idea to do a garland for the front of the table that incorporated a piece of each of the characters — tin, blue gingham, lion mane, and straw. I placed it across the yellow brick road fabric to make it seem like they were skipping along together.

And back on the table, Jess Add Sprinkles made the cutest cookies to represent each of the characters. And darling Kansas shaped cookies with the “There’s no place like home,” sign to go along with the theme.

Along the yellow brick road, Dorothy and friends end up in a poppy field. My poppy field consisted of the same bright red cupcakes I used for my sister’s favorite things celebration. Topped with cupcake toppers from Swish Printables, they added the perfect “pop” of color.

Next up, Dorothy and friends make it to the Emerald City, or in my case, a tower of gorgeous green glittery jars from Always the Occasion. And I had to include the purple horse they ride in on of course. Oz sends them away and tells them to go get the broomstick from the Wicked Witch of the West. The witch watches them closely with her purple magic ball (cake balls anyone) and eventually Dorothy melts the witch with a bucket full of water, or in my case, bottles of witch melting water.

The friends return to Oz who leaves them high (literally) and dry in a hot air balloon. So we had the most perfect cupcake toppers from 4 Kids Cakes that incorporate a hot air balloon and a yellow brick road. I also added some glittery hot air balloon die cuts from Tutus and Bowties to the top of the rest of the cupcakes to add a little more sparkle to the table.

Last but not least, Dorothy makes her way home, back to Kansas, by clicking her slippers and saying “There’s no place like home.” And those slippers were represented in a huge way with the gorgeous cake from Jennifer at Mixing It Up, one of my favorite bakeries in Kansas. It was the perfect centerpiece to the table, and I love that she incorporated the design from Swish Printables into the cake.

Behind the table, I used cloud wrapping paper topped with a rainbow colored curtain that I picked up from IKEA. And to top it off, I ordered this hot air balloon to tie it all together. And I put out place settings that matched the fabrics and patterns I used for the party.

And that’s it! We were going to play this fantastic ‘Give the Tin Man His Heart’ game from PartyPlanItDesigns, but my sister’s flight was delayed so we ended up getting in too late to play. It’s the perfect addition to any Wizard of Oz party!