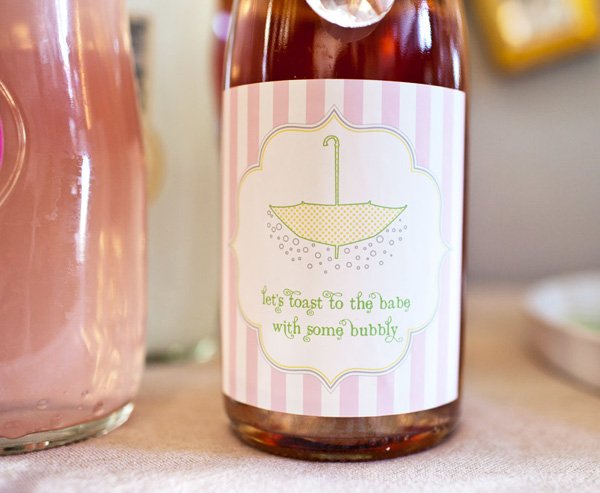 The oh-so-talented Paige from Paiges of Style is back with an incredibly charming & fresh “BABY SPRINKLE” that she recently hosted for a close friend. This entire party has such a lovely, springtime feel to it – from the sweet color palette of pale pink, green & yellow to the {real!} grassy table runners adorning the food & dessert tables.

One of the first things to catch my eye was of course the fabulous upside-down kids umbrella suspended over the dessert table with “raindrops” (a.k.a. clear glass ball ornaments) sprinkling down! That artistic display tied in so nicely with the pretty stationery details, which included invitations, bottle labels, and cupcake wrappers that also donned a chic umbrella/raindrops motif. {P.S. All of these paper elements are available in Paige’s etsy shop!}

Read on for lots more gorgeous images {as captured by Carly Taylor}, plus all the pretty – and surprisingly budget-friendly! – party details from Paige…

A longtime girlfriend of mine is pregnant with her second baby. She is one of those patient gals {unlike me} who doesn’t find out the sex of the baby ahead of time, but I still felt that incorporating some pink into the theme was appropriate rather than sticking with the usual “gender-neutral” green & yellow. The mama IS a girl herself after all!

I didn’t want the sprinkle {ie. a small shower typically for a second baby} to feel too themey so I incorporated the umbrella into the invitation and decided that the umbrella & rain drops were going to be my theme.

I knew I wanted the focus of the shower to be on the dessert table and that I wanted to mimic the upside down umbrella and rain drops from the invitation. I think scale is really important when designing dessert tables (which is something that I have learned from being an interior designer) so I started with a KIDS size umbrella found on Amazon and found clear Christmas ornaments at a local florist supply. I was able to a package of 10 ornaments for around $3 and used less than 2 packages.

My new favorite backdrop for dessert tables is finding a shower curtain to match the color scheme of the party. These are my favorite for a couple of reasons. First, they are 72 inches wide rather than the standard fabric width of 45 or 54 inches so it covers the whole width of most tables. Second, they are already hemmed for you and even have loops at the top so you can easily secure it to a rod to hang without having to break out the sewing machine. And last but not least, you can’t beat the $20 price tag for something that you can reuse in the future. I fell in love with this floral shower curtain from Target and knew it was perfect for this party!

I reused the tablecloth from Charley’s monkey themed party and started building the table using only pieces that I already owned. I really wanted to focus on hosting a stylish an intimate shower but it HAD to be done on a budget.

One of my favorite elements of the party was using sod on the dessert and food tables. It really made the shower feel like springtime and feel so fresh! Plus, it only cost $2.50 for the piece that I used on the table. Over the past few years, I have started collecting dishware, platters and cake stands. I think it’s smart to invest in neutral pieces that can work for any theme and it finally paid off. I didn’t have to buy even one new piece for this party. Hallelujah!

The mini pies in mason jars were a piece of cake {or pie} using premade pie crust and frozen mixed berries from Trader Joe’s. I scrapped the bottom crust of the pie at the last minute and decided to just use a top crust, they were so tasty and couldn’t be easier. You can view a tutorial I did for these here.

I’ve always loved rainbow layer cake and thought this was a perfect cake to make myself since it doesn’t require frosting on the outside which I couldn’t perfect on my own. Plus, I knew I needed some desserts that required little to no effort – so I ordered a dozen cupcakes at Albertson’s and took them a sample of the pink I was using so they could match it perfectly. They were a steal at $6.99 per dozen! I dressed them up with simple cupcake wrappers.

A tower of Hostess donuts was adorned with wafer paper flowers from Sugar and Stripes Co was so easy and looked charming. The edible image sugar cookies were a hit and were made by Baked. Nanci is a dream to work with! I simply emailed my design to her and she created these gorgeous and HUGE cookies. Plus, she ships nationwide.

The food from this shower was incredibly simple but was loved by the guests. I served a DIY mac and cheese bar. I made mac & cheese and provided various toppings so each guest could doll up their mac and cheese to their liking. The toppings were bacon, blue cheese, green onions and some more extra sharp cheddar cheese. I also served a delicious arugula and avocado salad.

I wanted to keep the drinks simple, so I served rose champagne and a variety of sparkling lemonades. I dressed up the bottles with some crystals from my daughter’s chandelier and created some custom labels for the champagne bottles to match the decor.

Another element I especially loved from this party were the custom straw flags with each guests name. These served a double purpose; many of the guests didn’t know each other, so these served as both drink markers and helpful “name tags” for socializing!

I created this whole party on a serious budget. The total cost for the whole event was less than $200. I am selling the etsy package with all of the printable paper goods for $30 because I want others to be able to host a similar shower on a budget!