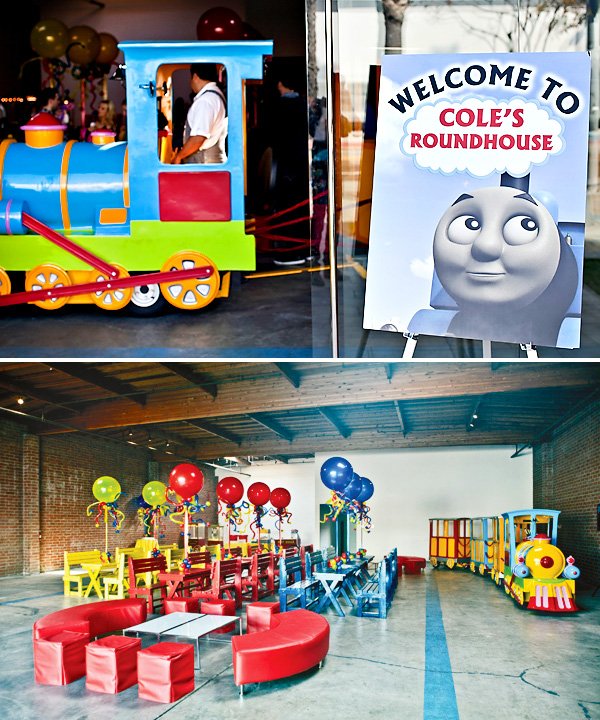 Inspired by her son’s love for trains, Jaime from YourBASH! created one super fun RIDE for his birthday celebration this year… and for all of his pint-sized PARTY TRAIN passengers too!

In addition to taking a ride on the adorable “Mini Express”, guests got to “stop” at fun Temporary Tattoo and “Make a Balloon” STATIONS. And speaking of balloons, there’s some seriously crazy-cool balloon art going on at this party… from the balloon artist’s creations to the fabulous giant balloon centerpieces, which really helped to fill the space and create a playful, kid-friendly vibe. Other favorite details include the train-shaped lollipop favors, napkin rolls embellished with “Chew Chew” printables, and water bottles labeled “Chugga Chugga“! I also love how the carnival-inspired food stations were lined up in a manner to look like a train… very clever! ;) 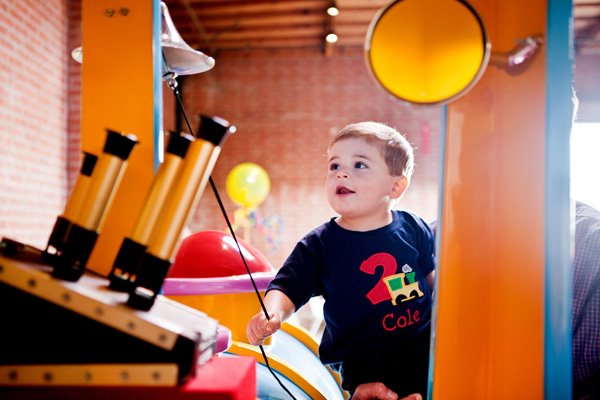 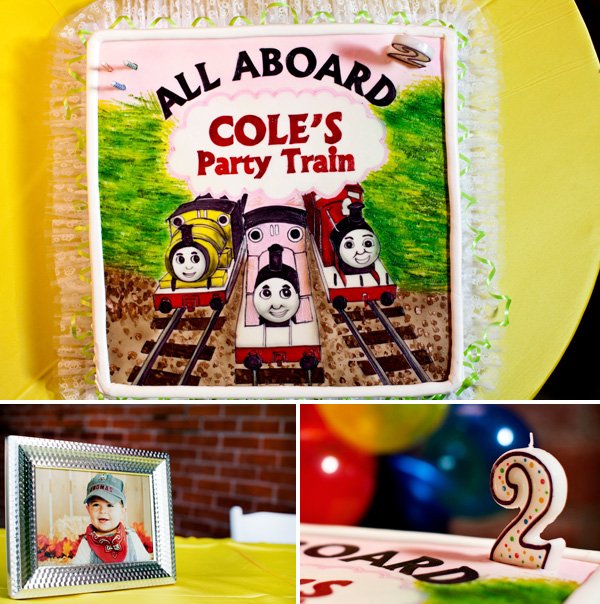 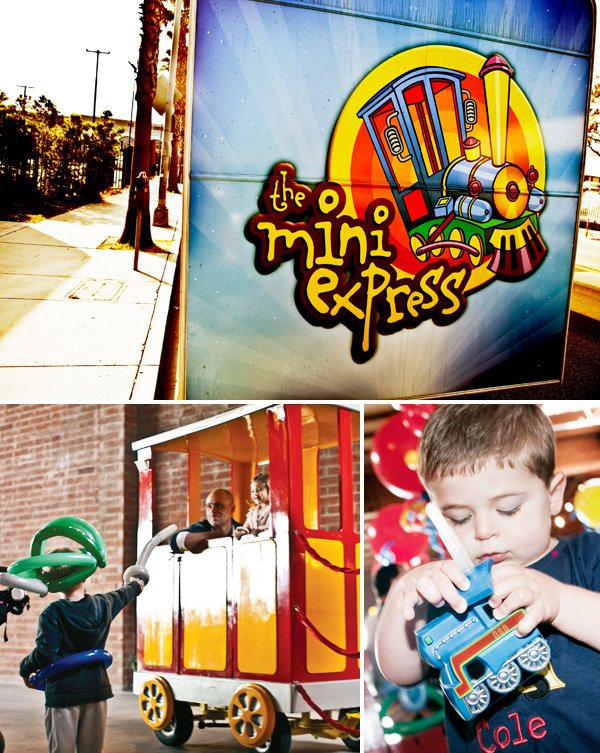 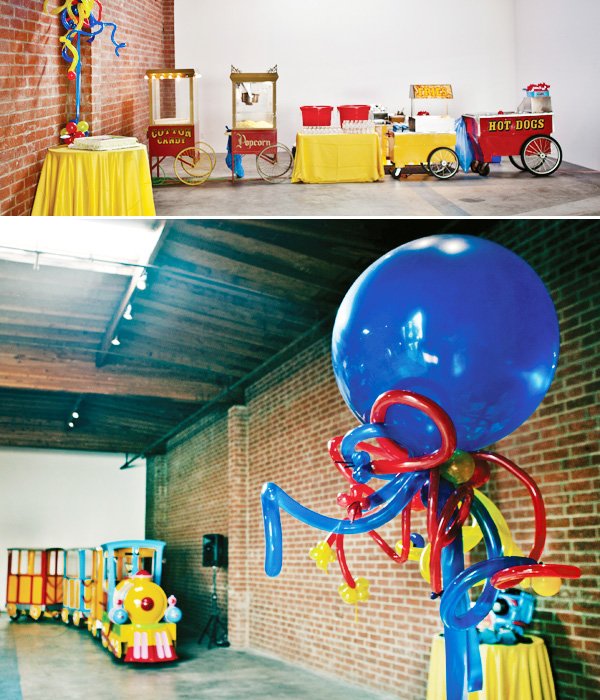 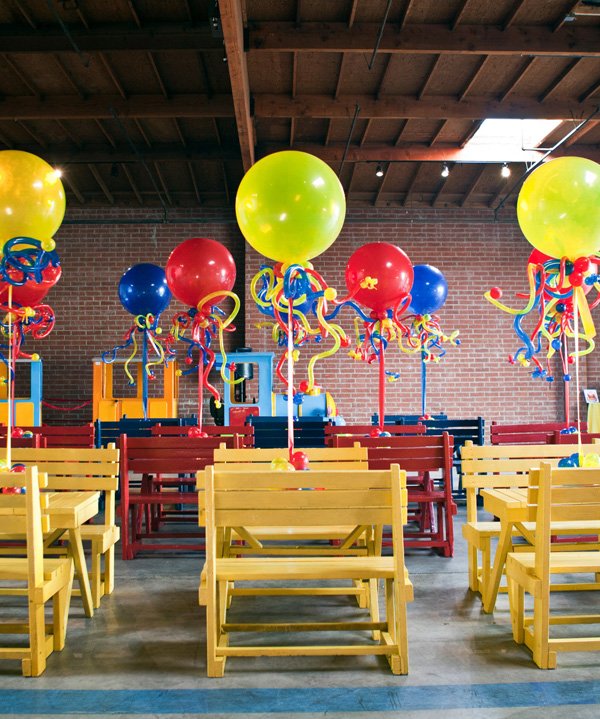 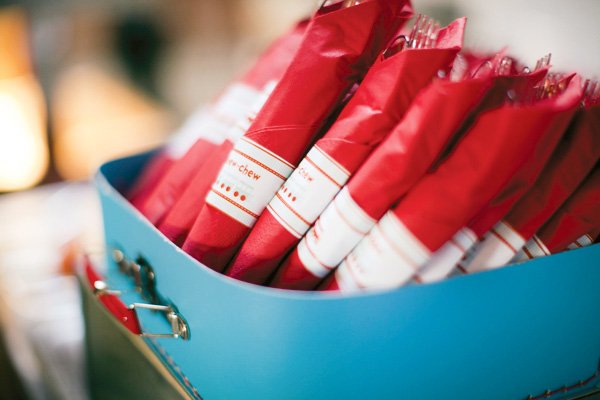 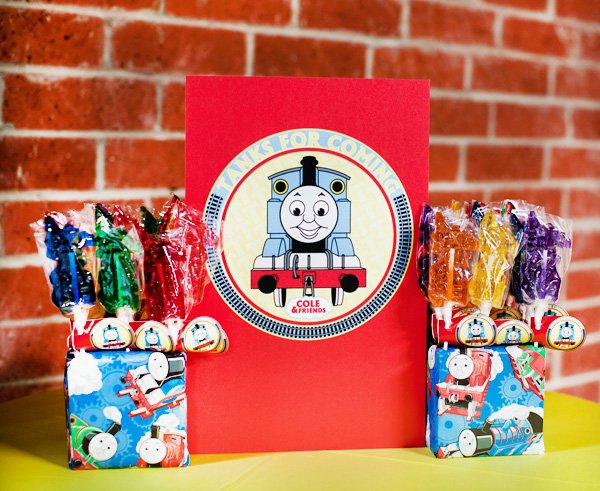 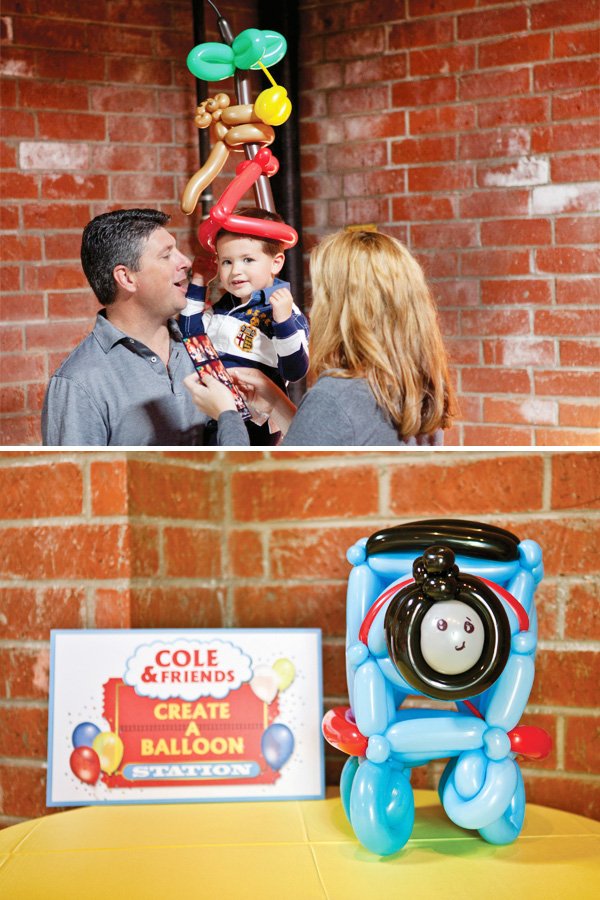 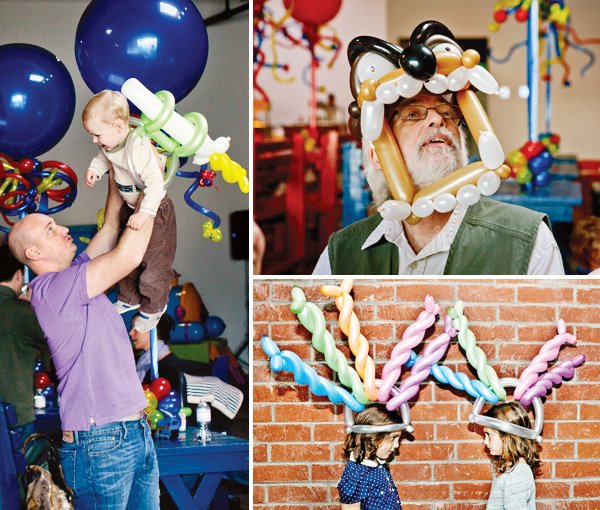 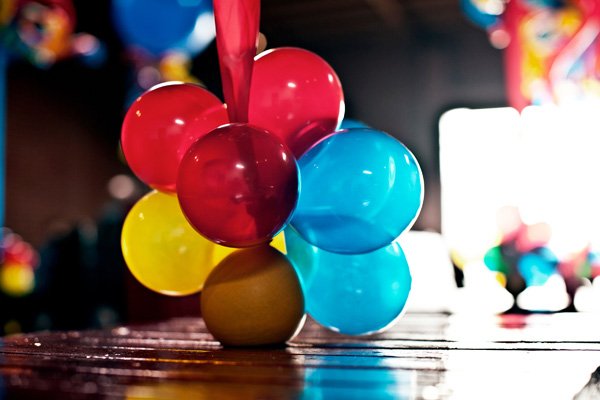 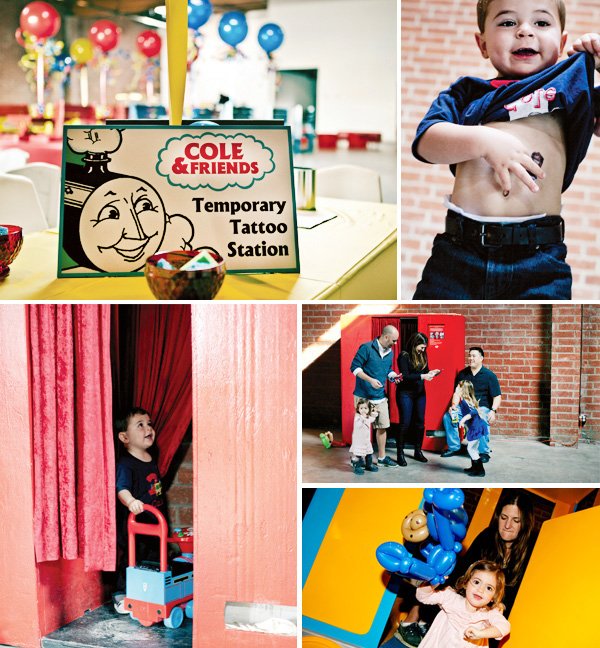 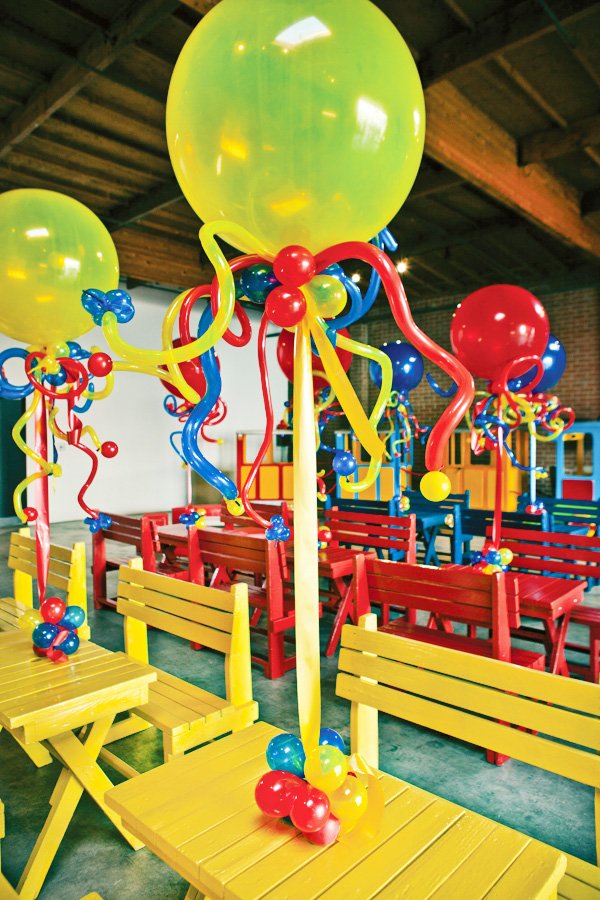 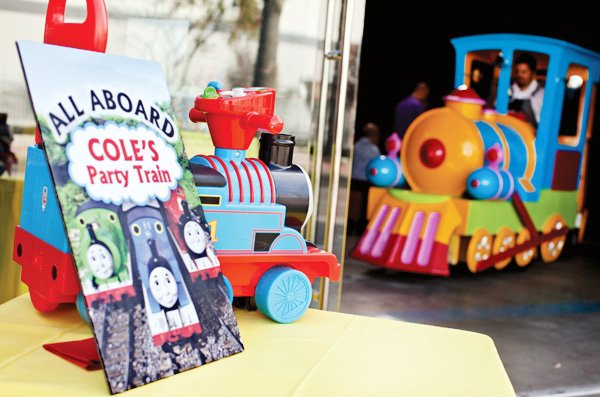 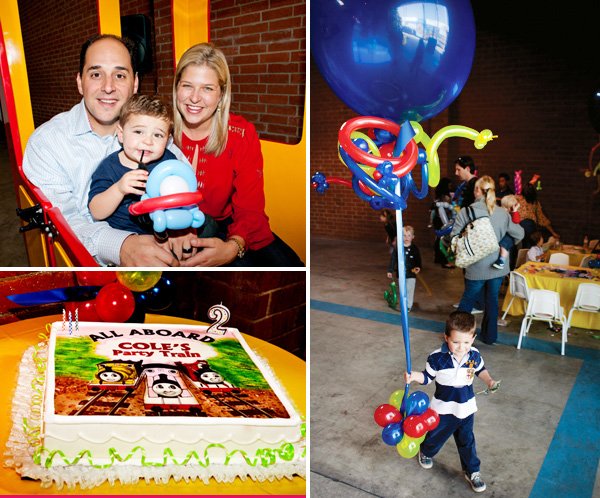 Cole’s 2nd Birthday Party was the perfect way to celebrate for a boy who lives and dreams trains! Guests were invited with a “train ticket” invitation and welcomed to come “All Aboard” to Cole’s Roundhouse.

Once everyone arrived at the venue, they were greeted with a large custom sign for Cole’s Roundhouse and an array of colorful balloon bunches and bright colors. With half the guest list being children, we wanted to make it a casual and fun environment. There were big picnic benches for seating, as well as some couches and coffee tables for the adults. The food was a fun mix of carnival type food with  hot dog, french fry, popcorn and cotton candy carts. Everyone picked up a bright red napkin roll with a cute printable that read “Chew Chew” and a water bottle that read “Chugga Chugga”. The cake was a delicious custom airbrushed Hansens marble cake, which the birthday boy truly enjoyed.

Everyone was welcome to take unlimited rides on the Mini Express train that circled the inside of the venue and created tons of smiles. There were also activity tables inside where the kids could get temporary tattoos, decorate their own felt train with all sorts of goodies, color a train coloring sheet and get a custom made balloon animal or anything they chose. It was an action packed 2 hours of excitement and stimulation!

As guests were leaving, they stopped at the photo booth to get a shot with their gang and picked up a sucker as they left with a label that read “Tanks for Coming”.

Cole rode the train most of the day but still managed to find time to get a temporary tattoo, several photo booth shots and eat a ton of cake!