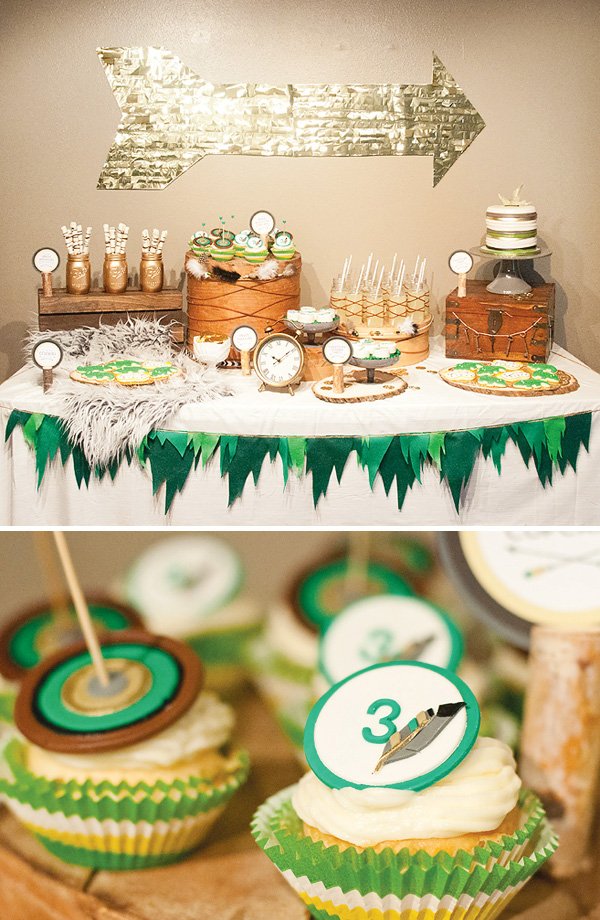 For everyone who loves those adorable girly fairytale parties, but has a little boys birthday to plan, this is one party you won’t want to miss! Inspired by Peter Pan, Robin Hood and The Big Bad Wolf, Elissa of One Stone Events designed a Feathers and Arrows Birthday {Boys Fairytale Party} for her lucky little Benjamin’s 3rd birthday! Fantastic printables by The Frog Prince Paperie plus amazing contributions from a huge group of talented vendors brought the magic for this green and gold clad party! 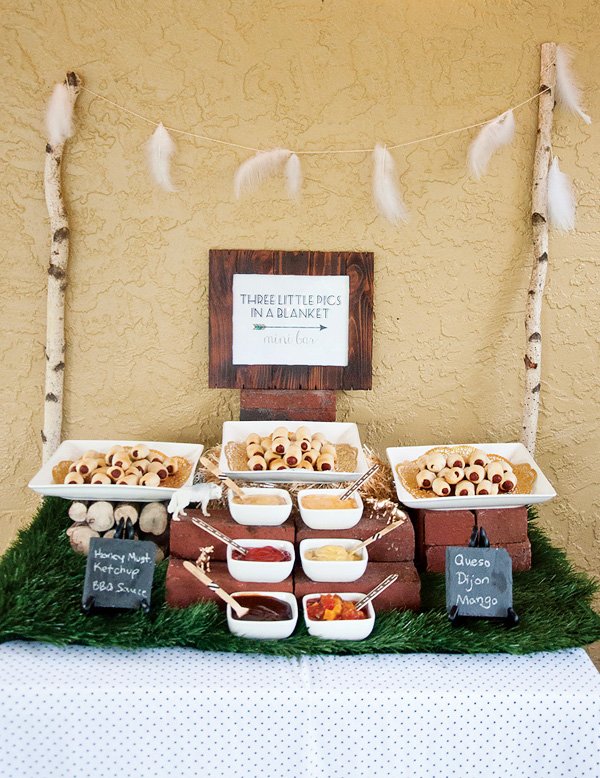 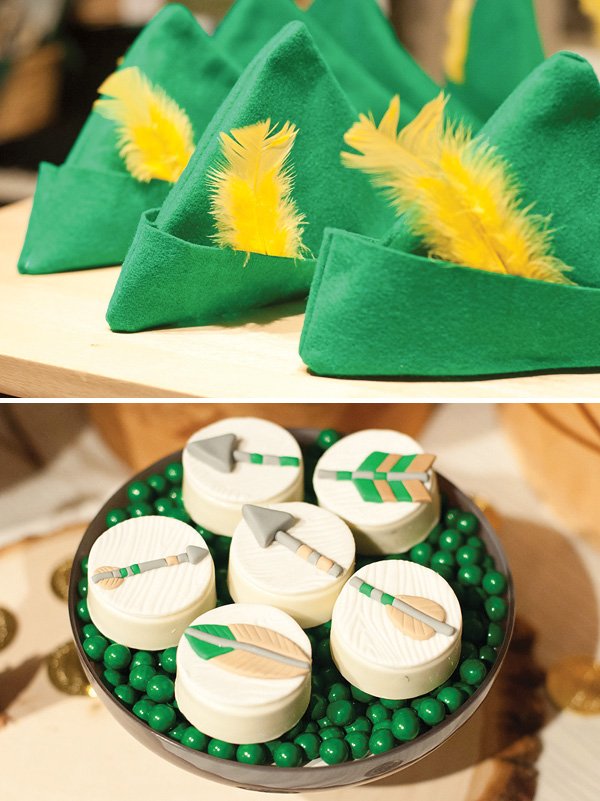 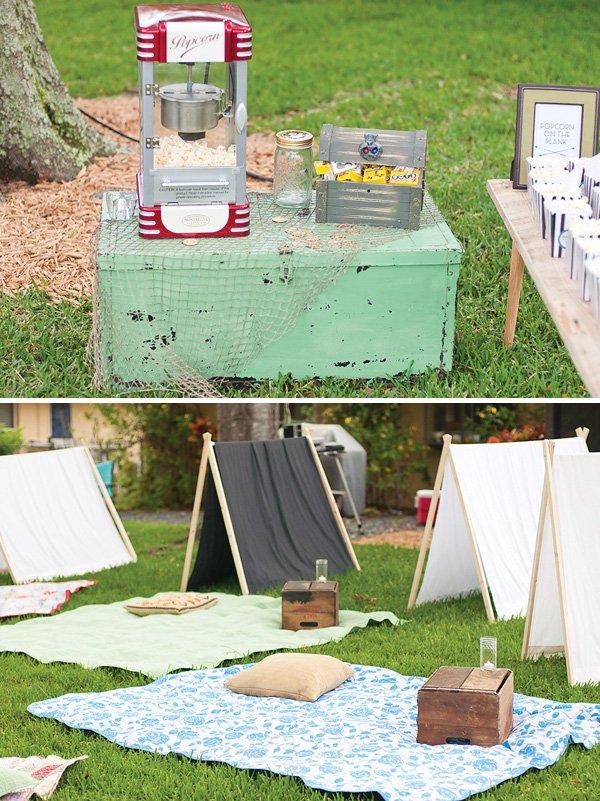 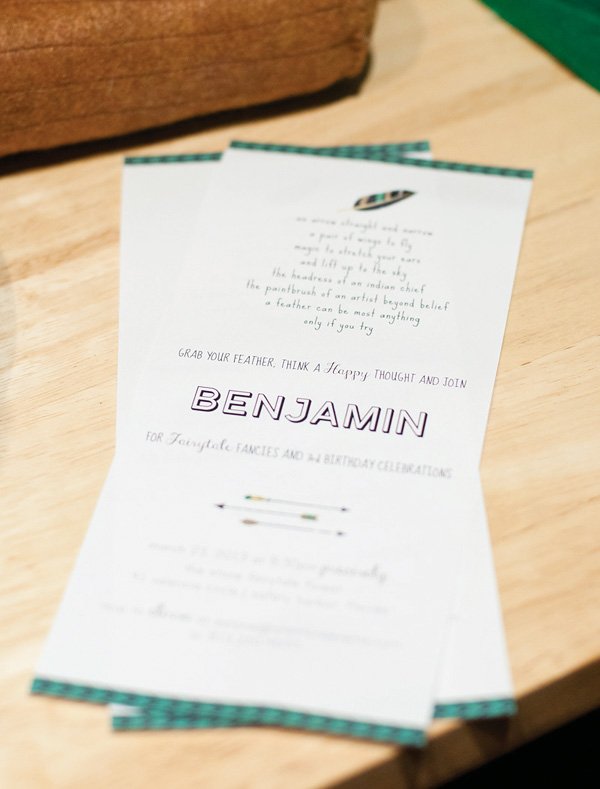 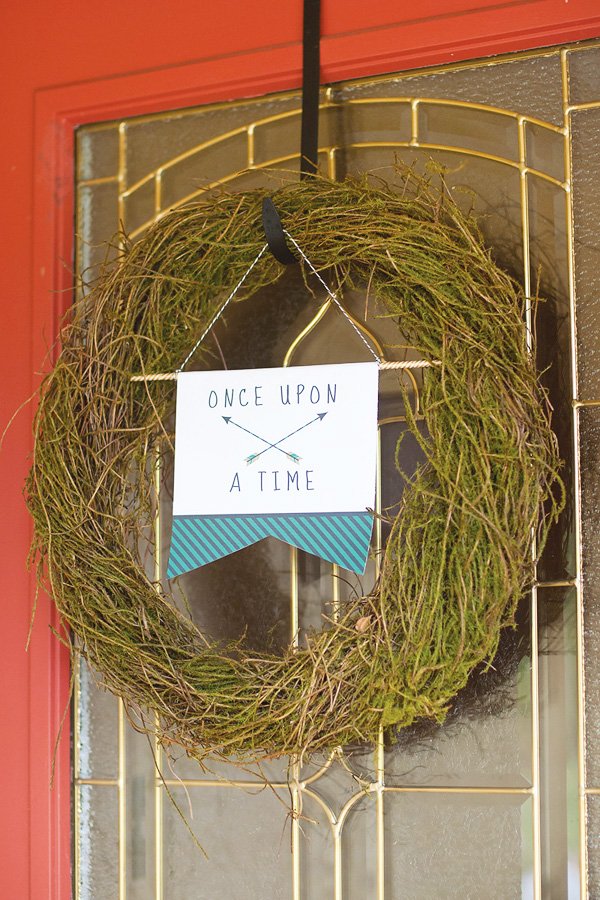 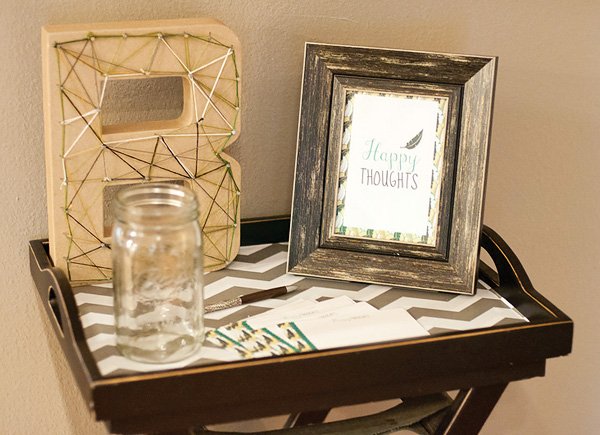 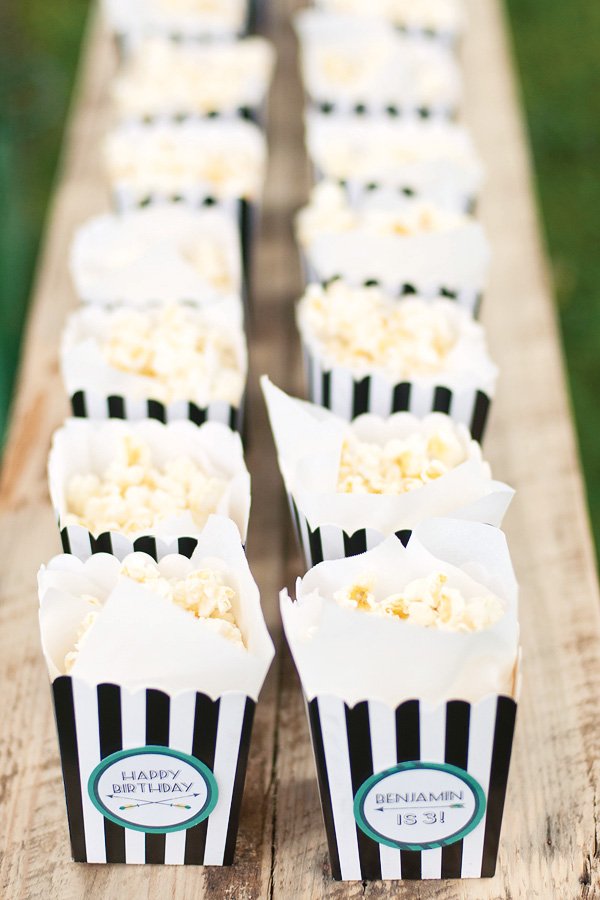 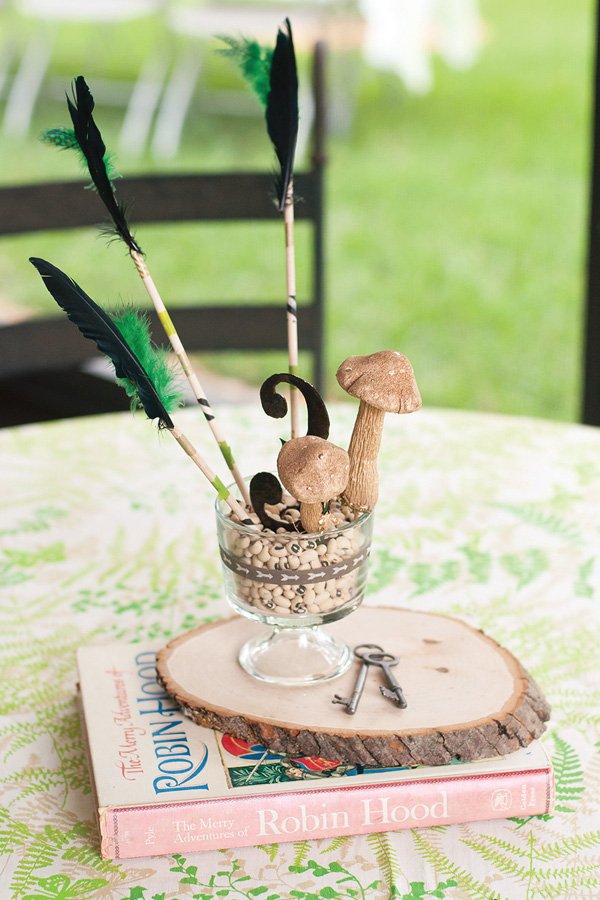 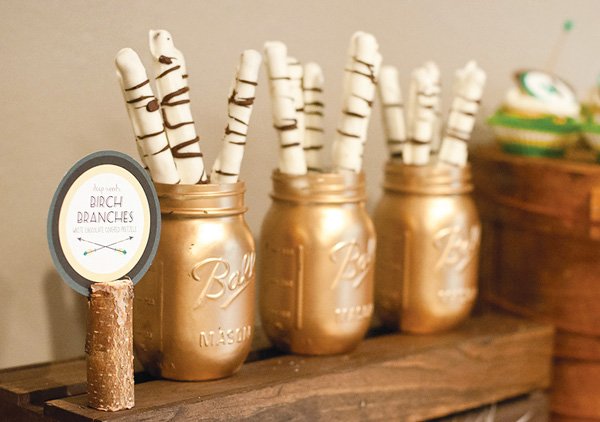 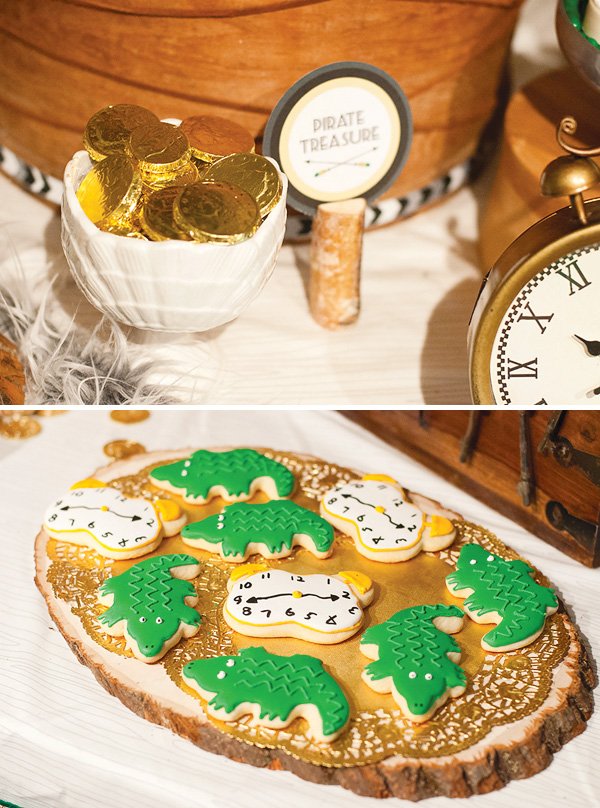 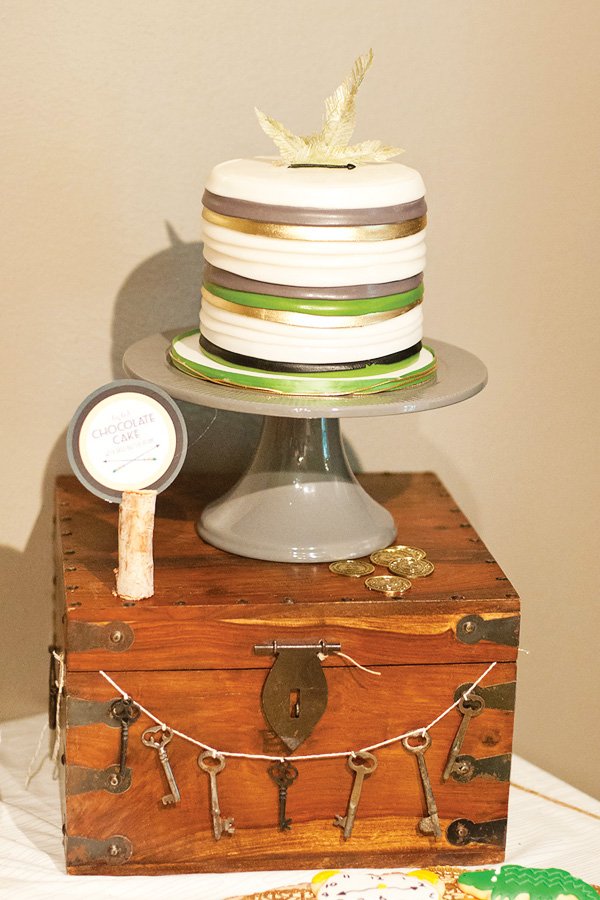 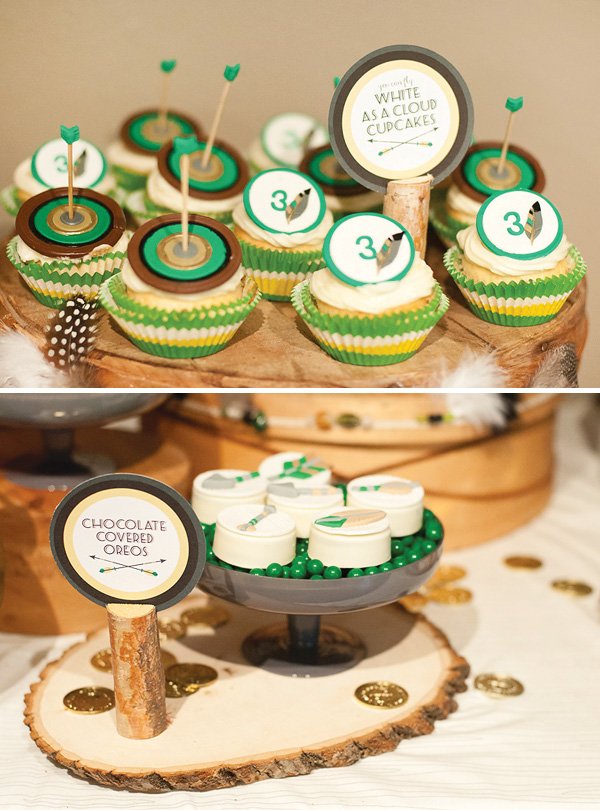 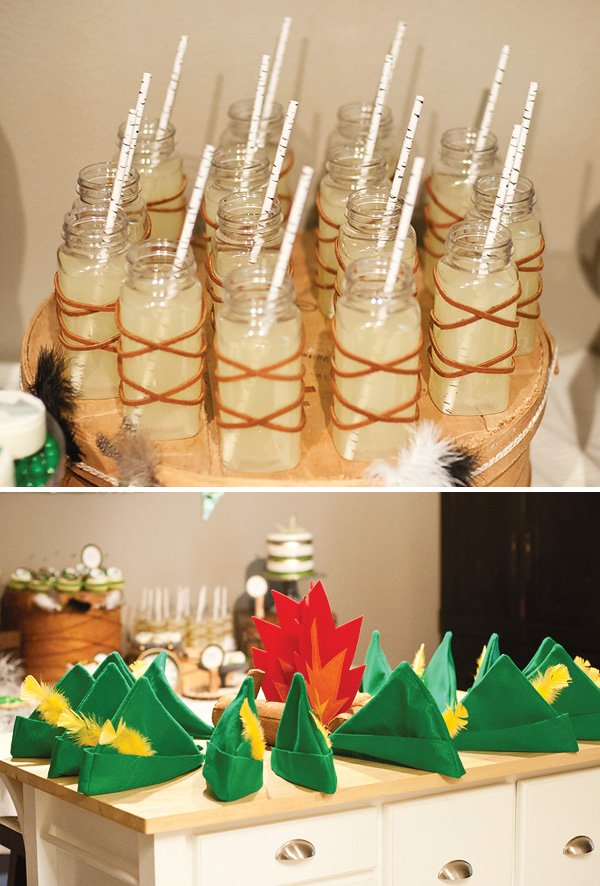 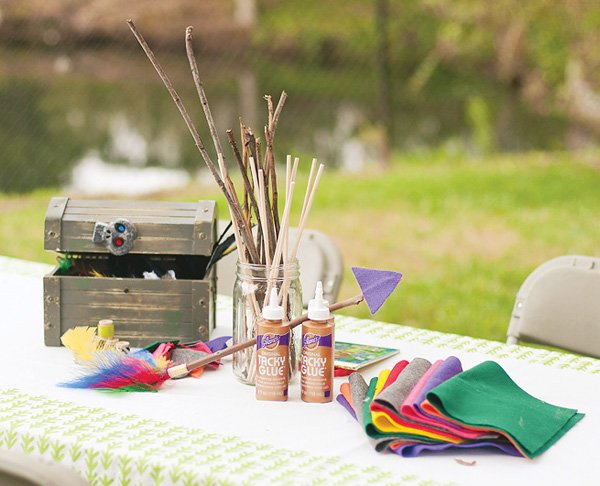 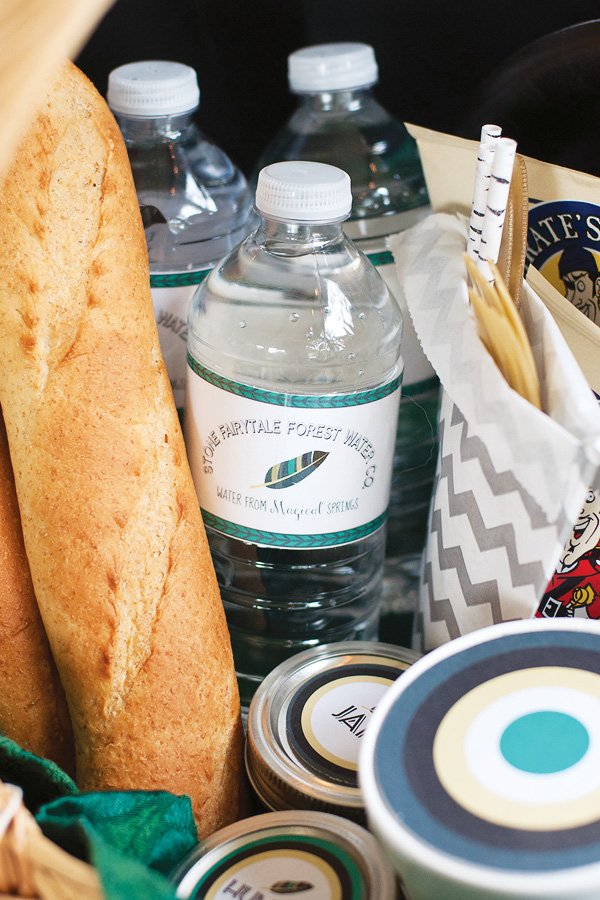 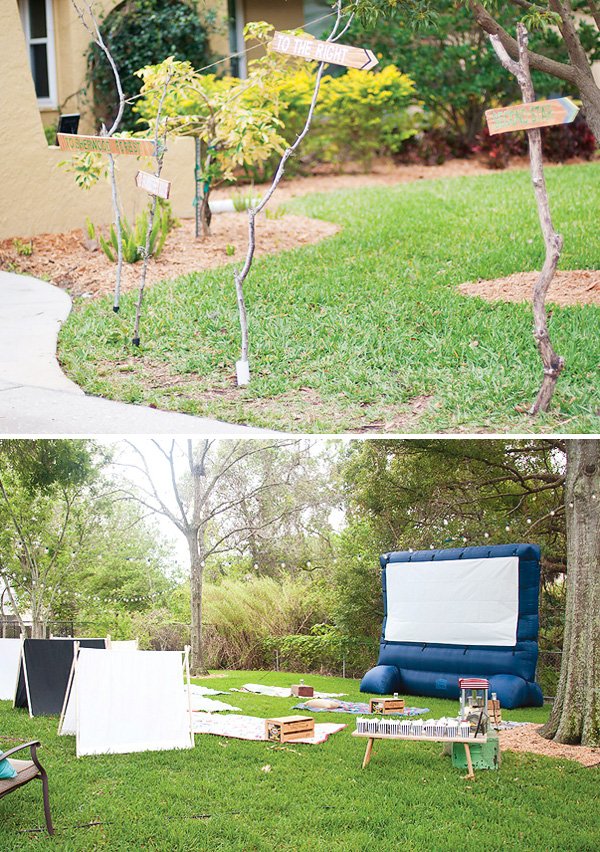 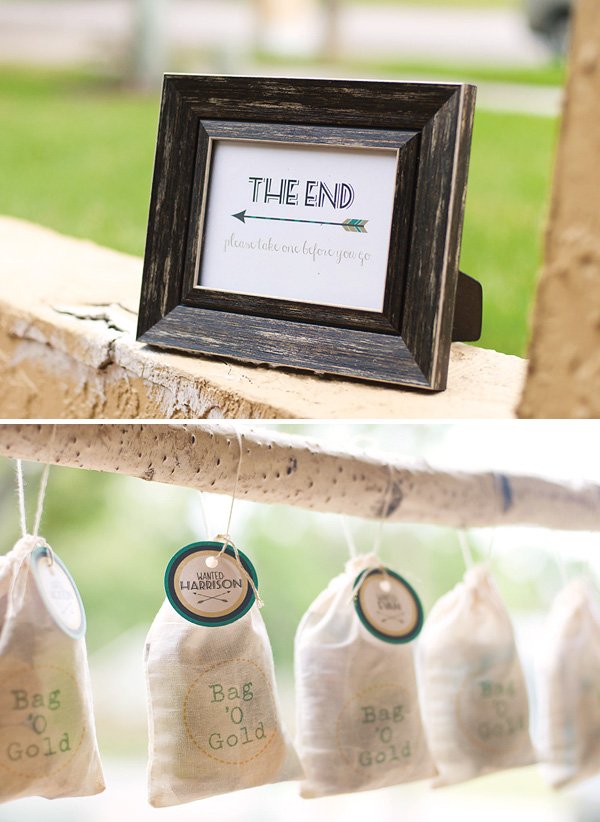 This is an example of how to have a themed party without being so literal. I wanted to style a party that was in line with current trends but with a kid twist, so I chose a boy fairytale party mashup, including Peter Pan, Robin Hood and The Big Bad Wolf  (represented both by Little Red Riding Hood and The ‘3’ Little Pigs.) It definitely has kid elements, but with a sophisticated style to please all ages. Since my son LOVES movies so much, I decided to add a backyard movie element to the mix. We showed Peter Pan. Since blankets were part of that spin, a picnic was the perfect way to go for the meal.

Some favorite details include:

The experience began for guests when they received a message in a bottle invite.  All the printed materials, by Paula at The Frog Prince Paperie, had a cool modern vibe. The design was the perfect inspiration for many of the party details. It was exactly the style I was going for and Paula nailed it! My guests said it was the best invite they’d ever received.

The color palette was black, white, gray, emerald green and gold with design elements focusing on feathers, arrows and targets.

ENTRANCE
Guests were greeted by a giant green balloon and rickety signs up the walkway, made by LGTPS (Let’s Get This Party Started). There were 4 signs, reading ‘second star’, ‘to the right’, ‘to grandmother’s house’, and ‘to Sherwood forest’, representing all 3 of the characters in the mashup. The wreath had a fun sign saying ‘once upon a time’ to lend to the fairytale feel.

DESSERT TABLE
While I had the vision for this party and executed and styled it, it was the team of vendors who made all the items I dreamed of come to life. The backdrop for the dessert table was a gold fringe arrow by The Flair Exchange. I wanted something very fresh, modern, bold and simple. The ‘drums’ on the table were cheese boxes, rented from Wish Vintage Rentals. I wrapped them with leather twine and added some beads, ribbon and feathers to make them look like a drum. The drink bottles filled with lemonade were made to look like the front of Robin Hood or Peter Pan’s shirt with the criss-cross leather ties. The birch straws were an exciting new twist on the stripey straws! I told Nikki at Tikkido that I wanted a bunting that looked like Pan’s skirt and sent her a photo of something I cut out as an example. When hers arrived in the mail I was blown away. She took my vision to the next level and created something more beautiful than I ever could have. It was perfect!

The food at my parties is always a challenge because the birthday boy has a severe peanut allergy, so it’s imperative that the food is as safe as can be for him. Most everything was safe for him to eat. The crocodile and clock cookies were made by Nut Free Sweets and it was my first time working with them. Great experience! The chocolate covered Oreos by Love & Sugar Kisses were the biggest hit and Maria went above and beyond to make sure these were safe for my son.  The faux bois detail on those was amazing! The beautiful fondant toppers were by Edible Details and the gorgeous cake was by Dream Cakes. And that chocolate cake with Oreo buttercream was probably the best I’ve ever had. My mom and I made the cupcakes and ‘birch logs’ (using peanut safe chocolate) and the chocolate coins were from Vermont Nut Free.

PICNIC
A friend of mine recently had a party with picnic baskets and I loved the idea, so I decided to do something similar. Each family had their own basket with a custom tag by The Frog Prince Paperie. All the food items had beautiful printables to identify and coordinate each item. There were French baguettes with jam, hummus, brie (wrapped in parchment with a gold sprayed sword), pasta salad, pirates booty, water, bags with cutlery, plates and cloth napkins in each basket. The best part was, each family got to take their basket (and leftovers) home with them, eliminating a lot of party cleanup!

There were tents (by LGTPS), blankets, pillows and crates (for tables) for the guests to dine on. It created just the casual, relaxed atmosphere and environment I was going for. Guests ‘camped out’, sharing blankets and watched the movie later in the evening from their own little spot.

There was also a concession area with popcorn and movie candy.

3 LITTLE PIGS IN A BLANKET MINI BAR
This was the last idea (and one of my favorite details) I had, just a few days before the party. I put a bunch of different dipping sauces out and the platters of pigs in a blanket sat on ‘wood’, ‘straw’ and ‘bricks’ (each representing a little pigs house). I also spray painted 3 pigs gold to add a little more sophistication and keep them in the color palette.

CRAFTS
There were 2 craft areas: One table had all the supplies needed for the kids to make arrows…sticks, dowels, feathers, felt triangles, washi tape, glue and scissors. The other craft (not shown) was giant black paper for each child to trace their ‘shadow’ and cut out.

FAVORS
The ‘bags of gold’ hung from a birch log with a sign at the exit which read ‘THE END”. They were filled with a pirate eye patch, pirate tattoos, fairy stickers, chocolate gold coins, crocodile soap, rice krispy treats and fairy fruit snacks.

PARTY HATS
Another great detail, made by Nikki at Tikkido, were the adorable Robin Hood hats. The kids loved them.

GUEST BOOK(S)
There was a wood painted target on the tree for guests to sign, made by LGTPS and ‘happy thoughts’ for guests to write and put in a jar for the birthday boy.