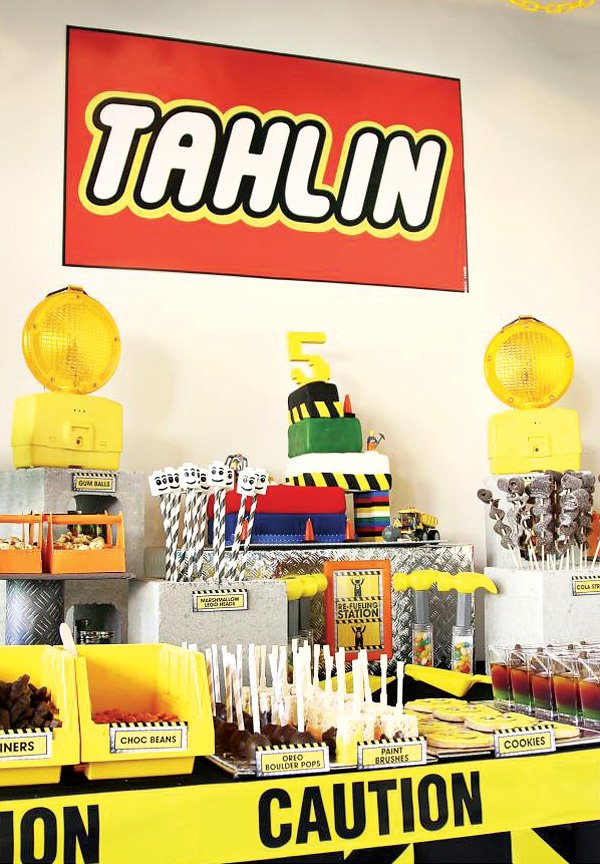 Hold onto your hard hats because Daneve Frankish of Ah-Tissue built an AMAZING Lego Construction Party for her son Tahlin’s 5th birthday! With creative construction zone activities like build your own pizza and a lego car race, the “hardworking” party guests refueled on Oreo boulder pops, traffic cones and a homemade lego cake! 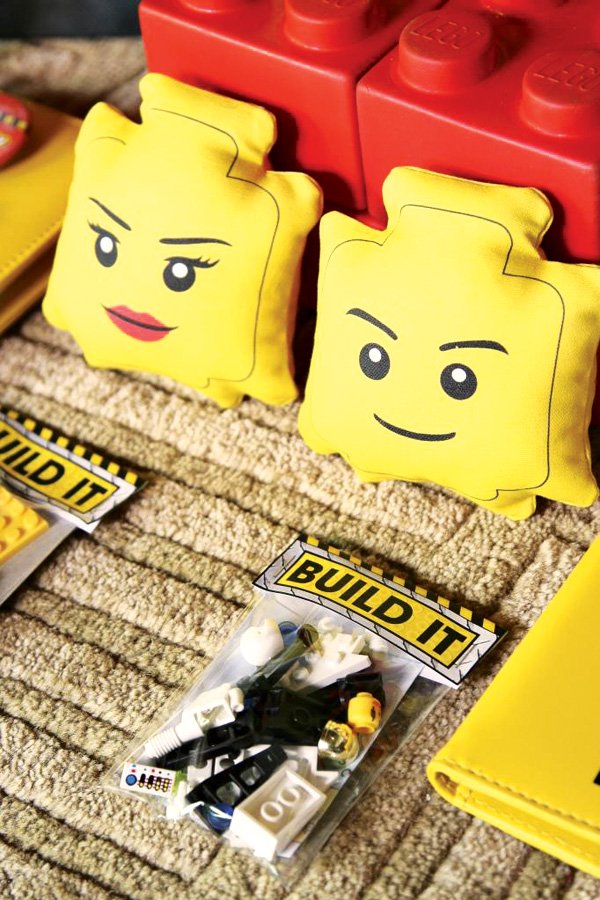 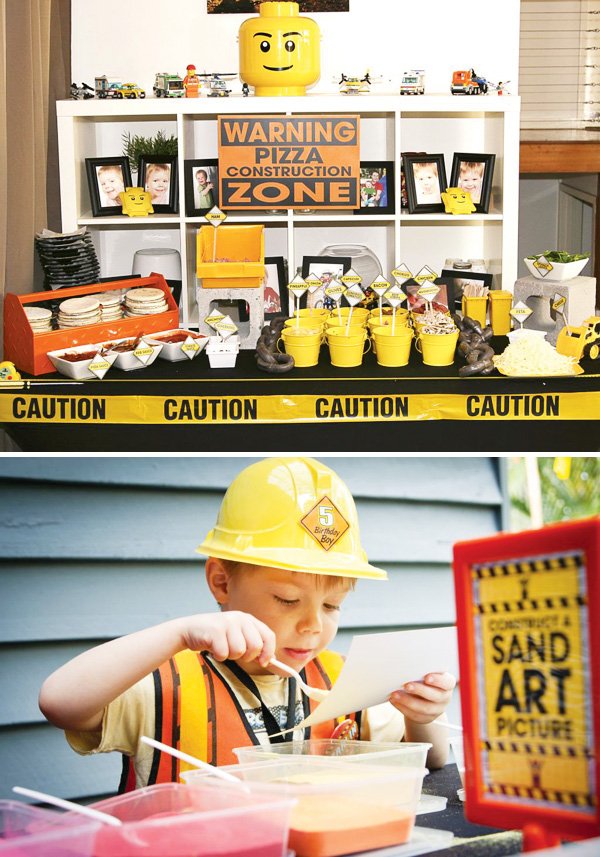 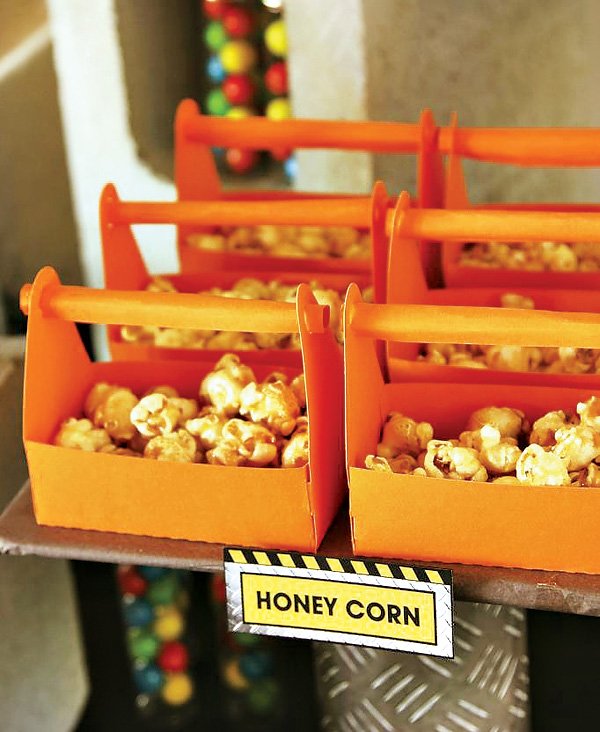 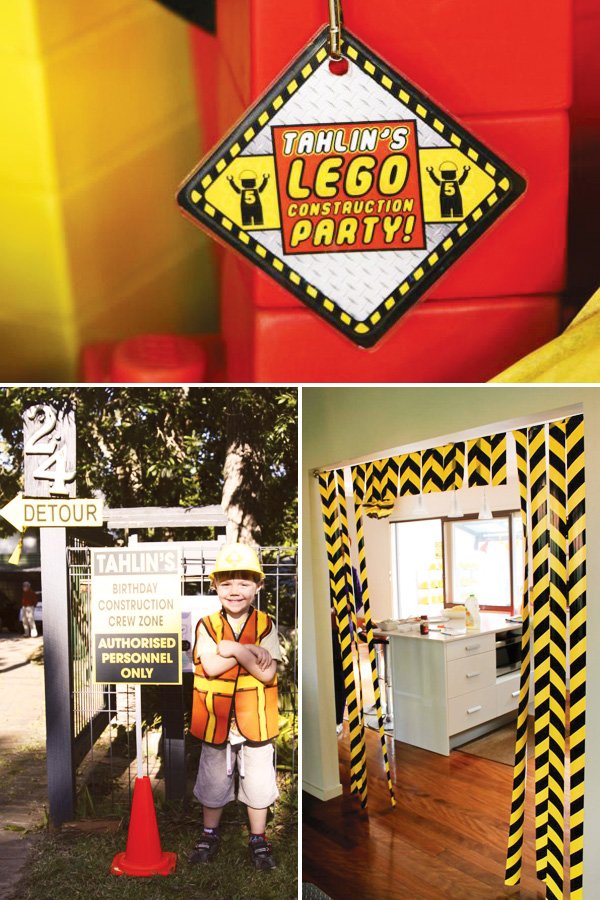 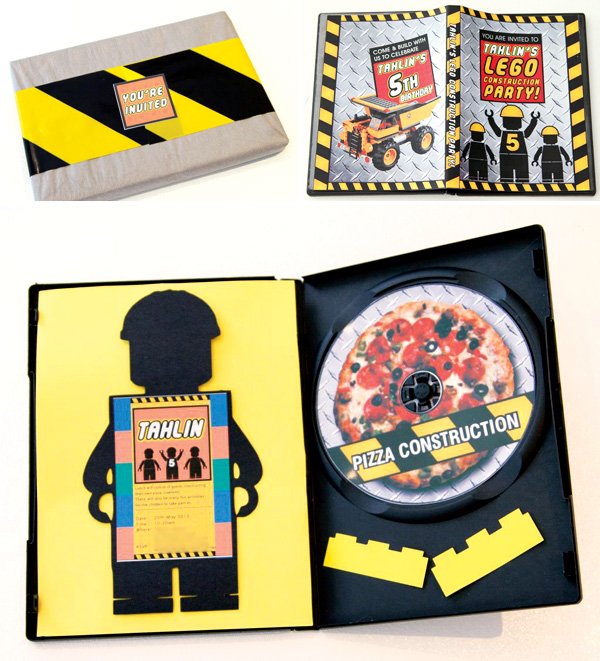 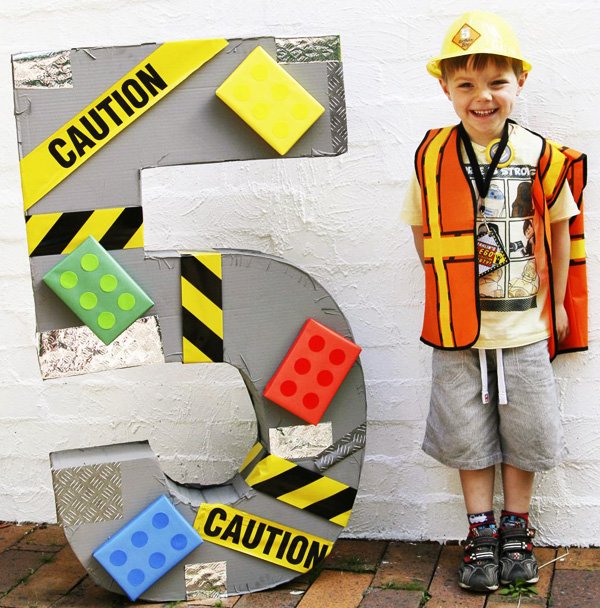 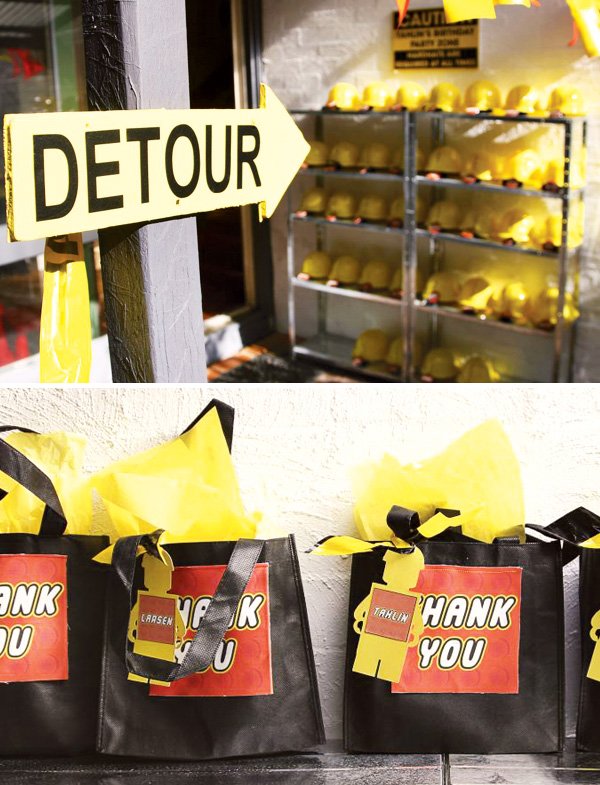 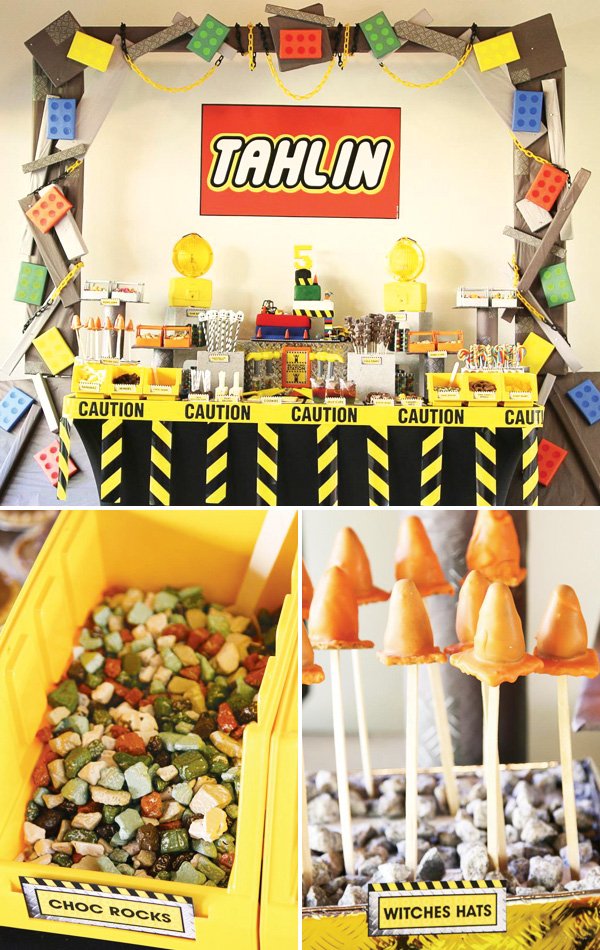 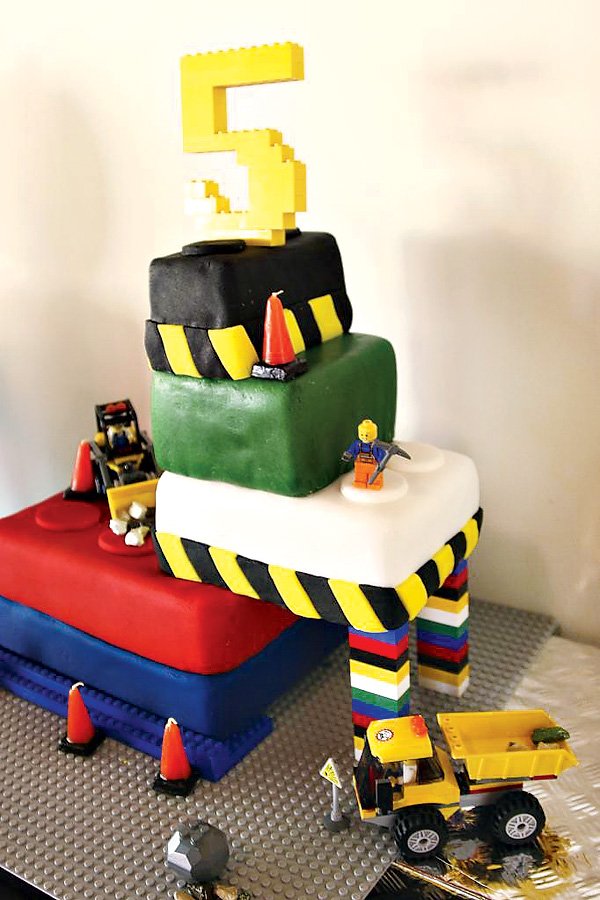 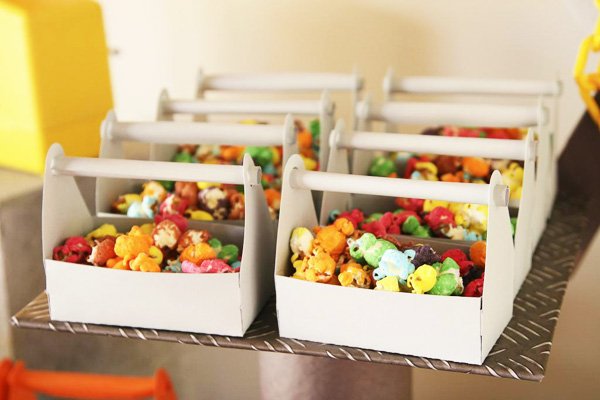 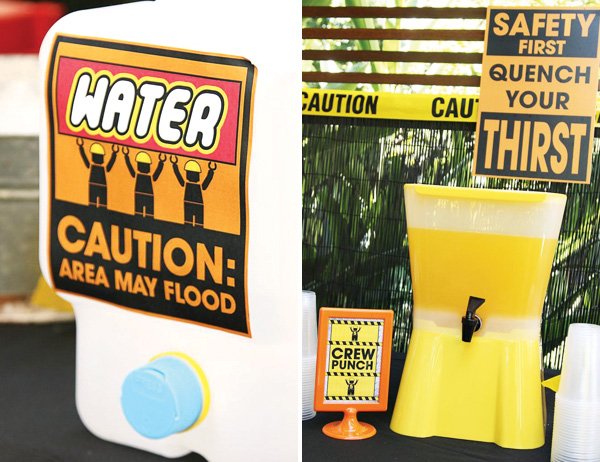 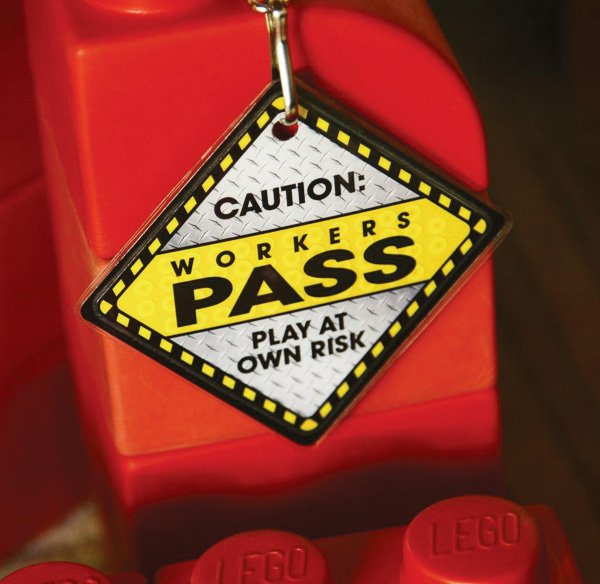 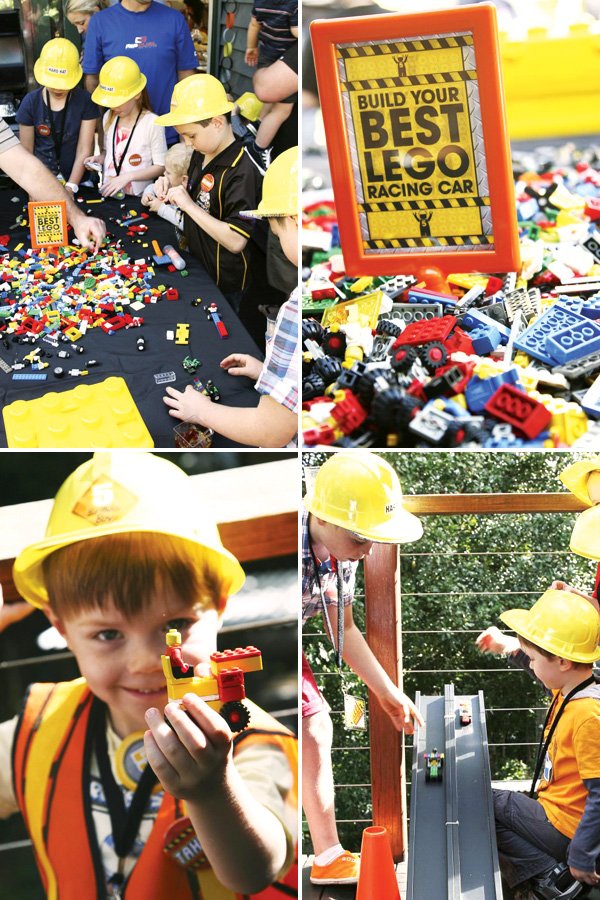 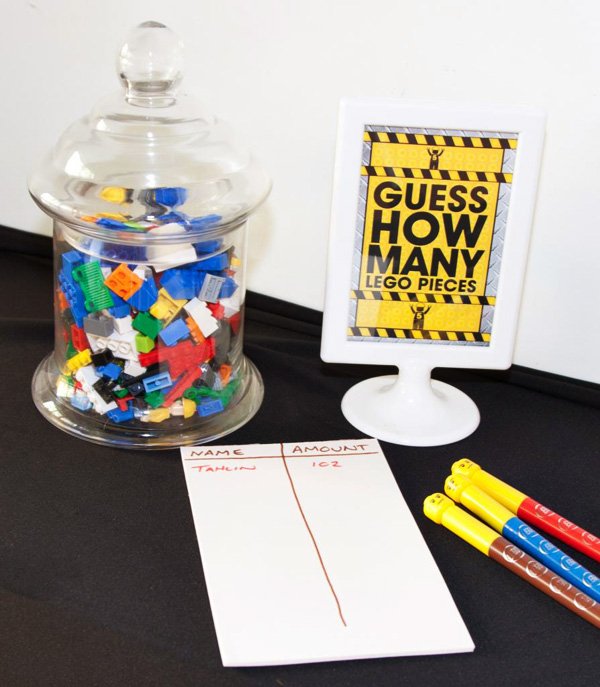 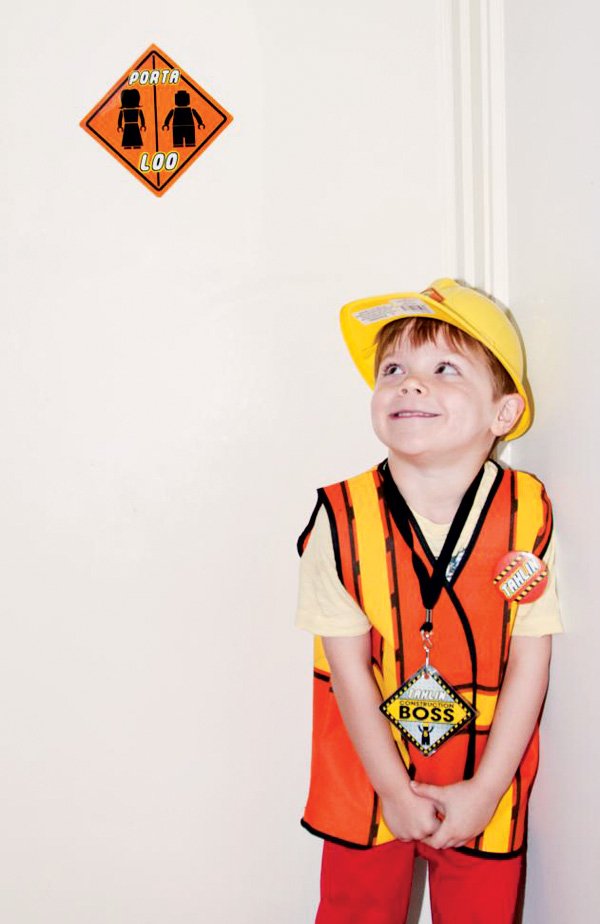 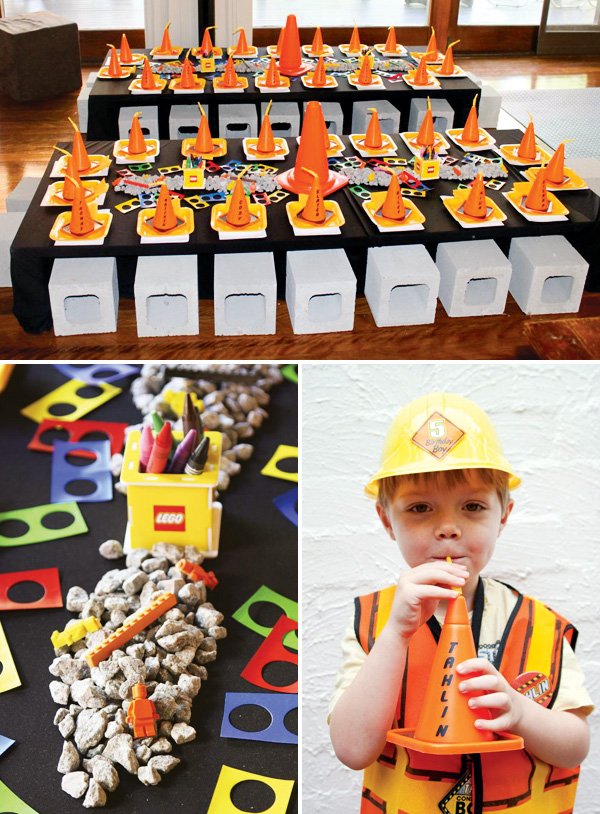 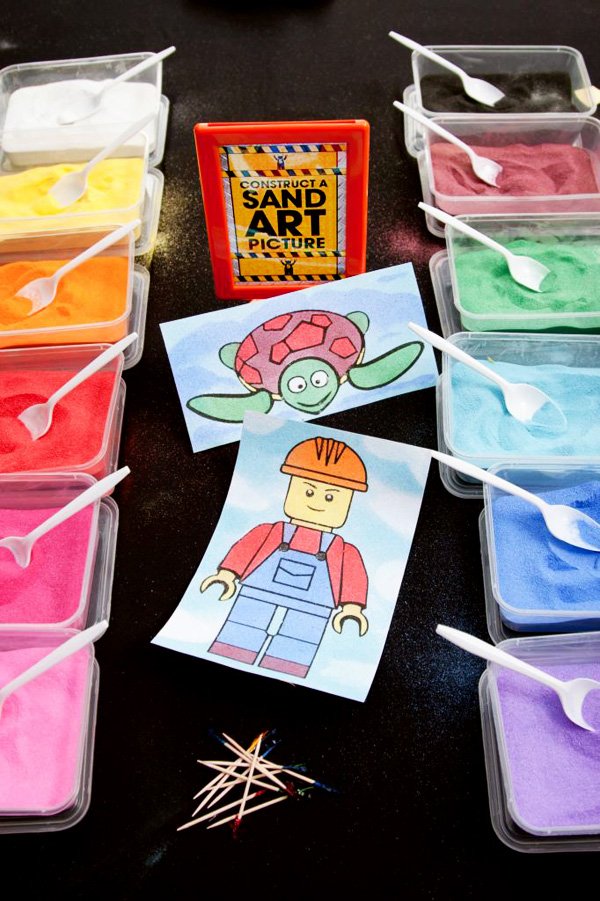 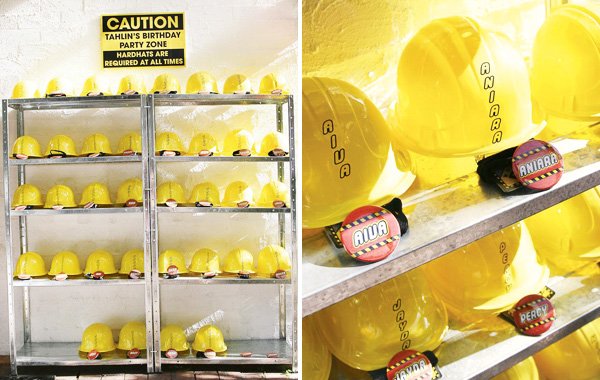 PARTY DETAILS, as told by Daneve…

The Lego theme was quite an easy one to choose for our boy as he hit the stage of building and playing with his Lego. Mummy and Daddy didn’t mind at all as it brought back the childhood memories of our Lego days!

We decided to add the “construction” theme along with the Lego as that’s what you do with Lego. We also based the activities around constructing and building things.

INVITE
Recycling is an important element of planning my parties. I will always try to re-use or up-cycle items to save on cost. When it came to the invites we were given boxes of DVD cases a few years ago and decided to base the invite around that. It made it perfect to use elements inside the DVD case to show the guests the pizza construction details, along with a section containing a magnetised invite in the shape of a Lego man holding the party details. My husband designed all printable elements.

DECOR
Decorating is one of the major elements when putting together the party. We tried to create as much of the decorations ourselves. We had construction signs around the place that informed the guests of the different areas and activities. Other construction decorations included “Caution” tape everywhere, flags, witches hats, lights and black & yellow poms that were made by Ah-Tissue.

When it came to decorating the dessert table, our main focus was to re-use items. The backdrop was created with cardboard boxes that were left over. On the table itself I utilised items from previous parties, which were made from recycled items. Anything that we did need to buy, we had in mind how we could use them after the event. For example, the tool containers will be used in our shed. The sign with “Tahlin” is already being used in our boy’s bedroom. The besser blocks that were used on the dessert table and also the children’s chairs on the day, will be used in to make a veggie garden bed in our garden.

FOOD
The guests were treated to a full dessert table of sweets which they devoured and they were able to take goodies home with them. Another activity was to create their own mini pizzas on the “Pizza Construction Table”. All ingredients were set out for the guests to construct their own type of pizza. Then they labelled a pick with their name so they could keep track of their own pizza. This was a huge hit with the guests as we heard lots of positive feedback from the parents.

CAKE
The design popped into my head as soon as we decided to go ahead with the Lego Party. I’m not a cake maker but embraced the challenge of creating my boys cake. The cakes were a mixture of Chocolate Mud and Red Velvet, but I still haven’t mastered the technique for getting the fondant smooth but I think I did a pretty good job in the end!

ACTIVITIES
One major element for the children at our parties is to make sure there are plenty of things to do. On the day we had Jumping Castle that we borrowed from our friend and got a good work out from the kids.

We had colouring in on the main kids tables with Lego crayons.

The first activity on the day when the kids all arrived was a scavenger hunt. They all had to find their own tube in the garden which had lollies and a small animal Lego to build.

We decided to hire Giant Lego Blocks for the kids to build with. This was a great activity for the young and old on the day.

There was a jar full of Lego where the children had to guess the amount of pieces there were inside. A prize was given to the closest guess.

We had an activity of building a Lego racing car. We had a table with a pile Lego on it where the kids could construct their own racing car and when they had all finished, we raced them on a racing track. The winner of the races received a prize.

After the racing we set up the next activity on the table that was constructing a Sand Art picture. These were made up by creating simple images and transferring them onto a special sticky paper and cutting it out using a cutting machine. This was a popular activity with the kids along with the adults.

While this was going on, we had half of the guests constructing their pizzas.

PARTY FAVORS
One of my favourite parts of organising a children’s party is their gift items to take home.  First off on arrival the kids were guided to a shelf that contained their personalised construction hat, badge and work tag to wear.

On the main kids tables there was a personalised “witches hat” drink bottle that also doubled as their seat placement.

A “Thank You” goodies bag was given to each child as they left which consisted of bubbles, a yellow stationary folder, Lego item to build, a Lego block eraser and my favourite, a “Mini” stuffed Lego head toy. The girls received a female Lego head and the boys received a male one. These were designed and made by us and the fabric can be purchased to make your own. Details on where to purchase the fabric will be given if an enquiry is made.

Overall Tahlin’s Construction Lego Party was very successful and everyone had a great time. It’s always nice to receive positive feedback and comments from the parents saying how much fun their kids had at the party. It makes it all worthwhile when you have done something that has an effect on so many people, but most importantly our beautiful little boy who was totally tuckered out at the end of the day!