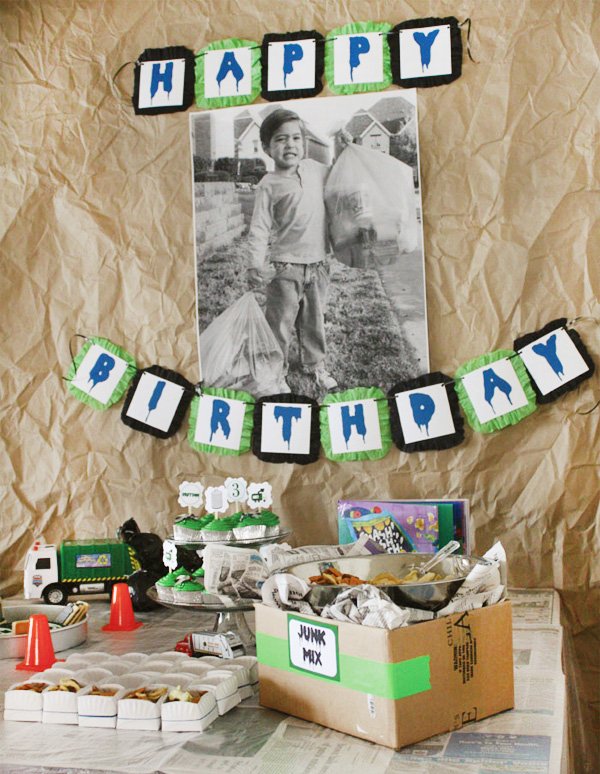 Jennifer from BellaGrey Designs has an adorable son that “LOVES” Trash Trucks… so guess what inspired his 3rd birthday party theme?! ;)

She did such a great job bringing this birthday “TRASH BASH” to life for her little guy – with clever details like trash can shaped cake pops complete with “flies a buzzin by the dozen” and super cute mini trash can favors with candy, toy trash trucks, and Waste Management rubber bracelets hidden inside the mini trash bags. (She made the mini trash cans herself! Here’s a link to the tutorial.) The menu even included playful items like “sanitation subs”, “waste water” and fruit served in “bowls” fashioned from small white paper plates. Read on for lots more fun party pics and creative details… 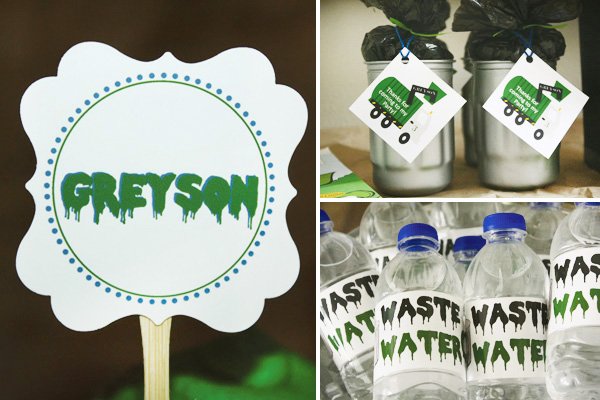 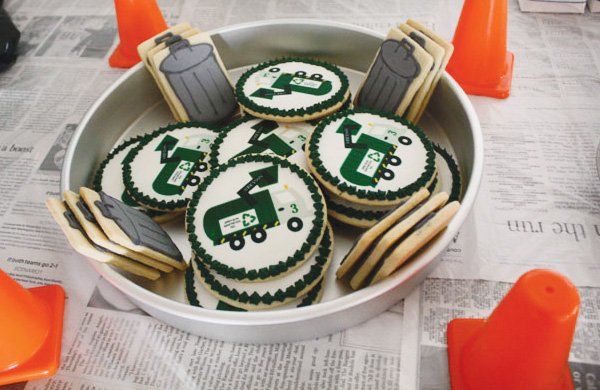 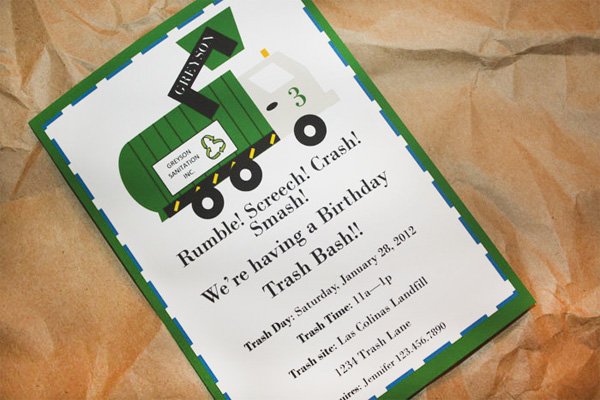 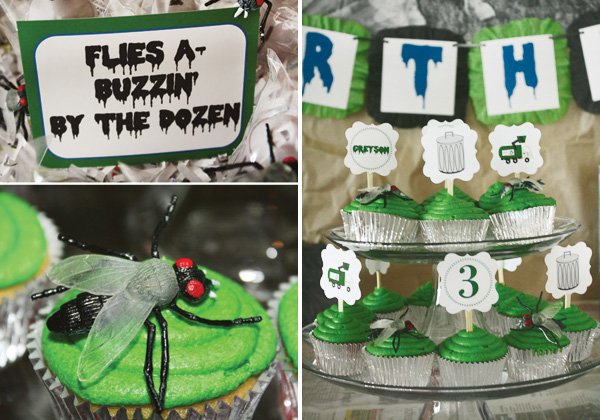 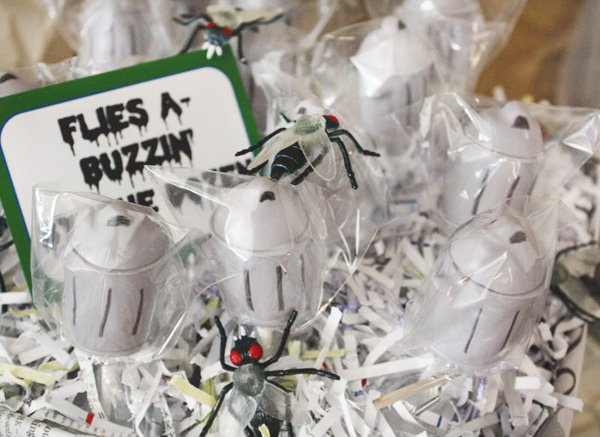 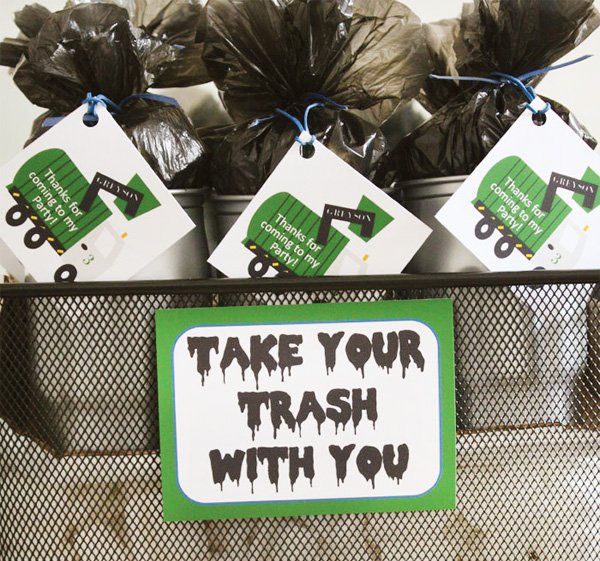 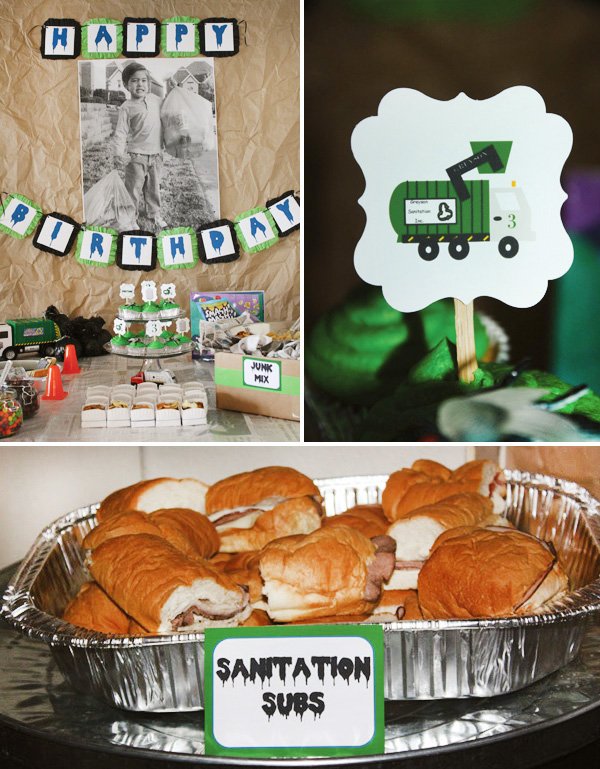 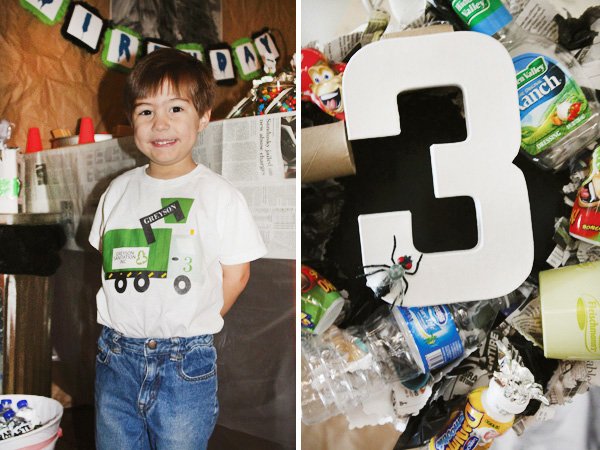 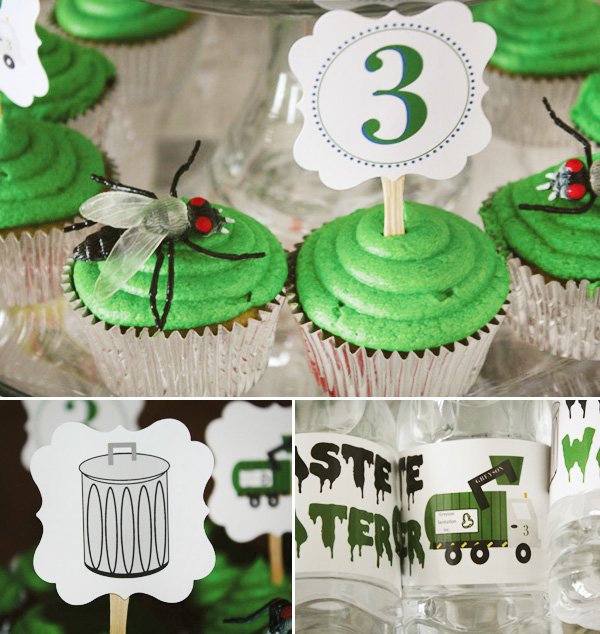 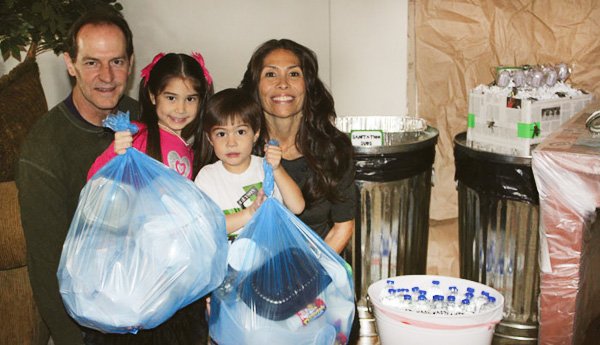 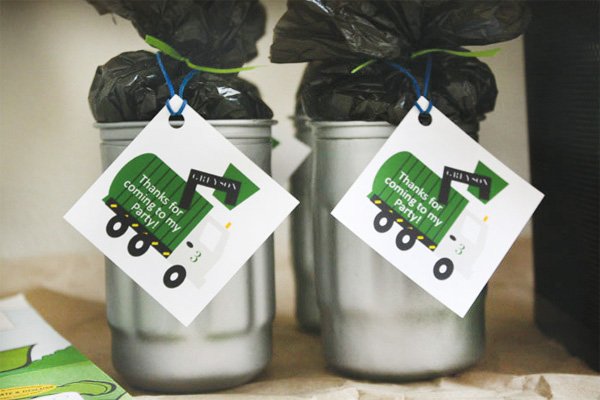 My son turned 3 in December, but we waited until late January to have this party. He LOVES trash trucks! Every time one goes by or we pass one on the road, he says, “Mommy, look there’s a trash truck”. What better theme to have for his 3rd birthday, than something he’s totally obsessed with – Trash Trucks!!

He was so excited for this party, he could barely wait. A few weeks before the party, I wanted to take a photo of him with the trash man and the truck, but the noise scared him, so we opted to take a much more relaxed photo with him holding two recycling bags of trash. I had the photo blown up to poster size and printed in black and white.

I used crumbled brown craft paper, for the backdrop and placed Greyson’s photo poster in the middle. When I thought about the font I wanted to use for the paper products, I knew I wanted to depict slime or goo, like real trash. When I created the banner, I used regular crepe paper streamers and cut them into strips, then rolled them into little balls (it was a trash party after all, so I didn’t want everything to look crisp) and attached the crumpled paper to the back of the banner letters. I used old boxes to hold the “junk mix” and trashcan cake pops. New silver galvanized trash cans were used as props to hold the “flies a-buzzin’ by the dozen” cake pops and the “sanitation subs”.

I used plenty of newspaper around the party, but didn’t want the guests to have newsprint on them after the party, so I covered the newspapers with plastic drop cloths, on the tables. I made the little white paper bowls out of small paper plates, these held the junk mix as well as fruit. I had the cookies made into trash cans and she used our image on the trash truck cookies. These were a hit! I also had “trash can” cake pops made. I added flies, I had purchased back around Halloween, to the cake pops, cupcakes and mini trash bags around the toy trash truck. We tried to come up with clever names for the food and beverages. The kids, as well as the parents really liked this idea.

After the party, the kids were given party favors in mini trash cans with mini trash bags, these were filled with a toy trash truck; a Waste Management rubber bracelet and some candy. They were also given a recyclable coloring book from Waste Management. I created an iron on for his t-shirt; he was so excited when I gave him the shirt the morning of his party. He wanted to get dressed right then and there!! I also made two wreaths. One out of trash bags with a “G” attached to it and the other using newspaper, cut with pinking shears, and clean trash with the number “3” attached to it.