Skip to content
Parties for Boys, Styled by Jenn 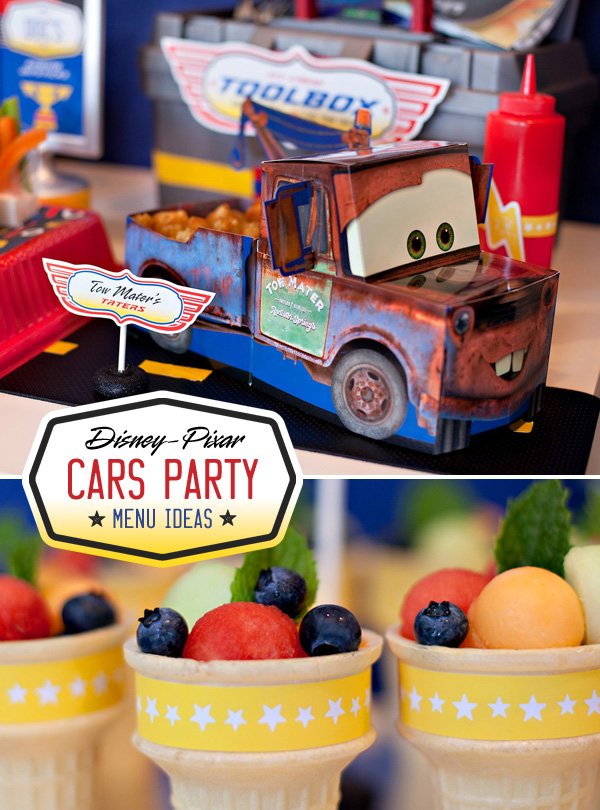 Party food doesn’t have to be complicated – especially when it comes to the kids! One of my favorite “tricks” for serving up creative food at kids parties is actually in the naming of the dishes – it’s fun to think up clever food names that tie into your party theme somehow.

For example, in our recent Disney Pixar Cars Birthday Party, all of the food and drinks were named after characters or elements of the movie. There were things like “Tow Mater’s Taters” (tater tots), “Luigi’s Pizza Tires” (bagel bites), “Fillmore’s Organic Fruit Cups” (fruit salad in ice cream cones), and more! Scroll down to check out the full list of menu ideas. :)

Everything is also homemade or store-bought, which keeps the menu affordable. It also means that if you’re reading this a day or 2 before your own Cars party there’s still time to pull these off! And don’t forget that our matching Free Printables include all of the food cards and food signs pictured here. ENJOY! 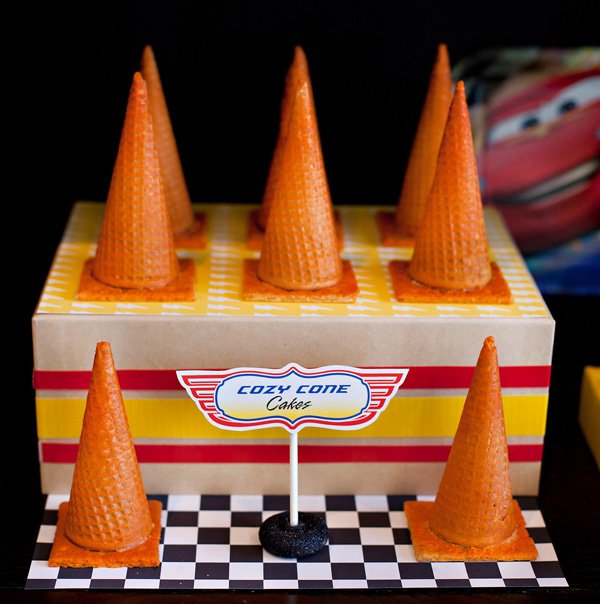 
Inspired by the “Cozy Cone Motel” in Radiator Springs, these sugar cones are filled with a cake pop mixture, attached to graham cracker squares, and covered in edible orange food spray by Duff. Super easy! (Recipe pictorial coming soon). If you’ve got some extra time on your hands, these would be super cute embellished with little “motel room” doors and windows!

Since these 2 work as a team in the movie, I thought it would be cute to display their dishes as a duo too! I made this DIY “tire inspired” tiered serving tray from round nesting boxes, rubbery black shelf liner material, and pizza pans. 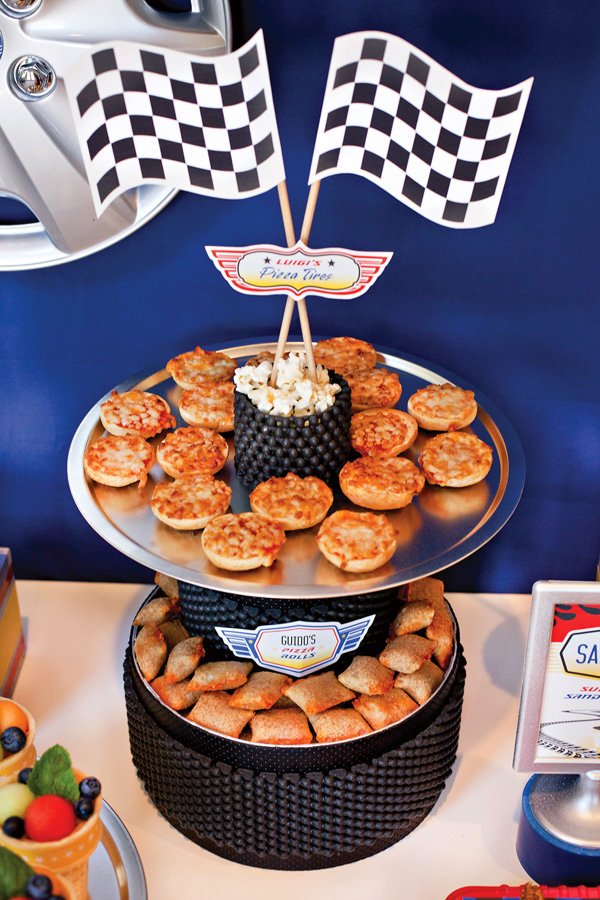 Our food table had a “Pit Crew” vibe to it, so I decided to use an actual toolbox to hold all of the eating utensils and call them the “tools”! (Found the toolbox for less than $8 at Walmart!) The plates and napkins are from the Disney Cars Dream Party line by Hallmark, and we also embellished some “real look” plastic silver forks with colored duct tape to give them a racing stripes look: 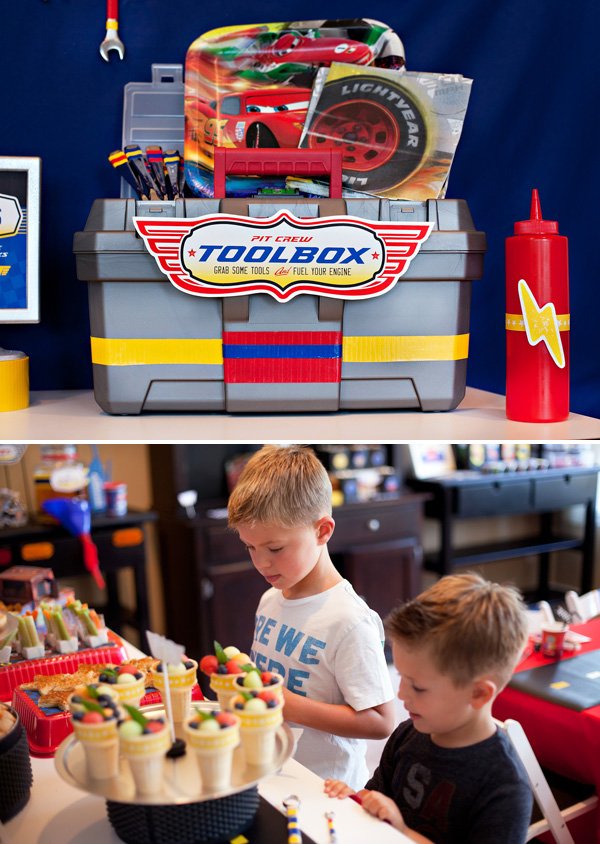 I love using cookie cutters on kids sandwiches, and stars seemed like an easy fit for this party – especially for the character of Sarge, who runs the local army surplus shop in Radiator Springs! We made grilled cheese, but you could really use any type of sandwich for these. 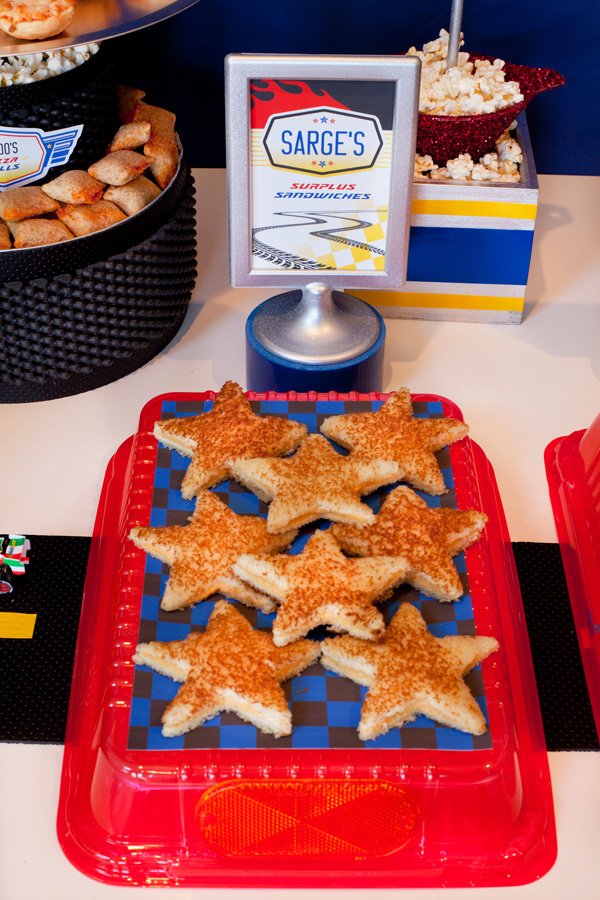 I’ve seen fruit cups in ice cream cones floating around the web for a while but never found an excuse to make them – until now! Fillmore is the “resident hippie” of Radiator Springs who lives in a colorful dome and makes organic fuel… the perfect inspiration for colorful fruit cups served in edible containers! We also garnished the cones with a small band of stars (included in our free printables). 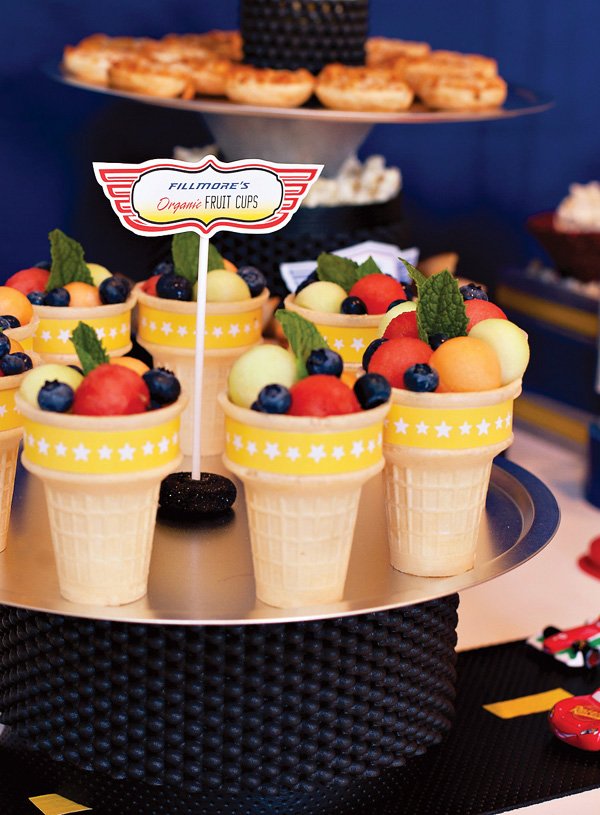 I was determined to sneak some veggies into the menu…  and veggie sticks sound much cooler as “Doc’s Engine Dipsticks“! They’re served individually here with low-fat ranch for dipping. And since Doc Hudson is not only the famous Hudson Hornet, but also the resident DOCTOR of Radiator Springs, it makes sense that he’d want kids to eat their veggies, right? ;) 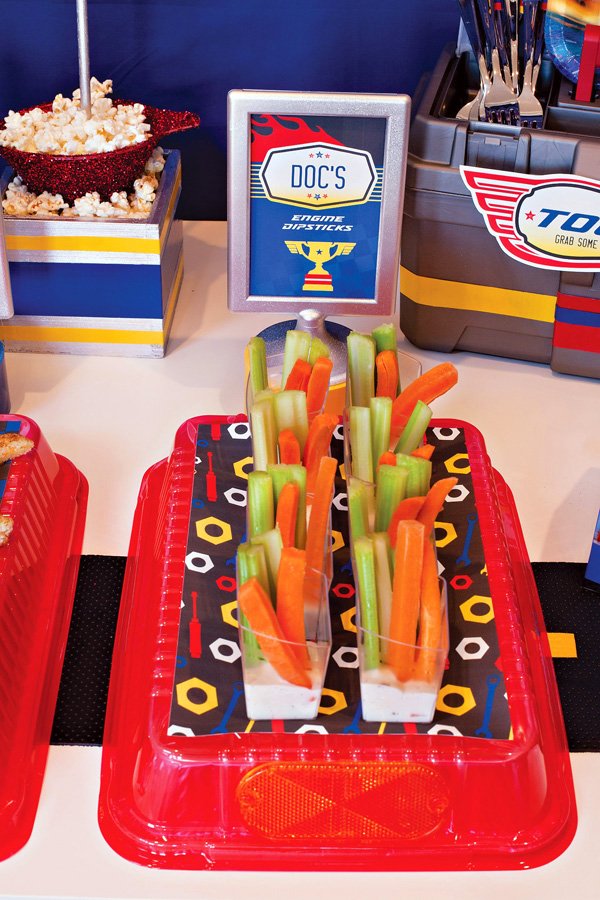 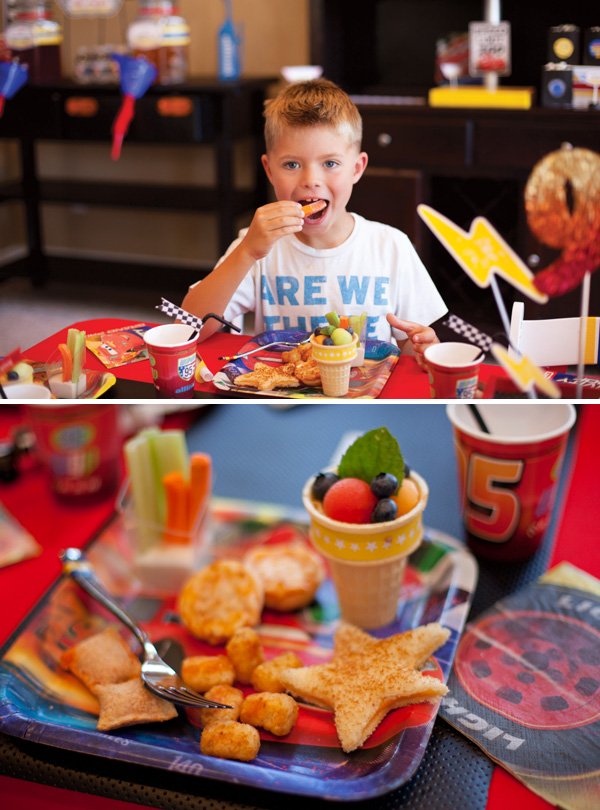 Who can resist this super cute 3D Tow Mater Snack Caddy?! It’s also from the Disney Cars Dream Party line. We simply filled it with tater tots and added a “Tow Mater’s Taters” sign. Done! You could also swap out potato chips for the tots. 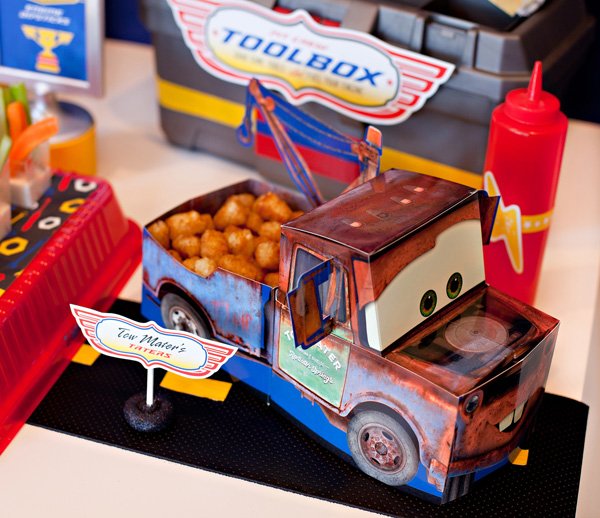 Here’s a peek at the dessert station, which was very simple since our emphasis was on the regular food table this time. My living room hutch has undergone many transformations for a party, but this is the first time it had a “traffic light” running through it! ;)  I was pretty excited about how this little DIY project turned out… (the “pole” in the middle is just part of a gift wrap roll tube, spray painted silver). 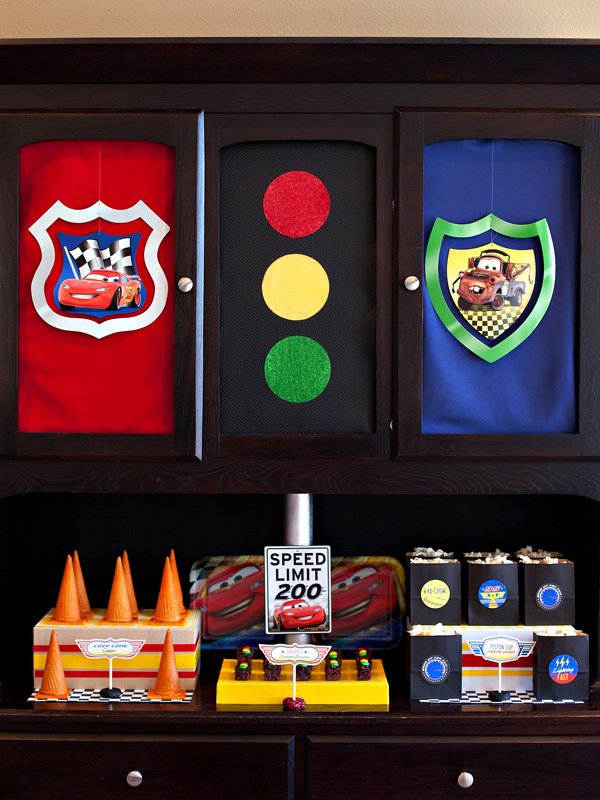 The “stoplight” is flanked by decorations from the Disney Cars Dream Party line, and I couldn’t resist putting their “speed limit” sign right in the middle of the stoplight poll… it seemed especially fitting to be near the “Sheriff’s Stoplight Brownies”!.

These homemade brownies are always a big hit with the kids – and for a Cars party we’ve named them after the resident traffic cop of Radiator Springs! All you need is brownies + chocolate frosting + red/yellow/green m&m’s. You could also just decorated pre-made frosted brownies to really make your life easy. ;) 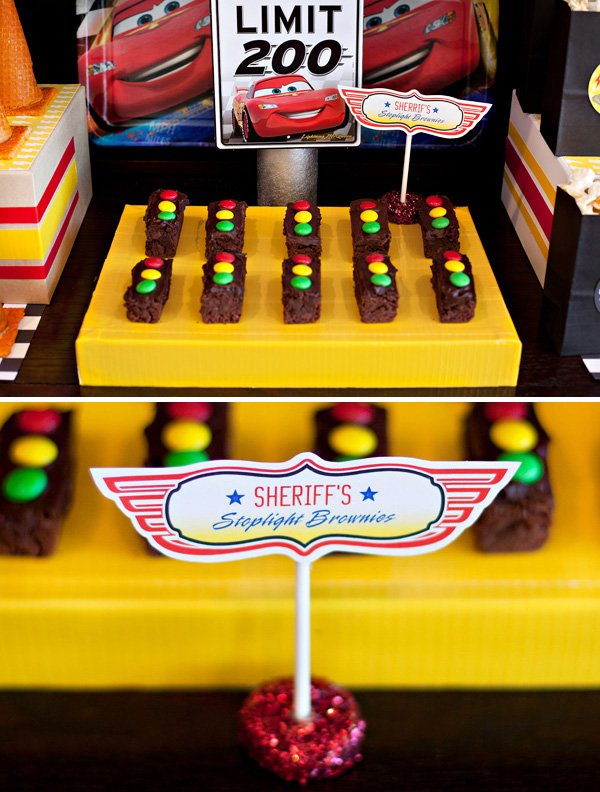 Last but not least is our “Piston Cup Popcorn”. This can be served either salty or sweet – you could even do something super fancy like this! The main emphasis here is on the name – it’s inspired by the famous racing series from Cars. We designed some free printable party circles to decorate the front of each bag. Download them yourself right here! 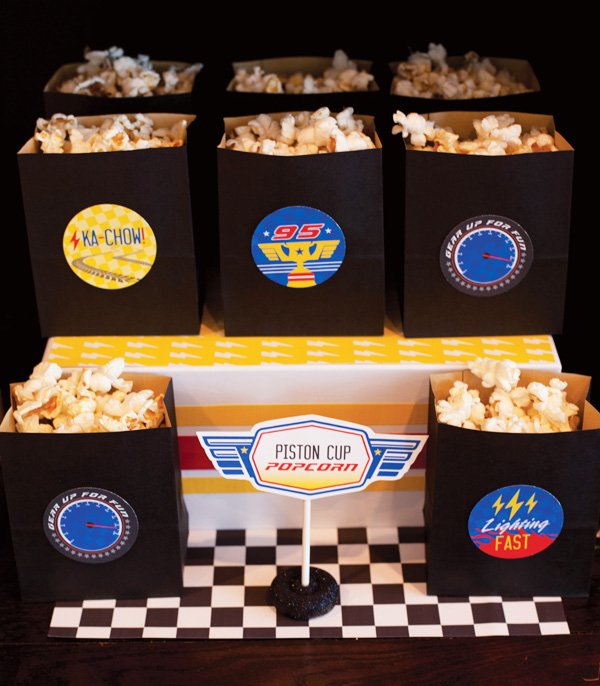 I hope some of these Cars food party ideas come in handy for your own celebration! Here’s an overall shot of the food table where most of them were used. You can get more details on the decorations shown here and throughout the rest of the party on the full Cars Birthday Party recap. 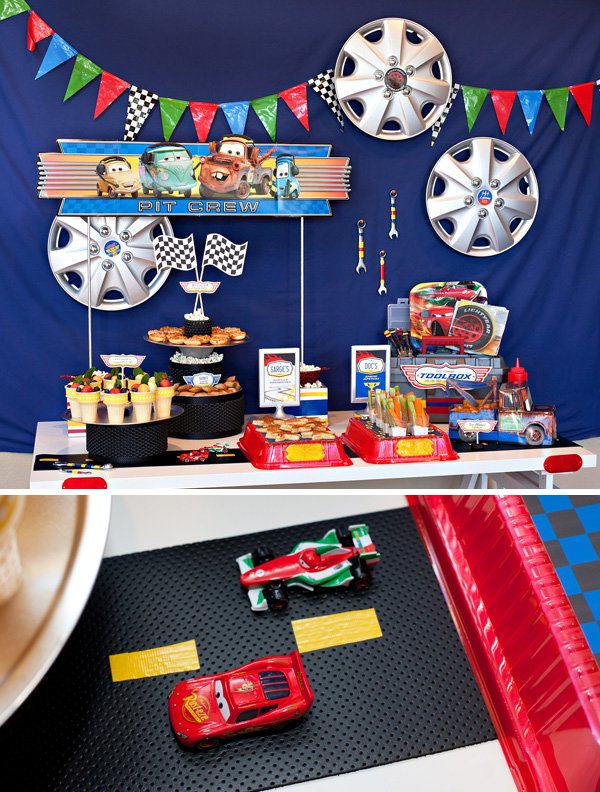 Another peek at one of the free printable signs… :) 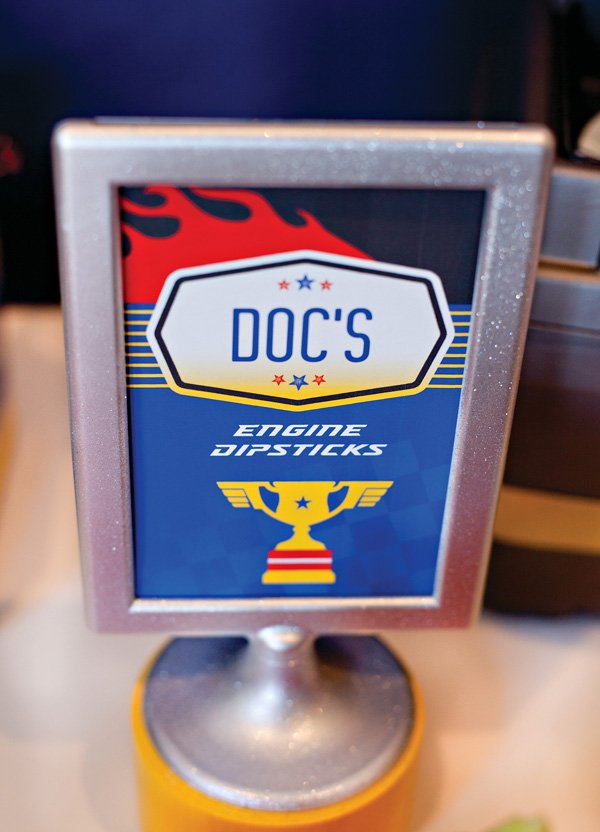