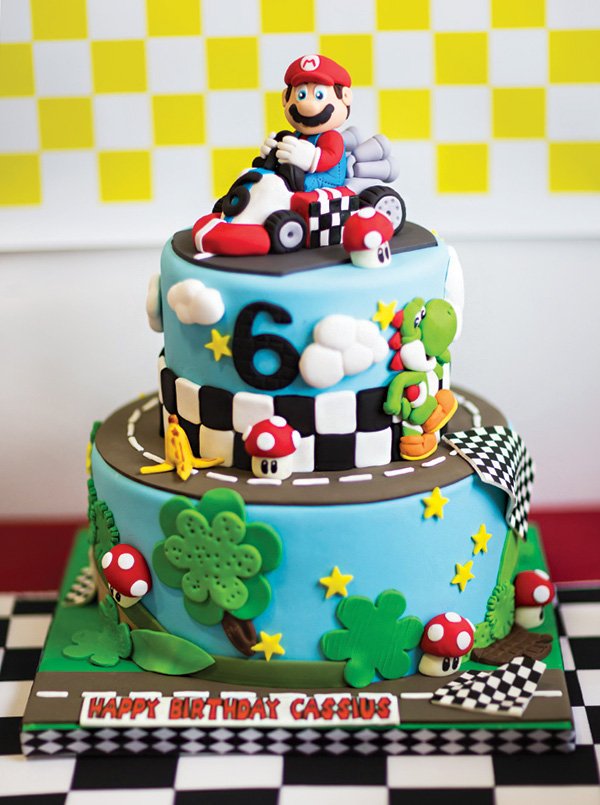 For her son’s sixth birthday, Melissa Peterson of MudPie Parties made use of her and her husband’s awesome party space to create this Mad Dash Racing Mario Kart Birthday Party with tons of Mario themed treats & activities. To work off lunch & dessert, the kids raced around (Mario Kart style) in home-made race cars! It’s always a good sign when all of your guests are blissfully exhausted by the end of the party! ;) 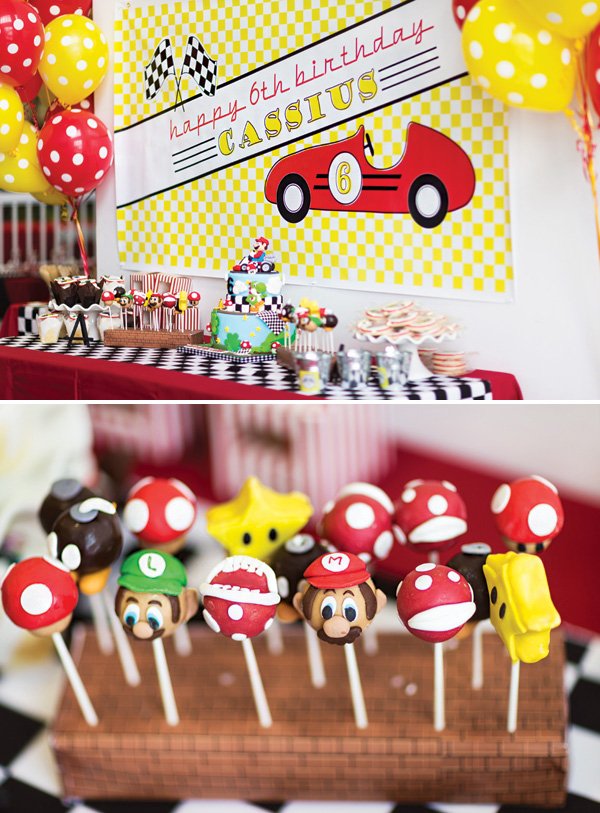 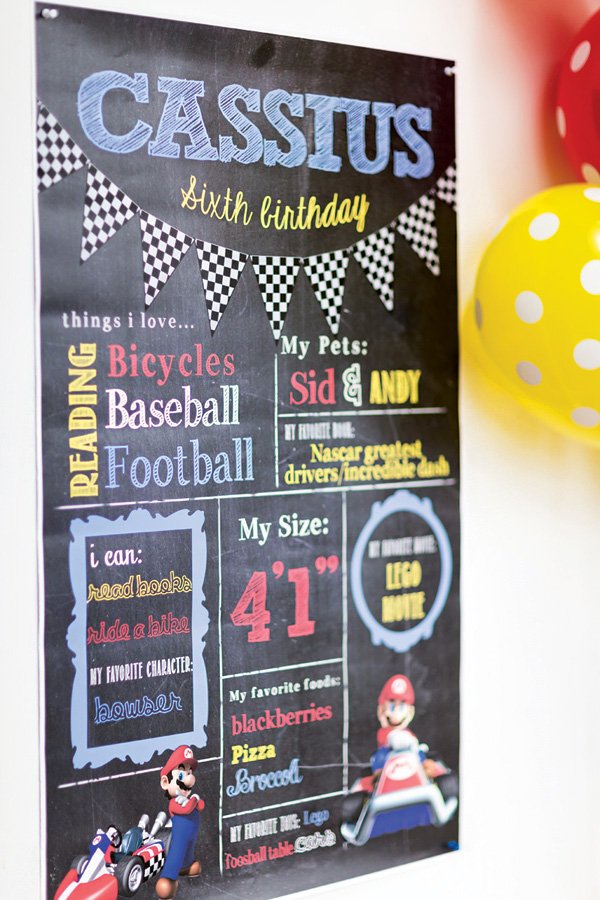 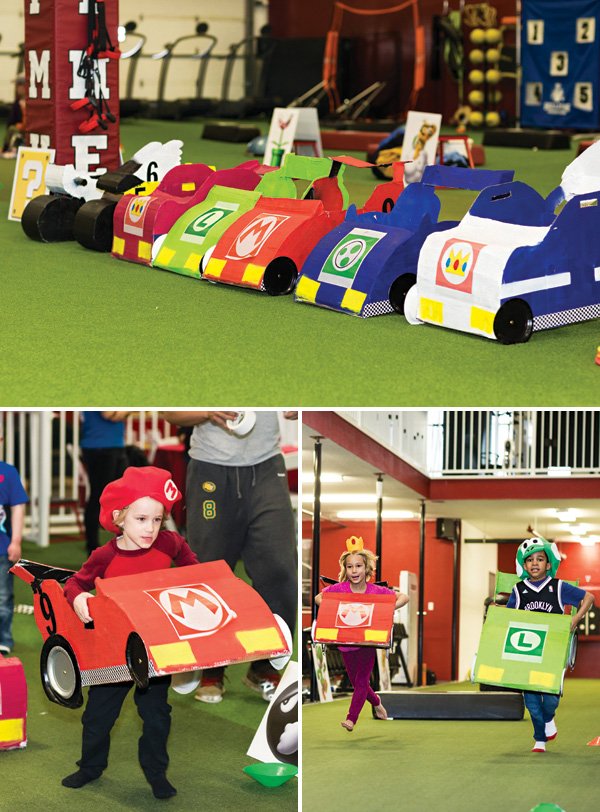 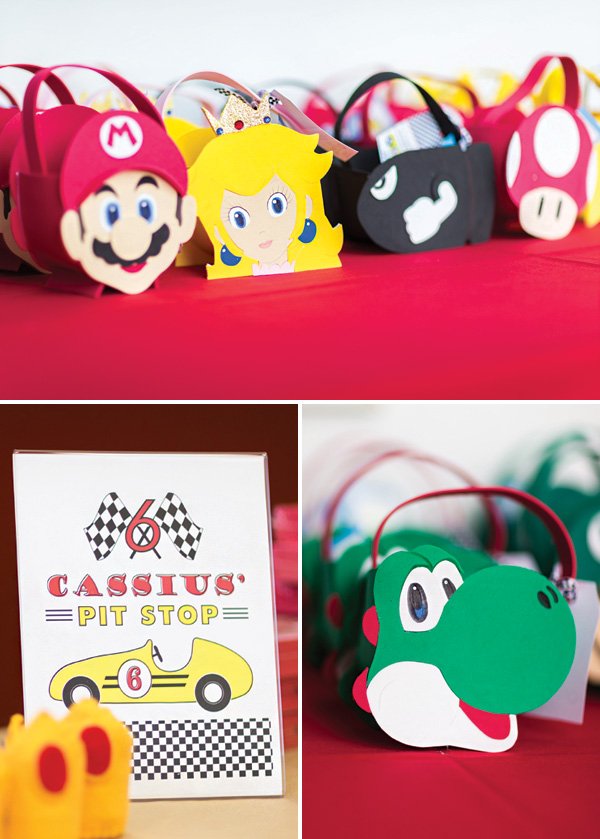 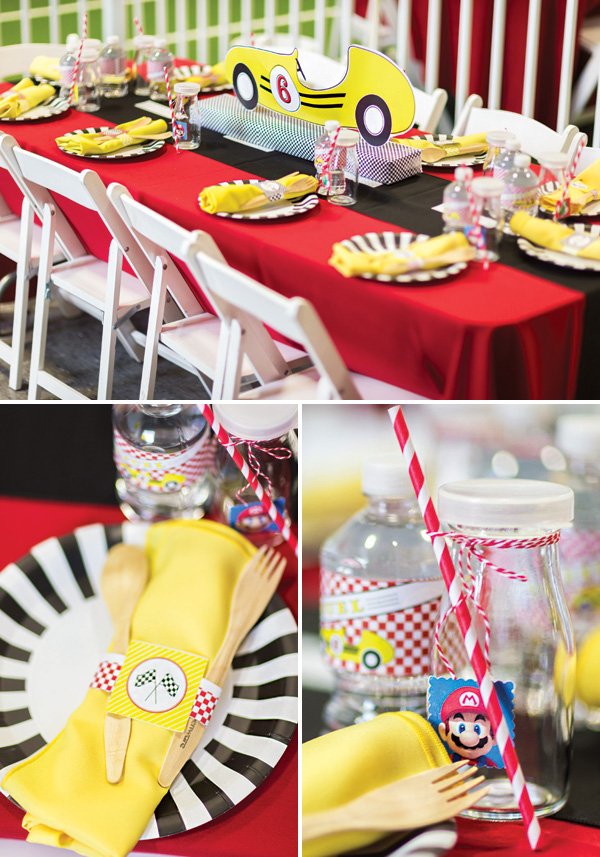 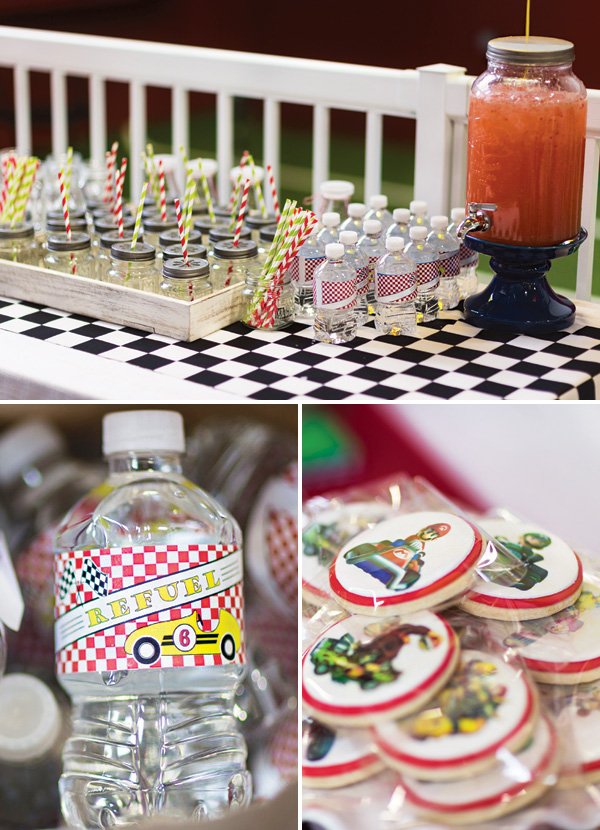 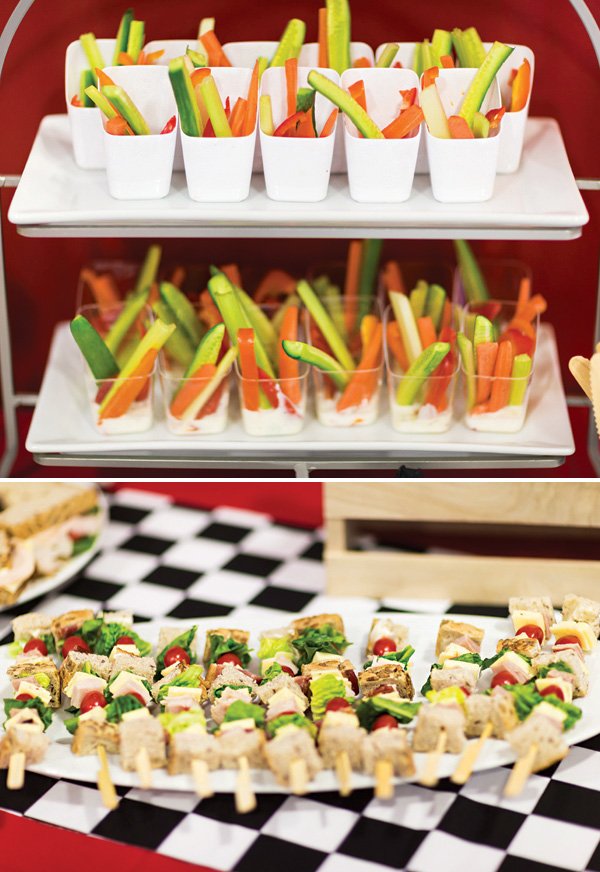 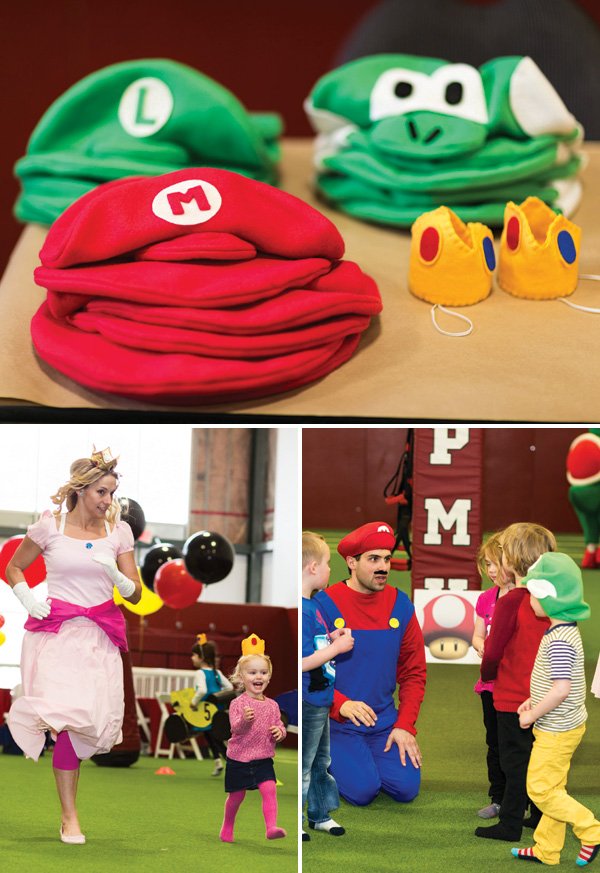 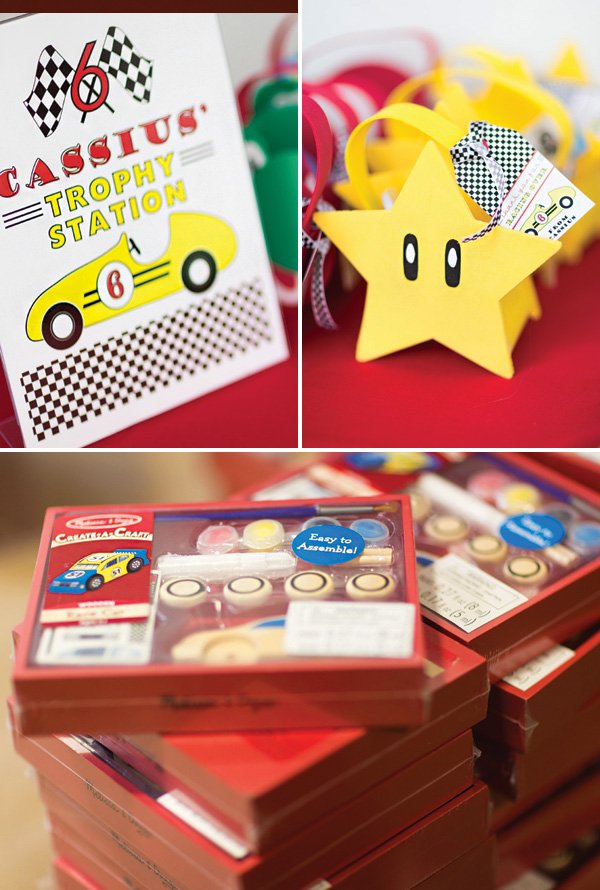 PARTY DETAILS as told by Melissa…

My husband and I own and operate an athletic facility, Playmaker U in Sherwood Park, AB, Canada, and we’ve recently added active birthday parties to our offerings, creating MudPie Parties!

So when Cassius asked for a Mario Kart theme for his 6th birthday party, I was initially hesitant. We typically like to encourage an “active” based party and all I could envision were kids playing video games in the basement of our house. I decided to take this as an opportunity to challenge the traditional ideas of a Mario Kart party!

A MudPie Party usually consists of three elements: 1. Active 2. Imaginative Play 3. Lots of Color. This party would be no exception! With this in mind, I knew immediately that I wanted to transport the children into the world of Mario Kart with their own cars, hats for dress up, photo booth area, and lots of theme based colors like red & yellow, along with checkerboard print throughout.

DECOR
Anders Ruff customized the colors for their vintage race car collection to go with the red/yellow/black color scheme I wanted to use for the party. Local photographer Jesse Kushneryk did an amazing job capturing all the party details.

The entrance table greeted the children with a 24×36 chalkboard poster created in photoshop with all things about Cassius. The table also doubled as our “trophy station” which included Mario Kart character themed gift bags.

PIT STOP
We created a “pit stop” station which we decorated with kraft paper and assembled Mario Kart character hats (Yoshi, Luigi, Mario, and Princess Peach) for the kids to choose from! Also stationed here was our “Melissa and Doug decorate a race car” kits. As the children arrived, we encouraged them to choose a hat and they could either decorate a race car or play in the 30 foot obstacle course bouncy castle while waiting for the other guests to arrive.

KIDS’ TABLE
The kids’ table was transformed into a roadway using a black table runner and white duct tape strips. I also printed a 2 foot long race car from Anders Ruff to include as a centerpiece, which I mounted onto checkered print covered styrofoam. The table setting included black & white striped round plates (wheels), napkin rings with the 2” party logos, water bottles wrapped with the labels from Anders Ruff, vintage glass milk bottles with Mario Kart characters, and wooden cutlery.

DESSERT TABLE
I used the vintage race car birthday banner as a backdrop, which really gave the dessert table lots of color! I also incorporated checkered fabric I found at our local fabric store as a table runner. Lots of Mario Kart details were scattered throughout the dessert table.

The cake was by far my favorite element on the dessert table! Over the Top Cakes created the cake, cupcakes, and cookies featuring some of my son’s favorite characters! The cake pops designed by Cake Couture were created using individual characters from the MarioKart video game as inspiration. I found some styrofoam at Michaels and wrapped it with brick paper to create a cake pop stand. I also scooped ice cream into small mason jars and topped them with 2” labels indicating chocolate or vanilla. Small galvanized metal buckets with 2” party logos from Anders Ruff were designed to hold utensils and napkins.

FOOD
I wanted to serve food that kids could easily manipulate, were likely to eat, and would incorporate more of the MarioKart theme! The menu consisted of:

The kids also had a choice of milk, fresh squeezed strawberry lemonade, and water. We had a drink station filled with glass vintage style milk bottles with Mario Kart characters and small mason jars with star cutout lids and striped paper straws.

ENTERTAINMENT
To create the active element to our party we decided to create a race car driver training academy. We built Mario Kart race cars and bikes for the kids to use in their training. This was by far my favorite item of the party AND the most time consuming to create! After much research, we made 14 cars and bikes using cardboard, duct tape, paper mache, spray paint, and labels with various Mario Kart logos and numbers. We ran 3 separate stations which focused on activities surrounding defensive driving, agility, and a grand prix race.

When “training” was completed, each child received their official MarioKart “racers license.” I asked parents before the party to email a picture of their child and in photoshop added the picture, along with some cute driver details, to a MarioKart drivers license image I found online. I printed them out on card stock and put them in a clear name badge holder and attached a lanyard that I bought from Staples.

Our friends were wonderful enough to dress up as Mario, Princess Peach, and Yoshi and were included in the training activities, throughout the party as well as for pictures with the kids. We had a friend paint child size cardboard cutouts of the MarioKart characters for the children to take pictures in the photo booth area.