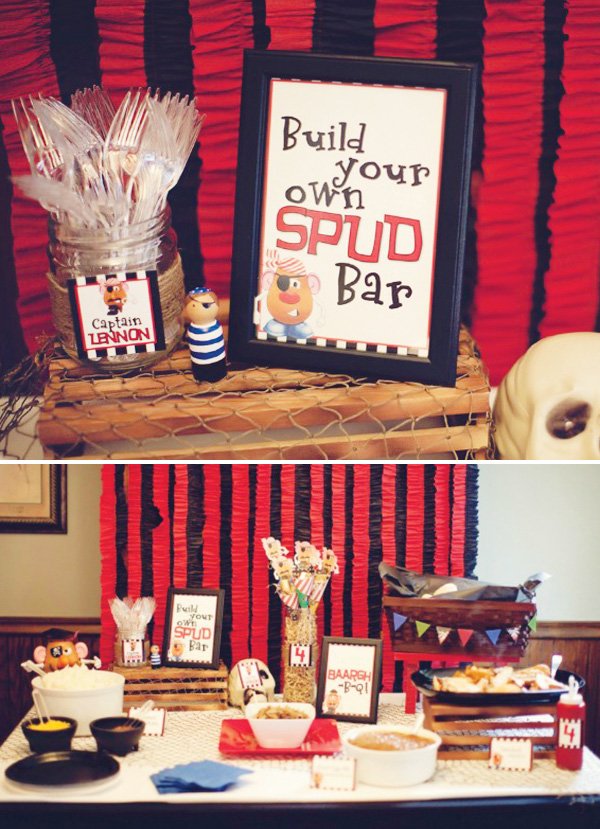 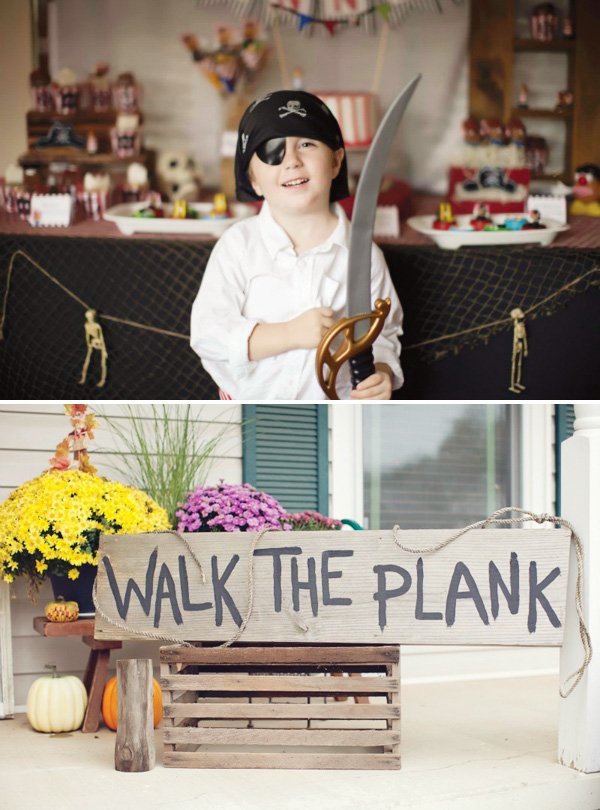 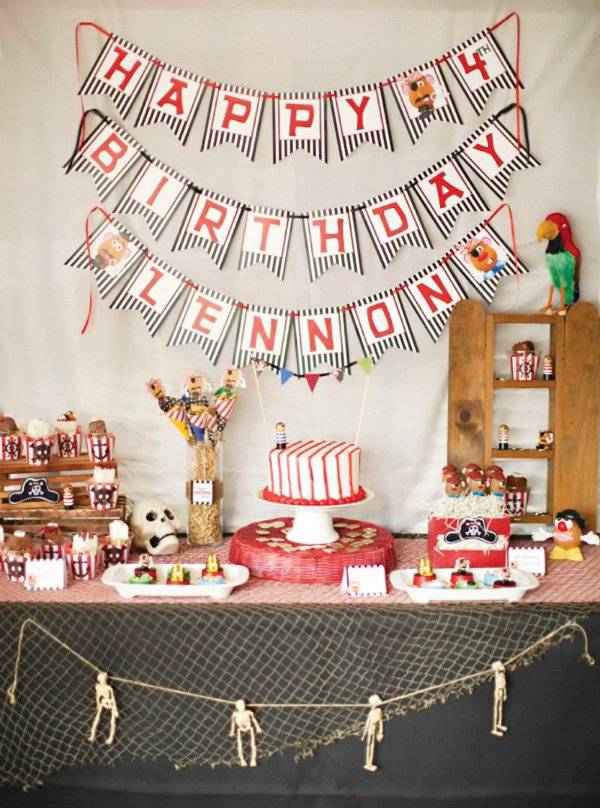 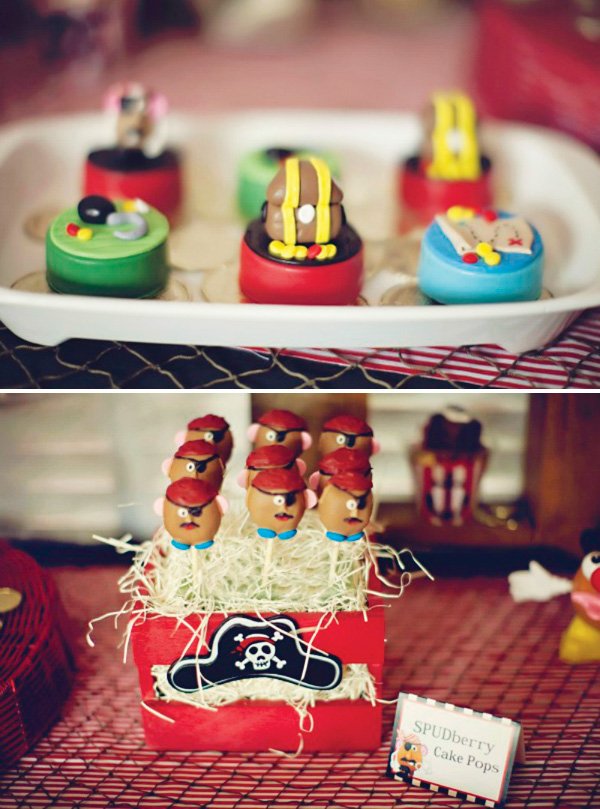 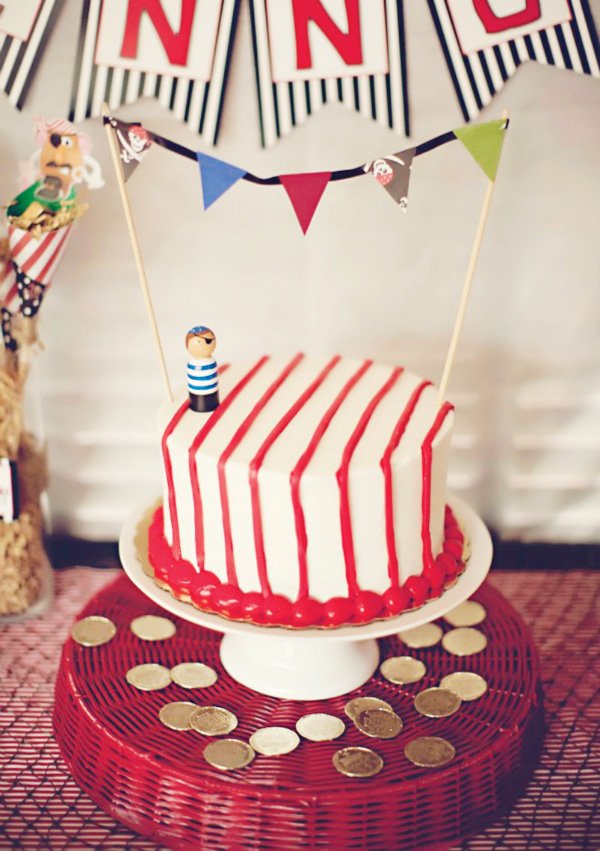 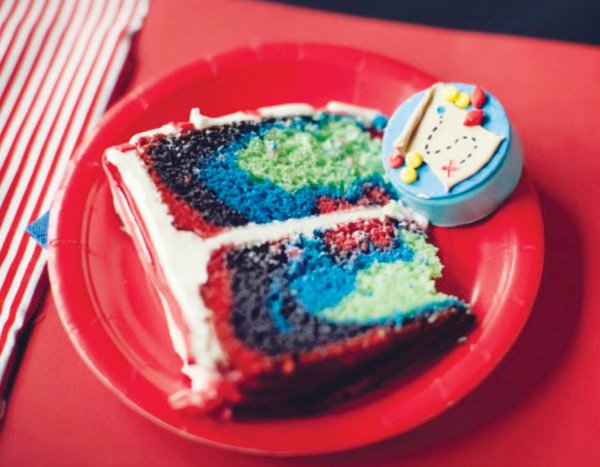 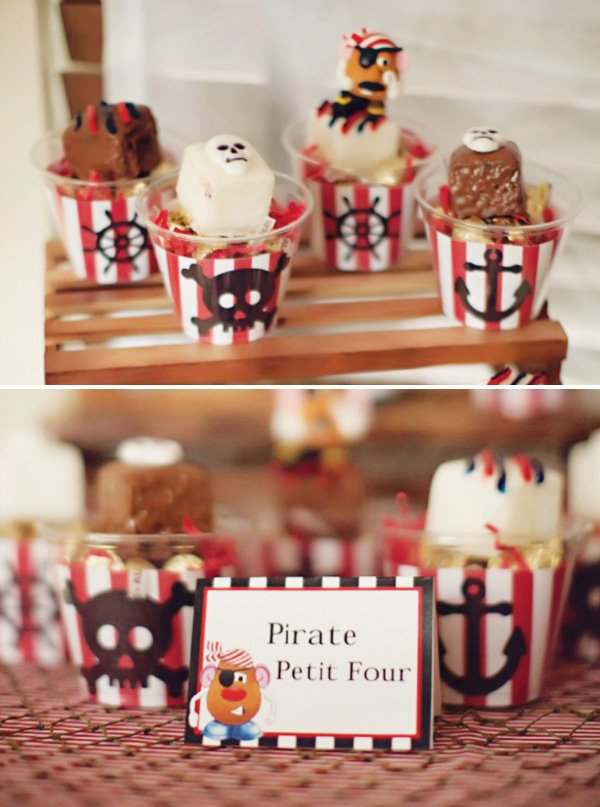 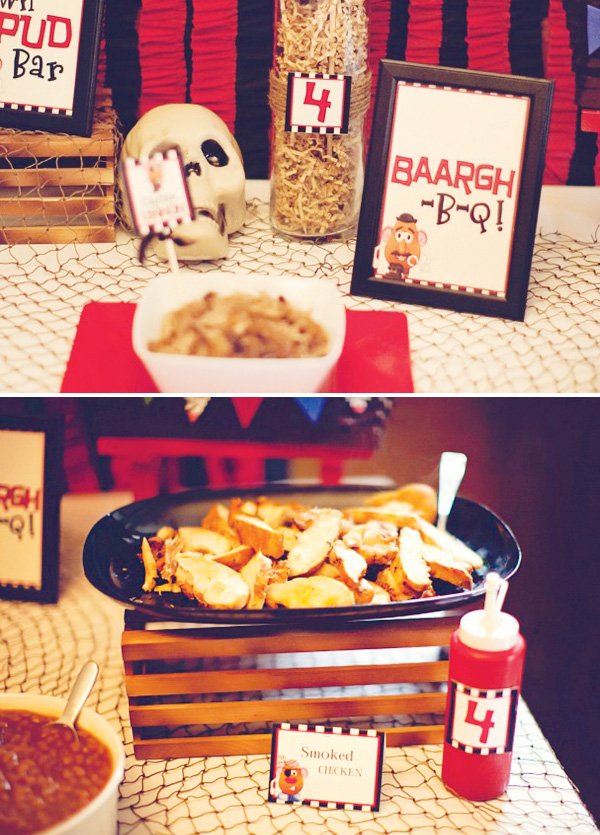 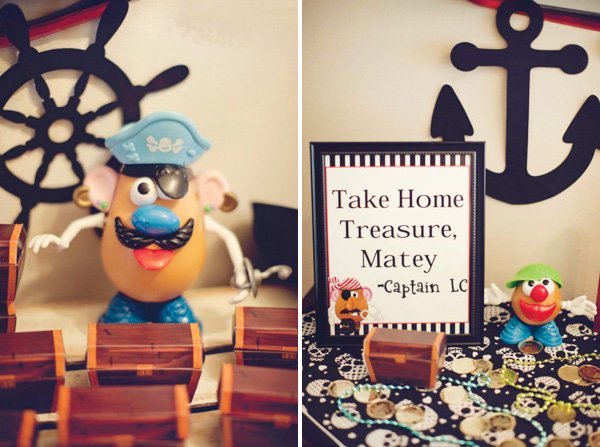 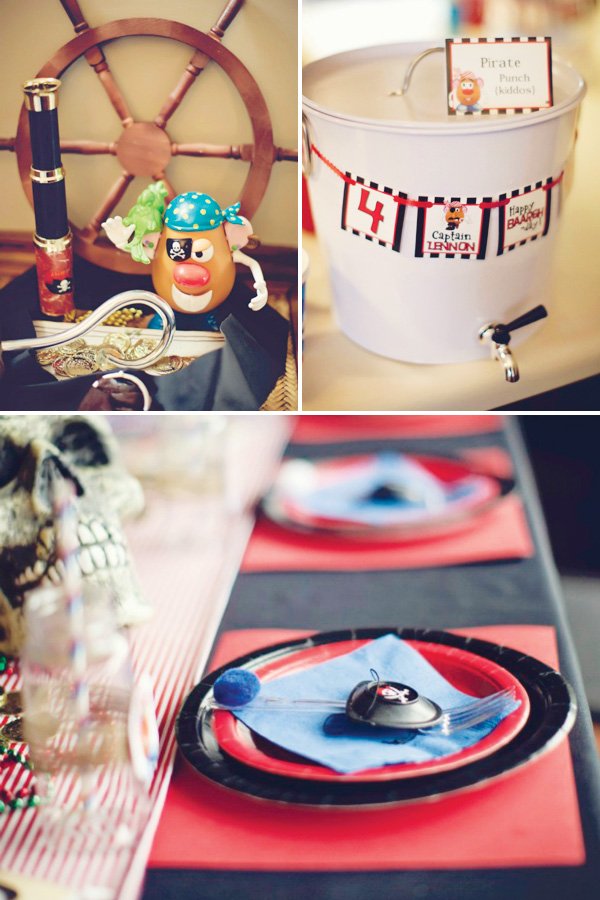 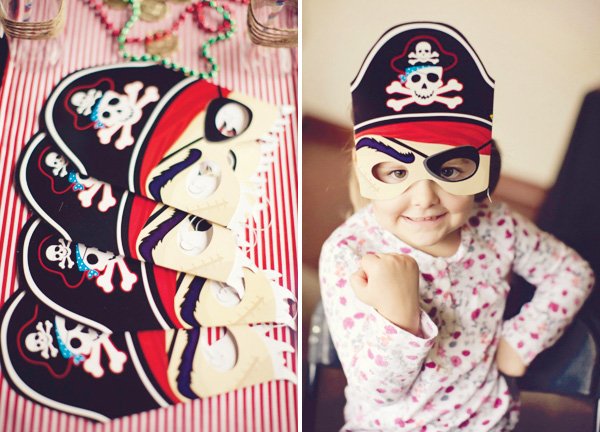 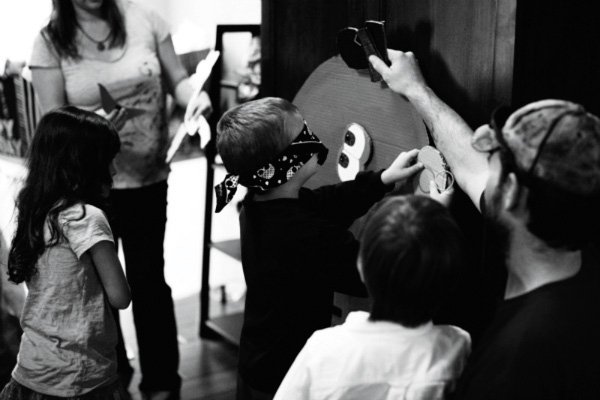 PARTY DETAILS, as told by Cineca…

My son’s first toy was a Mr. Potato Head and he has loved them ever since. For his 4th Birthday he was set on being a pirate. I loved the idea of a Pirate themed party, but I wanted to put a unique spin on it. I combined his love of Mr. Potato Head with his desire to be a pirate…and Wah-Lah…Mr Potato the Pirate was born.

I wanted to play on the traditional pirate colors (red, white & black) but also add some bold Mr Potato Head colors (blue, green, yellow.) I made the red & white striped table runners, and used a basic color palette of black linens and white overlays for the dessert, food, and kid’s tables.

For decorations, I raided the Halloween sections of my local Party City, Dollar Tree, and Target. I used gold coins, beaded necklaces, eye patches, gold candy, and bandanas as ‘pirate booty.’ Skeletons, swords, hooks, netting, Potato Heads dressed as pirates, and even a parrot were used as focal points in the decor. Many talented party friends created amazing works of art for the party; including Kandy Kones by Superchick Studios, pirate peg dolls from Crossing the Bugger-Dixon Line, mini cake banners from Truly Chic Inspirations, and cupcake wrappers for the petit four ‘treasure cups’ by Creative Juice. The custom printables (invitation, banners, food tents, and labels) were designed by Piggy Bank Parties.

What’s a Mr Potato Head party without a ‘Build Your Own Spud’ Bar?! There were potatoes and all of the yummy toppings: shredded cheese, bacon bits, sour cream, and ranch dressing. Along with the potatoes, we served our favorite BBQ. There were smoked chicken & pulled pork sliders, BBQ Baked Beans, and of course, Pirate Punch (a kid friendly version and a Rum Punch for the adults.)

My sweet lil pirate loves goodies as much as the next pirate, but I usually keep the sweet treats to a minimum…except on his birthday! We had so many wonderful sweets. Fondant Topped Oreos, Pirate Petit Fours served on treasure cups, a Tie-Dyed Birthday Cake, custom Fondant Mr Potato Pirates, and Mr Potato Pirate Cake Pops.

Since it was a yucky, rainy day and the party had to be moved inside, we kept the kiddos busy with a fun game of Pin the Pieces on the Potato Head. We created a large Potato Head out of cardboard and attached velcro to the pieces. The kids were blind-folded and had to attach the pieces in the correct positions. That game was almost as much fun to watch as it was to play.

Hi, I’m Alyssa, and I love seeing all the inspiration on HWTM! Aside from my obvious love of design, parties, and blogging, here are a few random things about me: 1.) I’ve done 3 triathlons. 2.) I’m from Miami, Florida but live in San Diego now. 3.) My favorite HWTM printable collections are Baby Bistro and Retro Rainbow.