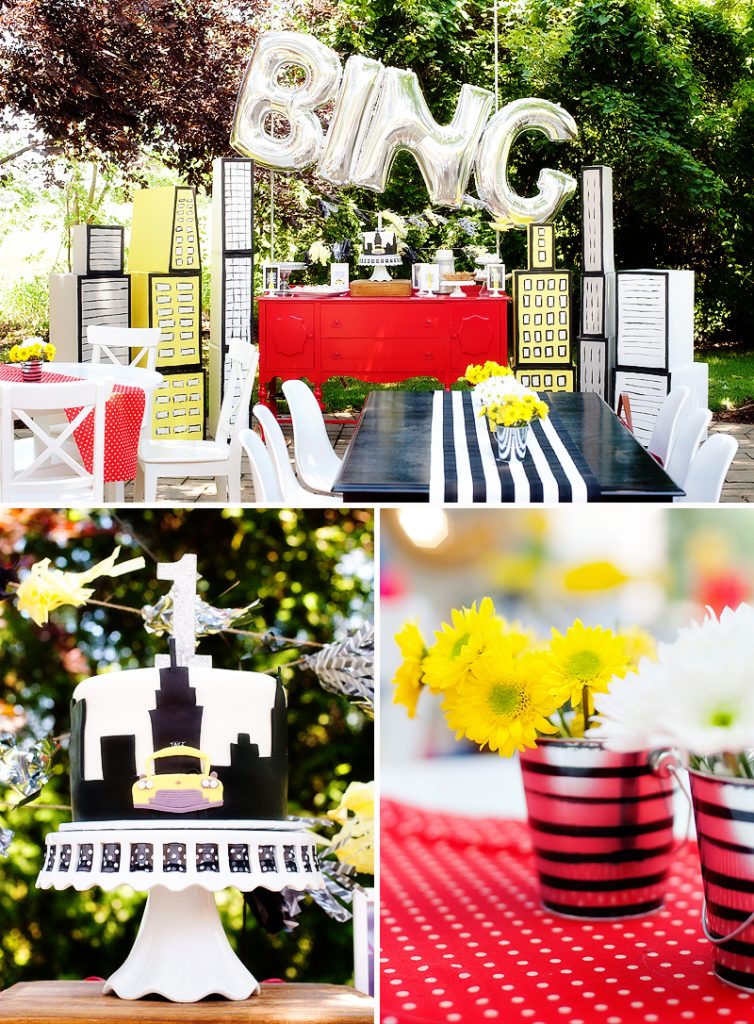 From the skyscrapers and fresh pretzels to the taxi cabs and liberty chips, Bingham’s party screams “I Heart NY”! Brandy Rammel of Pretty Plain Janes captured the lively city for her son’s New York City First Birthday Bash with playfully inspired graphic invitations and one of the cutest photo booths around – complete with a DIY Empire State Building prop/picture display. There are so many creative, bustling, bold city “sites” and street fare eats that I’m suddenly craving an NYC style slice (of pizza!) right about now! 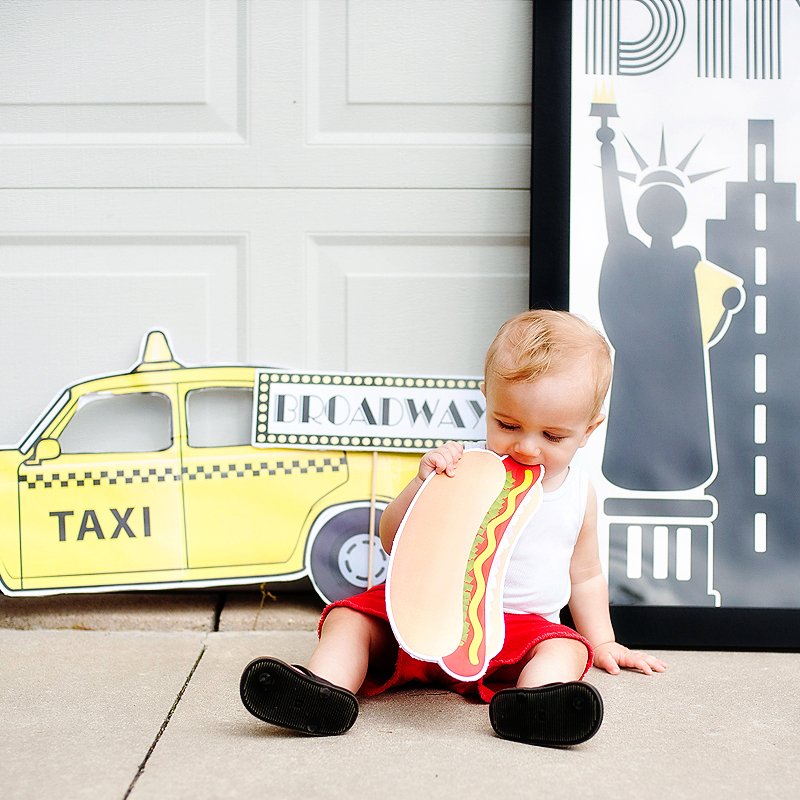 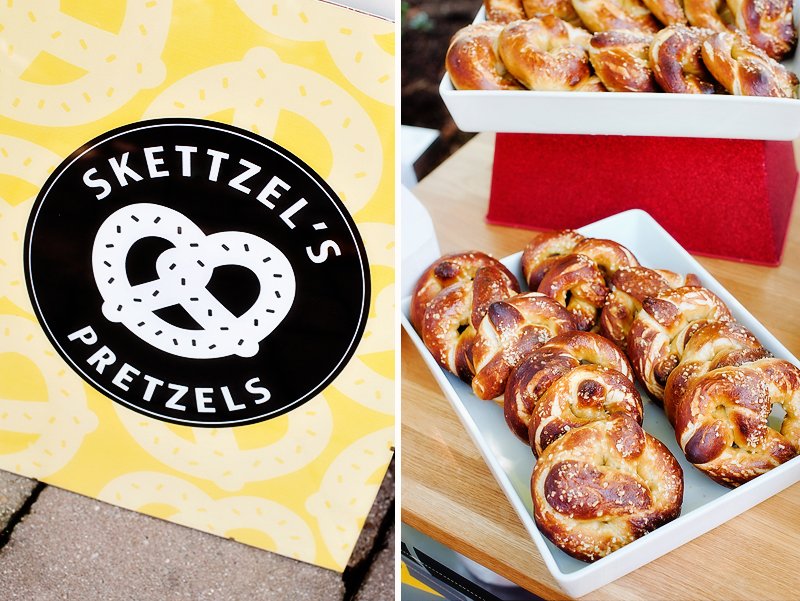 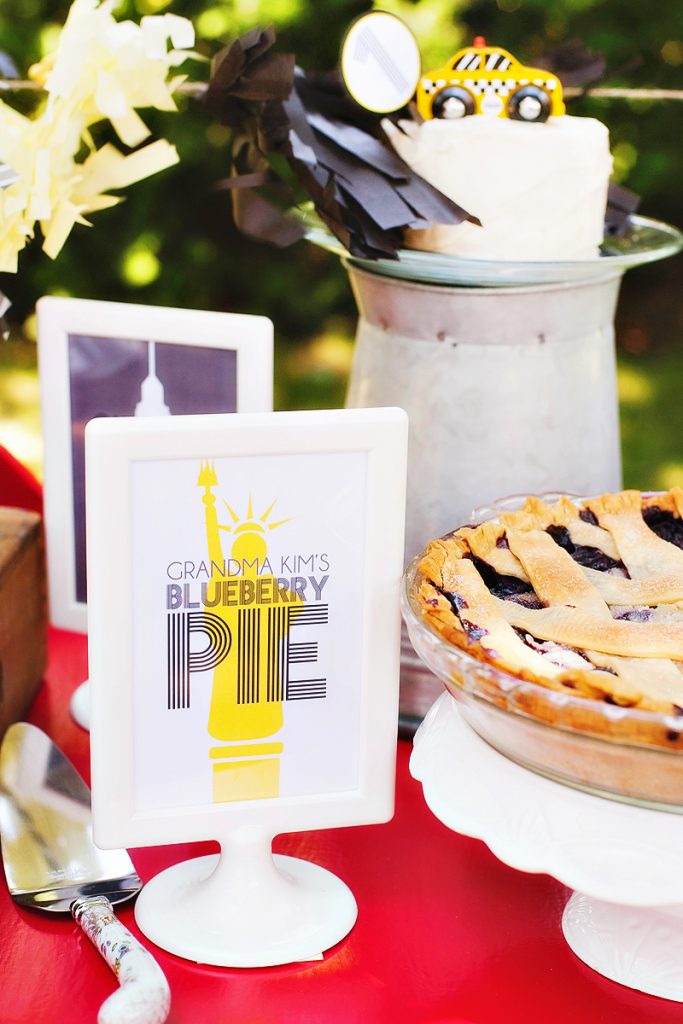 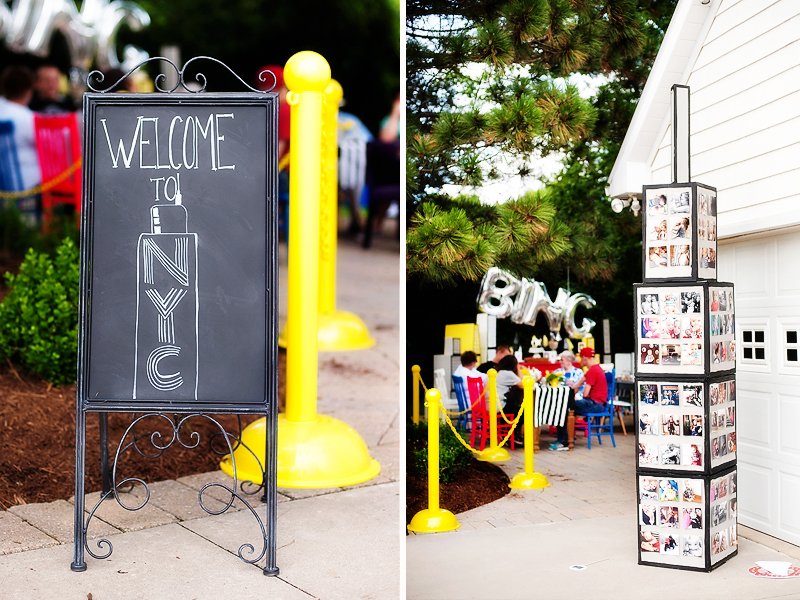 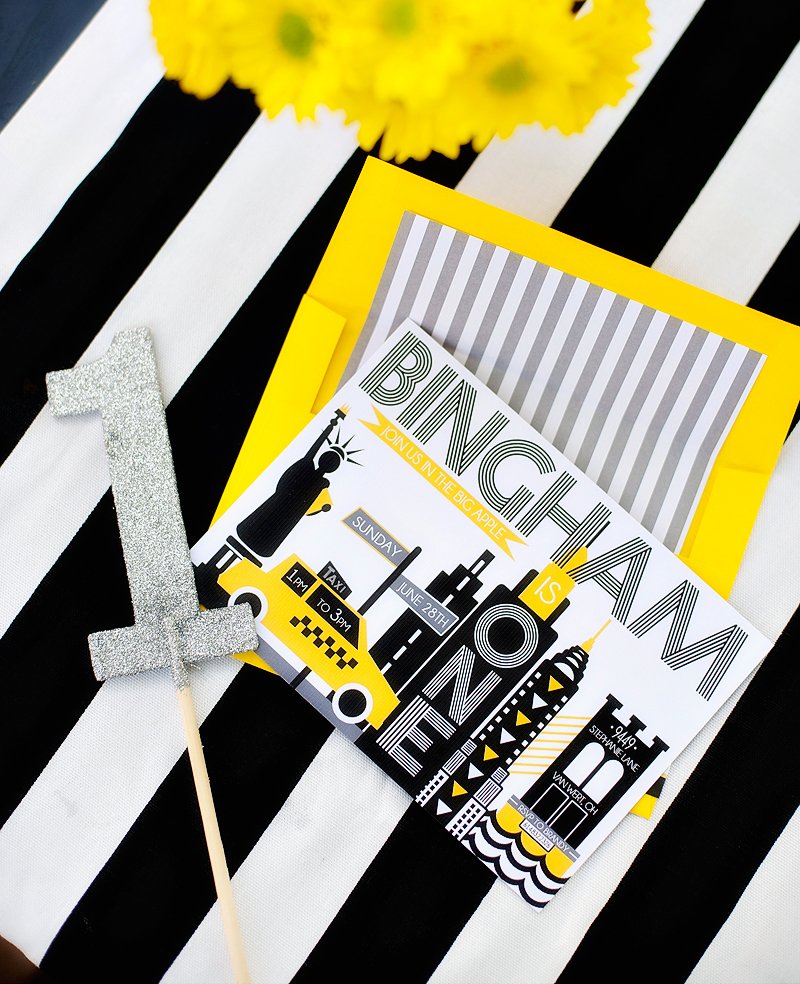 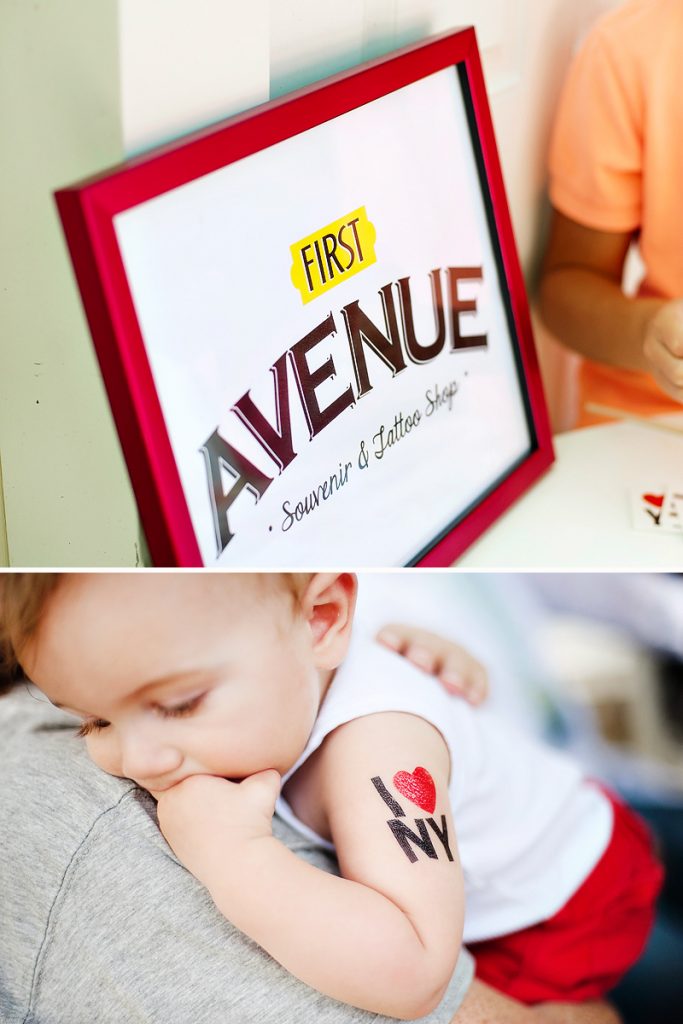 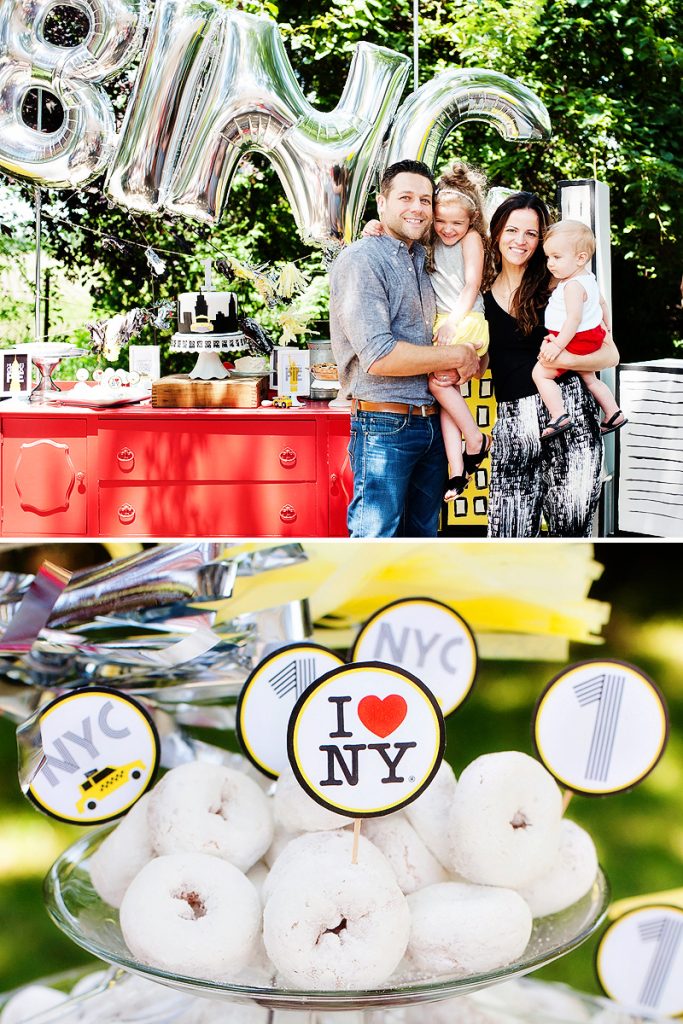 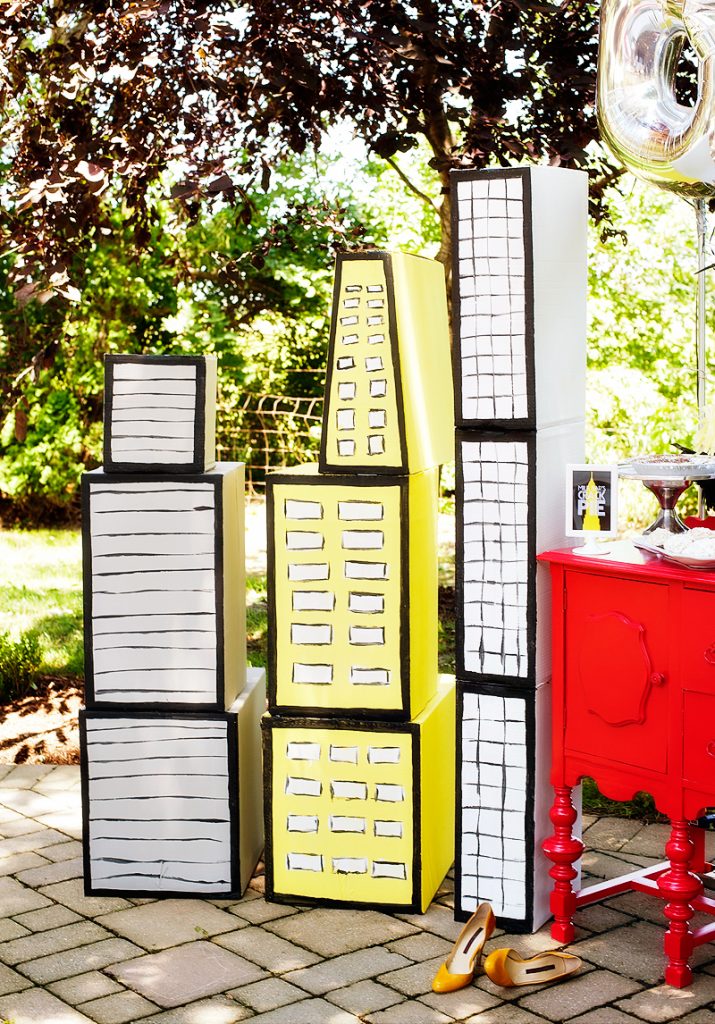 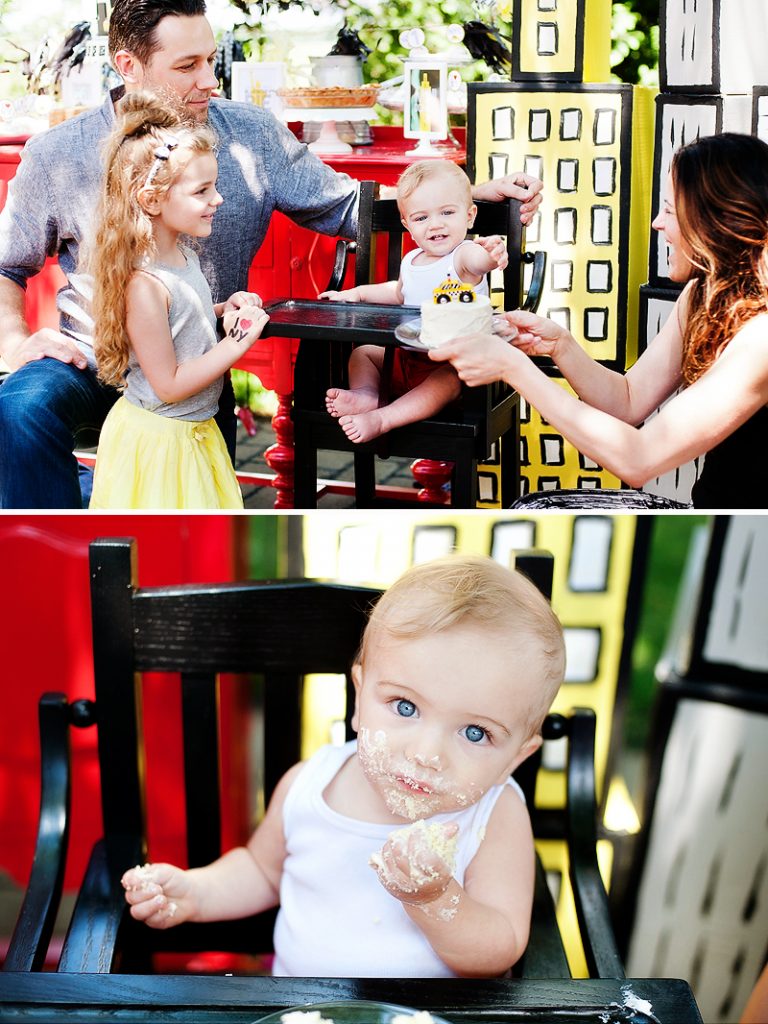 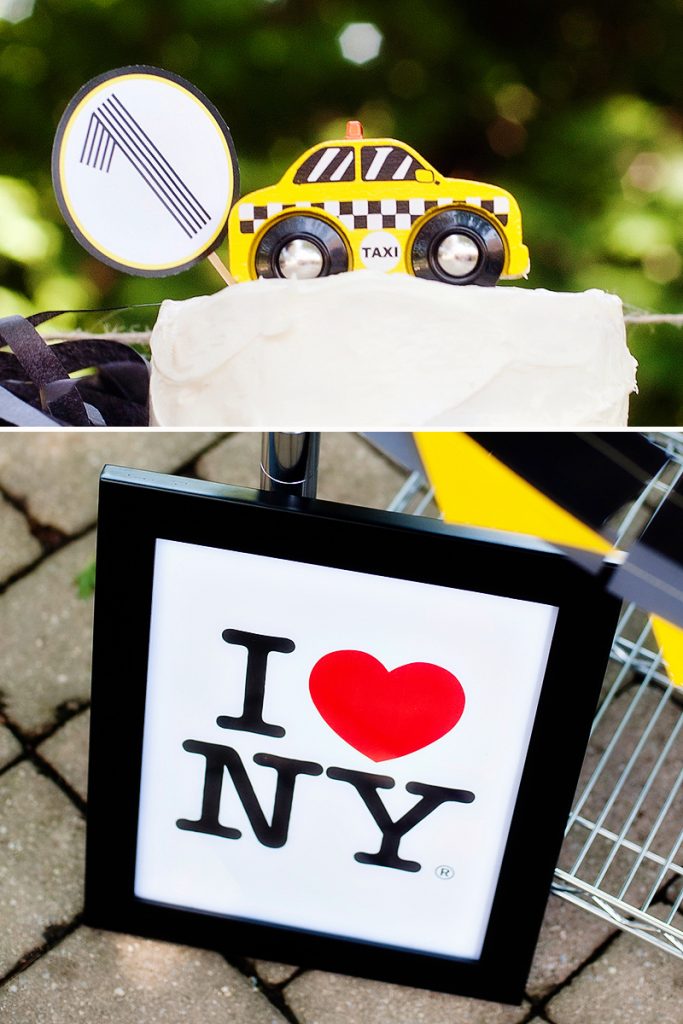 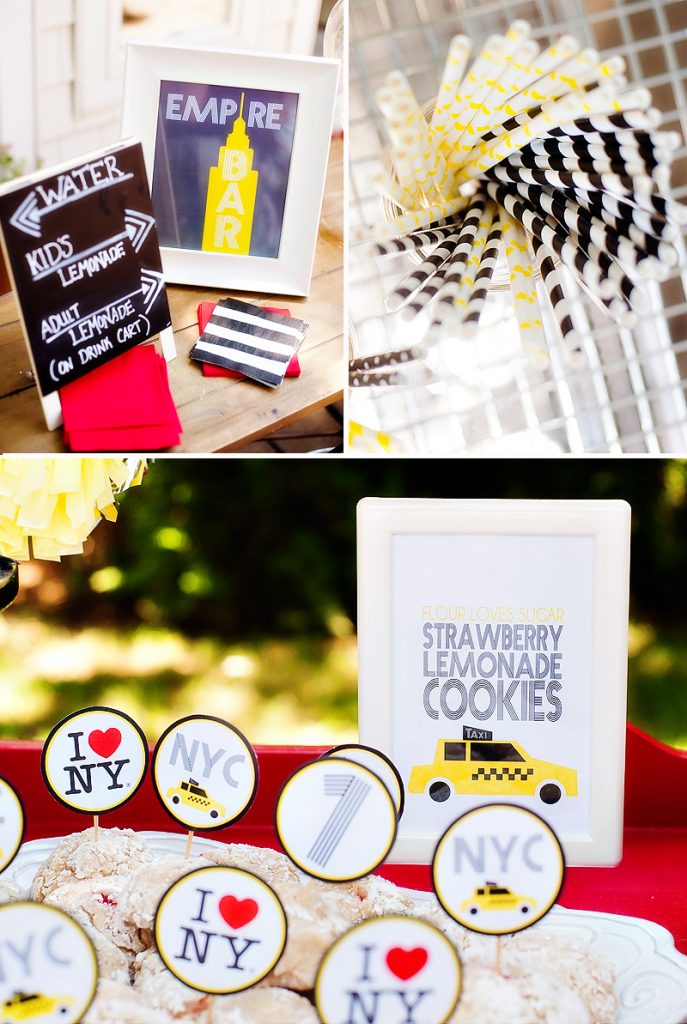 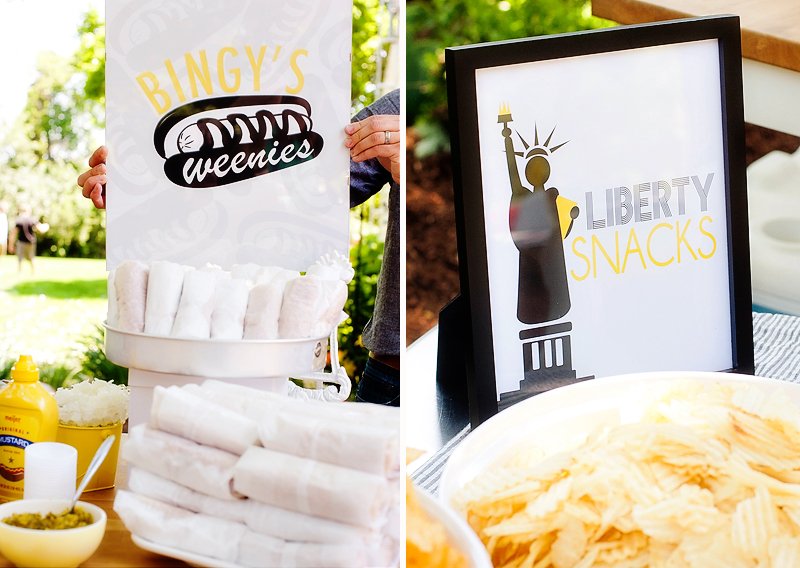 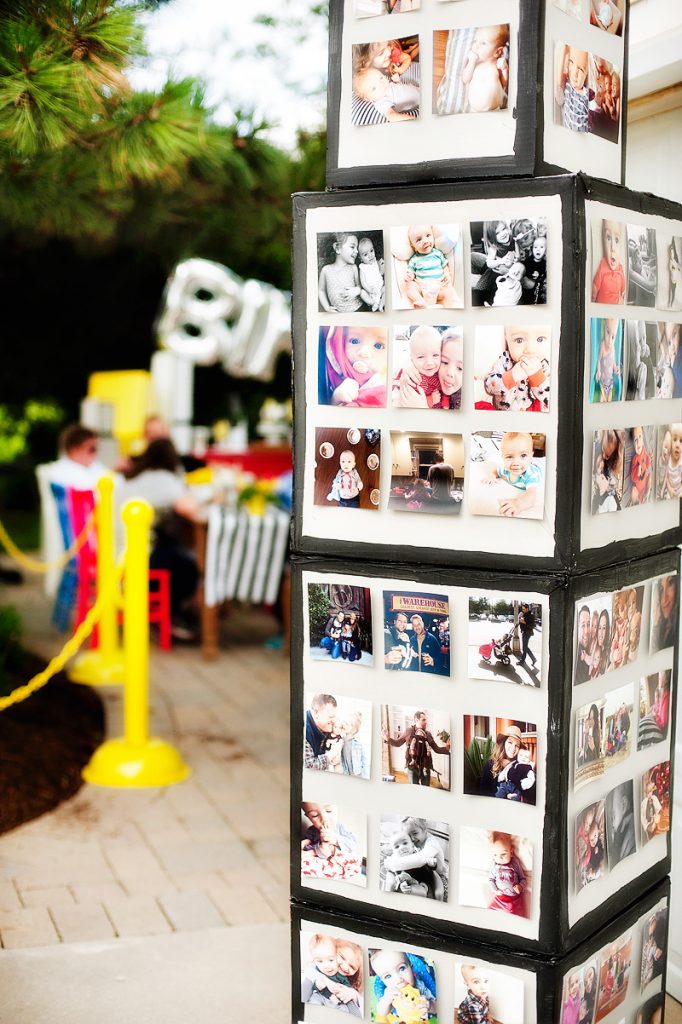 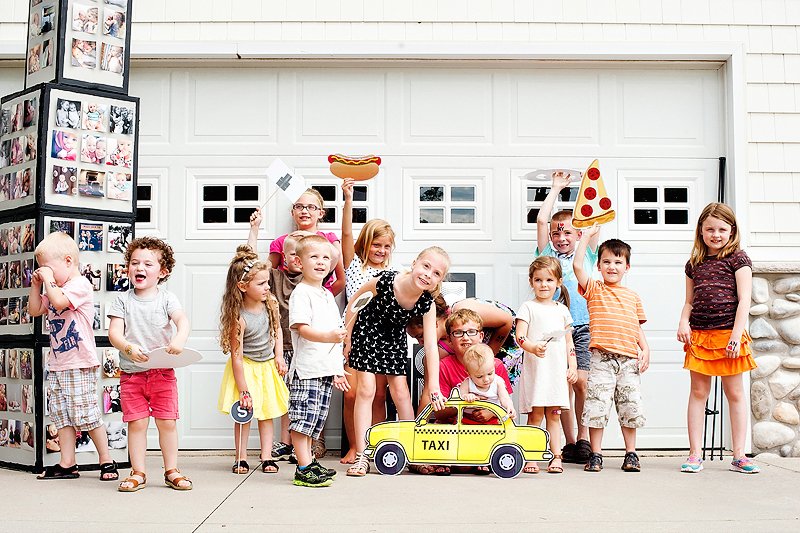 PARTY DETAILS, as told by Brandy…

New York City has  always been on the radar when it comes to party themes. Not only is it  my all time favorite city, but there are many elements to draw  inspiration from to make a celebration extra special. When it was time  for our little guy to turn the big ONE I knew there would never be a better opportunity for a NYC bash.

Early on I decided we need some buildings. All it took were some large cardboard boxes in various sizes, primer, paint, paint roller and  sponge brush. The building details were simple to do with black paint  and a sponge brush. We used hot glue to keep the buildings together  and stuck heavy objects in the bottom boxes to avoid any falling  buildings. Our guests were welcomed by the “Empire State Building” which had square images of Bingham in place of “windows”. The entire  project was a fairly simple DIY that provided a huge impact to the  overall party. I was thrilled with the way it turned out.

As for food we wanted to go the street fare route with large soft  pretzels and hot dogs. Everyone loved the play on words we did with  “Skettzel’s Pretzels” (his sister’s nickname is “Sketts”) and “Bingy’s  Weenies”. The pretzels I made in advance and froze so that all they  needed were to be reheated right before party time. The hot dogs we  cooked together in a crockpot and then placed in buns and wrapped for  the guests to easily grab.

The dessert table was filled with some of our favorite sweets as well  as a gorgeous NYC skyline cake (adorned with an adorable taxi cab). I  wanted something to fill the space above the desserts and between the  buildings flanking the buffet table – which is where the giant letter  balloons came in to play.

For the kids we had custom “I Heart NY” tattoos made and some fun  giant cutouts of typical NYC items. They both were a huge hit,  especially the tats.

It’s hard to say what I loved most about the party – the colors, the  food, the decor, our guests – it all turned out even better than I had  imagined. But at the end of the day it’s Bingham with cake on his face  that makes my heart sing. A party I will forever cherish and one that  would have never happened without the help of our friends and family!