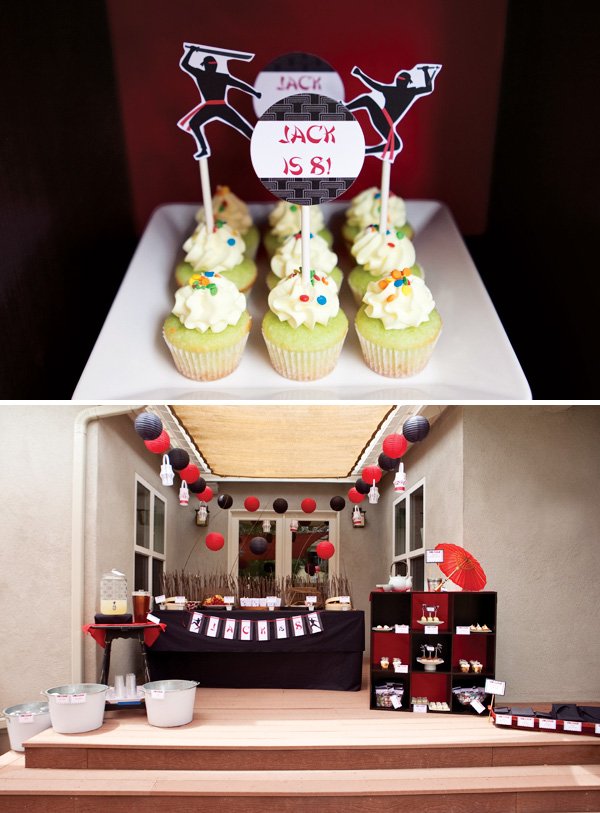 Hiya! Watch out for this Ninja Birthday Party by Abigail of Paper & Cake because it’s highly trained in AWESOME. ;) With red and black paper lanterns, ninja costumes & a super cool “Ninja Weaponry” cardboard sword making station, this party is quite the work of {martial} art! 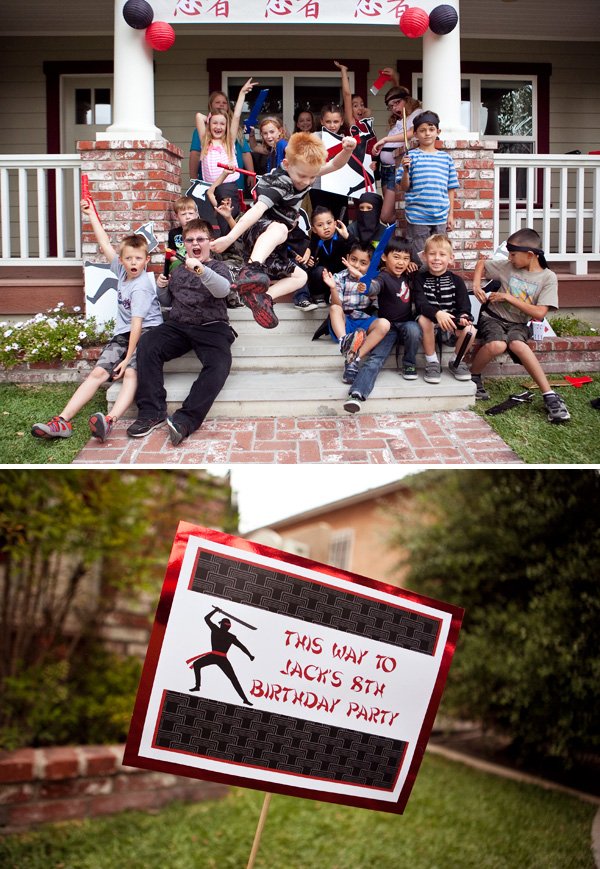 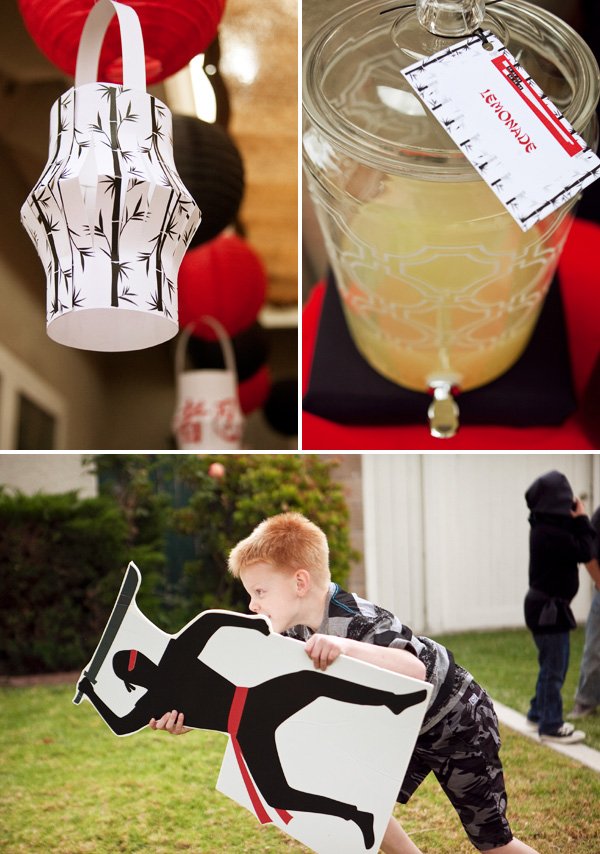 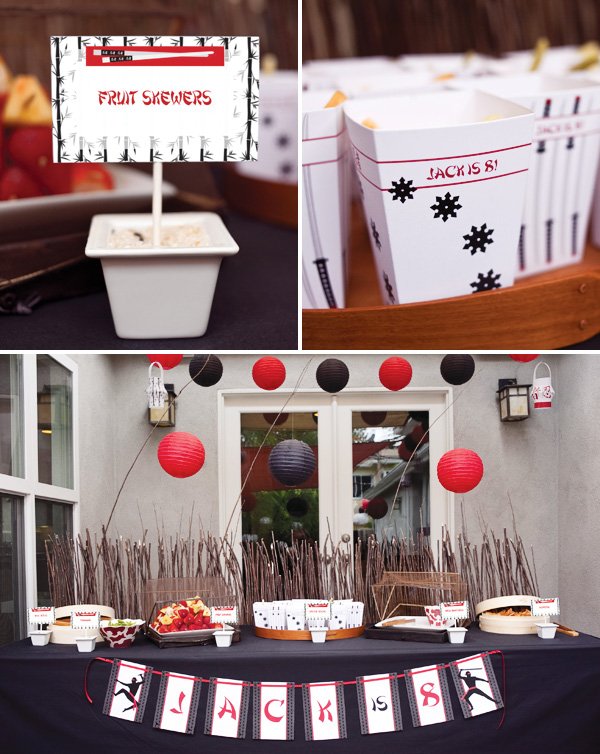 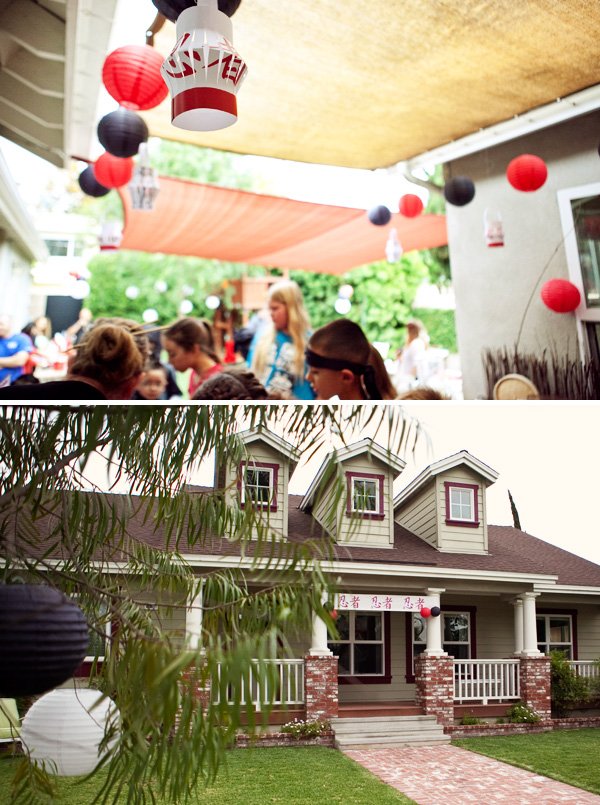 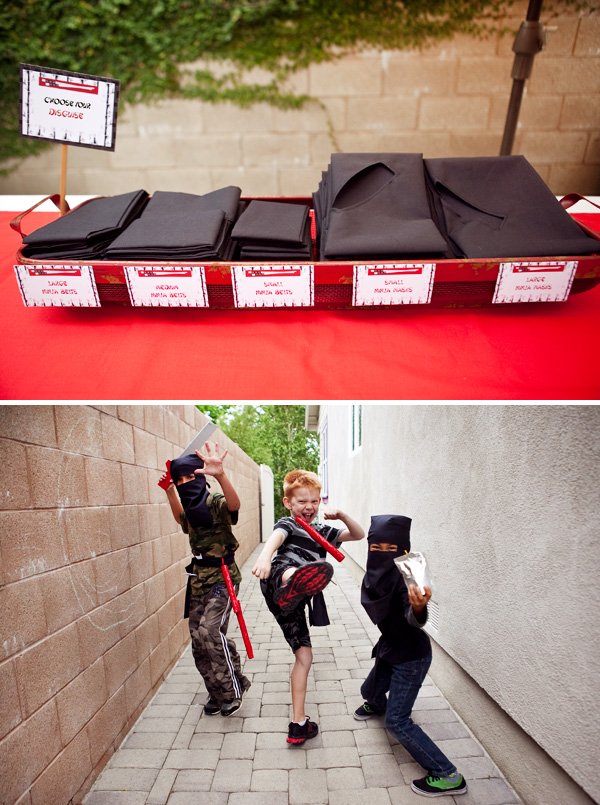 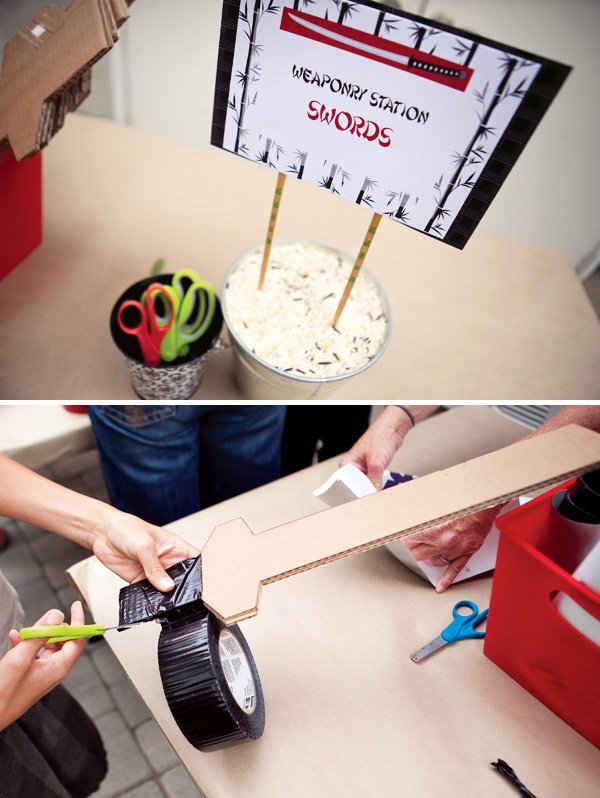 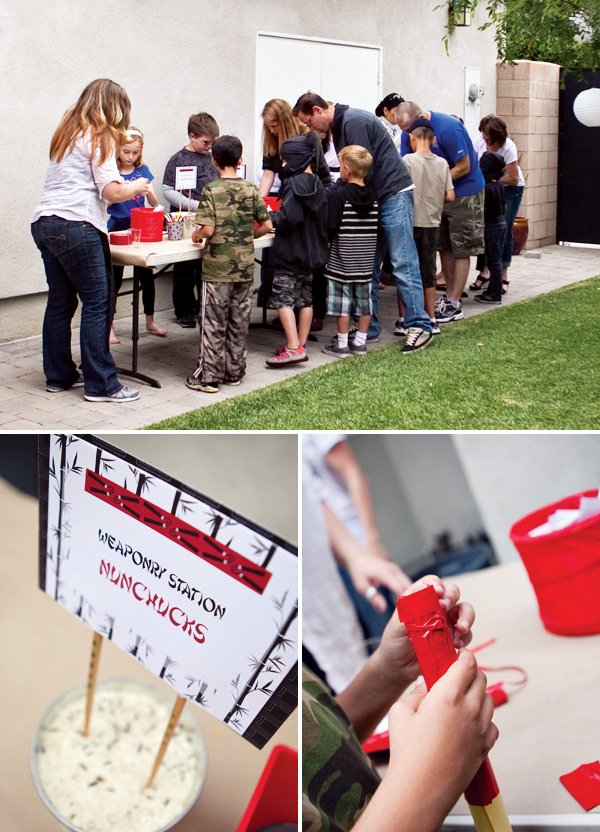 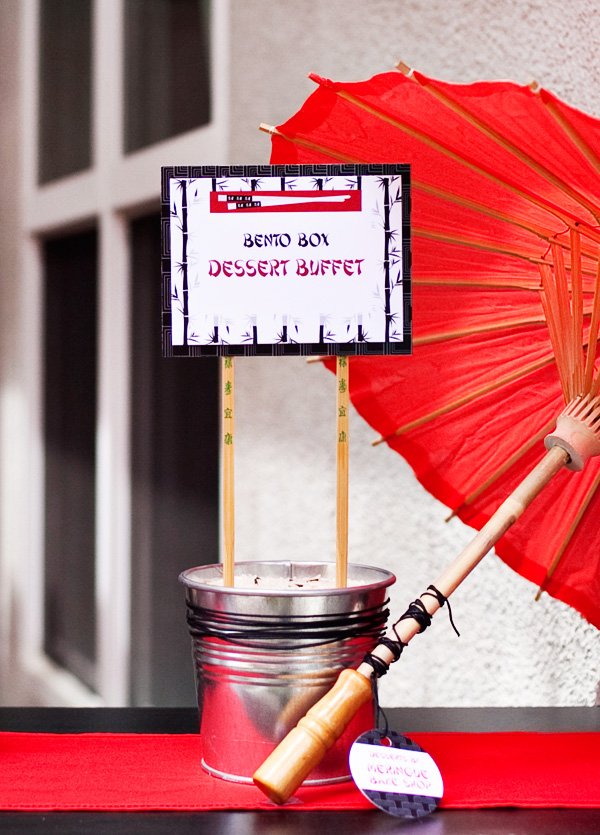 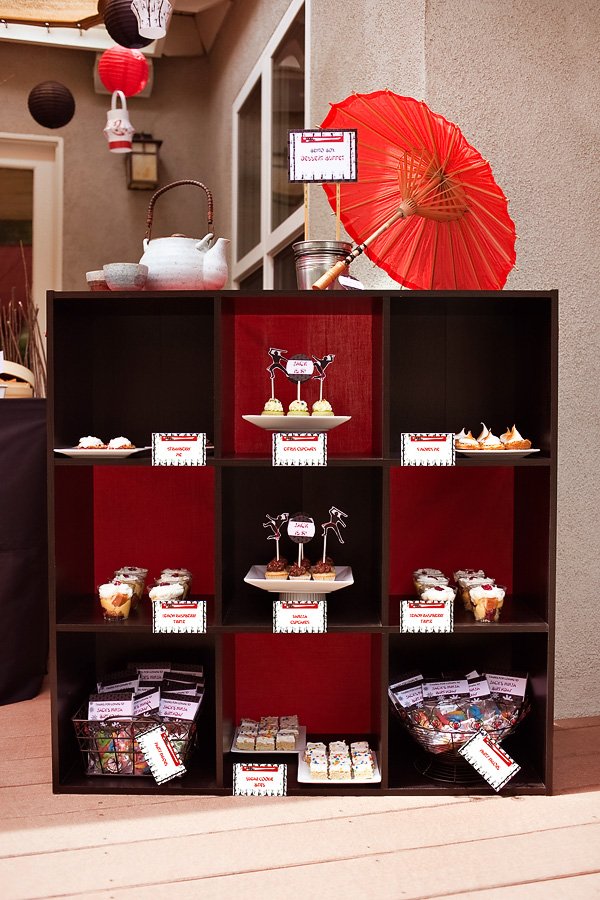 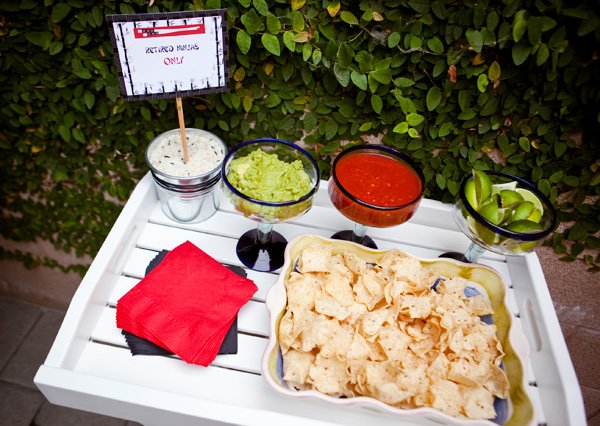 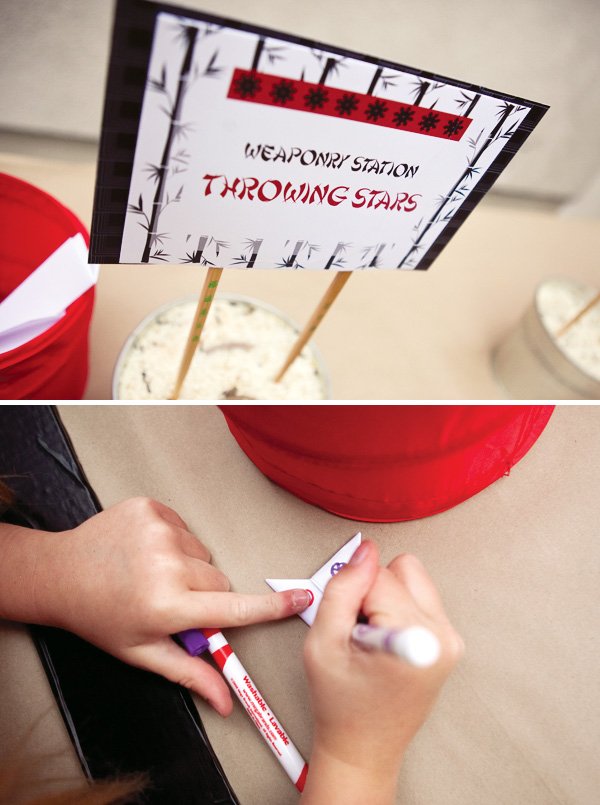 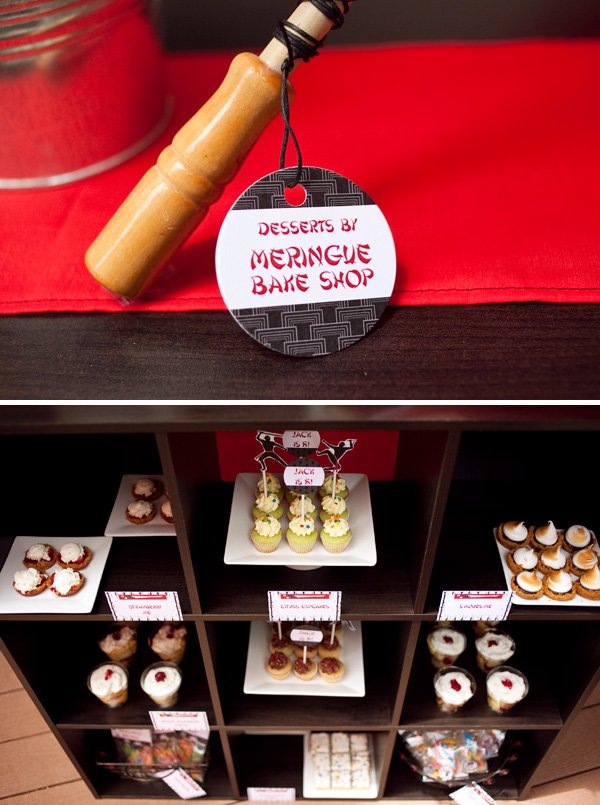 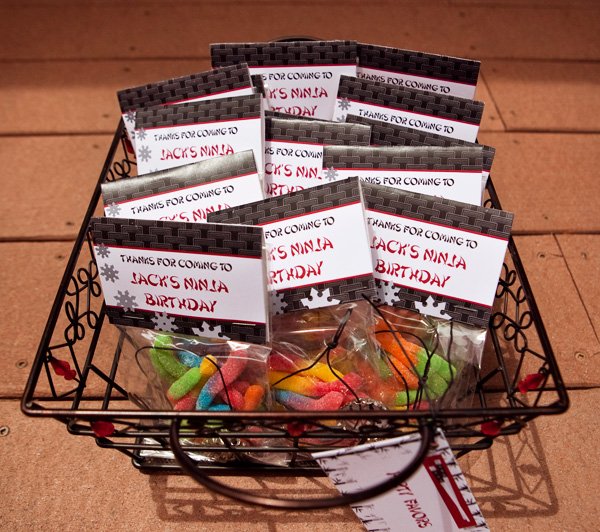 About a year ago, my son began taking karate lessons – as many 7 year olds do – and has ever since been completely obsessed with all things martial arts and ninja. So when his birthday party planning season rolled around, I pretty much knew what to expect! I began by working on the graphics of the printable set I would be decorating with, more specifically, illustrating the ninja characters that became the cornerstones of the design. I also drew up a party plan for myself – on a legal pad if you can believe it – sketching out what the party would look like and what items I already had around the house that could be put to use in his party.


When you live in Southern California, and have the opportunity to have your 8 year old son’s party OUTSIDE, then by all means have it outside! Setting these active kids up for success is always a goal of mine. Yes, make the party beautiful, themed, matching, perfectly color coordinated, but, remember who your guests are – and allow them to be comfortable and enjoy it!

We hung up a ton of round paper lanterns, and accented them with printed lanterns from our printable set to bring the asian flavor of this party together. Red broadcloth was cut into strips to make easy -and matching- table runners for our outdoor patio furniture.


Our old-door-turned food table may look a little familiar, as we have used it on many, many occasions. This time, we covered it with black broadcloth yardage (we didn’t sew a stitch on it), and backed it with a clever re-use of some sticks from another project – cut and hot glued to lengths of foam core. We added longer pieces of these sticks (originally purchased at Ikea), with round paper lanterns hanging from the tops. Inexpensive bamboo steamers from World Market acted as serving pieces to really drive home the oriental style of the tablescape. Because our party was set for after lunch, we went with lots of asian inspired snacks rather than a full meal. Mini popcorn boxes from our printable set were filled with veggie sticks (the potato snack kind), fruit skewers, cream cheese wontons and egg rolls rounded out the fare.

You saw it here first, a Bento Box dessert buffet! How fun is this? The cubbie shelf piece is just your standard storage unit from Target, dusted off and cleared of the kids toys. Pieces of the red broadcloth were added to the back of the unit where there was no backing, and we set a paper parasol, matching signage, and a Japanese tea set from my own collection on top. Just look at all of our mini desserts! These were made by Kristin of Meringue Bake Shop and featured my son’s request of a citrus flavored cupcake, with the added bonus of little pies, little trifles and little cookie bars. We also placed baskets of party favor bags, filled with sour gummy worms and bottle cap charms made from the printable set.


We could not skimp on dress up for this group of ninjas! Hand made masks and belts accessorized with paper swords and nunchucks were exactly what my son wanted at his party – well maybe he wanted real weapons, but you have to draw the line somewhere. The paper weaponry making stations were so much fun! Pre-cut cardboard sword shapes were ready for the kids to wrap in colored duct tape, paper nunchucks made from pieces of rolled up card stock, also got wrapped up in the duck tape. We also had a tutorial in how to make paper throwing stars, thankfully, I had several pre made stars on hand because it was not an easy folding task.


It’s not a party until 20×30″ paper ninja cutouts get nunchucked to death. Really. I made up six of them for a couple of different activities with the party guests, and I have to say, I had no idea they would be so popular! We started with a game wherein the kids would go 2 at a time through a course of ninjas that the kids had to knock down with their paper weapon of choice. Again and again, the kids ran through yelling and knocking and stomping and smiling! When they finally grew tired of that, we did a “Save the Ninja” relay race. Two teams split up in three sets – the first group each run with a ninja cutout to the second group where they hand off their ninja. Then those second groups run again with the cutouts and to hand off to the third group who run their ninjas all the way back to the first group. Repeat. Then repeat again. And keep going because there is no end, and no winner, just a bunch of running as fast as they can kids!