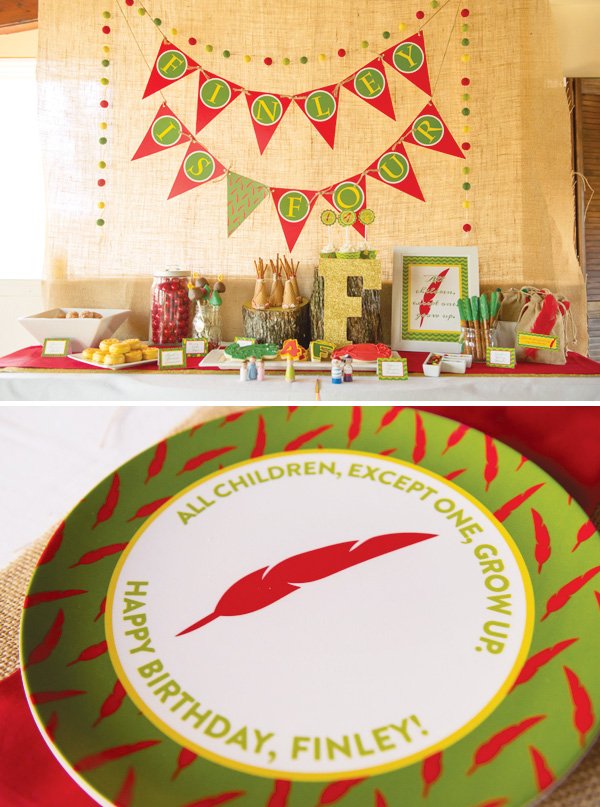 All Children except one, grown up. Rachel of RV Parties, designed the most magical party for her birthday boy Finley! Her AMAZING Peter Pan Party {+ Kids Costumes} with a natural color palette + hints of gold, adorable red feather inspired printables and insanley creative treats has me flying! 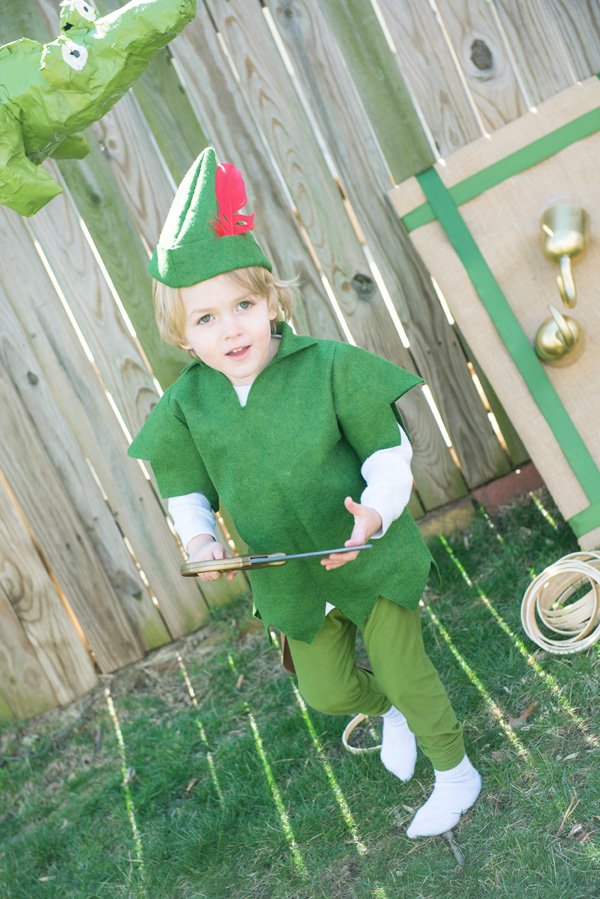 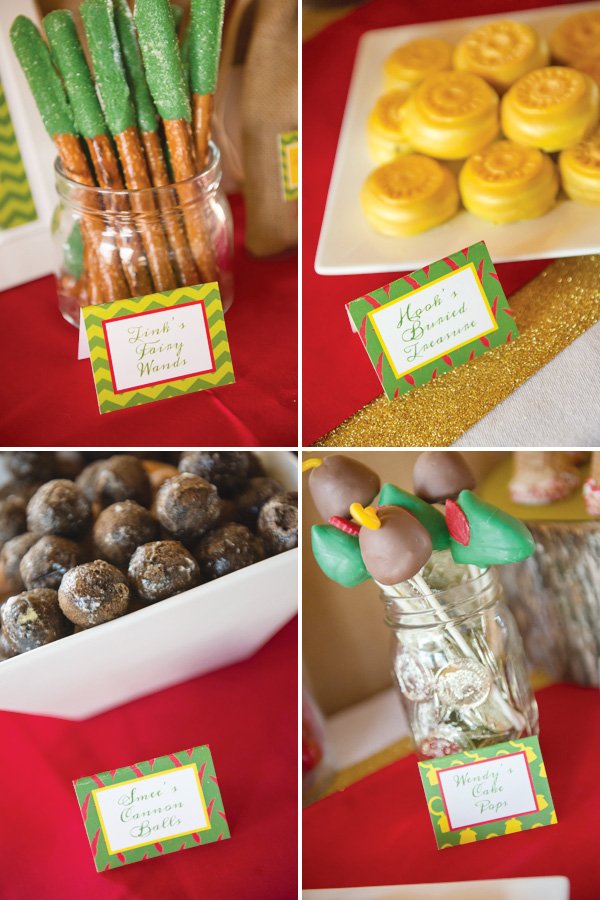 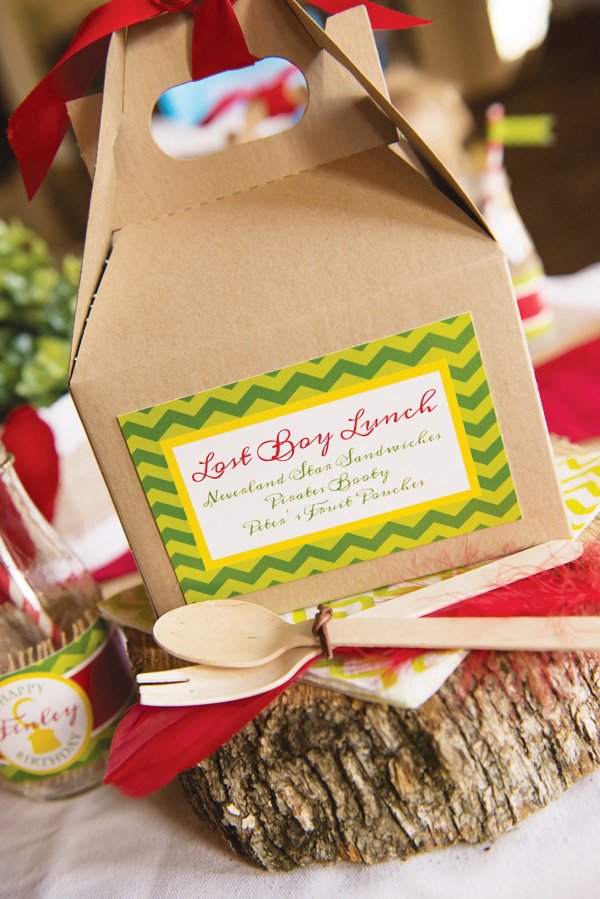 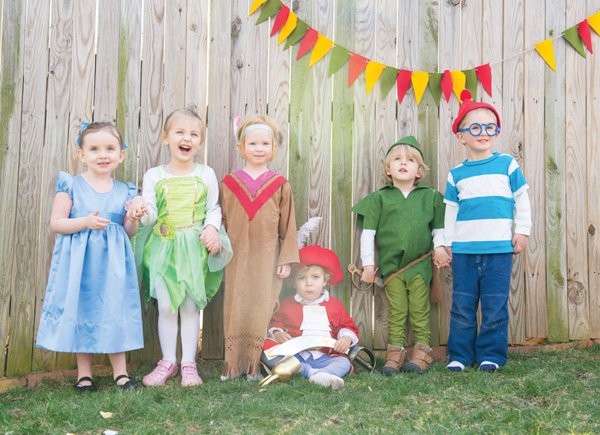 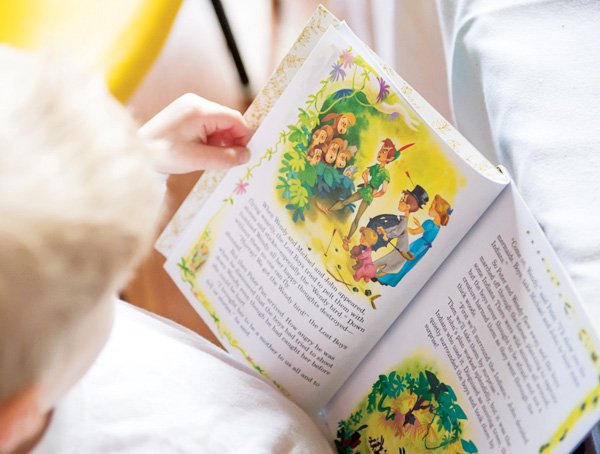 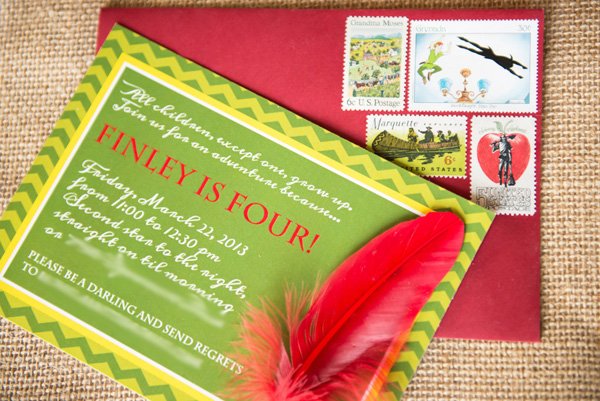 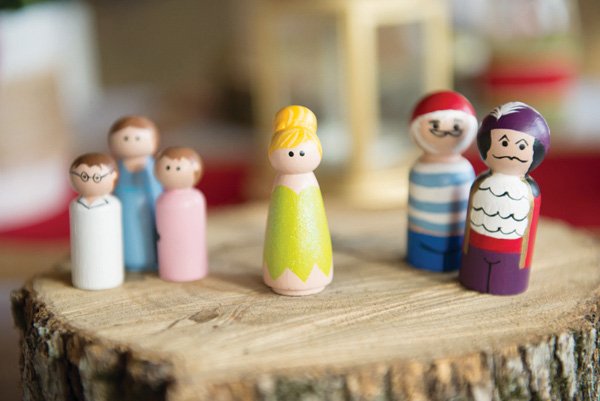 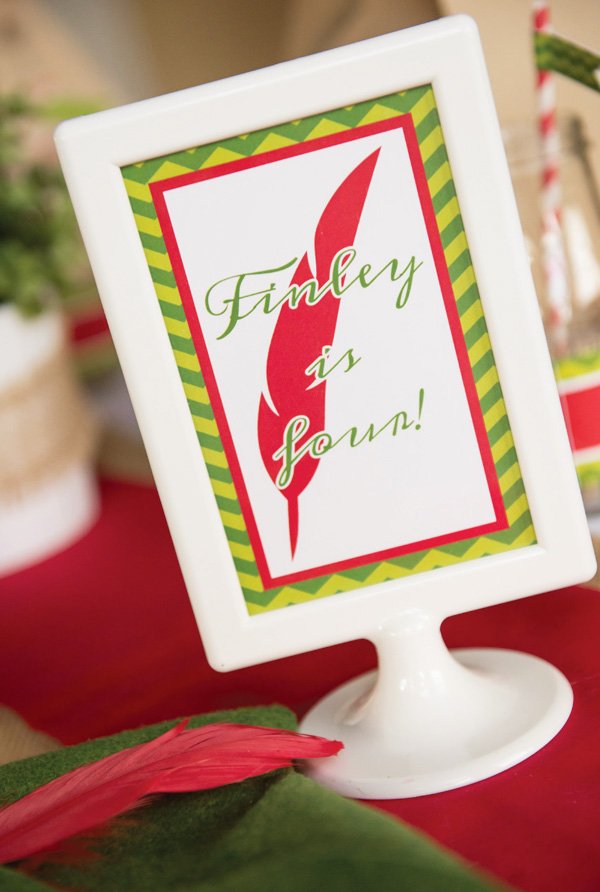 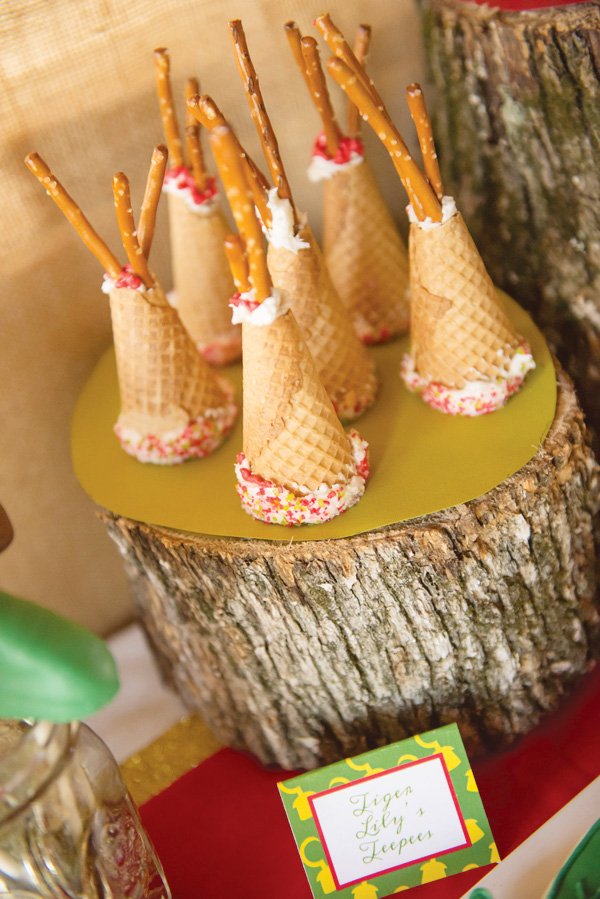 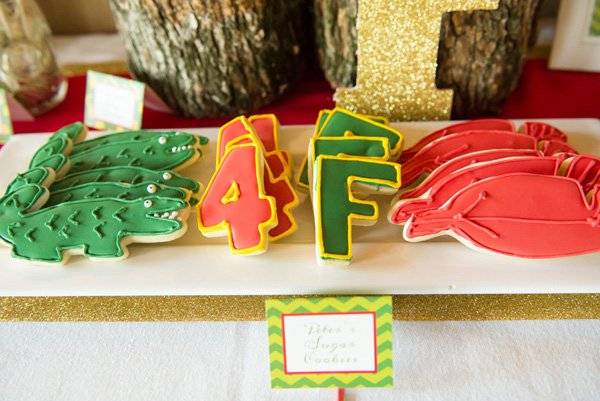 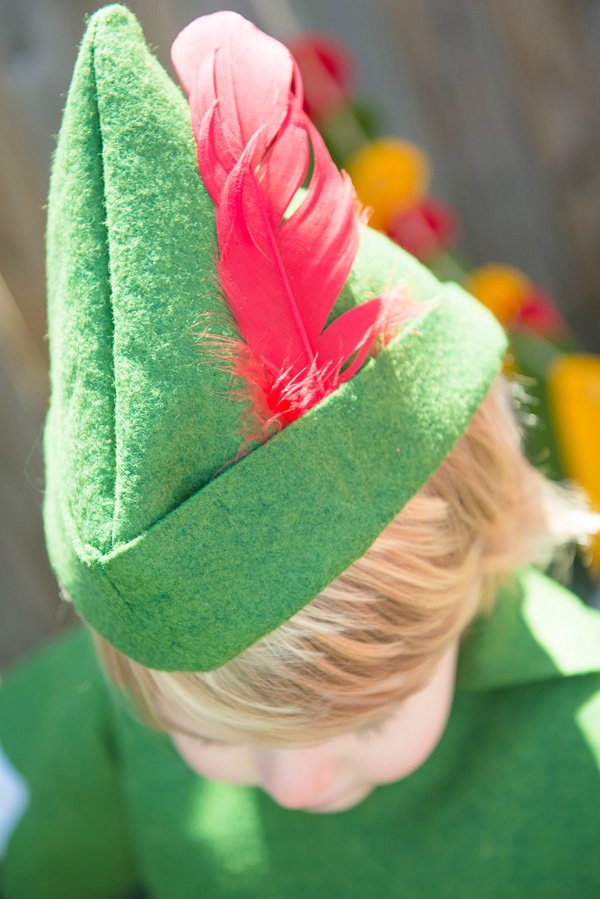 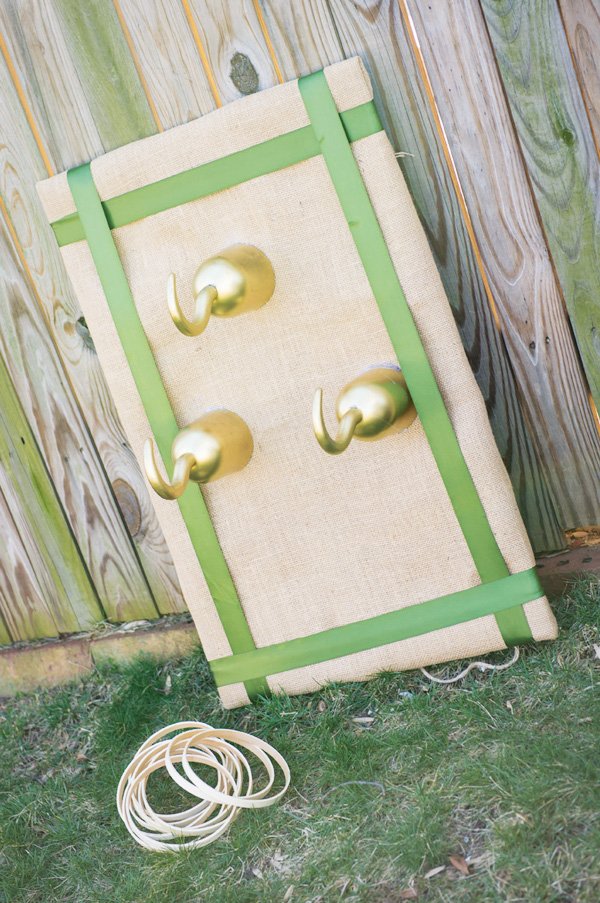 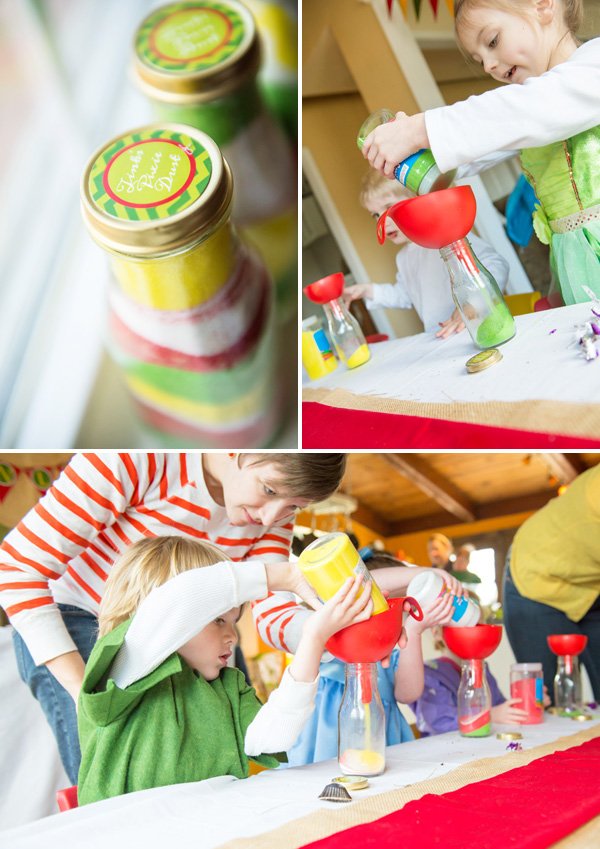 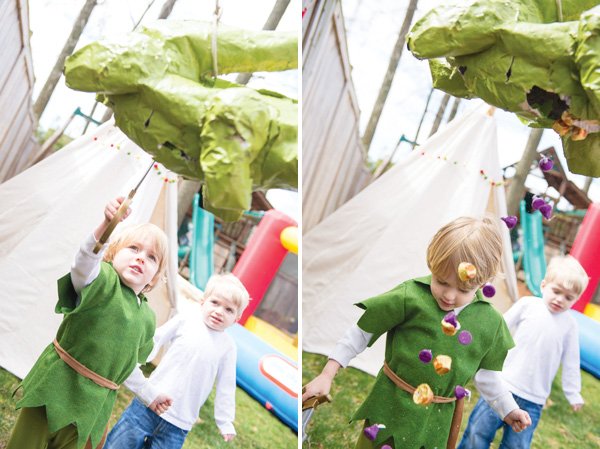 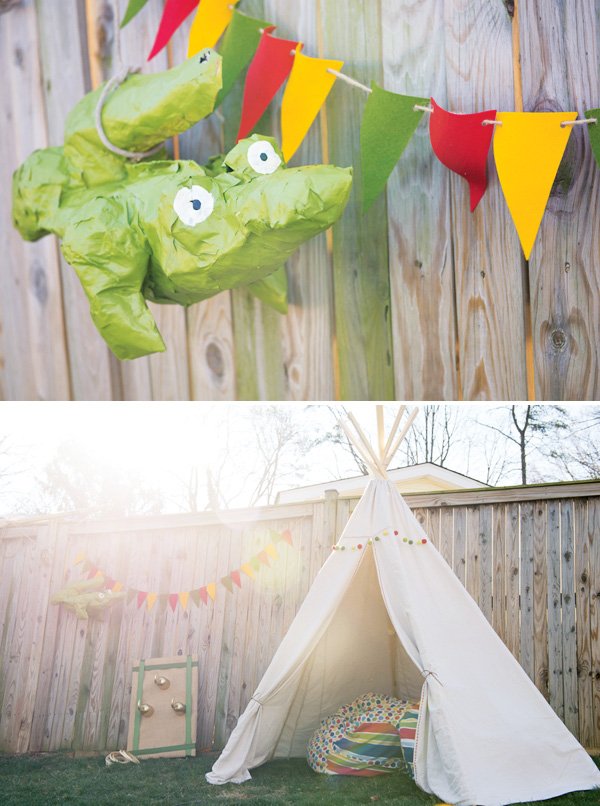 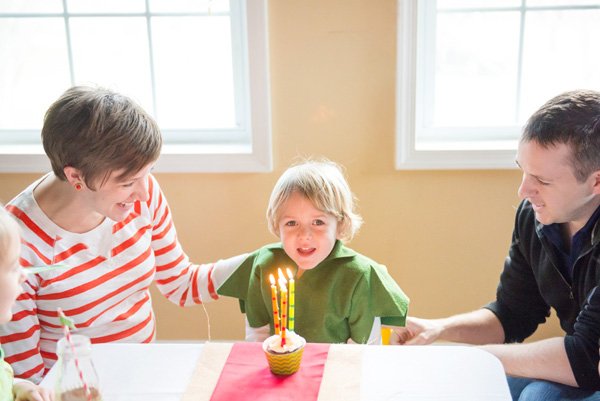 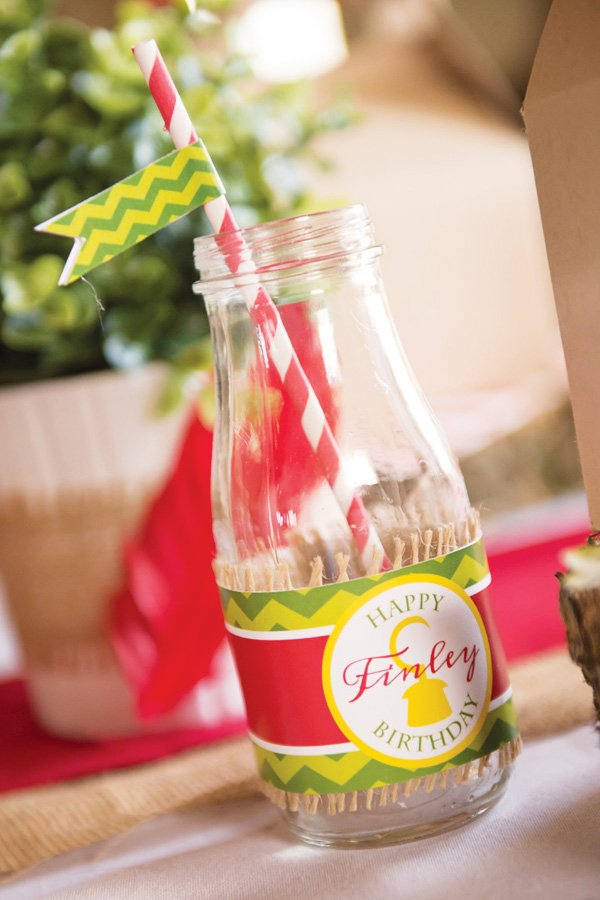 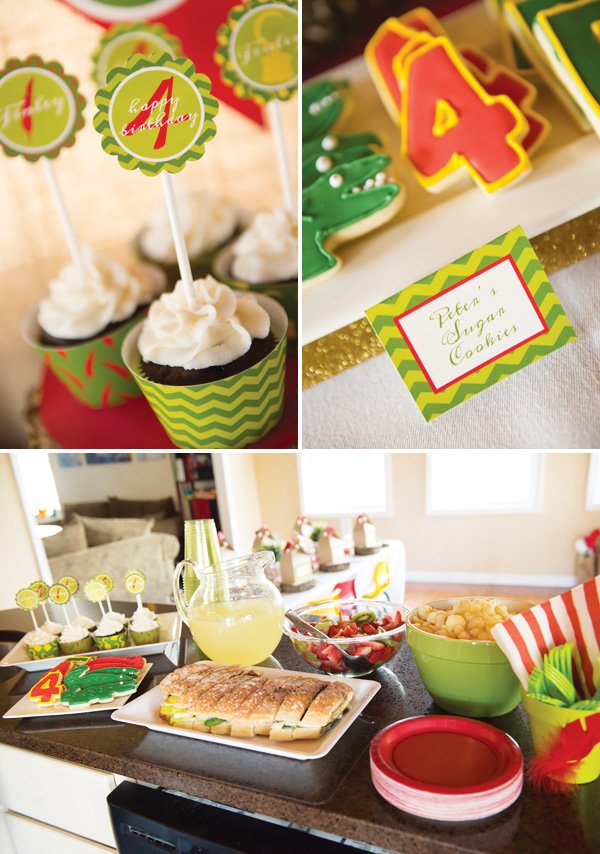 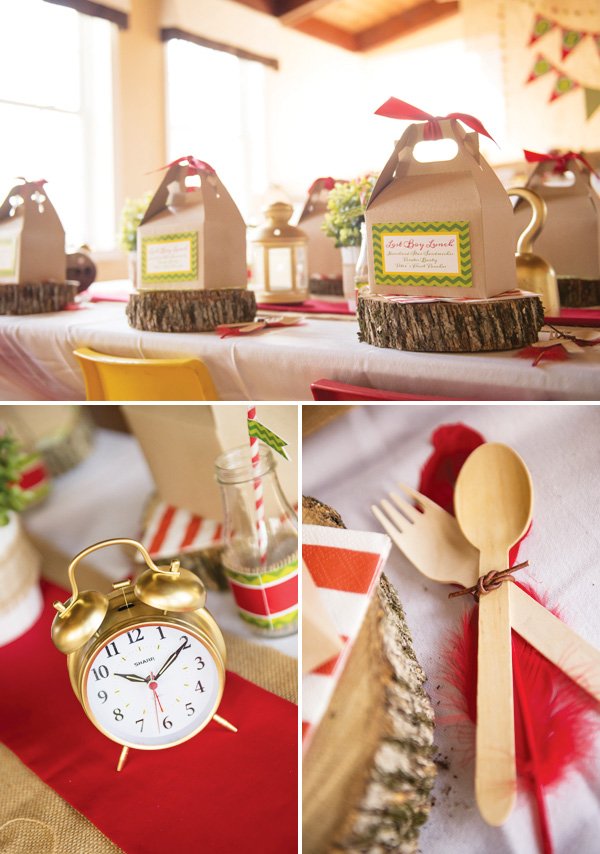 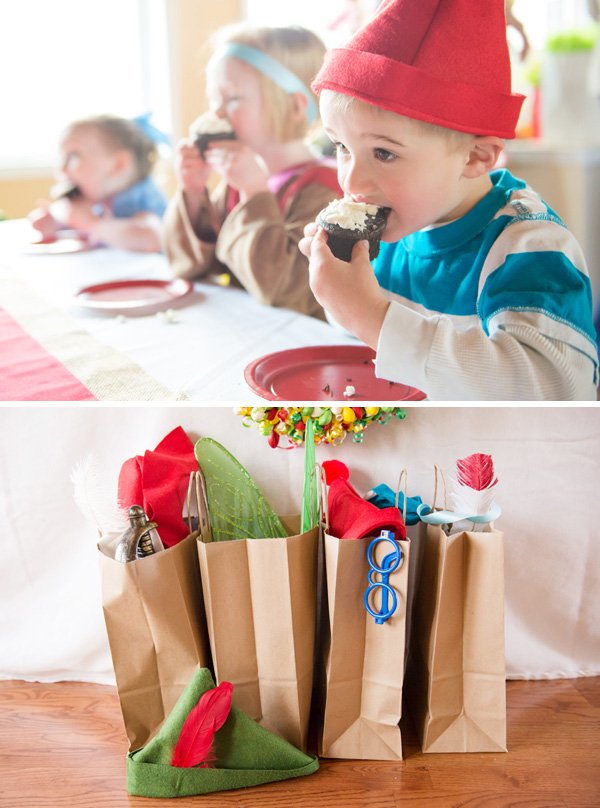 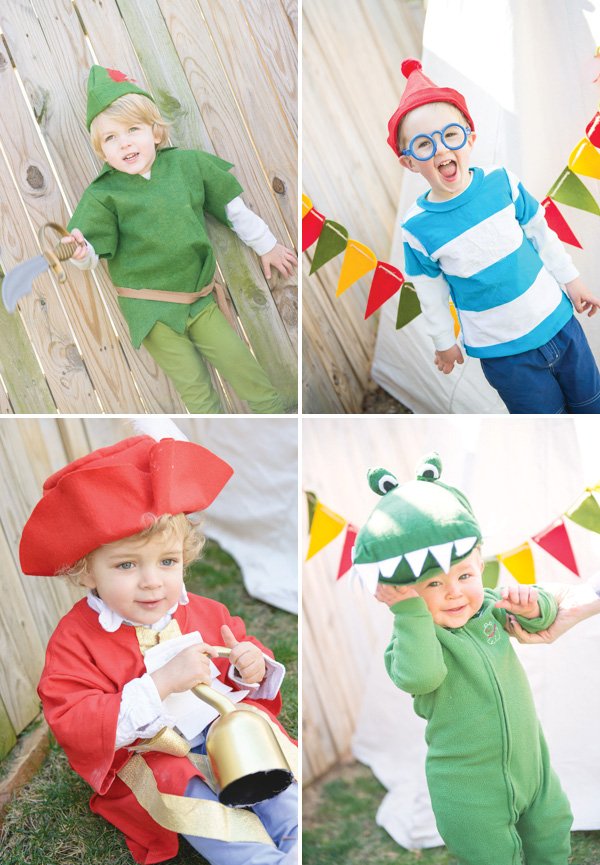 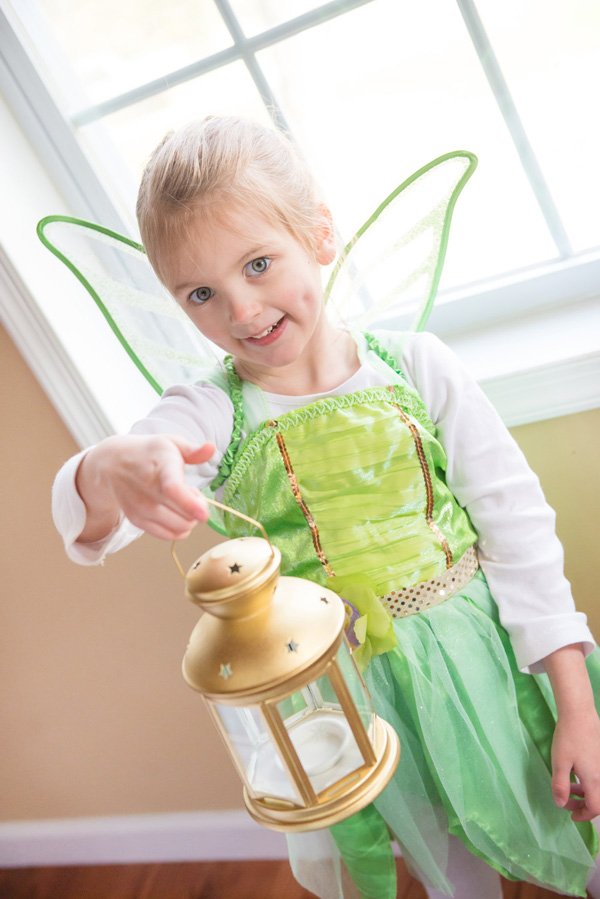 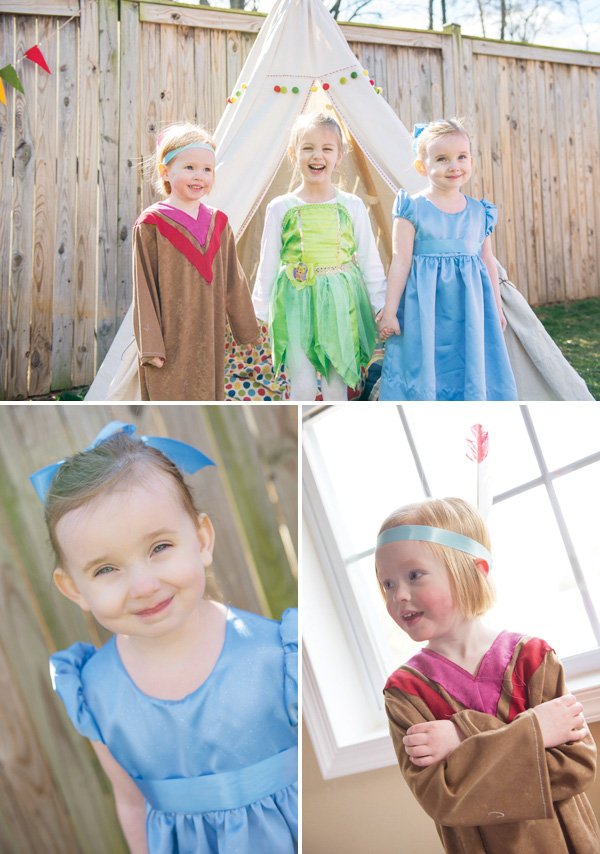 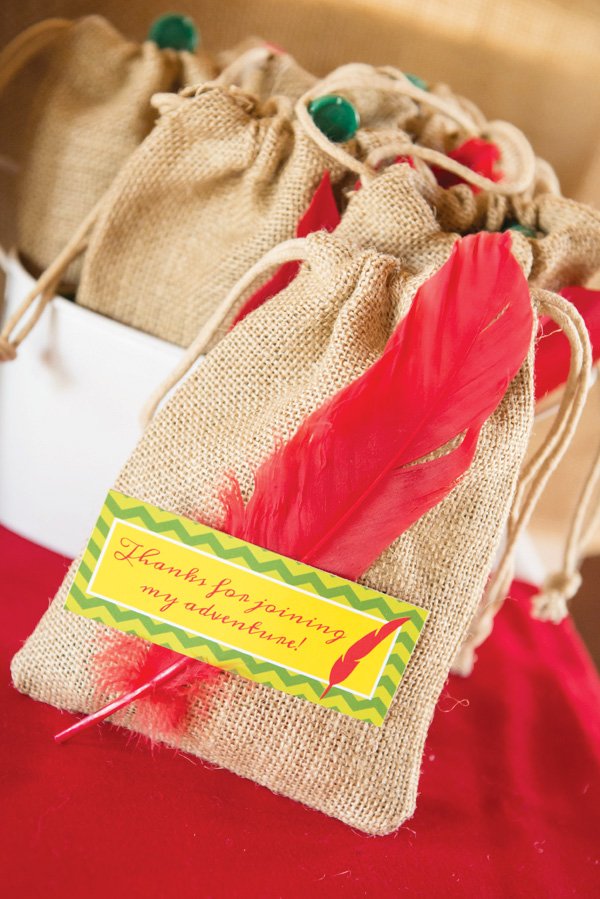 PARTY DETAILS, as told by Rachel…

THEME
After watching Peter Pan countless times with my son, throwing him a Peter Pan themed party seemed like the natural thing to do.  I kept the palette of the party natural–wood, burlap, red feathers, green and of course gold. The invitations set the tone for the party–two tone green chevron, a red feather and vintage stamps made the invitations almost too fun to send away! We also hand delivered the Peter Pan Little Golden Book to all the guests before the party so they could familiarize themselves with the story beforehand.

COSTUMES
I was so excited to host a party I could make costumes for–and Peter Pan is a perfect one for it. So many characters to choose from–I wished I could have made more. My son adored his Peter Pan costume and wore it for days afterward! All the costumes were varying levels of handmade–from Tinkerbell’s costume on eBay to Tiger Lily’s completely handmade one. I packaged each guest’s costume for them in a paper bag so they could easily change when they arrived and join us in Neverland. Details like the crocodile’s head, Captain Hook’s hat and Wendy’s dress still make me smile.

ACTIVITIES
Activities were so fun to brainstorm for the party–our two big ones were a sword fight with a crocodile pinata and making Pixie Dust sand art in bottles. A few guests were a little disappointed that they weren’t able to fly with their Pixie Dust–but we were able to convince them that jumping in the bounce house was almost as good!  Spray painted hooks made for a fun ring toss–and the kids enjoyed playing in the teepee when they needed a bit of downtime.

KIDS TABLE
I love setting a table–and I’m so pleased by how this one turned out. I was dead set on finding wood slices to use as chargers and on the dessert table as pedestals. Little tip: call local landscaping companies! I was able to meet a crew at a house where they were cutting down trees and they were happy to cut me off a few slices.  The gable boxes were perfect for holding the kids lunches–Neverland Star Sandwiches, Peter’s Fruit Pouches and Pirate’s Booty. The wooden flatware/feather/leather combo turned out cuter than I hoped, I loved the way it came together. For the table runner, I used a strip of burlap and spray painted objects from the movie gold–the Crocodile’s clock, the lantern Tink is locked in and the Captain’s hook. The adults snacked on pear, havarti and olive sandwiches, fruit and more Pirate’s Booty.

DESSERT TABLE
And no party is complete with a dessert table! I felt like I should send the kids home with an apology note for how much sugar we gave them. It was hard to pick a favorite–between the gold dubloons and the adorable cake pops, I was in heaven. I’m so lucky to get to work with Miss Lulu’s Sweet Treats on so many projects–her cake pops are the best I’ve ever had. We opted to use chocolate donut holes (rather than chocolate covered cake balls) as our cannonballs, a much simpler treat and just as popular. After handmaking six of Tiger Lily’s Teepees we struck it from our menu of kids’ activities. Four year olds were not going to be successful icing and decorating them. I’m also so lucky when Victoria (the V of RV Parties) is local–she makes the best sugar cookies and these were no different. Such a delicious and beautiful addition. The cupcake toppers and wrappers are always my favorite part of parties–probably because there is a cupcake inside them!

Trying to keep with our theme–we used burlap for the back drop and mixed in some glittery gold on the top of the dessert table. The felt ball garland adds such a big impact to the backdrop and teepee–I can’t stop imagining uses for them! The height added by the scavenged tree truck pedestals helped break up the table and add some visual interest.  And I always love these balloon wreaths–they are such an easy way to make use of party colors and can be reused as decor in the birthday boy’s room.

FAVORS
The treat bags were filled with little themed goodies–a crocodile lollipop, spy glass, crocodile clapper, eye patch and some gold dubloons. I went a little feather crazy, anything that I thought would look decent with a feather got one hot glued on it. The printable tags (and all other printable items) are available in our shop.