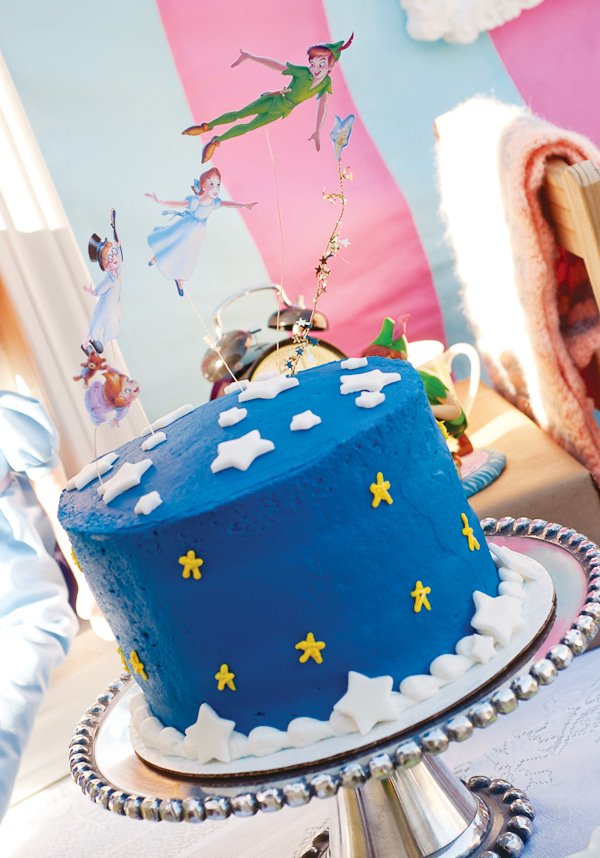 “All it took was faith and trust and a little pixie dust” for Kenna O’Brien of Miss Party Mom to dream up this AMAZING Peter Pan Party for her son’s 4th birthday! Visit the lost boys pub, Skull Rock, the Nursery inspired dessert table and all the magic of Never Neverland right in her backyard! For more Peter Pan inspired party ideas go here and here! 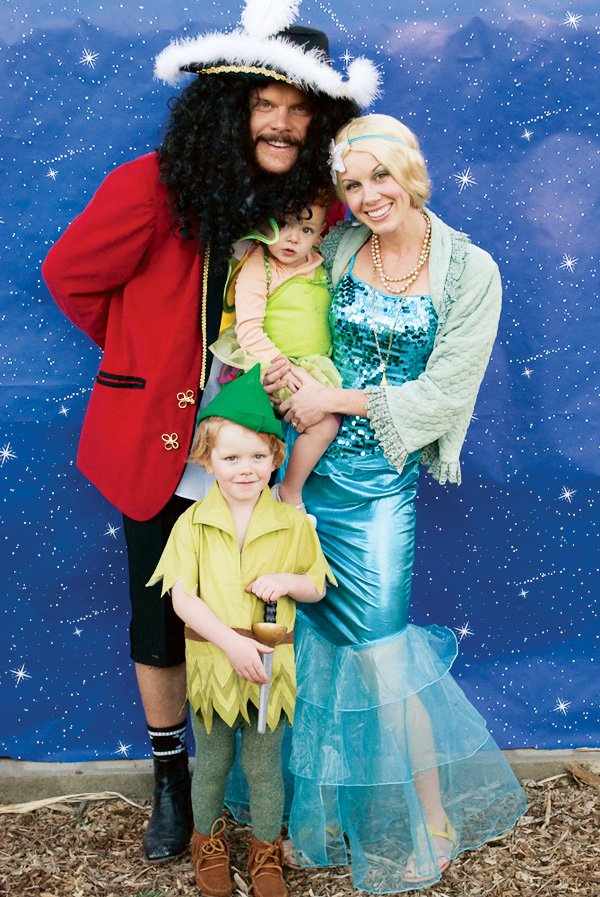 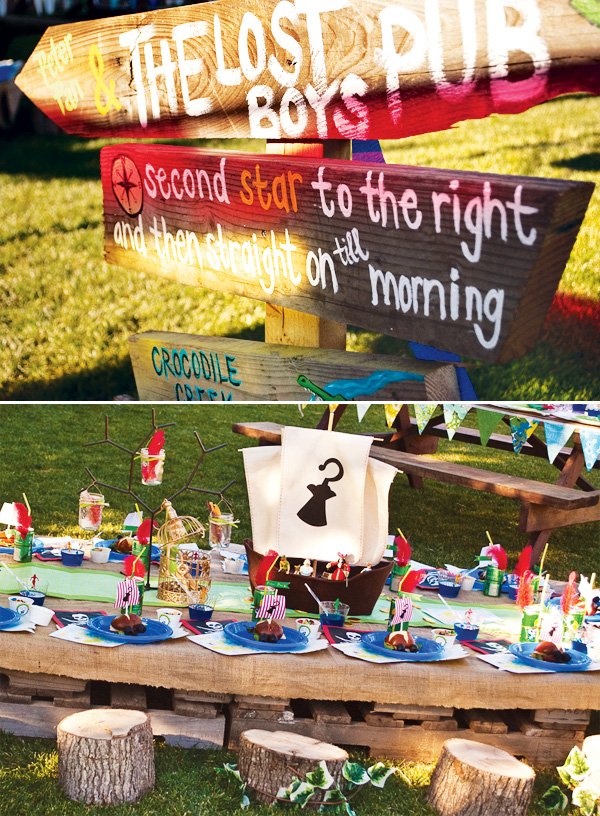 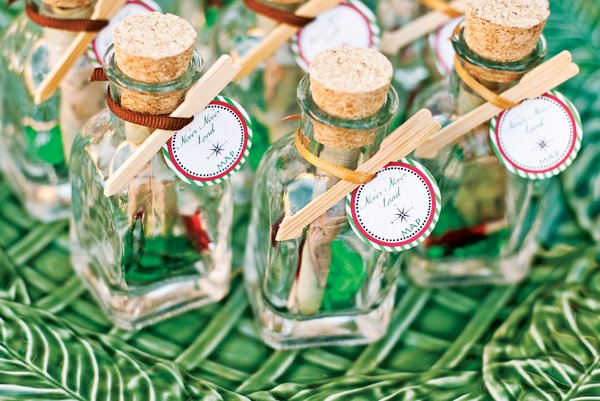 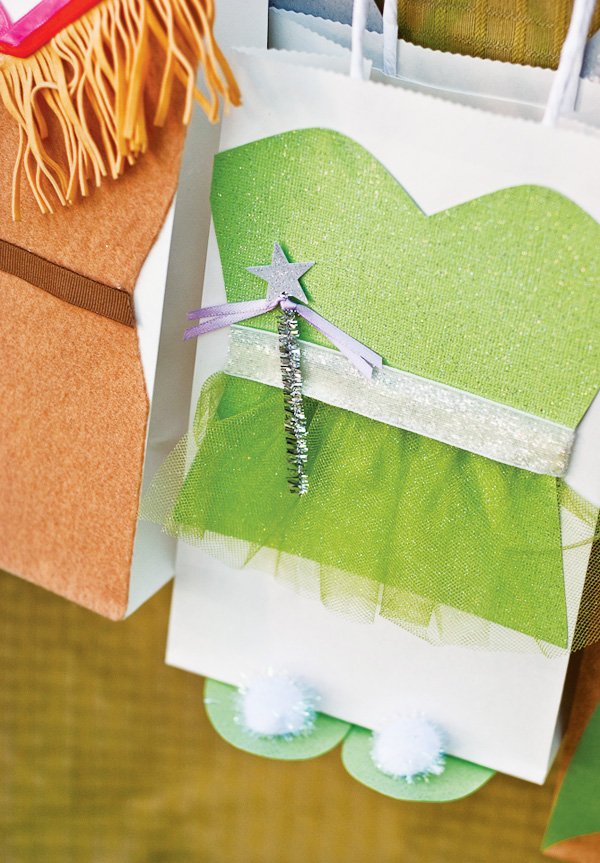 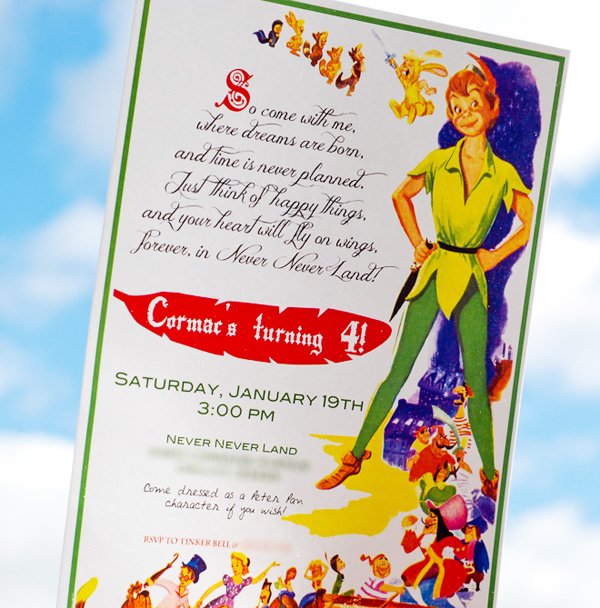 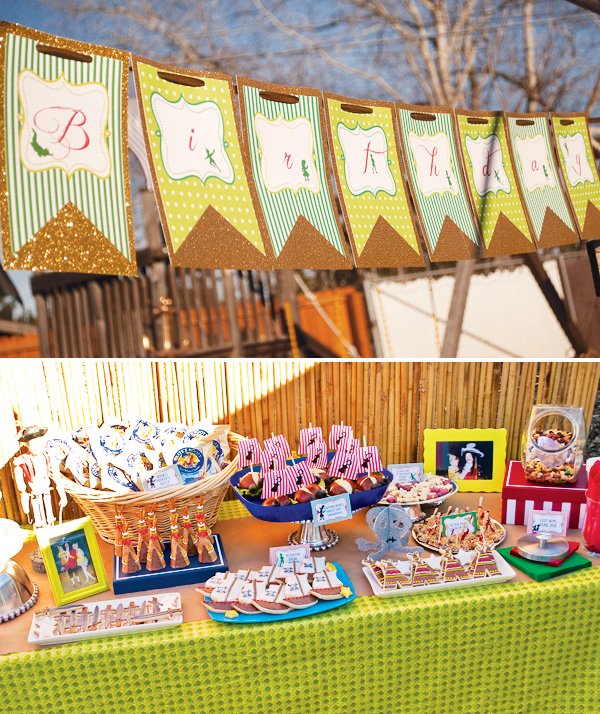 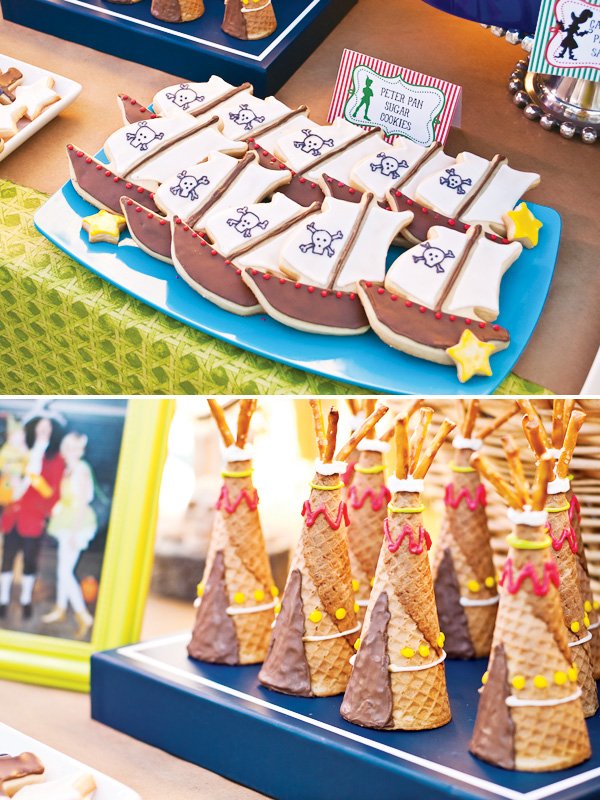 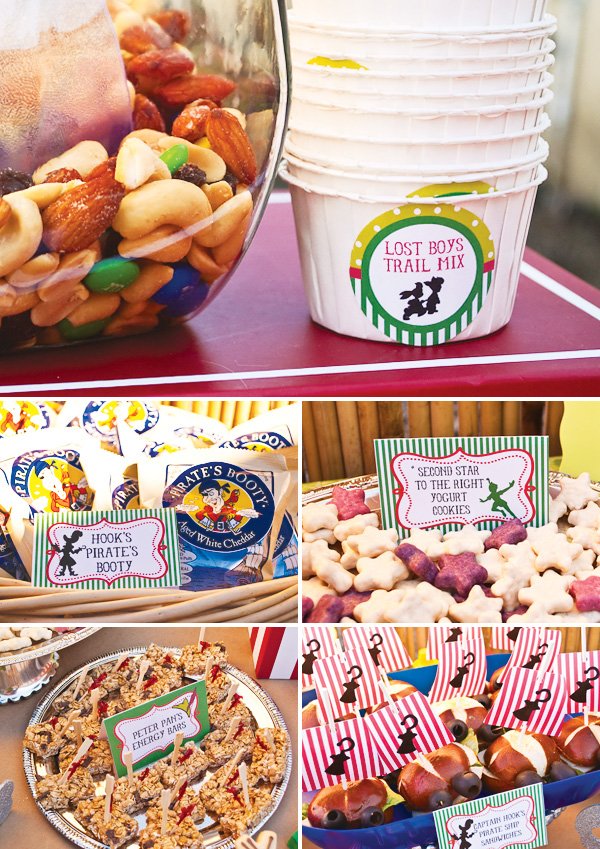 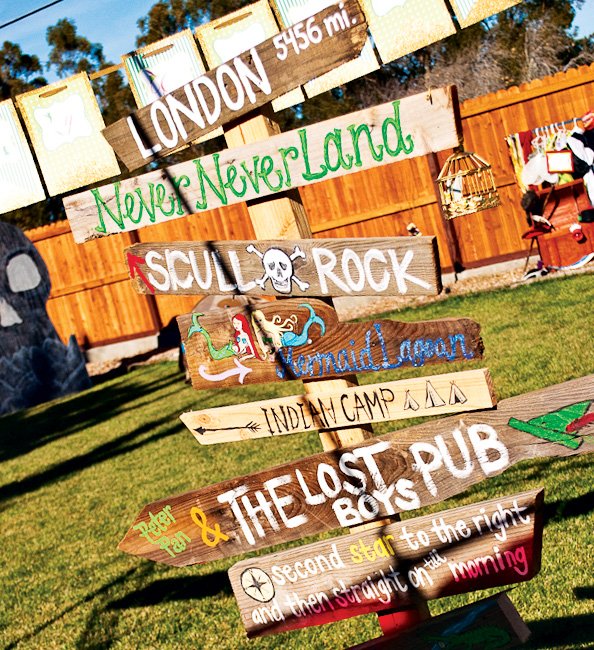 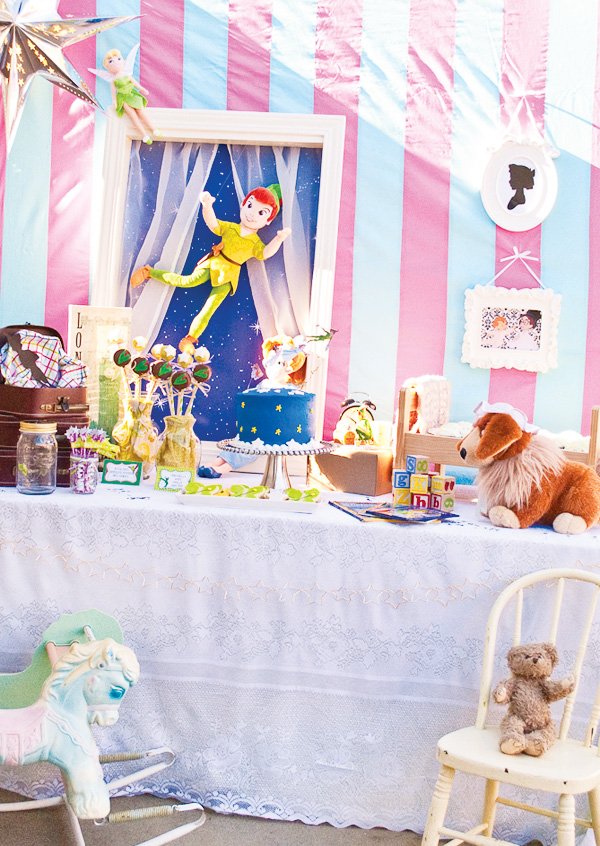 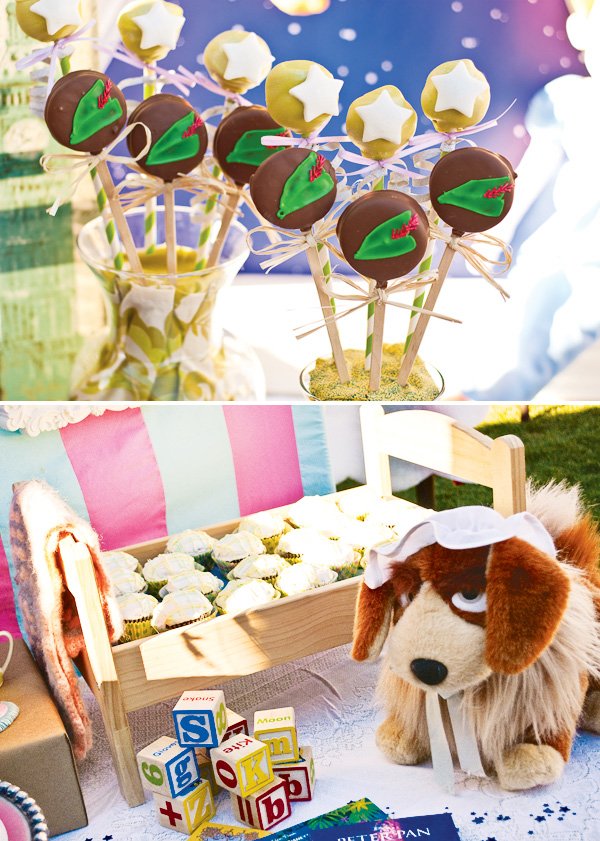 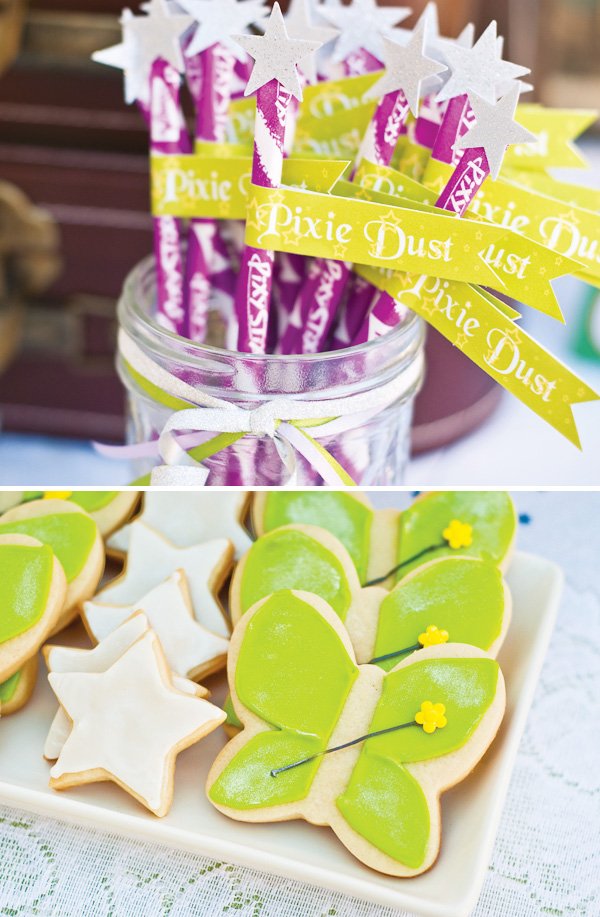 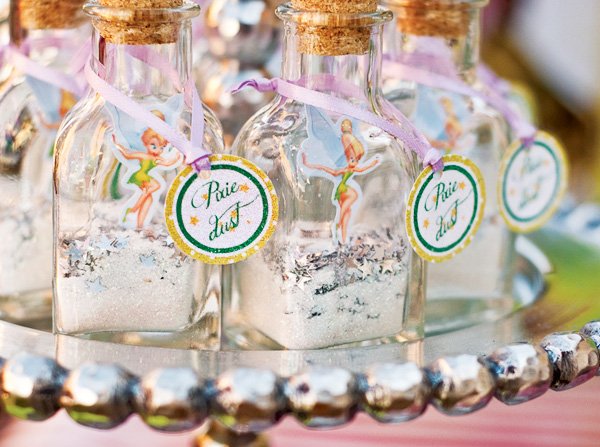 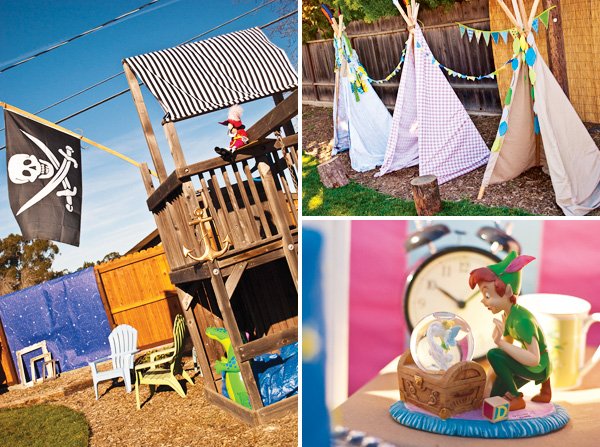 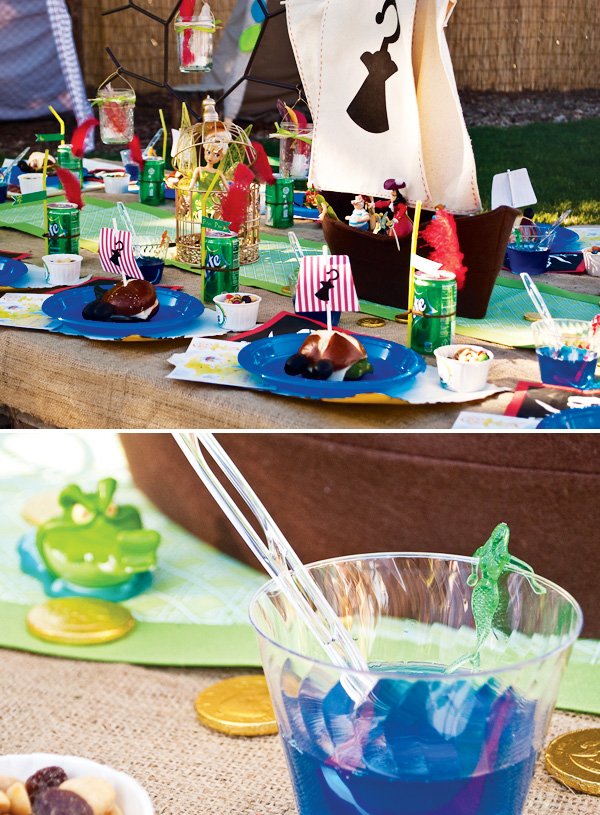 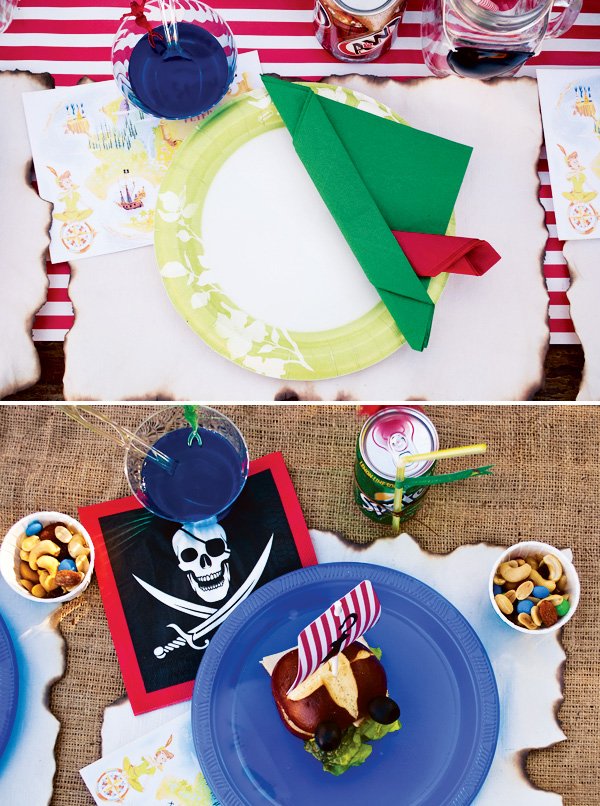 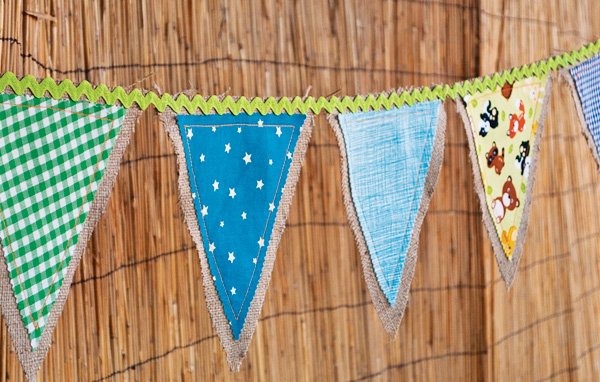 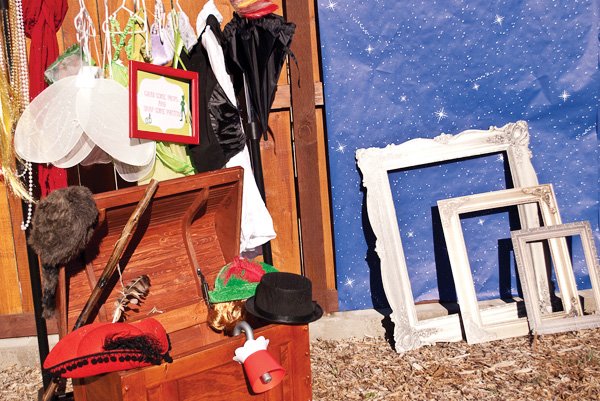 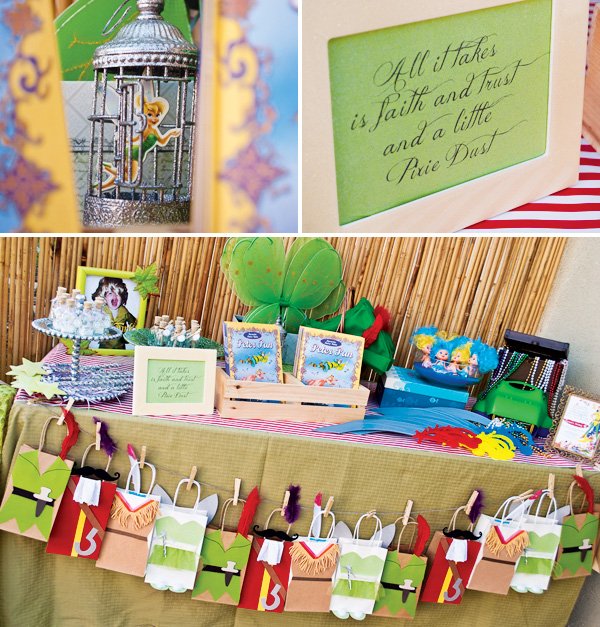 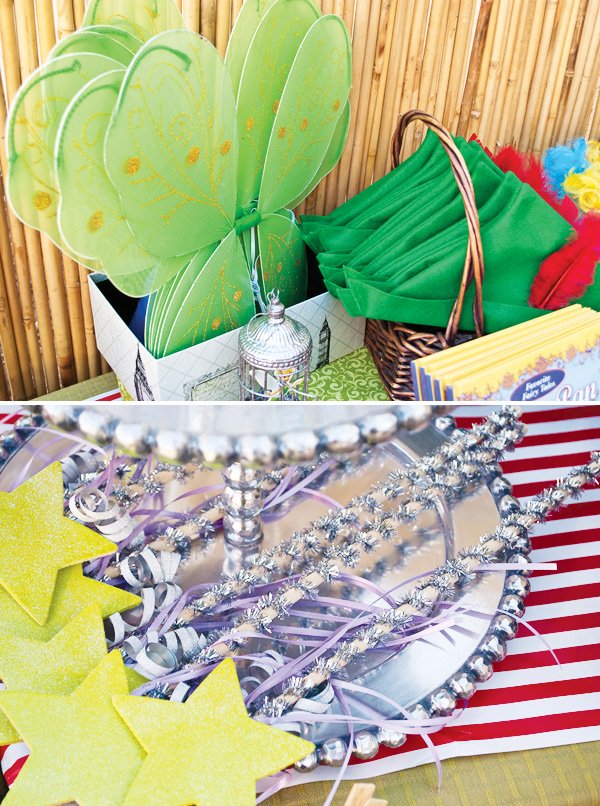 “I threw this party for my son after a year of him talking about his “Peter Pan 4th Birthday Party” (he’s definitely the son of a party planner!). He pitched me a lot of ideas, including the cake with flying characters! I love how much he is in to Peter Pan so I really wanted to try and turn our backyard in to a Never Land the best I could. We had a wood cut Skull Rock, turned our play structure in to Captain Hook’s ship, had a water table as our Mermaid Lagoon, an official tee pee Indian Camp, a tarped out Crocodile Creek (with a blow up croc!) and improvised with “Peter Pan and the Lost Boy’s Pub” (the kids eating area). I hand made my kids costumes (Peter Pan and Tinkerbell), and my son loved yielding his sword!

Some of my favorite decorations were the mini favor bottles, Pixie Dust for the girls and a Never Land Treasure Map for the boys…the kids really loved them and they were the first to go. I hand made all of the character favor bags- which were another favorite.

We had a treasure hunt where kids took the maps from their place settings at their food tables and set out to hunt down X’s, which they then turned in for pirate treasure! We also had a treasure chest pinata full of candy and jewels!

I wanted the entrance in to the backyard to be the Darling Nursery so I designed the dessert table to look like you could be right in their nursery! This was fun. I had a striped backdrop from another party so we hung this up on a PVC frame as the wall and went from there. Our Darling bed had a “cupcake quilt” on it, and vases full of Tinkerbell Wand Cake Pops” and “Peter Pan Oreo Pops”  The table focused on the window scene in Peter Pan and I used my son’s Peter Pan plush dolls for this- which he loved.

The sign pointing to each “land” was a combined effort between my husband- who built it, my friend Hannah who did the illustrations and I did all of the lettering. It cost us nothing as we used scrap wood and already had the paints!

“Peter Pan & The Lost Boys Pub” was a large piece of wood set upon some palettes and draped with burlap. My husband cut up a tree stump and seating for 14 was born!

The cellophane rainbow was a friend’s idea and wasn’t as hard as I imagined it would be to make. We put some batting for clouds at the bottom and our “Welcome to Never Never Land” scroll sign in the middle to welcome everyone in…”

Hi, I’m Alyssa, and I love seeing all the inspiration on HWTM! Aside from my obvious love of design, parties, and blogging, here are a few random things about me: 1.) I’ve done 3 triathlons. 2.) I’m from Miami, Florida but live in San Diego now. 3.) My favorite HWTM printable collections are Baby Bistro and Retro Rainbow.