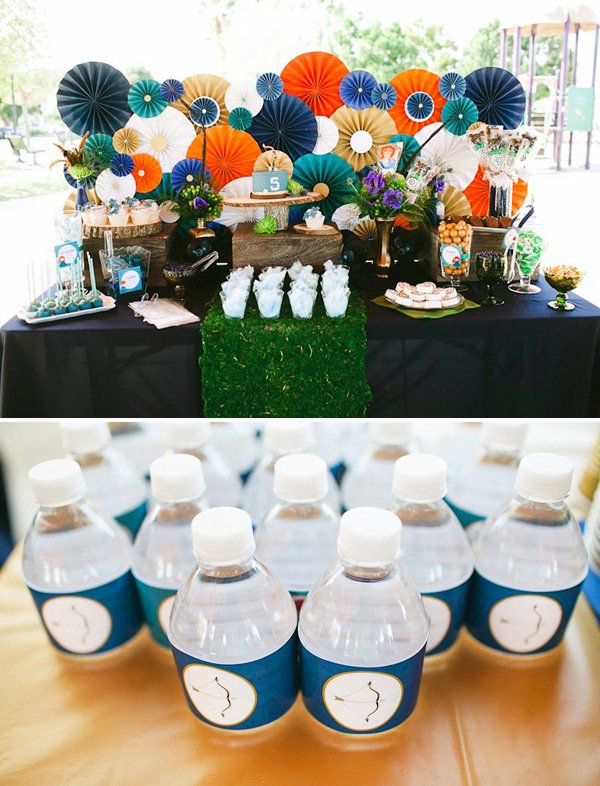 Bullseye! Melissa of Melissa Biador Photography hit the target for her daughter’s 5th birthday! Like the wisps, she led us into the forest for an Enchanting “Brave” Inspired Birthday Party with moss, wooden accents, and Hamish, Hubert and Harris dolls! Fate couldn’t have planned a more magical celebration! 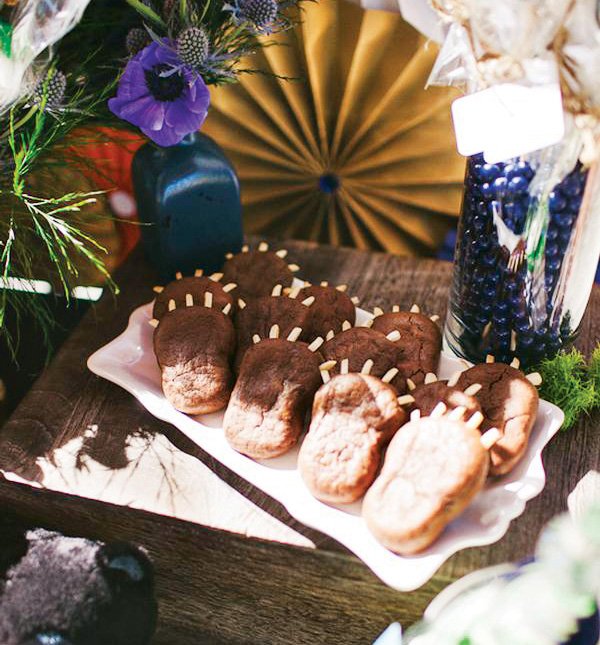 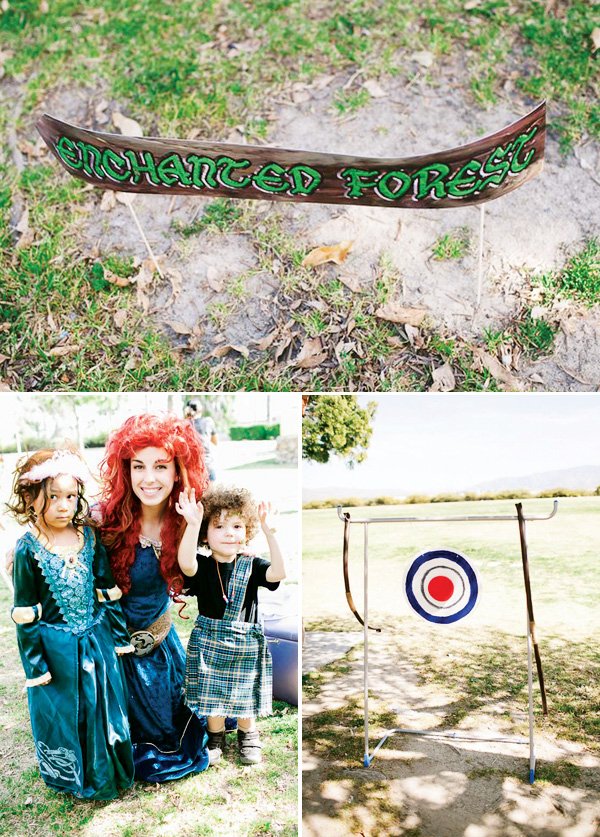 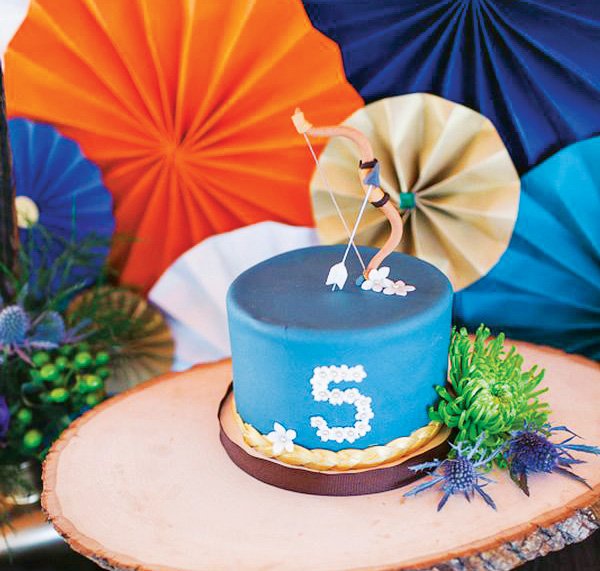 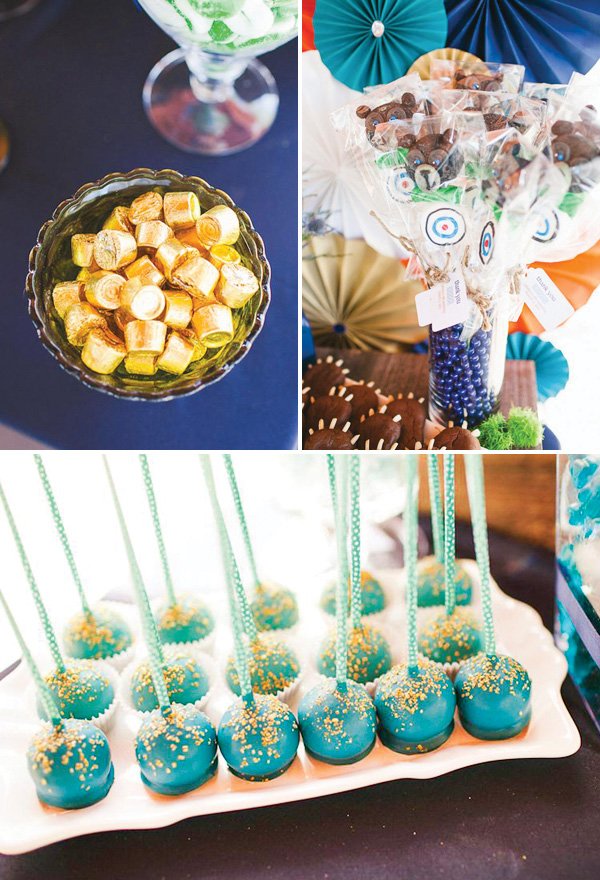 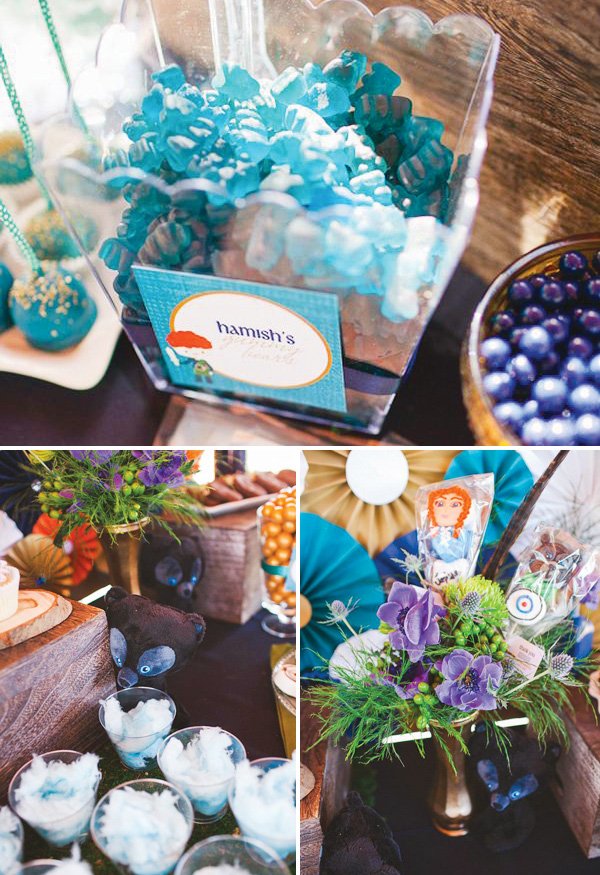 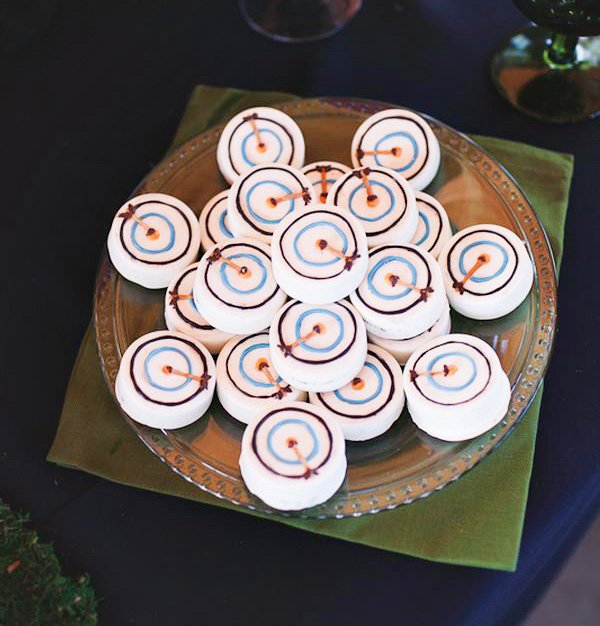 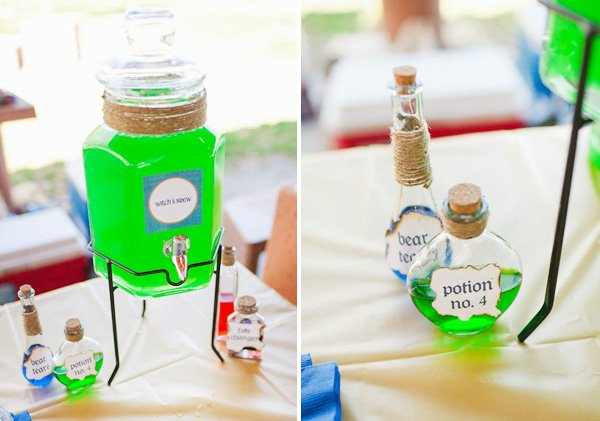 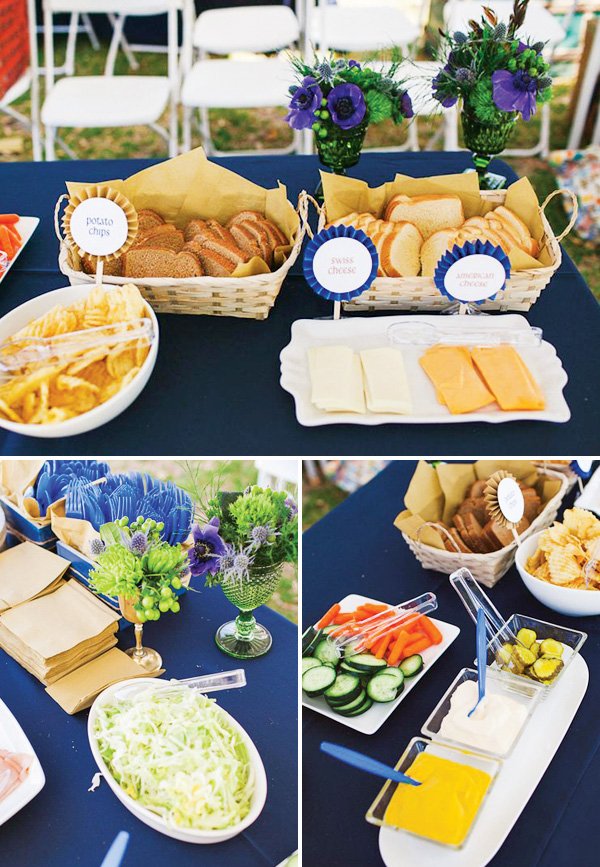 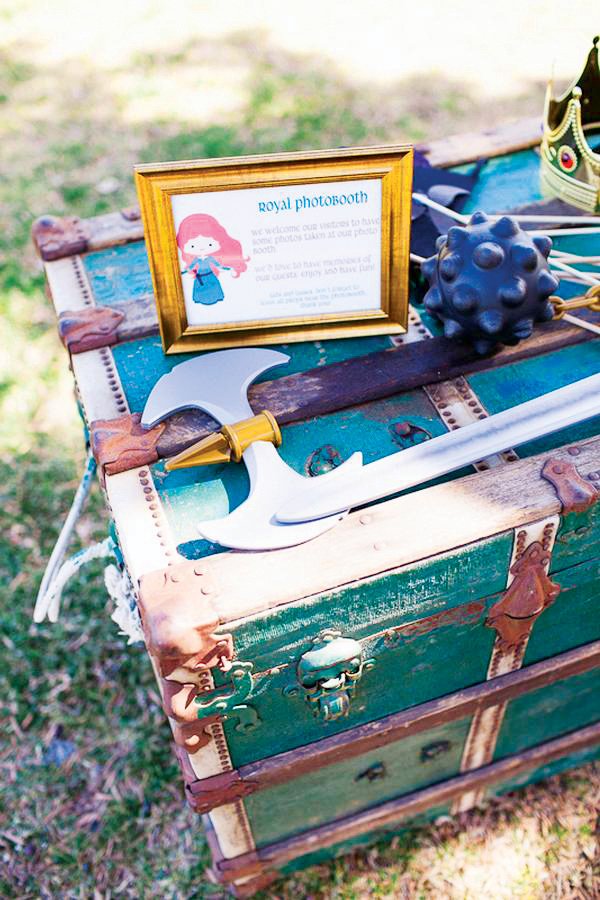 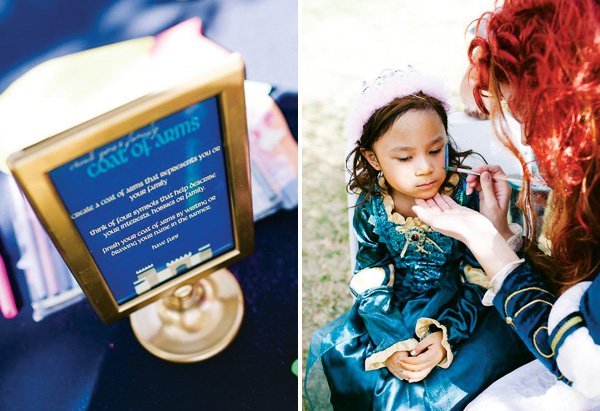 The theme is based on my daughter’s favorite movie, “Brave” by Disney/Pixar. We adored this movie since it was different from the other princess stories and sends a positive message about courage and family unity. As I began planning her party, I decided on gold, teal and navy blue as the main colors.


As for the decorations, I made a lot on my own. To create the flag bunting, I took advantage of Michael’s 5 for $1 scrapbook paper sale and stocked up on paper. After finding a free template of the flag online, I printed it on cardstock and cut it to make a template. From there, I just traced the template onto the scrapbook paper to make the bunting and hole punched the sides. I opted to print the letters and illustration at a nearby FedEx Office for best color results and placed those on the cardstock. The dark blue ribbon holding the bunting was purchased at Wal-Mart for $2.

For the giveaways, I purchased white treat boxes from Oriental Trading Company. I designed the labels on my own and had them printed on cardstock at FedEx Office. The treat boxes had different items for the boys and the girls and the easiest way for me to separate the two were to use 2 different color ribbon. The teal/dark blue were for the boys and orange for the girls. The treatboxes for the boys included an inflatable sword from Oriental Trading Company, blue bubble wands, a “Brave” sticker, “Brave” fruit snacks (purchased from Target) and teddy grahams in a treat bag. The treat boxes for the girls included a small crown comb (to place into their hair), a ring, “Brave” sticker, “Brave” fruit snacks and a teddy grahams in a treat bag.

The refreshment bar included small water bottles and witch’s brew. I also designed and cut the labels for the beverage container. The witch’s brew is just kiwi strawberry flavored Hawaiian Punch. On the beverage container I wrapped twine on the top and placed a label on the front. If you watched the movie, the witch had some viles Merida poured into the cauldron. I bought some small bottles at Michaels to use as viles. I then printed different potion names such as “bear tears” (blue), “potion no. 4” (green), “fate changer” (purple) and a red colored liquid in the last vile. I also wrapped some twine on the bottles of the neck for an added look and burned the corners of the paper to give the labels an aged look. The potions were just water mixed with food coloring.

The project that was very time consuming was the paper rosettes. I placed some on the tents and used as a backdrop for the dessert table. It took me about 2-3 weeks to complete this project… it’s tough but it can be done! I used 12×12 & 8×10 scrapbook paper in a variety of colors. I had some embellishment jewels to add a little more detail. I just hot glued the fans on cardboard to keep it steady.

The standing frames were purchased from Ikea for $1. They came in white, but I spray painted them gold. I also had old soda bottles and vases that I bought from the dollar store that I also spray-painted.


Since it was lunchtime, we had a build your own sandwich bar which included white & buttermilk bread, ham, turkey, swiss and american cheese, shredded lettuce, mustard, mayo, pickles and potato chips. For a lighter snack I also included sliced zucchini and carrots. We also put some floral arrangements with the food items for added decoration. Small baskets were used to hold the bread and they were purchased from the Dollar Tree.
The dessert table was a hit with the guests! My mom (Fely’s Sweet Pops) made red velvet cake pops in teal with gold edible sprinkles, the target chocolate covered Oreos and brownie bear claws. The candies we served were cotton candy taffy, blue sixlets, gold gumballs, apple gummy rings from Candy Pros and blueberry gummy bears & Rolos, which were purchased at Party City.

We also served blueberry cotton candy as Will-O wisp and they were purchased from Dolly’s Cotton Candy. The Merida and bear marshmallow pops were from the talented Alejandra of The Marshmallow Studio. The yummy cupcakes were from Stevi of Hey There Cupcake! I ordered vanilla with strawberry buttercream cupcakes and Janissa’s cake was chocolate with salted caramel buttercream.

The decorative pieces on the dessert table were gorgeous! My dear friend Desiree of Penny Blooms made the floral arrangements in different vases (which I spray painted gold or navy blue). My other friend Elisa of Events by Elisa provided the wooden cake stands. We also put a moss table runner in the center of the table since Merida runs through the woods. I also purchased the Hamish, Harris and Hubert bears from the Disney Store and put them on the table since they enjoyed eating desserts in the movie.


We had 2 games and one activity table for the kids. The first one was the archery game, which was so much fun for kids, and adults alike! My husband made a small and large bow out of PVC pipes and nylon string. The arrows were made out of wooden rods and the tips were made out of eraser tops you can find at the office supply store. The material is inexpensive and we spent about $15 to build them. We purchased the PVC rods & wooden rods from Lowe’s.

We also had a beanbag toss game and an activity table. On the activity table the kids could make their Coat of Arms representing their family or make a bear claw necklace.
An open air photo booth was also available for the guests. Because I knew I would be so busy running around I wouldn’t be able to take photos of everyone. I love photo booths because it allows the guests to have fun while taking photos. The trunk was provided by Pow Wow Vintage and I placed some props on it. The props included a royal crown, some mustaches and a Brave toy set we purchased from the Disney Store.

As a surprise to Janissa, we had Princess Merida from The Royal Entertainers come to the party. She crowned Janissa and did some face painting on the kids as well as reading a story. What I loved was she actually spoke in an Irish accent! I was so amazed with the attention to detail (costume, wigs and the activities) and the kids had such an amazing time with her.