If you’re a glitz and glam kind of gal, then Melissa’s 30th birthday party is going to have you daydreaming for classy martinis, sweet pearls and romantic perfume bottles! Her Fabulous Chanel & Sex and the City Dessert Table by Kiss Me Kate has all of the delicacies of sweet luxury… pink cupcakes, ruffled fondant flower toppers, jewelry boxes and the famous new york skyline! 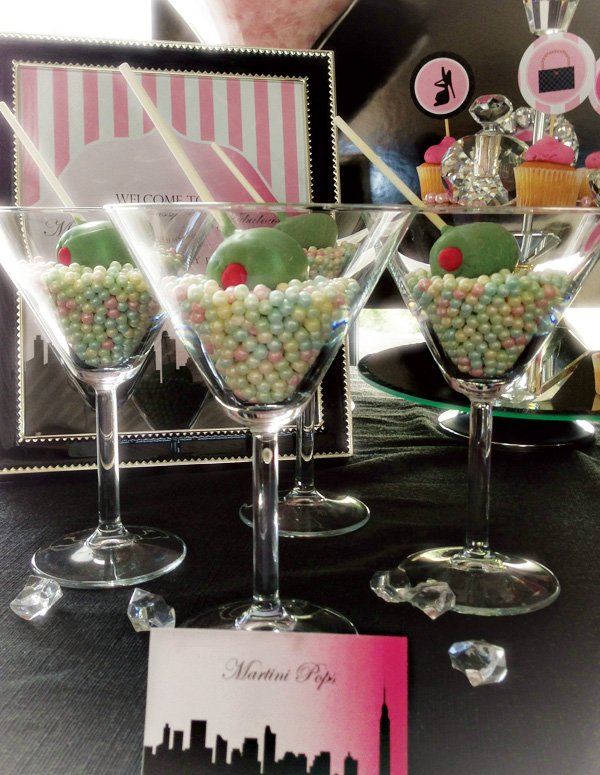 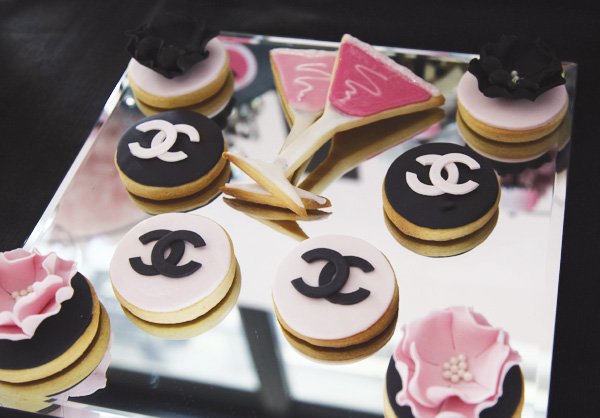 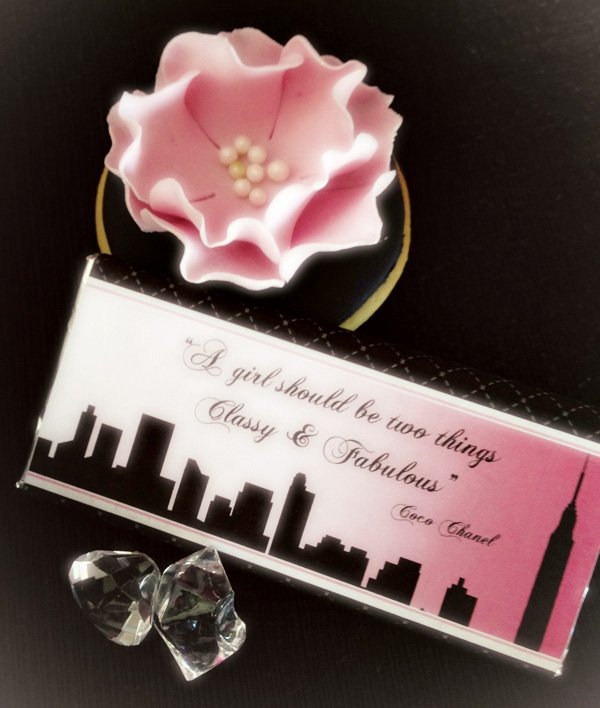 PARTY DETAILS, as told by Kate…

Our client Melissa has two loves – Chanel & Sex and The City.

When we received word from Melissa that she wanted a Sex and The City/Chanel themed party for her 30th Birthday, Yolanda and I were truly excited. Kiss Me Kate had done a Chanel Inspired event before, but adding a Sex and The City Theme into the event was going to add some spunk and wow!

Initially Yolanda and I based our inspiration board on Chanel and decided to incorporate elements of Sex and the City, but as we progressed through the styling stages and our inspiration for desserts, the tables quickly turned and we got lost in the Sex and The City Theme, which then incorporated “Chanel!”

INVITATION & PRINTABLES
Melissa’s friend designed her invitations, which were a black wardrobe that opened up to reveal the event information. The wardrobe had a Chanel handbag hanging from the door handle with pink and white stripes inside when you opened up the invite. Melissa requested that the printables tie in with her invitation, so starting our colour palette was black, white and a soft pink. All Kiss Me Kate custom printables are handed to the clever girls at Anders Ruff Custom Designs, and Adria was given the task to design the printables based on this brief. What a beautiful job she did!

DESSERT TABLE
The dessert table was designed to incorporate the quintessential elements synonymous with Sex And The City – martini glasses, city skyline backdrop, handbags, shoes, hat boxes, designer jewellery etc. Yolanda, our mastermind stylist, went to work creating the foundations of the styling whilst I started my research on how to incorporate Chanel with city skylines.

For obvious reasons, the two themes worked hand in hand. The desserts consisted of chocolate olive cake pops in martini glasses, Sex and The City, Chanel Inspired and skyline cupcakes and cookies. Other desserts included macarons, personalised chocolate bars and candy that tied in with our colour palette. The cake was a two tier chocolate mud cake which was decorated with the city skyline and sugar flowers added to incorporate an element of “Chanel.”

Our clever client had a life size Sex and The City poster created which included her as one of the Sex and The City girls! A very fun and clever touch to the event. We all know the TV show Sex and The City is fun! Every element from styling, to baking and decorating this theme was fun too. As was Melissa’s party I believe!