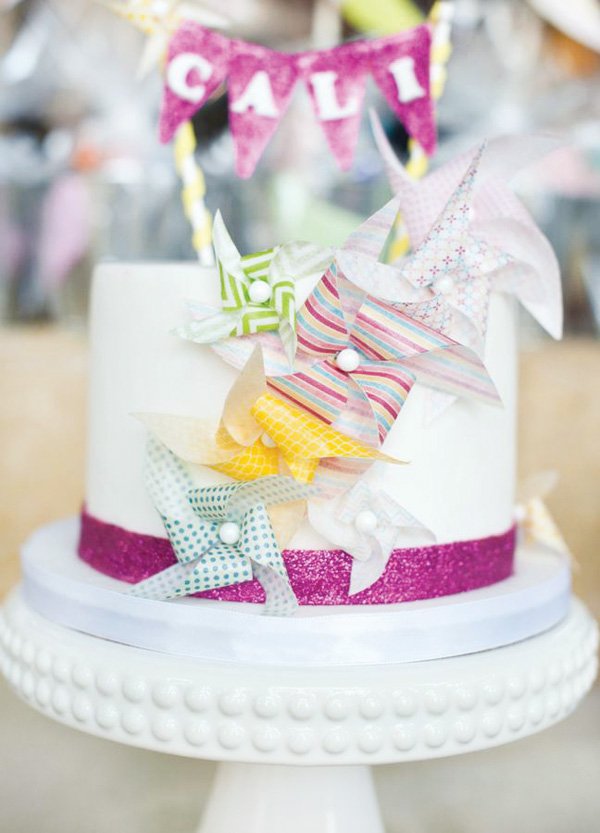 With her young daughters only 23 months apart, the incredibly talented Kris of kCreative (a.k.a. cake pop designer extraordinaire) decided to go all out with a joint birthday celebration! This Colorful Pinwheel Party is full of bright colors, fun patterns, and pinwheels galore… check out the fabulous pinwheel garland embellishment on the front of the dessert table – not to mention the super cute pinwheel shaped cookies! 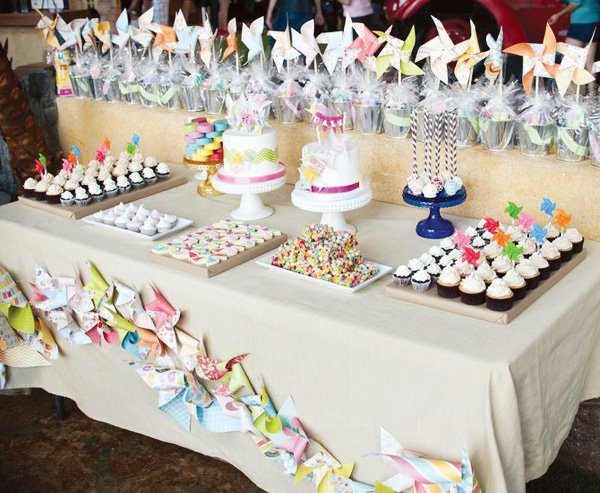 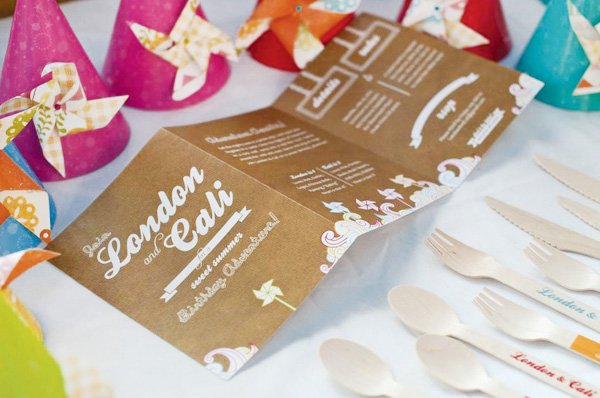 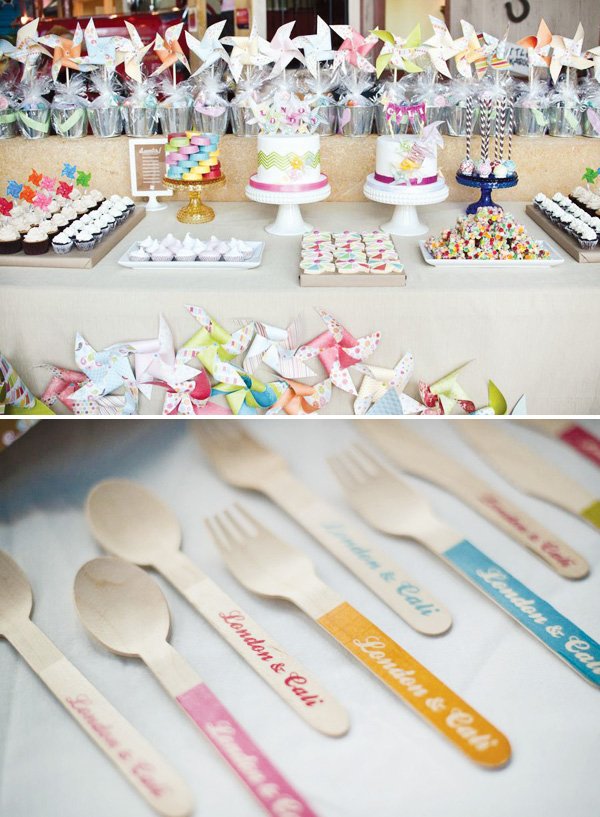 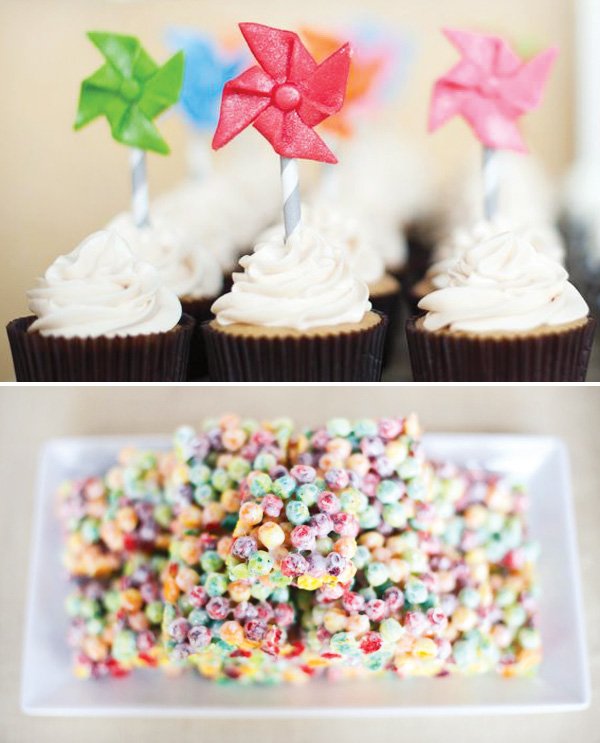 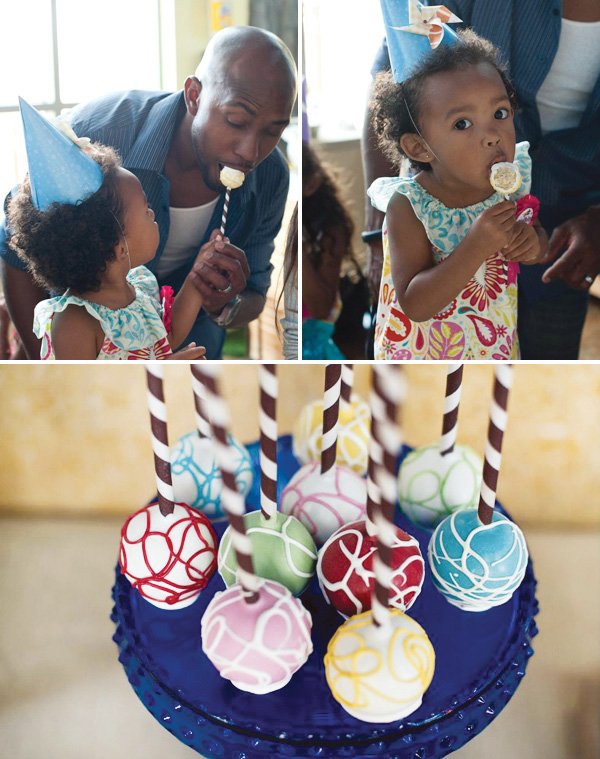 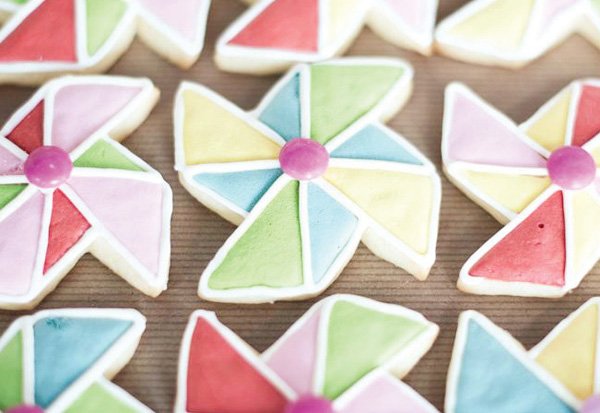 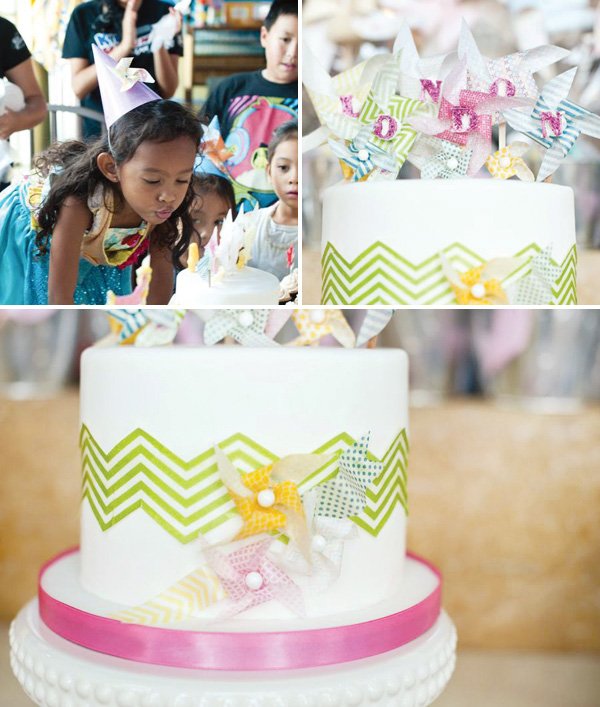 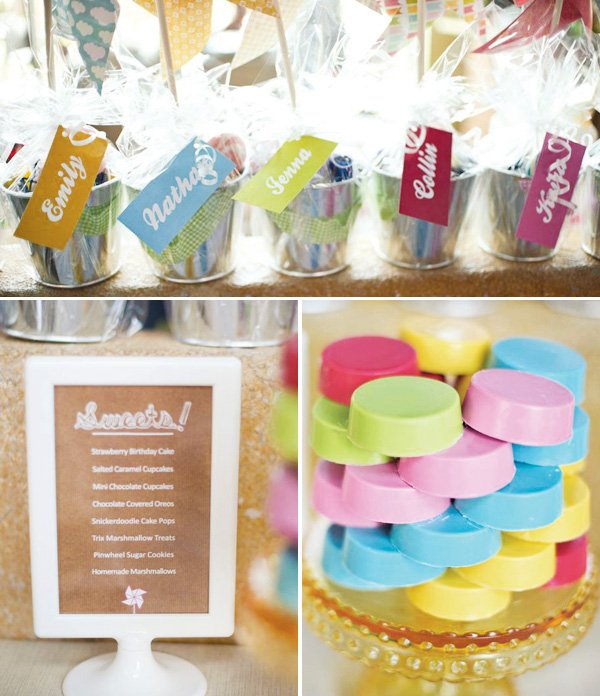 PARTY DETAILS, as told by Kris…

London and Cali are twenty-three months apart. This year we decided to throw a joint birthday party for them in a local indoor adventure play area called Kid Ventures. I wanted to do a fun summer theme, and decided on pinwheels since my daughters love them and there were endless DIY ideas that were brewing in my mind. I ordered coordinating dresses for the girls from Charming Necessities and the colors on these dresses dictated our color palette for the party.

INVITATIONS & PAPER GOODS
I’m typically known for the cake pops I create, but what many may not know is I am also a seasoned graphic designer. I’m a big believer in that the invitations always set the initial tone for the party. I designed a white-print on craft paper tri-fold invitation with illustrated pinwheels and other illustrated details. I also made table signs to match. I custom-made wooden cutlery with the girls’ names in our color palette. I also made some very inexpensive DIY pinwheels (that actually spin) out of double-sided scrapbook paper, long bamboo chop sticks, floral wire, eyelets, beads and hot glue.

DESSERT TABLE
My biggest challenge was a very welcoming one. I couldn’t have a backdrop because the walls in the venue’s dining area is completely made of glass, so our dessert table had to be placed opposite of the glass wall. I enjoyed having to brainstorm other ways of presenting a dessert table without the use of a back drop and the solution I had was utilizing the empty space on the table cloth and using the party favors as part of the decor. The pinwheel tablecloth was made with the same set of scrapbook paper as the DIY pinwheels in the party favor tins. The same scrapbook paper was also used for the small pinwheels on the party hats.

The dessert table consisted of my girls’ most favorite sweets. I made salted caramel cupcakes and chocolate cupcakes — their two favorite flavors, topped with fondant pinwheels made by The Sugar Shack. I also made a chocolate-covered Oreo tower, cake pops, Trix cereal marshmallow treats and colorful pinwheel sugar cookies. I used paper straws from Green Party Goods in lieu of sticks for my cake pops and they were also used for the pinwheel cupcake toppers. Pam of Cake Ball Love made some amazing handmade marshmallows and Stevi of Hey There, Cupcake! made the two most fabulous pinwheel-inspired cakes. Hobnail cake stands from The Sugar Rush Shop added just the right touch to the table and Adot Photo was able to capture our girls’ first joint birthday party.