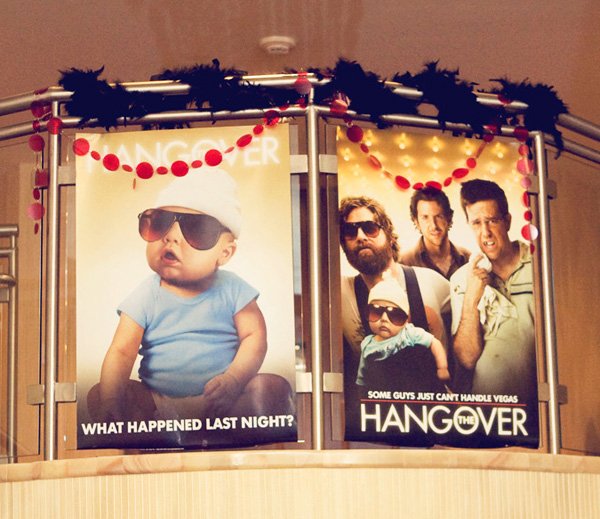 In continuing with Part 1 of our “Wedding Hangover Party” from yesterday, I’m just going to jump right into Part 2 here – because there’s lots to cover! This will recap the party decor and photo props (Part 1 featured the drinks/dessert table, accommodations, and overall concept). Here goes...

THE INSPIRATION for the party decor came from the hilarious scenarios and quotes from the movie itself, of course… but I wanted to be sure to incorporate the tiger, the chicken, Stu’s missing tooth, the hospital scene, and the casino/Vegas vibe in particular… and then of course tie in the anniversary/wedding element too! 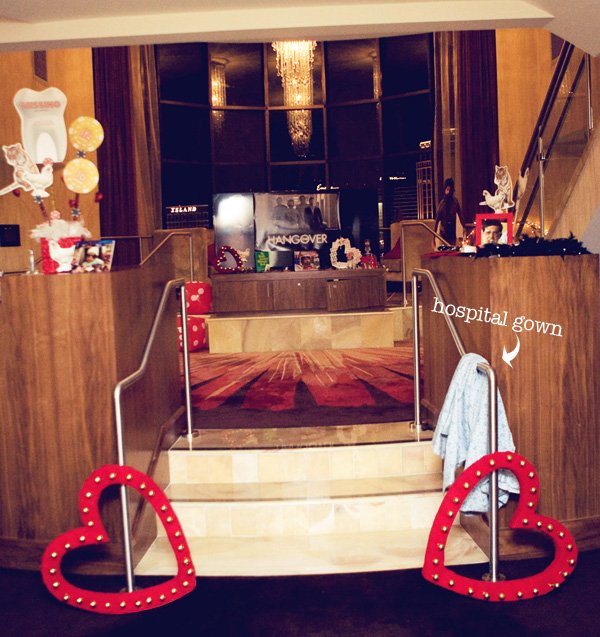 The image above is shot from the “front door” of the suite’s lower level. The “lighted hearts” and hospital gown are props for guests to use in photos…more on those later!

The pepper shaker below (sitting on a Las Vegas Hotel Collage Coaster) references Alan’s “Tigers love pepper. They hate cinnamon.” quote from the scene when the guys are serving the “floorie steak” *wink* to the tiger. 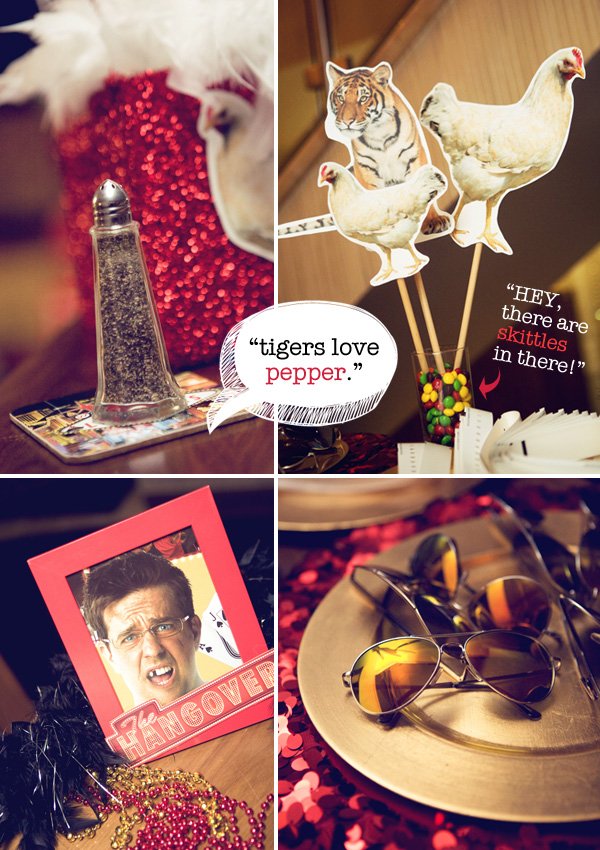 I purchased stock photos of a tiger and a chicken from istockphoto.com, printed them out at various sizes, and attached them to wooden dowels. These were used throughout the centerpieces and stuck into vases filled with Skittles (which also tied into a movie quote). Here’s a picture of one of the bigger centerpieces: 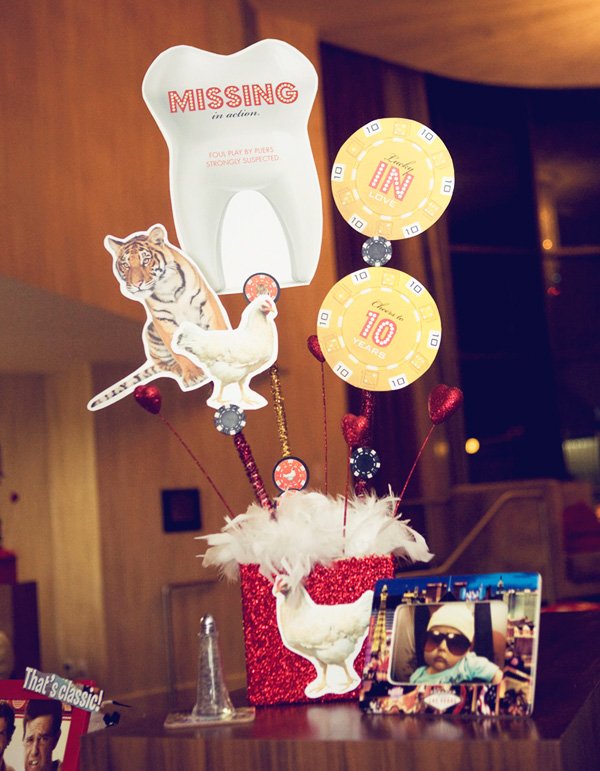 In addition to the tiger & chicken graphics, the centerpieces also featured the missing tooth prints from the dessert table (see Part 1) & giant paper casino chips that read “Cheers to 10 Years” and “Lucky in Love“. The wooden dowels were embellished with sparkly pipe cleaners.

Real poker chips were also used to decorate the wooden dowels. I purchased the poker chips at Target, and they were surprisingly heavy/nice-quality for the price – about $8/set! I also used them to line/hide the rim of some of the vases, which were actually inexpensive wooden containers covered in sparkly fabric. For the vase fillers, I used red acrylic ice and lengths of feather boa. 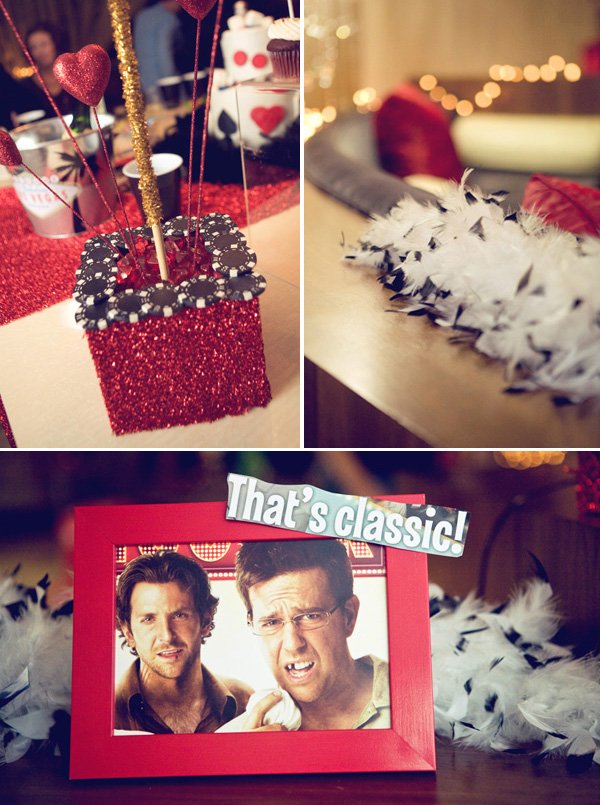 Wall calendars are one of my favorite ways to get cheap “prints” to frame for parties. The framed prints featured here are all cut from a Hangover movie calendar. Some were displayed in frames from IKEA and others in novelty Vegas frames that I purchased here. 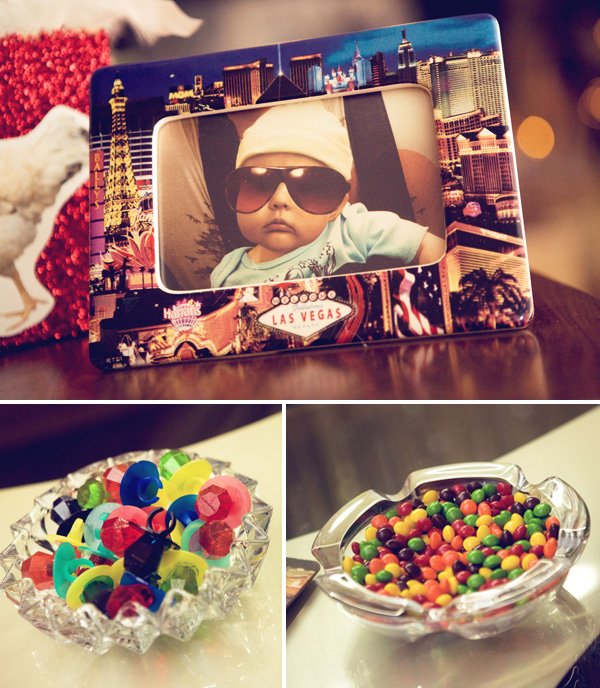 Pictured above: Carlos/Tyler (a.k.a. the “Hangover baby”), ring pops to tie in the wedding element, and Skittles… for Alan’s Skittles-filled man purse satchel.

And speaking of the baby from the movie… that brings me to my favorite element of the party… our daughter’s cameo as “Carlos”! (or “Carlita” as we called her). Our good friend dressed up as “Alan”, complete with the baby carrier for Macy! 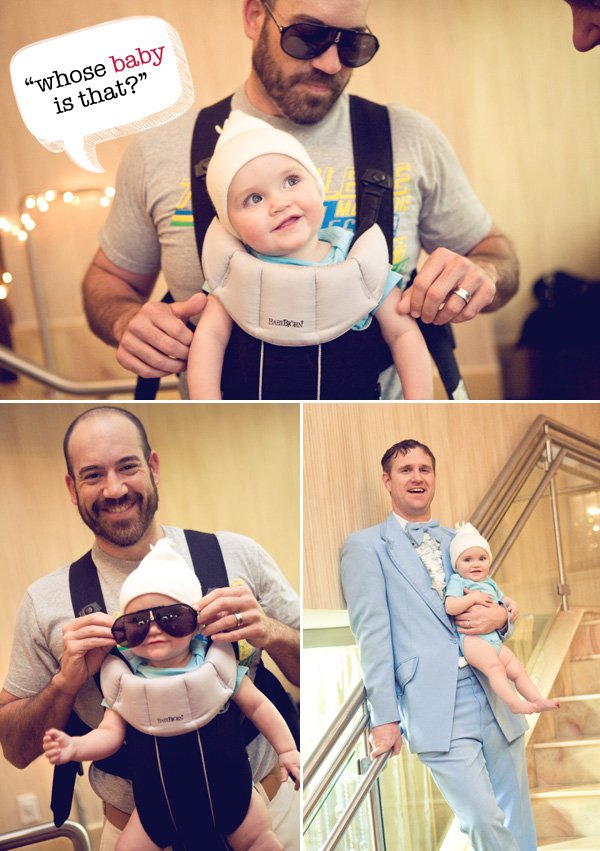 Don’t worry… Macy made quite the early exit from the party. Luckily my own mom was conveniently staying just a few rooms down the hall. Gotta love Grandma! =)

Next up, another favorite element… the Talking Hangover Bobbleheads! Each doll quotes different lines from the movie, such as “{singing}…And we’re the three best friends that anybody could have…” 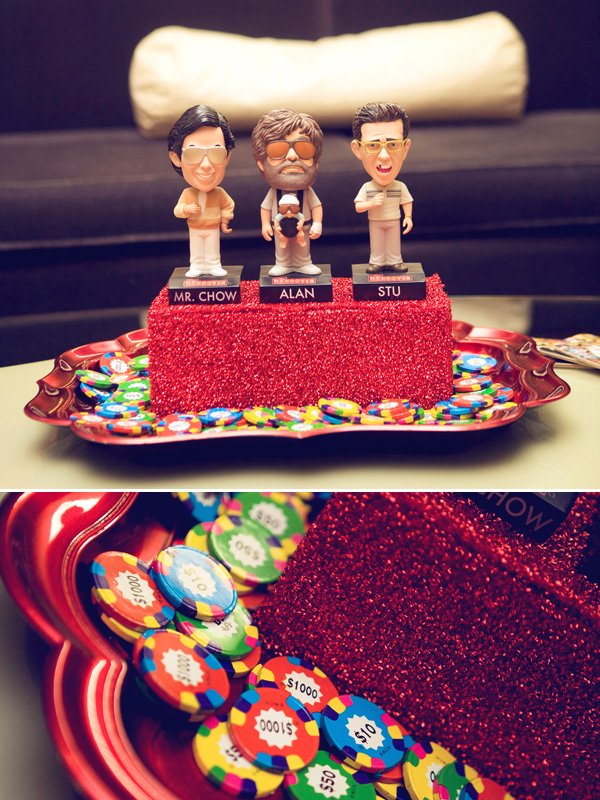 Three of the Bobbleheads served as the centerpiece for the coffee table. They’re elevated on a wrapped wooden box, placed on a cool metallic red tray I found at Target for $14, and surrounded by chocolate poker chips from Sweets Indeed.

The 4th Bobblehead (another Alan doll) was displayed near the TV, along with mardi gras beads just like Alan wakes up wearing. I couldn’t resist a play on the hilarious “wolf pack” speech by Alan and set out a toy wolf pack in the same area with a mom/dad/baby to represent our current family. =) 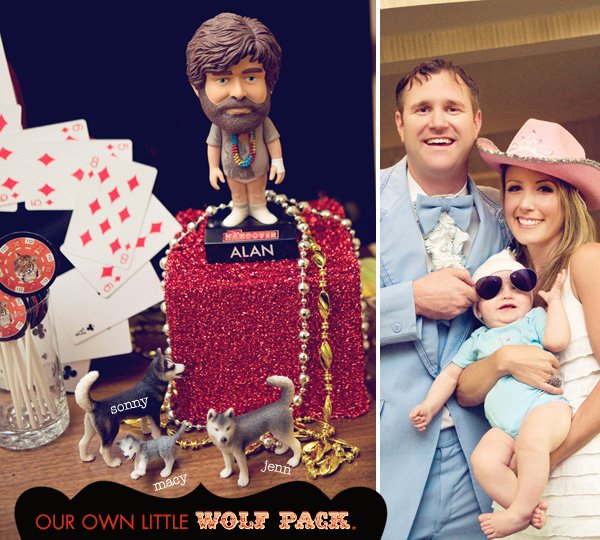 The TV was in the very center of the suite, so I tried to make the most of that space & loaded as many movie references there as possible…(and of course the other side of the huge TV came in quite handy for football during the day!) 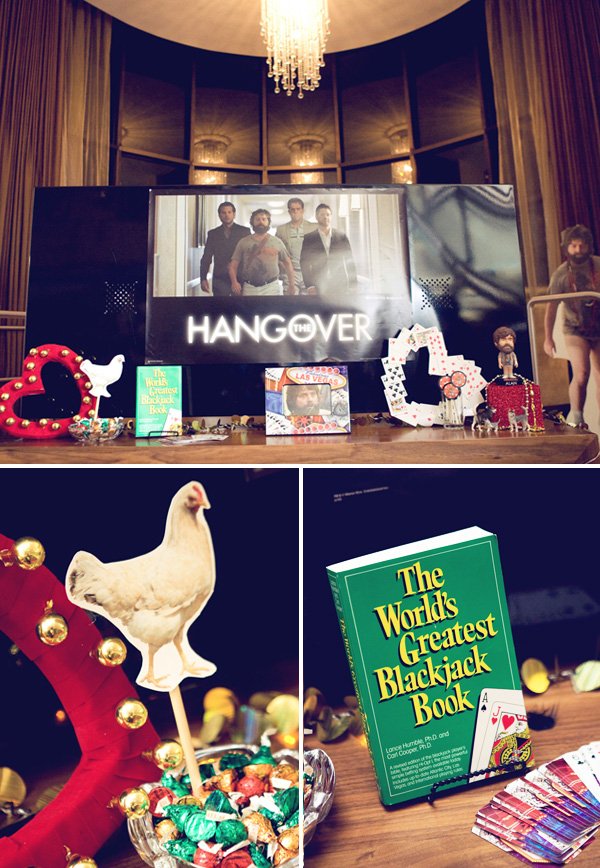 The picture of Alan in the Vegas frame is a still from the police taser scene, and I found the blackjack book referenced in the movie on Amazon. Also pictured above: styrofoam hearts covered in playing cards and velvet ribbon/ornaments (to look like “Vegas sign” lights), and if you look really close you can even see Alan peeking through from the back of the room on the left! But here’s a better view… 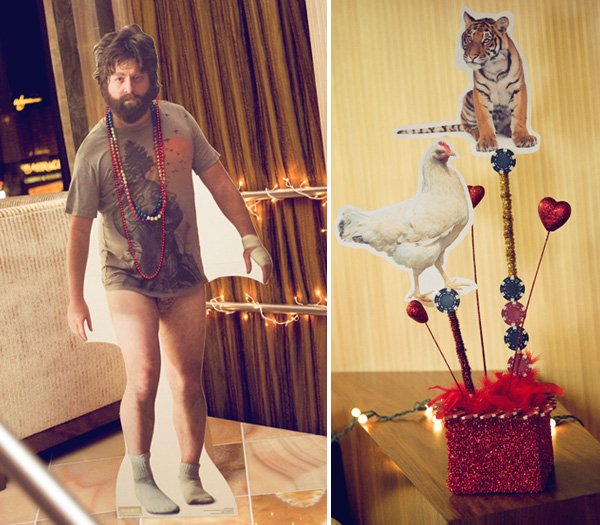 I was so excited to find this {almost life-size} cardboard stand-up of Alan! I feel like need to point out that Alan IS wearing cheetah-print underwear though… it’s a little hard to tell from the picture!

I searched everywhere for stand-ups of the other characters and Mike Tyson too but couldn’t find them. I DID find at least one other useful design though… 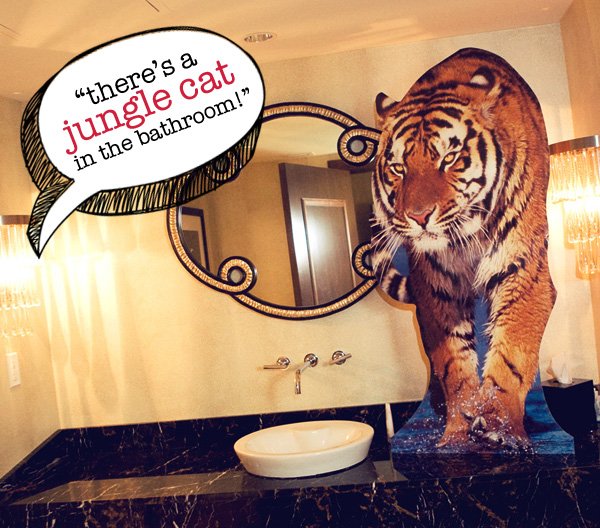 …that’s right – we had to have a tiger in the bathroom! I originally planned to buy a giant stuffed tiger, but the cardboard version was more cost effective and easier to transport. Another thing I thought would be fun here but didn’t have time to figure out was to have recorded tiger growls playing on a loop in the bathroom too. How’s that for setting the mood?!


The stand-ups were also great “props” for guest photos! 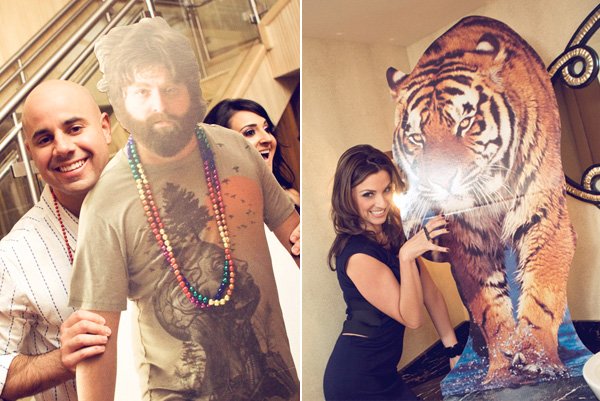 Speaking of photo props… let’s move on to those next, starting with Alan’s aviator sunglasses. I purchased a few different colors/designs of sunglasses on Amazon for $3-$4 each. There was a pair for everyone, so I guess you could call them a party favor too. =) 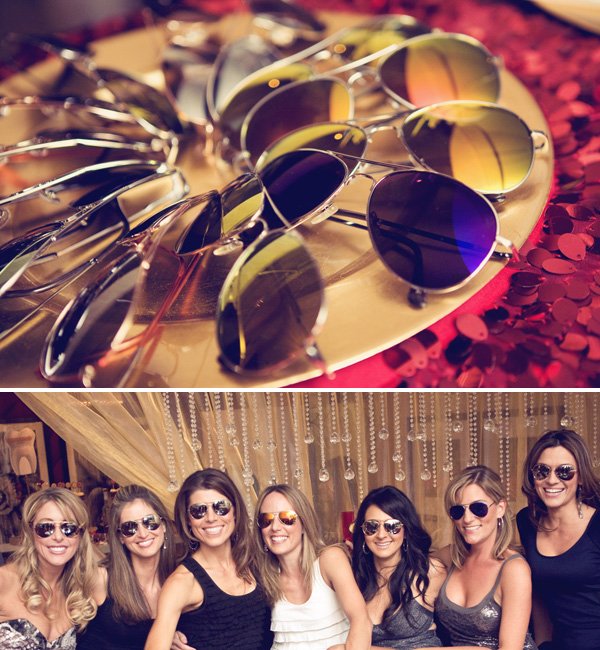 We also had hospital bracelets for everyone to wear, thanks to my nurse practitioner friend – Mimi. She also brought a hospital gown for us to use as a photo prop! 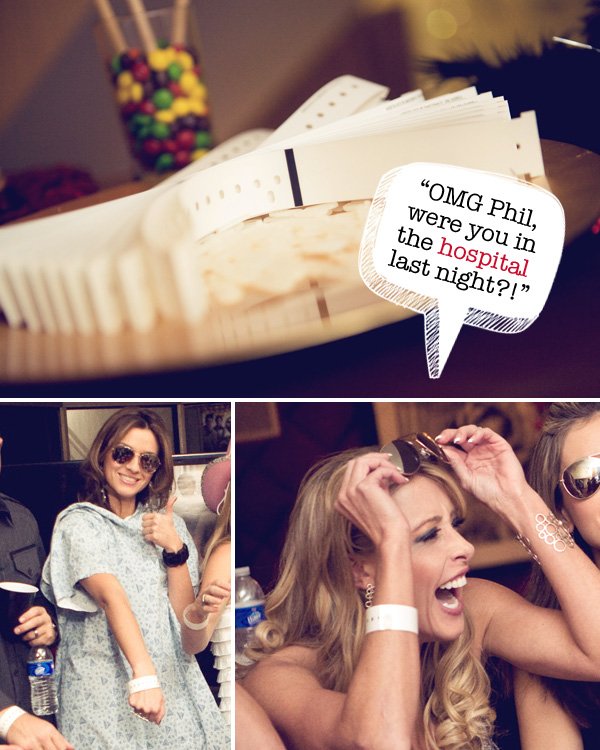 Now, keeping in mind that this is also an anniversary party, I wanted to have some sort of “love” themed photo prop too. I kept envisioning some sort of giant heart that guests could peek their faces through.

At first I was planning to decorate the hearts to be kind of “cheesy wedding” style, but then I noticed a big pack of small gold Christmas ornaments at the store that had wire attached, and realized they could be fashioned in a way to create that “name in lights” effect, which was a perfect tie-in for Vegas! 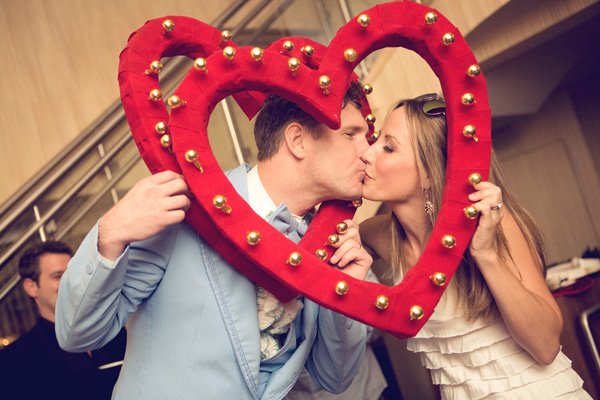 So I had them all nice and pretty before the party (DIY post coming separately), but I didn’t really account for the “passing around” factor at the party, so they got kind of thrashed. Instead of being upset about it, I’m just going to pretend that this was part of the plan and state matter-of-factly that these are now “hungover” hearts that just wanted to fit in with the idea of a thrased hotel room. See how easy that was to justify?! =) 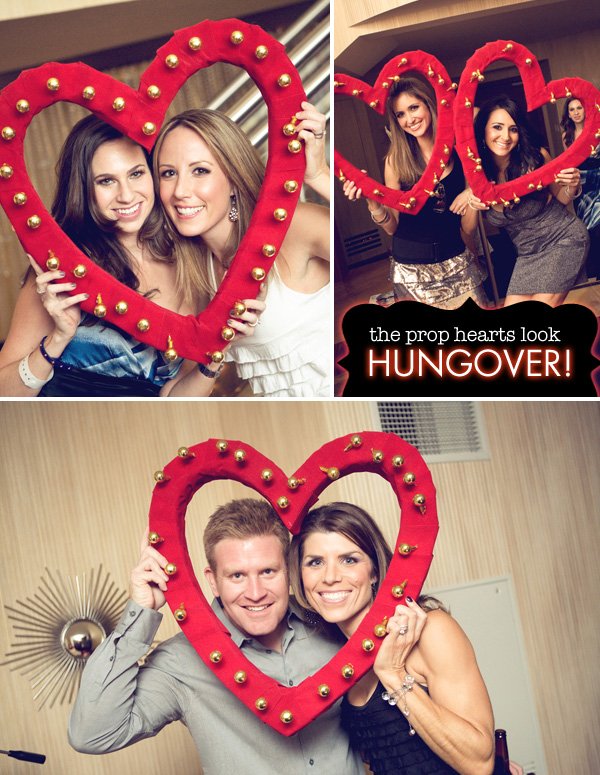 Word to wise if you do this in the future though – hot glue to the ornaments for extra security. The wire felt secure at first, but just couldn’t hold its own with the party guests!

We also had some blow-up dice (purchased at Party City) to use as props and toss around, and of course the suite – with that fabulous window – wasn’t a bad “prop” in itself! 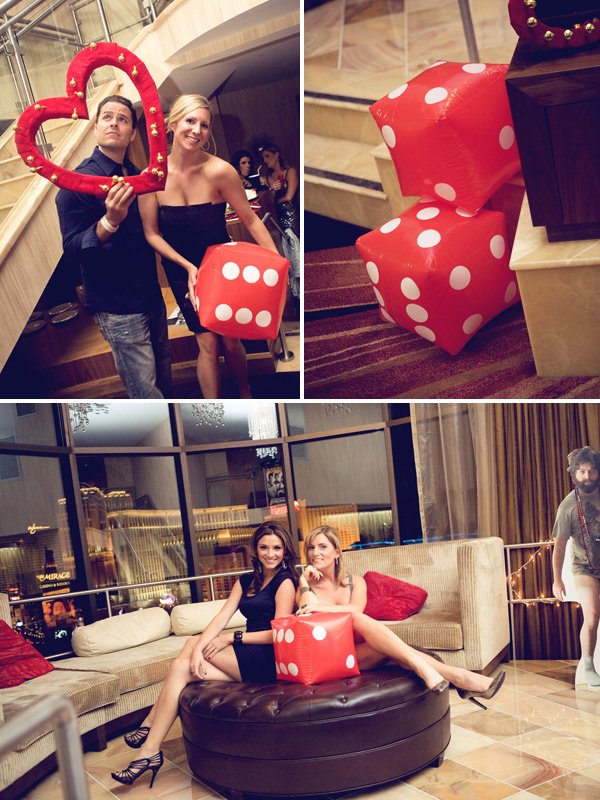 Something unexpected happened that was seriously the best surprise… our guests (and some other close friends that couldn’t make the trip) created a photo book for us that was filled with fun memories with each of them from the past 10 years and sweet letters/messages. I will honestly treasure this book forever! 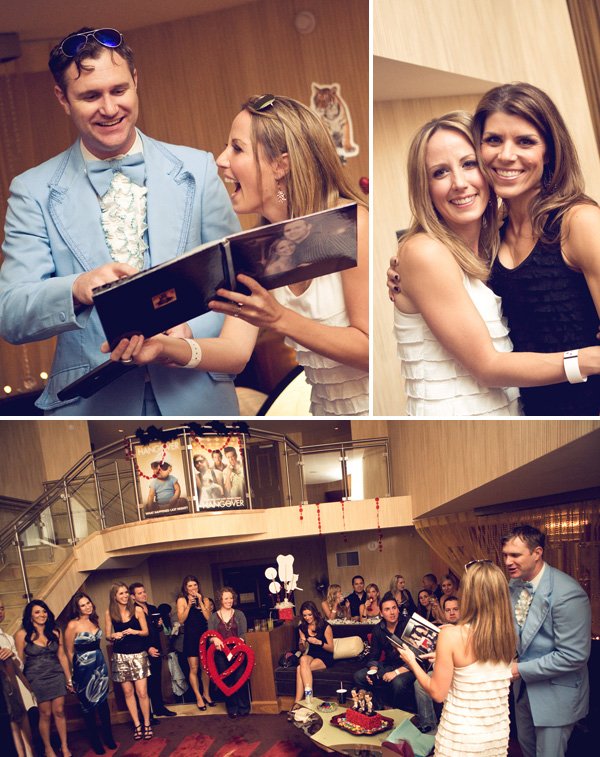 We played songs from the movie during the party, and of course there had to be a Jager toast for the guys before we headed out for the night – just like in the movie! 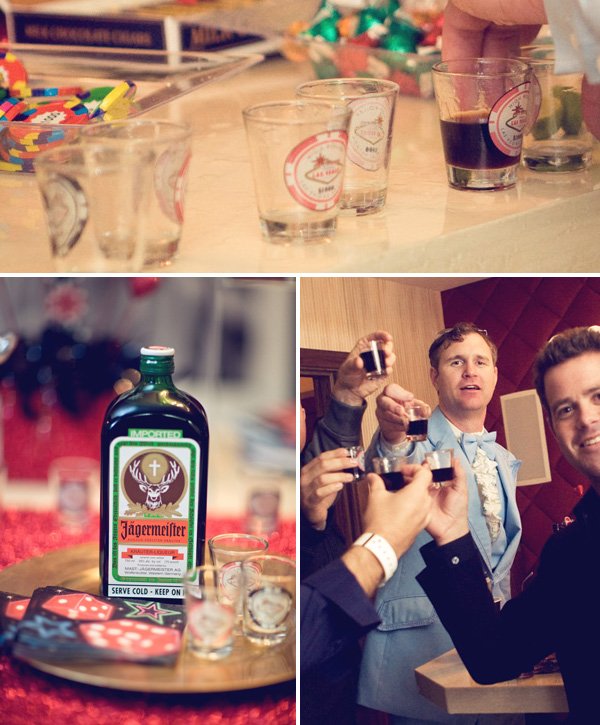 That’s it for the cocktail party… but it was just the beginning of our night! As for the rest of the evening, I’ll just tell you that it was a blast… and YES, I remember all of it! =)

Okay – I’m HANGOVER-ed out! This post took a lot longer than I expected… so I’ll have to prep & post the free printables/downloads this weekend instead of today. As they say in the movie biz… they are “coming soon“!