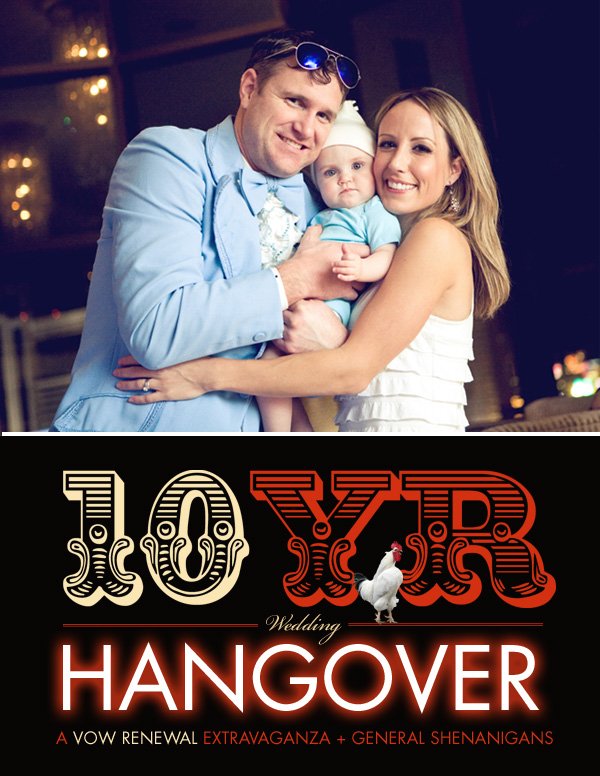 If you’ve been following HWTM for a while, you might have seen my previous post about the {pretty unconventional} idea that Sonny & I had for our 10-year wedding anniversary celebration this past November. We really wanted to do a fun/crazy/outside-the-box party that would include our friends, family, and daughter – for the early part of the night, at least! – and what a PARTY it turned out to be! I apologize that this post is longer/more wordy than usual – it’s just very near & dear to my heart, and I want to share all the little details!


Sonny is a goofball at heart (one of the things I love about him), and a funny type of celebration is really much more “us” than something formal, so we ran with it. We both love the movie THE HANGOVER, and thought that a Hangover-themed party would be so much FUN, with all the funny, off-the-wall details that could be incorporated like missing teeth, a tiger in the bathroom, the late-night wedding of Stu and Jane (vow renewal for us) complete with blue ruffle tux, that random chicken, festive Las Vegas elements, Alan’s crazy quotes…. 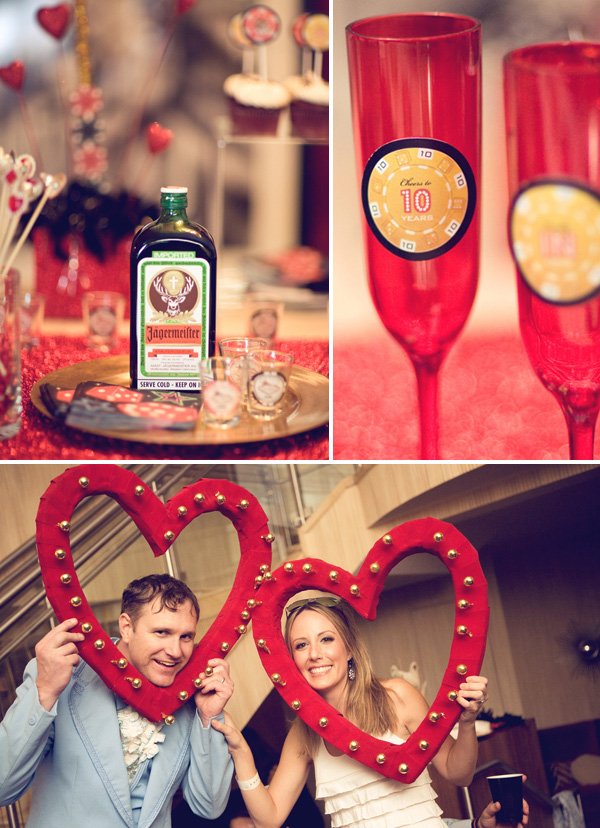 As San Diegans, we’re not too far from Las Vegas (about a 5 hour drive or 40 min flight), so we knew a Vegas trip – although more involved to plan – wouldn’t be out of the question. We ran the idea by our friends a few months prior, saw that a lot of them were on board for a weekend in Vegas… and cut to November 2010, we found ourselves at “The Real” Caesar’s Palace in Vegas, celebrating with 25 wonderful friends & family members, in the midst of what turned out to be one of the most fun nights of our lives! (And also very sentimental due to a touching surprise gift from our friends… more on that later.) 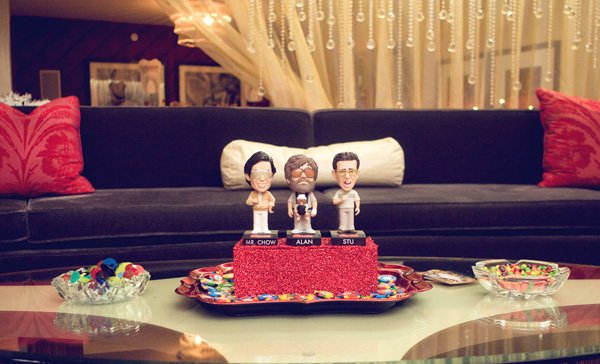 This is honestly a great theme for so many types of occasions – from light-hearted anniversary celebrations like ours to bachelor/bachelorette parties, milestone birthdays, and theme parties in general. The humorous element and “Vegas-y” fun put everyone in such a great mood!

So without further adieu, here’s Part 1 of the recap of our night… complete with LOTS of photos (as captured by Jeanna Hayes). I hope you find some good inspiration here if you’re looking to do something similar in the future! FREE PRINTABLES of all the paper elements that I designed for the party are coming very soon too! 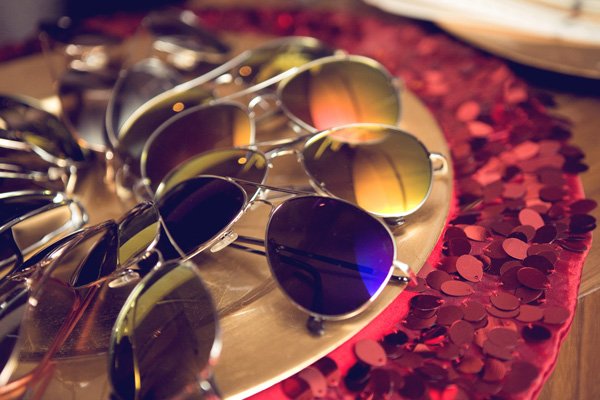 The first thing we needed to do was get the travel situation squared away, especially since the ideal situation would be for everyone to stay at the same hotel, so that required some planning.

Our first choice for hotels was of course Caesar’s Palace, just like in the movie, with the plan of renting a big suite as our “venue” to host the party. Luckily, we discovered that Caesars is part of Harrah’s, which has a travel service for their properties called Total Experiences. Working with them made planning the trip SO much easier. We were able to secure a room block – just like you would for a wedding – with special hotel rates for our guests that were significantly discounted from the standard hotel rates (hooray!). Added bonus, they put everyone all on the same floor as our party suite, with our rooms right next to each other!

And now onto the SUITE where the party was held. I’ve definitely never done Vegas like this before – it was a TRUE treat! =) 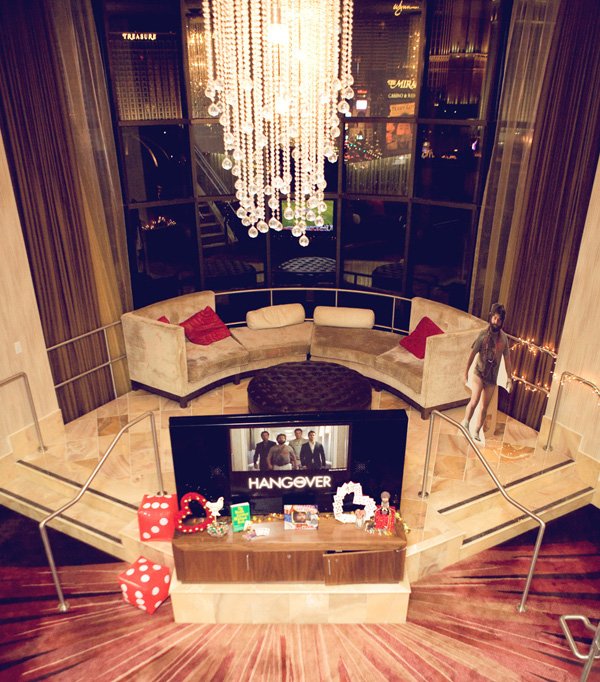 We also booked this suite through Total Experiences, and it’s dubbed “The Suite That Inspired The Hangover” – due to the amazing giant window & view of the Strip that was also seen in the movie. (The suite shown in the film was actually a movie set.) Not too shabby of a view, right?! 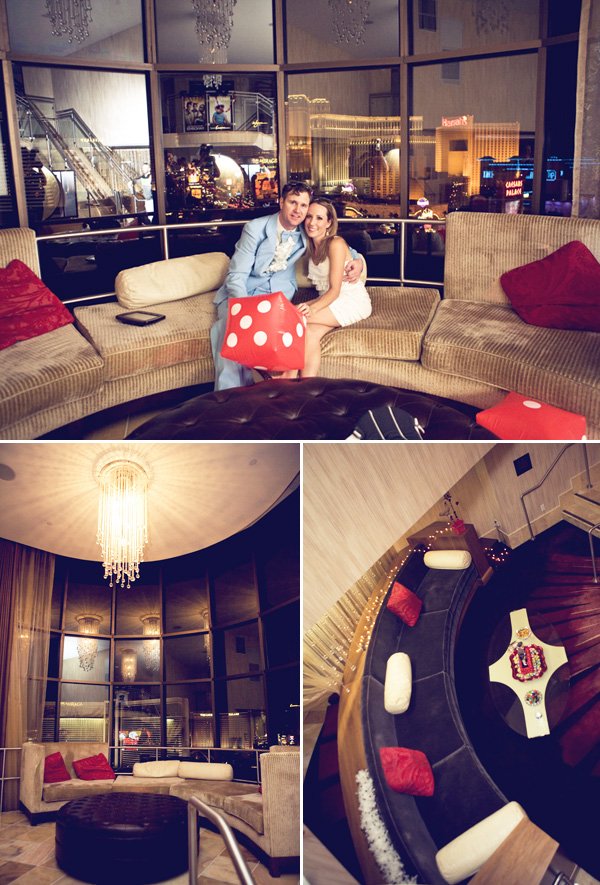 It’s a 2-story suite (2900 square feet!), with the entertaining area downstairs – complete with dining area & a small kitchen with a fridge & sink, which worked out great for the bar situation. There are dual master bedrooms upstairs that are HUGE! Some of our friends also stayed in the 2 adjoining rooms on either side of the suite, so it felt even bigger with those doors open! Here’s the view looking up from downstairs: 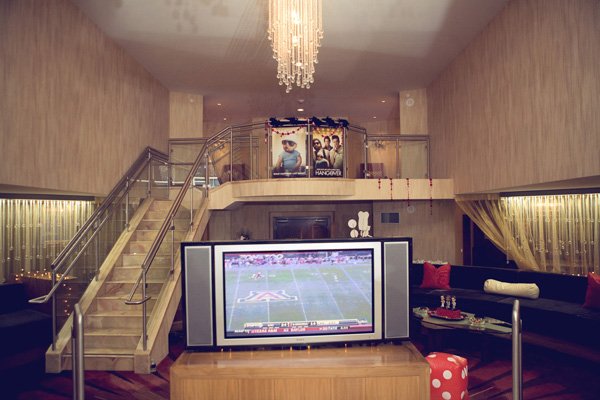 I just adored all the crystal details that were part of the regular room decor. 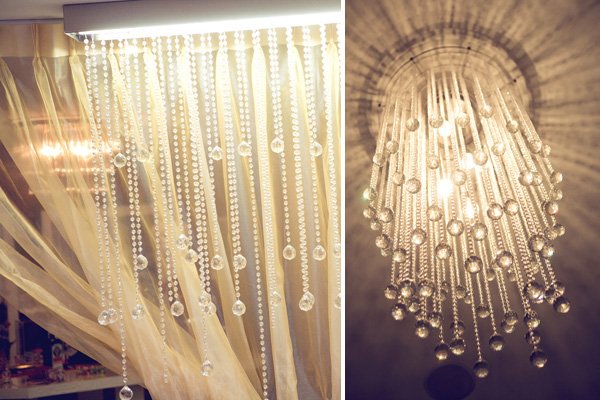 DESSERT TABLE:
I set up a dessert/drinks table in the dining area. There’s so much you can do with this theme to really take it to the limit, but truth be told, it was hard to go too crazy because we had to bring absolutely everything with us, so we were limited due to vehicle space issues. Our car was packed to the brim on the way there as it was (and I realized I forgot a huge box of props when we were halfway there! Sigh…) I’m still happy with how the table turned out though… 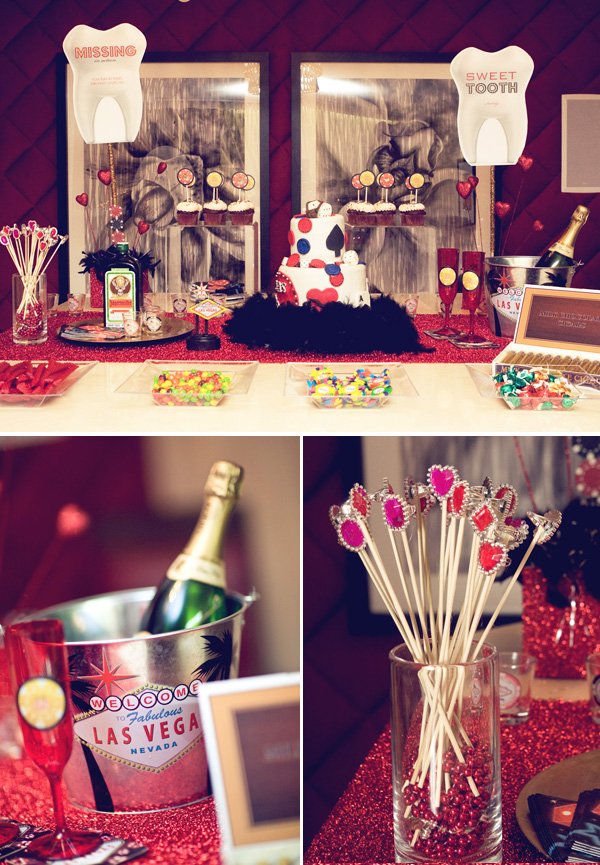 To tie in the wedding element, I created ring drink stirrers by hot-gluing plastic party rings (found in the kids party section at Target!) onto bamboo skewers and included 2 red acrylic toasting flutes (from IKEA!) next to a bottle of champagne chilled in a Vegas-themed ice bucket to play on the idea of a wedding toast.

The champagne flutes were embellished with a couple of the paper party circles I designed that were also used as cupcake toppers. There were 3 designs that read “Cheers to 10 Years” and featured pictures of tigers & chicken themed pocker chips. (Download the printable circle toppers here.) 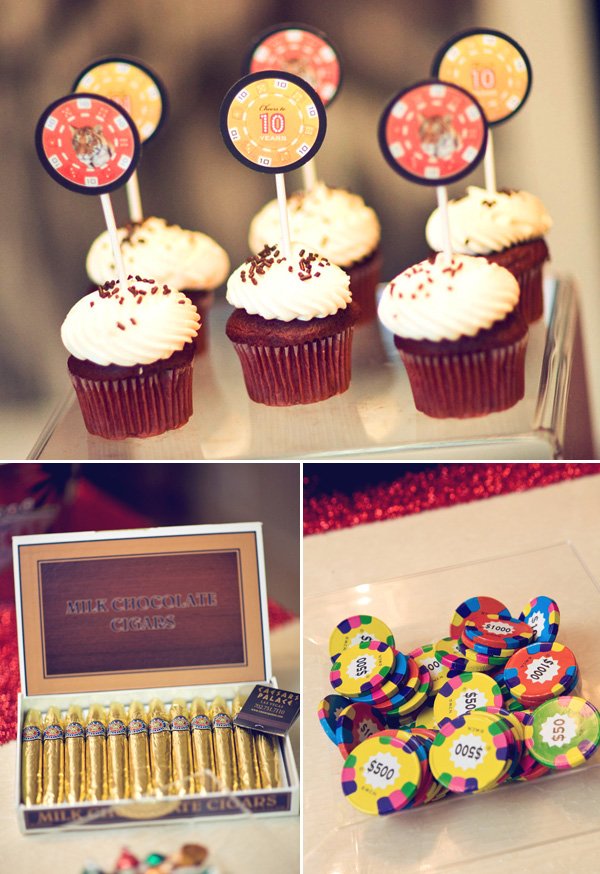 Chocolate Cigars and Chocolate Poker chips were from Sweets Indeed… and of course we had to have Skittles too! (another movie reference)

To play up the “Stu’s Missing Tooth” element from the movie and also tie into the dessert theme, I created giant tooth signs for the table that read “SWEET TOOTH” and “MISSING in action. Foul play by pliers strongly suspected.” (Download the tooth signs here.) 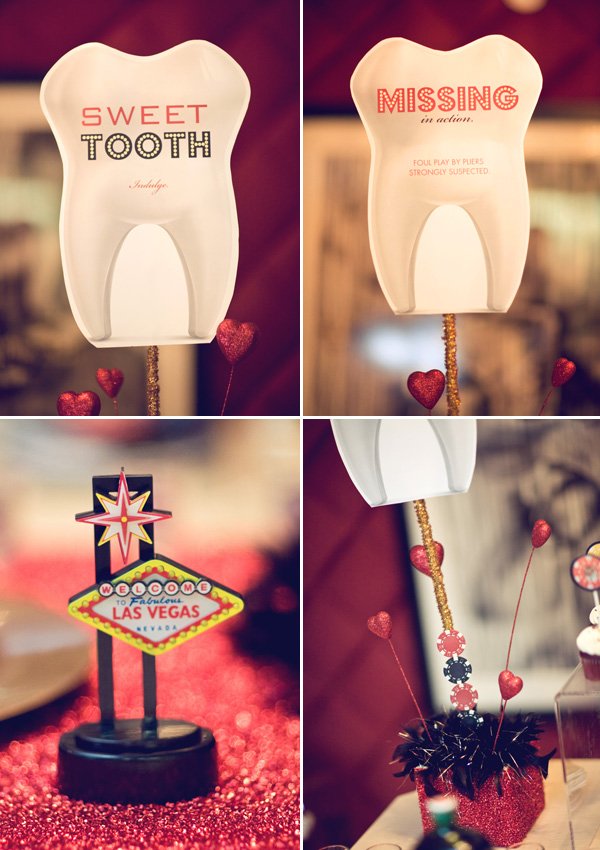 More on the other aspects of the tooth arrangements in part 2 – they tie into the rest of the centerpieces featured elsewhere in the party… Also pictured above: Mini Lighted Las Vegas Sign (lights not turned yet in the pic though!).

The dessert table also featured a Vegas themed wedding cake from Elizabethan Desserts, complete with fondant tooth and satchel toppers and fondant poker chips and dice! Now this was interesting to figure out how to transport all the to way Vegas & keep cool on the way! Dry ice, a huge Rubbermaid bin, and some strategic packing to make sure it was sturdy did the trick though. 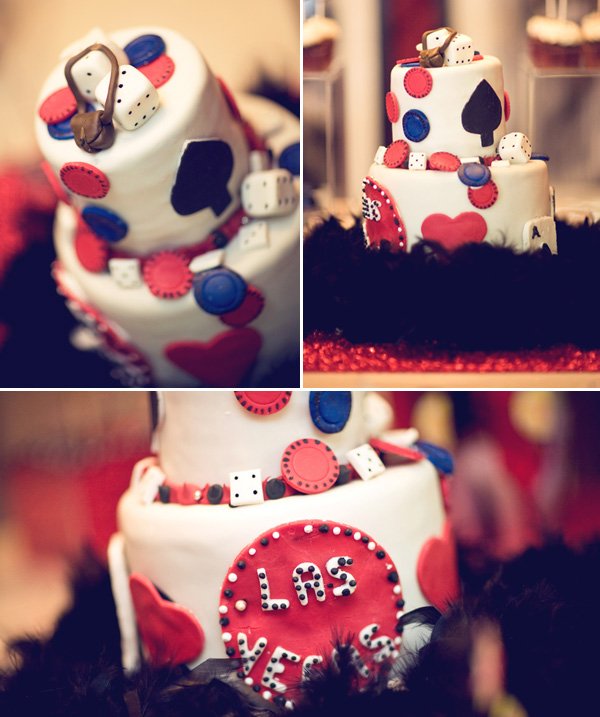 Of course we had to incorporate Jagermeister, to reference the key toast the guys did on the roof of the hotel in the movie. (No “special additives” in our Jager, though!) The table was also lined with shot glasses that featured the Vegas sign on a poker chip graphic and read “High Roller”. (I alternated the black and red shotglass designs. For some reason the red one is a little cheaper!) 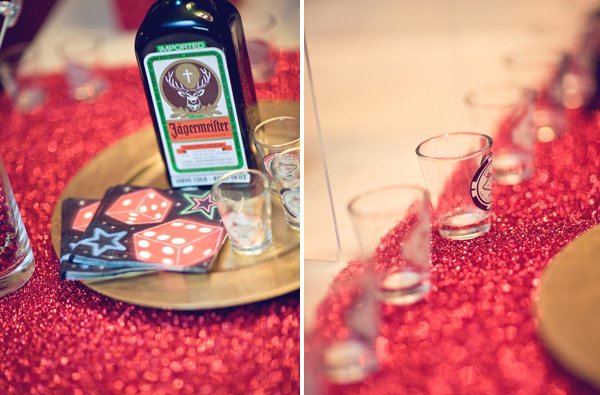 That’s it for Part 1 this morning! Part 2 coming tomorrow – which will feature the Party Decor, the invitation, and the all of the photo props – “Vegas Light” Hearts, hospital bracelets, Alan’s aviator sunglasses, and more! {Update – check out PART 2 right now! – and download the {free} printables used throughout the party right here!}

P.S. You can find even more info on the inspiration for the decor in my previous post here.