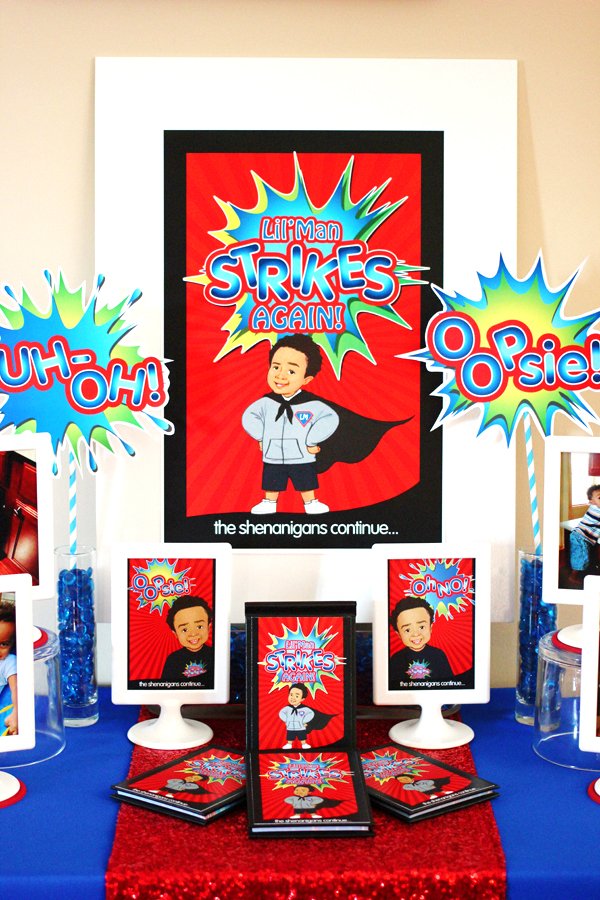 Tonya Coleman here from Soireé Event Design, and I’m back with the “Trend Alert” where I share with you some of the hottest trends in party planning! Today’s guest post is all about the hot new trend CUSTOM ILLUSTRATED PRINTABLES as shown in this unique “SHENANIGANS” party theme I designed for my son. This is the ultimate in custom parties as your child’s illustration is transformed into their own party supplies. 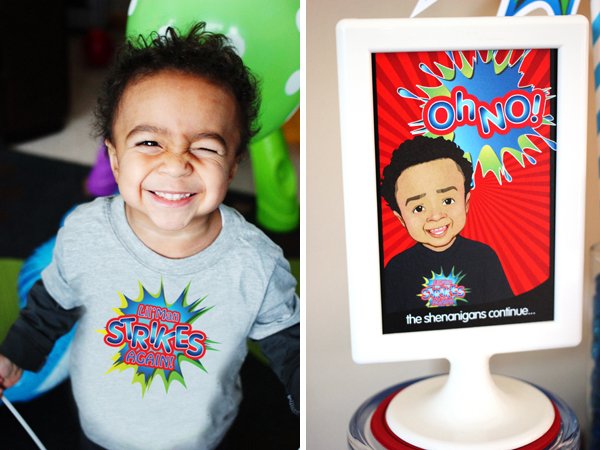 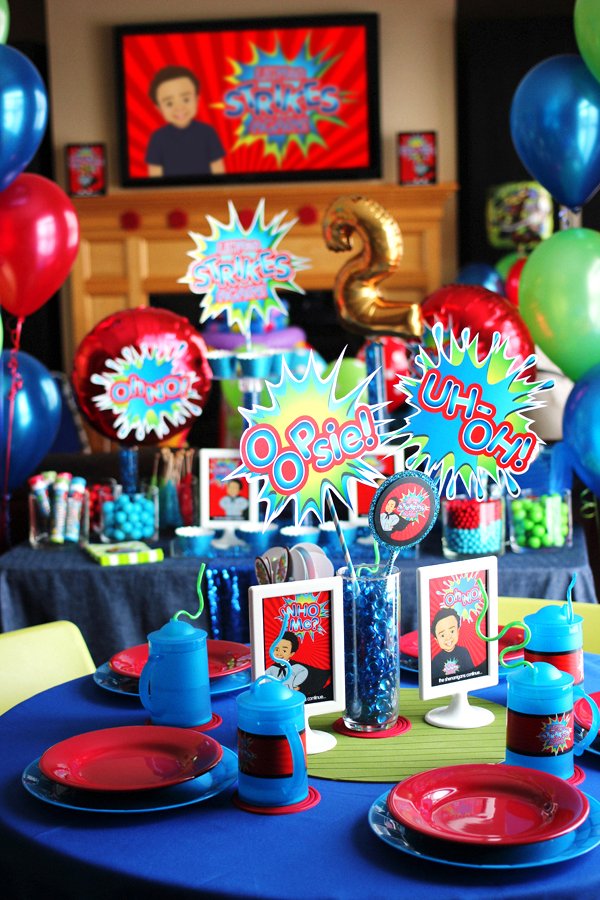 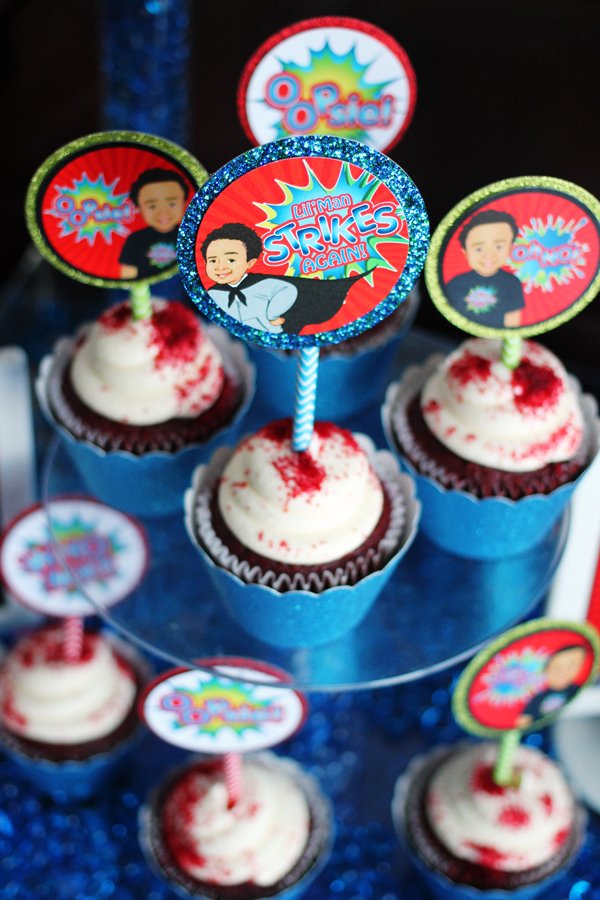 Something Chic Party & Design is at the forefront of this trend with their ortrait Parties (available in Cincinnati only). Simply book your party, give them a photo of your child and they will design a party using those custom illustrated party supplies. Earlier that year, I was lucky enough to win a custom illustration from them and used it to create a unique theme & printable collection for my son’s birthday party.

When trying to come up with a theme for this party, I looked back over the life of my soon to be 2 year old and realized that there was one common thread….SHENANIGANS! In fact, throughout the year, I documented his many shenanigans in an Instagram series, affectionately called “Lil’ Man Strikes AGAIN!” I knew right away that was it! I would create a party for him that actually CELEBRATED his SHENANIGANS! 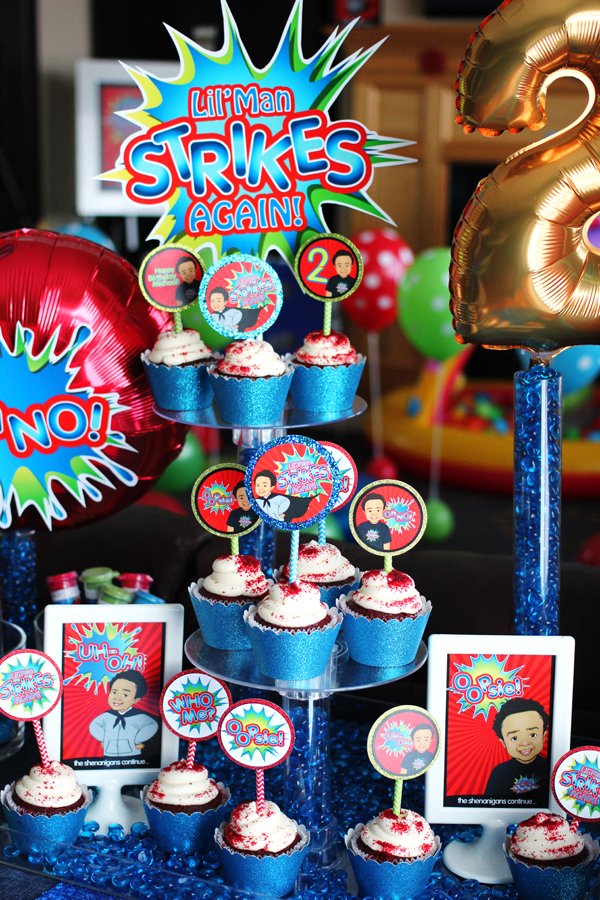 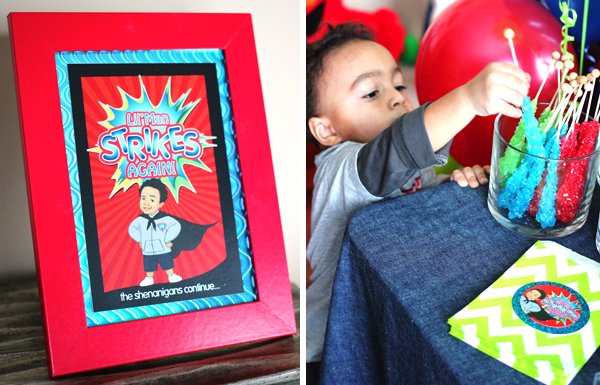 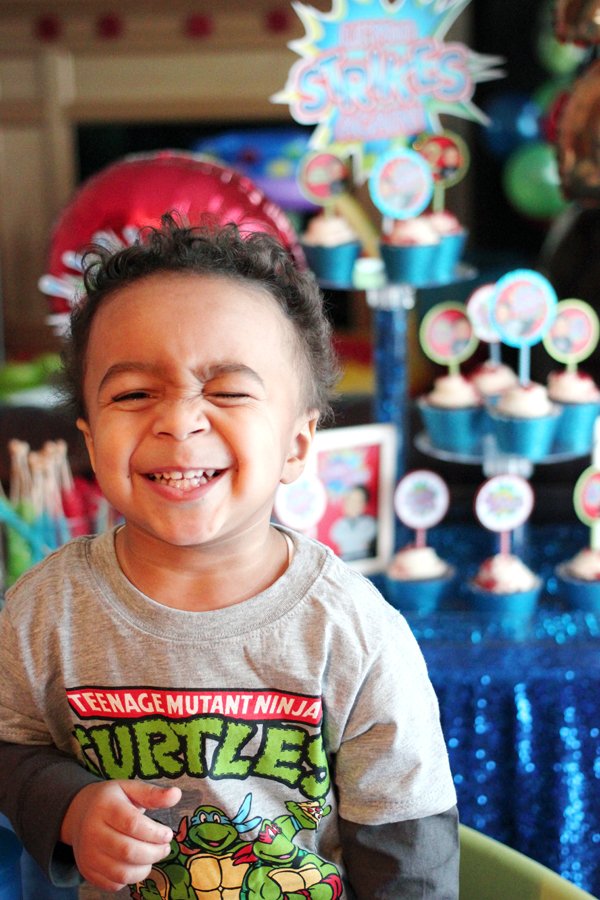 Winning the illustration from Something Chic Party & Design was a total score! I explained that I wanted my son to be illustrated as a “Shenanigans Superhero” with a black cape and sneaky expression on his face. The illustration matched my vision perfectly and even captured that sneaky “Uh-Oh” look he gives me when I catch him in the act. Once I got the illustration from them, I designed this “SHENANIGANS” printable collection with a superhero look and feel. To give it a unique twist, instead of the normal comic/superhero word bubbles, I used words that I heard A LOT all year long…”Uh-Oh!,” “Oopsie” and “Who Me?”  Want this unique printable collection for your child’s next party? It’s now available in our shop here for both boys and girls. Click here for all the details. 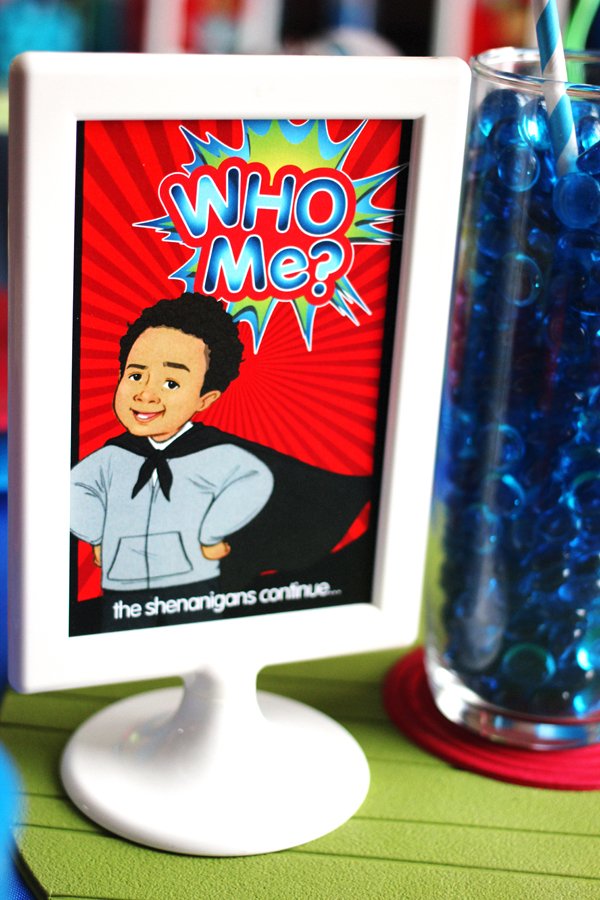 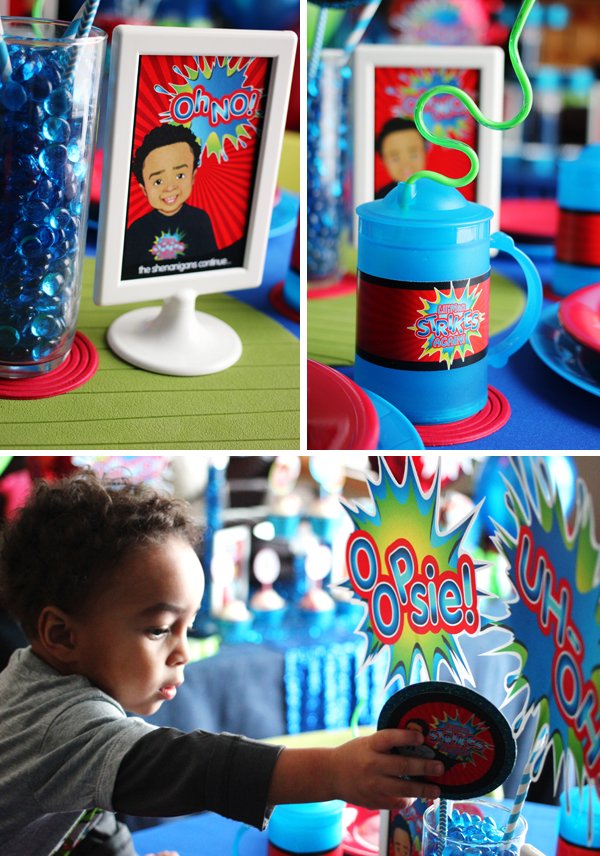 Royal blue, bright green and red were the colors I decided on. Okay, okay, I admit it. I am a sparkly kind of girl and love to include sparkle in all my parties. Which was okay when I was designing parties for my two daughters, but how could I sneak it into my son’s party? Well, how fabulous do these sparkly red & blue sequin runners from Koyal Wholesale look mixed in with denim and royal blue linens?! I also added glitter paper to the printable cupcake toppers, Lolli-tags™ centerpiece sticks and favor bag labels and wrapped the cupcakes in royal blue glitter cupcake wrappers from Dress My Cupcake. 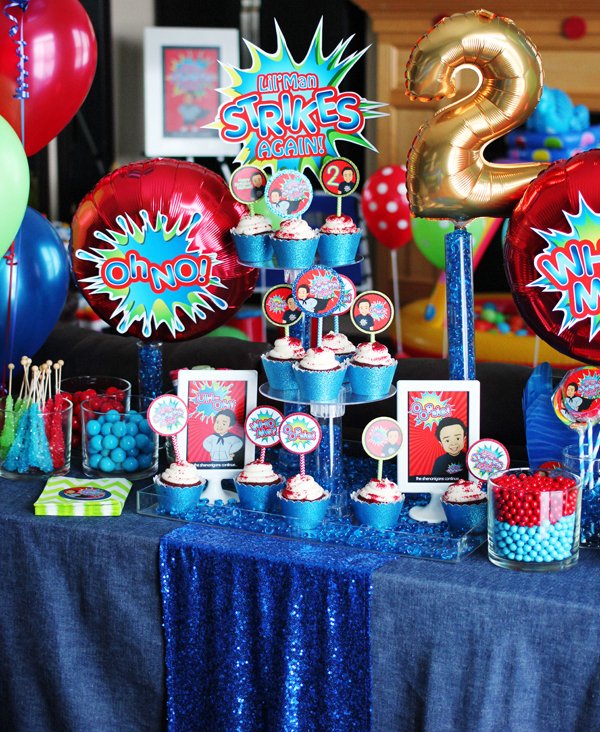 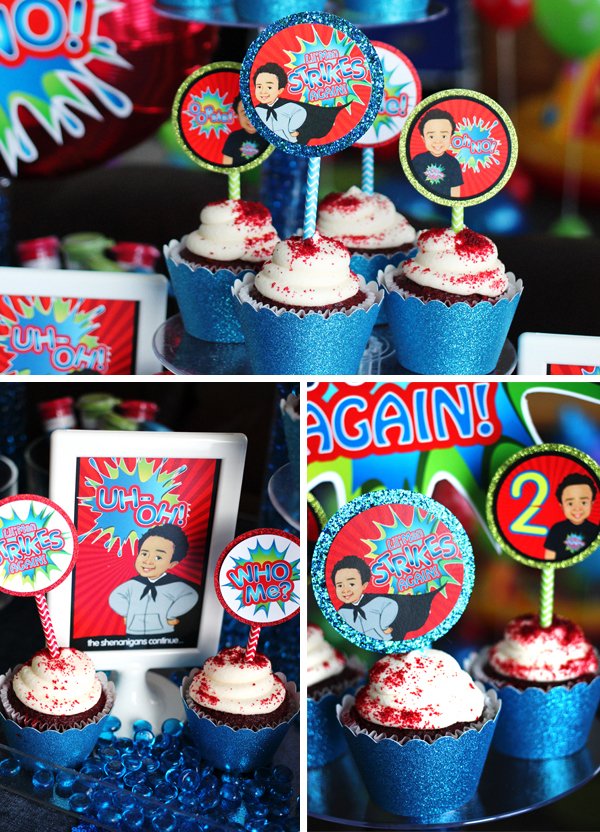 Printables were key decor elements to create the ruckus looking environment I was going for. I created oversized superhero/comic style word cutouts and use them in creative ways. I hand-cut them out, placed them on sticks and used them as centerpieces, a cupcake display topper and taped them to the front of air-blown balloons. The chevron print just screams ruckus doesn’t it? I thought it looked whacky and fun so I incorporated it into the party decor. The rainbow mix of chevron paper straws from TomKat Studio Shop had just the right amount of red, blue and green I needed to hold the printable cupcake toppers. A more economical choice than having to buy three separate bags of each color. 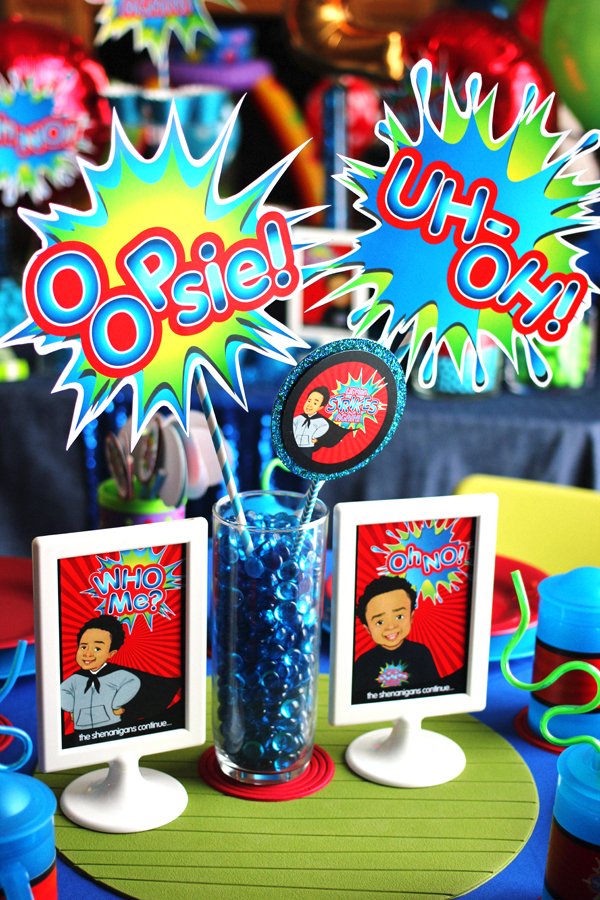 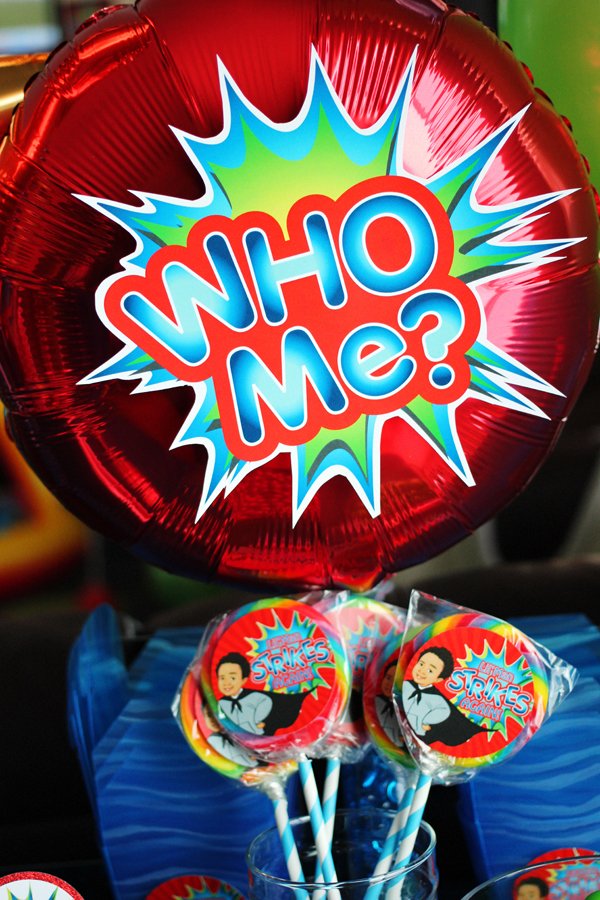 Want to see your child’s face light up with excitement? Just place a tray of candy and a plain cupcake in from of them and let them “play with their food.” The kids designed such creative cupcakes and had even more fun eating them! 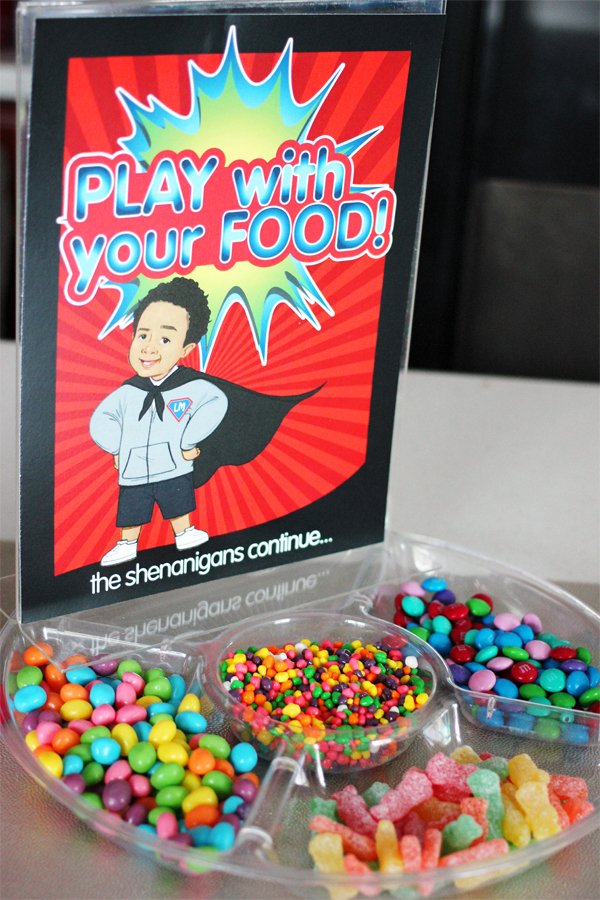 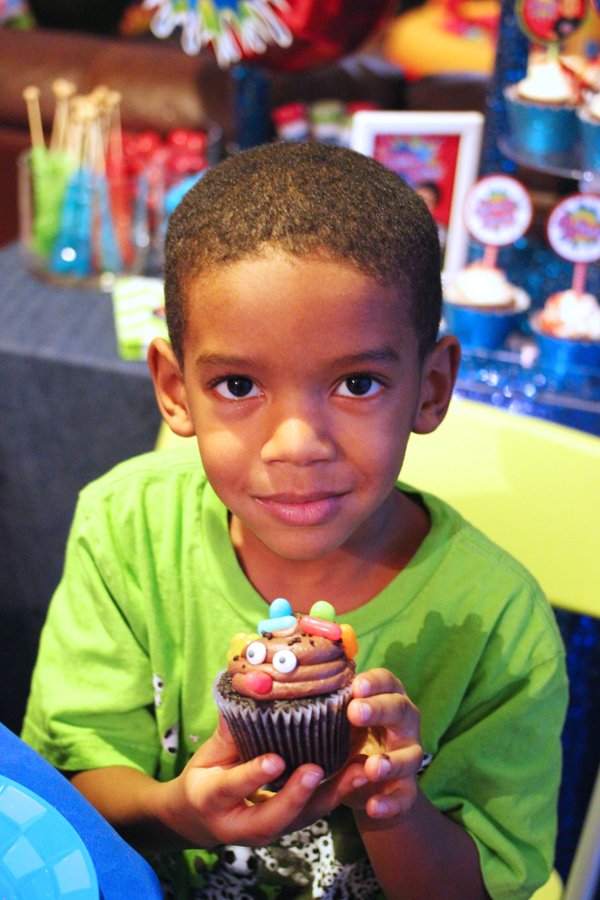 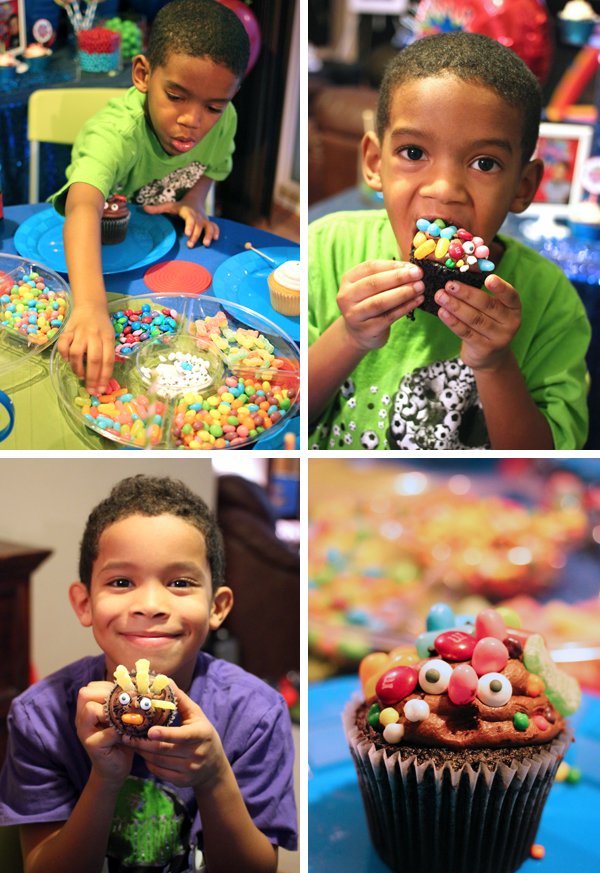 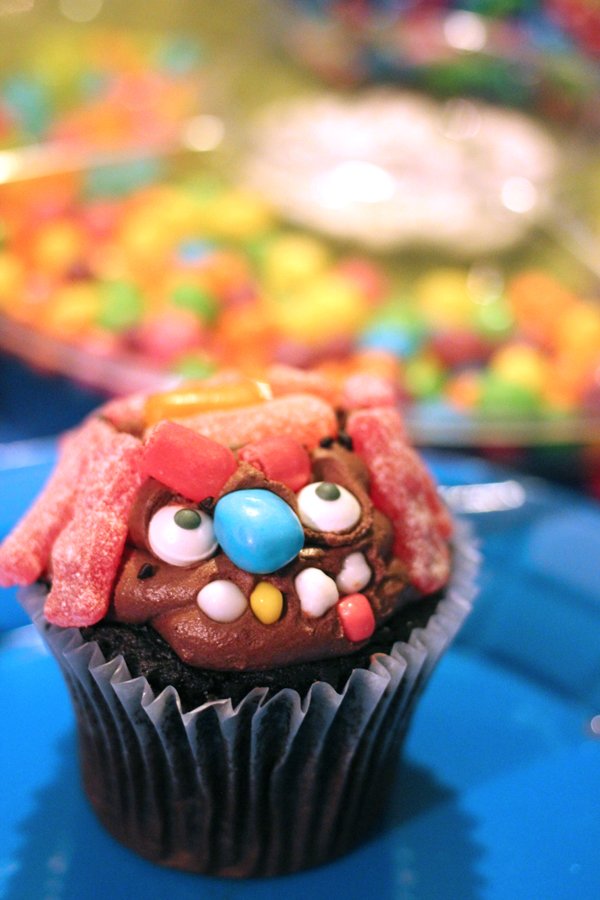 During the past year, I documented most of Lil’ Man’s shenanigans with my iPhone. What better party favor than this Shenanigans photo book full of the photos I took of Lil’ Man in action. Such a simple, yet one-of-a-kind keepsake for family members. The photo books were made at Target Photo in one hour! To customize the book I glued a printable cover to the front. The display table for these was the talk of the party — photos in frames of my favorite Lil’ Man’s shenanigans. 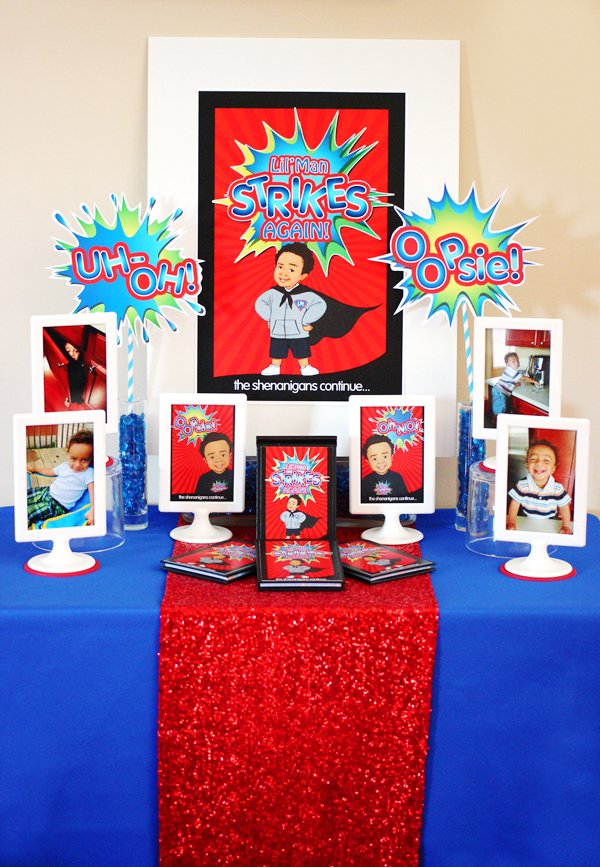 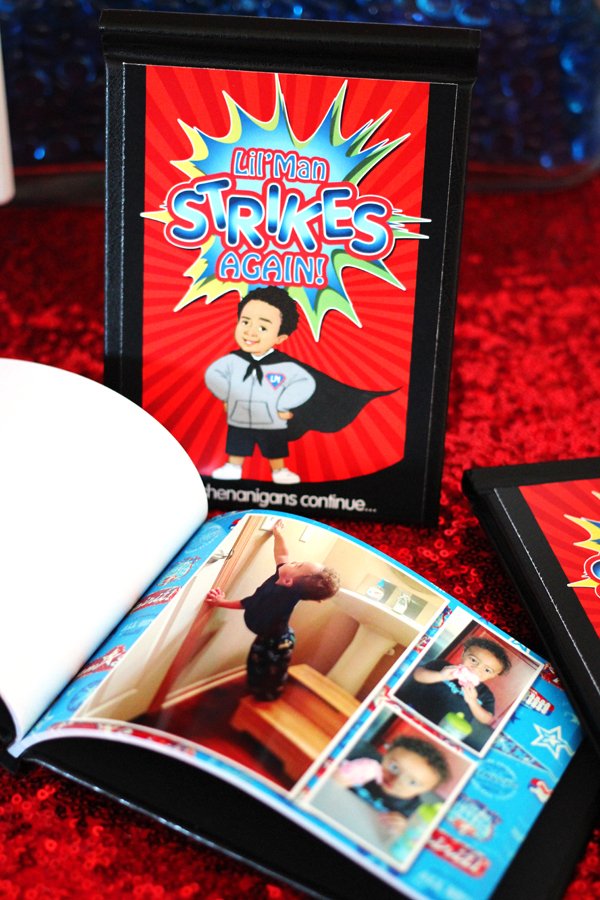 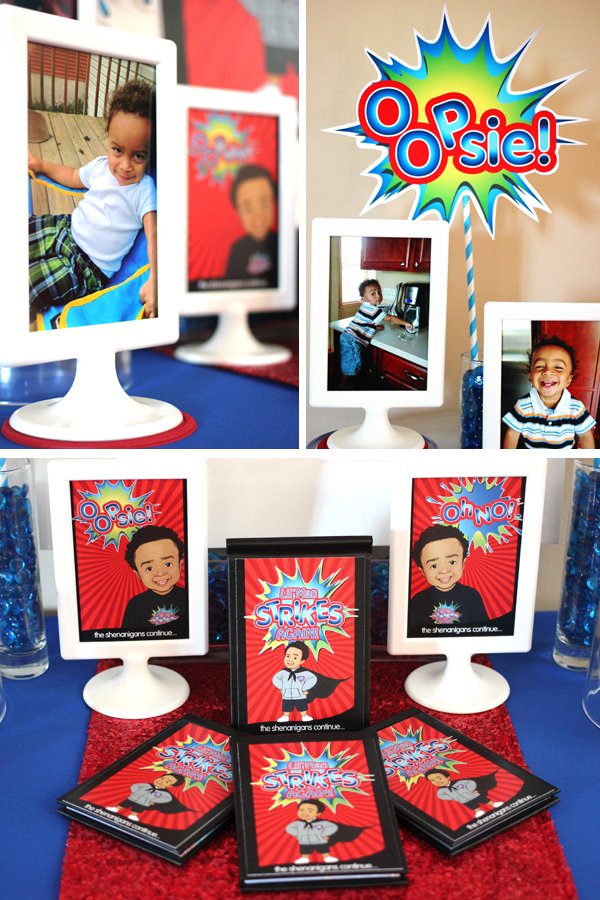 WANT TO SEE MORE SHENANIGANS PARTY PHOTOS? Click over to my blog here to see the “Cause a Ruckus” Game Zone and the “Sugar Overload” Sweets Bar!

About the Author: tonya

TONYA COLEMAN is a busy mother of 4 that ”LOVE LOVE LOVES” design & events! She has more than 10 years of experience in the entertainment business with a very successful graphic design studio & has been designing events for the past 5 years.

Soireé-Event Design is a fusion of Tonya’s graphic design studio and event boutique and specializes in upscale children’s events and bridal/baby showers – including their ”signature events”.  Soireé’s in-house graphic design studio custom designs all of the printable elements to make each client’s event truly unique and memorable… As Tonya explains it: ”We do all the work so that you can actually ENJOY your event and look like a rock star while doing it!”

Tonya’s celebrity design clients include Mariah Carey, Jamie Foxx, Magic Johnson, & Macy Gray, and her event work has been featured on several top party blogs & websites. In addition to sharing her tips and insider secrets on the Soireé-Event Design blog, she is an Event & Entertainment Editor for PlushLittleBaby.com. We are thrilled to share even more of her event design tips here at HWTM!